The Weekend Profit Navigator provides an in-depth stock market outlook for the week ahead.  Key trading levels for the indexes and the SPDR Sectors are provided with timely commentary to keep you on the right side of the trade.

Does the China deal mean anything? 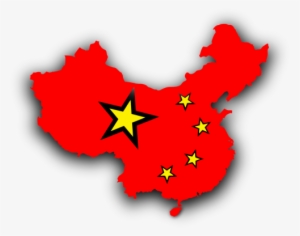 Do people think China is going to go 5x their historical purchases of ag products from $8B to $40B +++?  Is anybody going to do anything a year from now if China has only bought $20B of ag products?   Do traders think Phases 1, 2 and 3 will be all done prior to the election a year from now?  Luckily we don’t have to ponder the answers to these questions. Like earnings, all we need to do is interpret price action following the announcement and into the future.  Not saying doing that is easy, just saying its easier than trying to answer unknowable macro questions.  Let’s do it then.  Let’s look at how price behaved and identify the key levels for trading the week ahead.

Simply put, the weekly chart is bullish. Price is above the uptrend line off the June low and the indicators are above their centerlines.  A weekly close below the uptrend line would be the first signs of the chart beginning to break down. A breakout above resistance would be bullish and signal higher intermediate term higher prices.  Although not specifically noted on the chart, notice that while the indicators are in their bullish regimes, both RSI and PPO have been fading since the Jan 2018 high showing long-term bearish divergences. 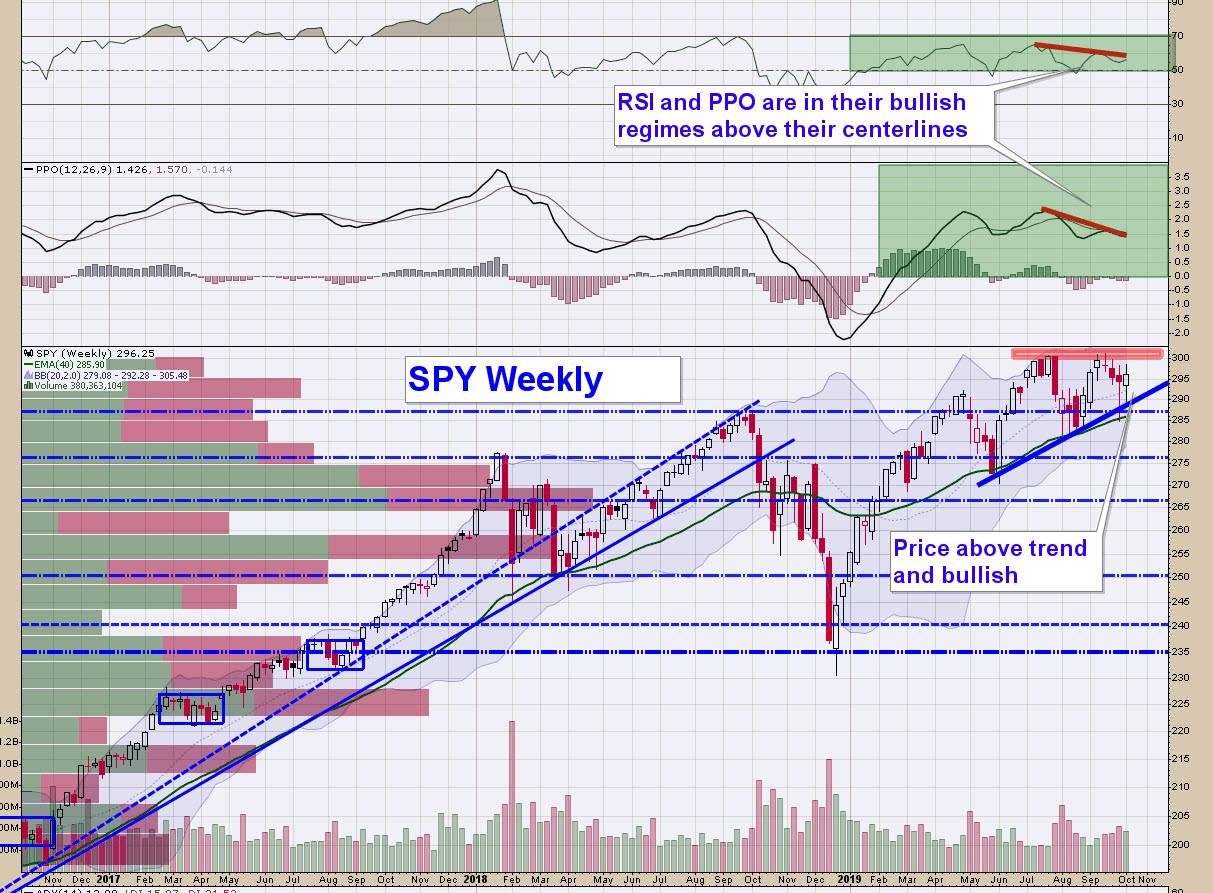 Price put in a big gravestone doji which is a bearish reversal candle. A red candle on Monday would confirm a near term reversal is underway with a target being a gap fill to $293.  A green candle, depending on how big it is, would chip away at the bear set up.

I wrote a blog post specifically on how to trade the gravestone doji on SPY with specific levels and strategy.  For further detail, please refer to that post HERE 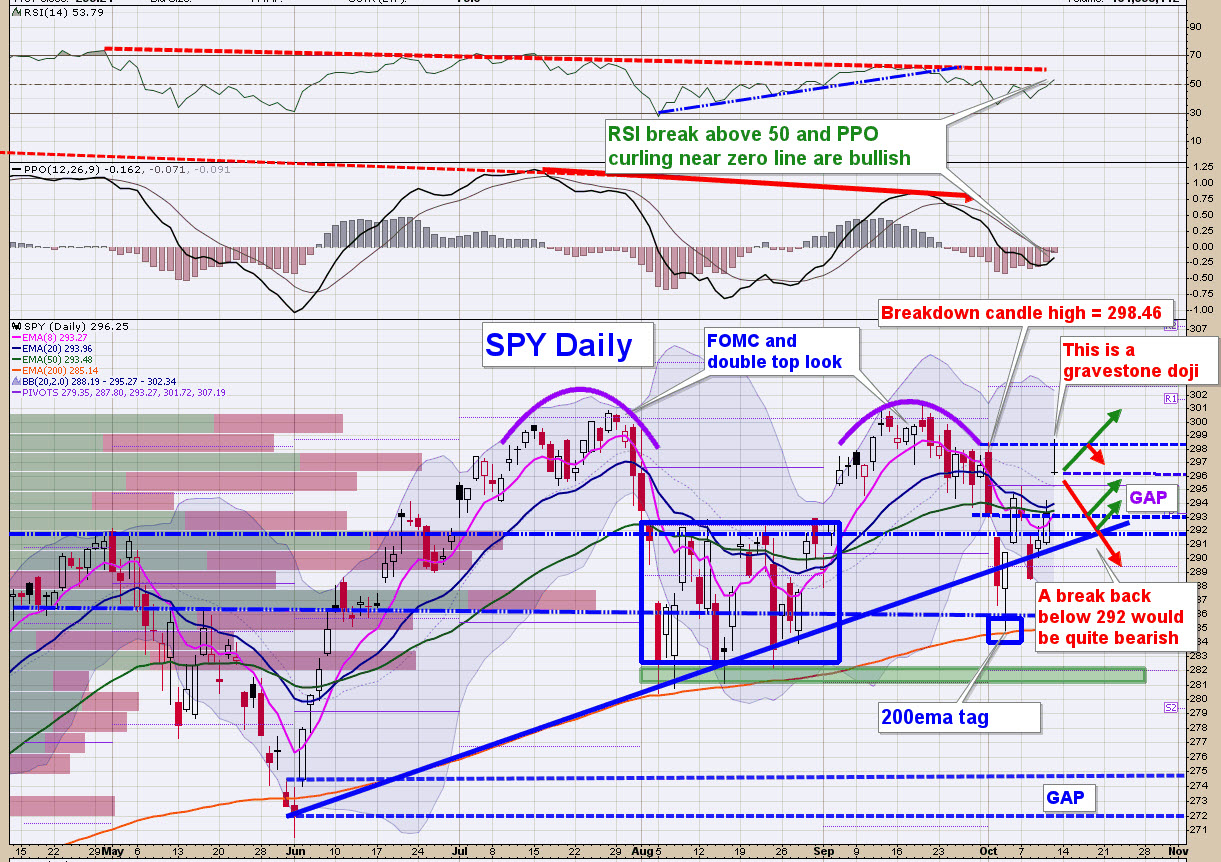 Bull Set up:  As long as price holds Friday’s low bulls can remain long. New bulls can use $296.25 to shoot against on the long side with a target at Fridays high near  $298.75.  A break above Friday’s high would be an objective place to either add or initiate a new long position with $301ish being the target.

Although like SPY the RSI and PPO have long-term bearish divergences in place, the chart as it stands is bullish. Price recaptured its uptrend line and the indicators remain in bull mode above their centerlines.  A break and close below the uptrend line would be the first signs of concern for bulls on the weekly chart. 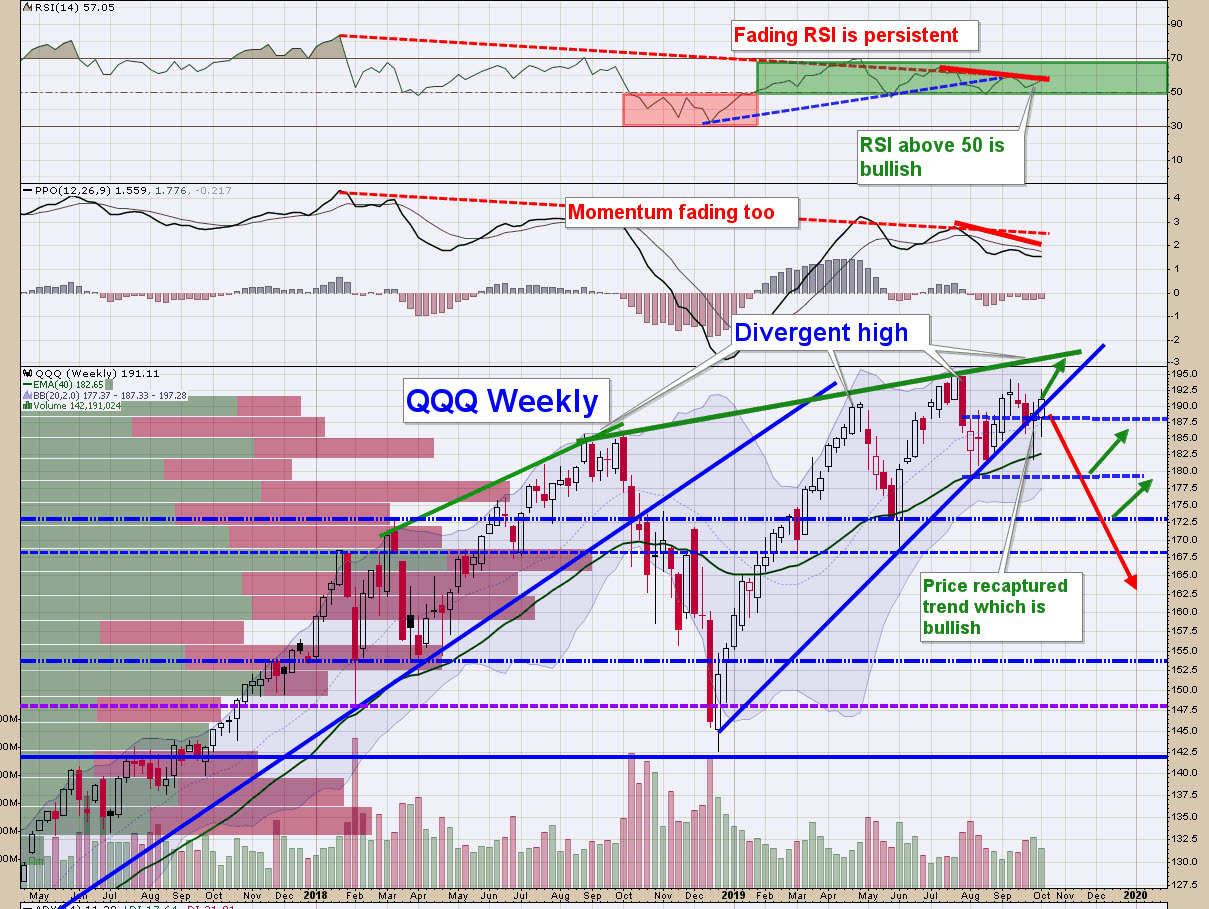 While Friday’s candle isn’t as textbook a gravestone doji as SPY, there was selling pressure into the close and in my opinion the trading methodology for Monday should be the same as it is for SPY.   Simply put, a close below Friday’s low at $190.80 is bearish and would likely mark the beginning of a short term reversal to fill the lower gap which would fill at $188.68.

A close above $190.11 would be bullish and would chip away at a bearish reversal scenario.  A break above downtrend resistance at $192ish would favor a run at new highs. 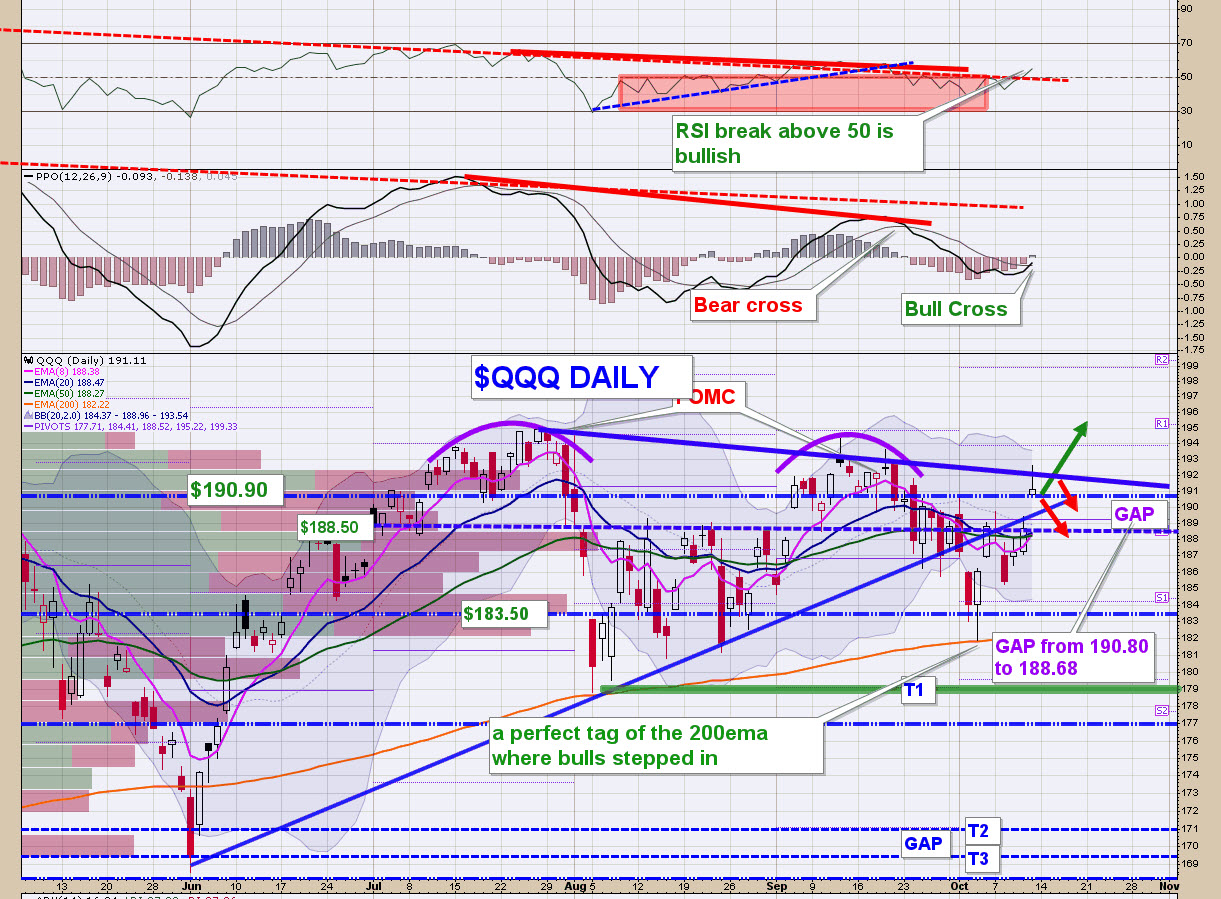 Bull Set up:  As long as price holds Friday’s low bulls can remain long. New bulls can use $190.80 to shoot against on the long side with a target at Fridays high near  $192. 60. A break above Friday’s high would be an objective place to either add or initiate a new long position with the prior high at $193.81 being the target.

Aside from the disaster that was December, price has been in a $12 wide trading range for a year. Now price is squarely in the middle of that range.  The width of the range is predictive of the eventual future move.  A break above the range targets $12 higher while a move below the range targets $12 lower.  Longer term traders who dont want to fight in between can mark those levels. Once you get the breakout / breakdown, “go with price” with a stop nearby. 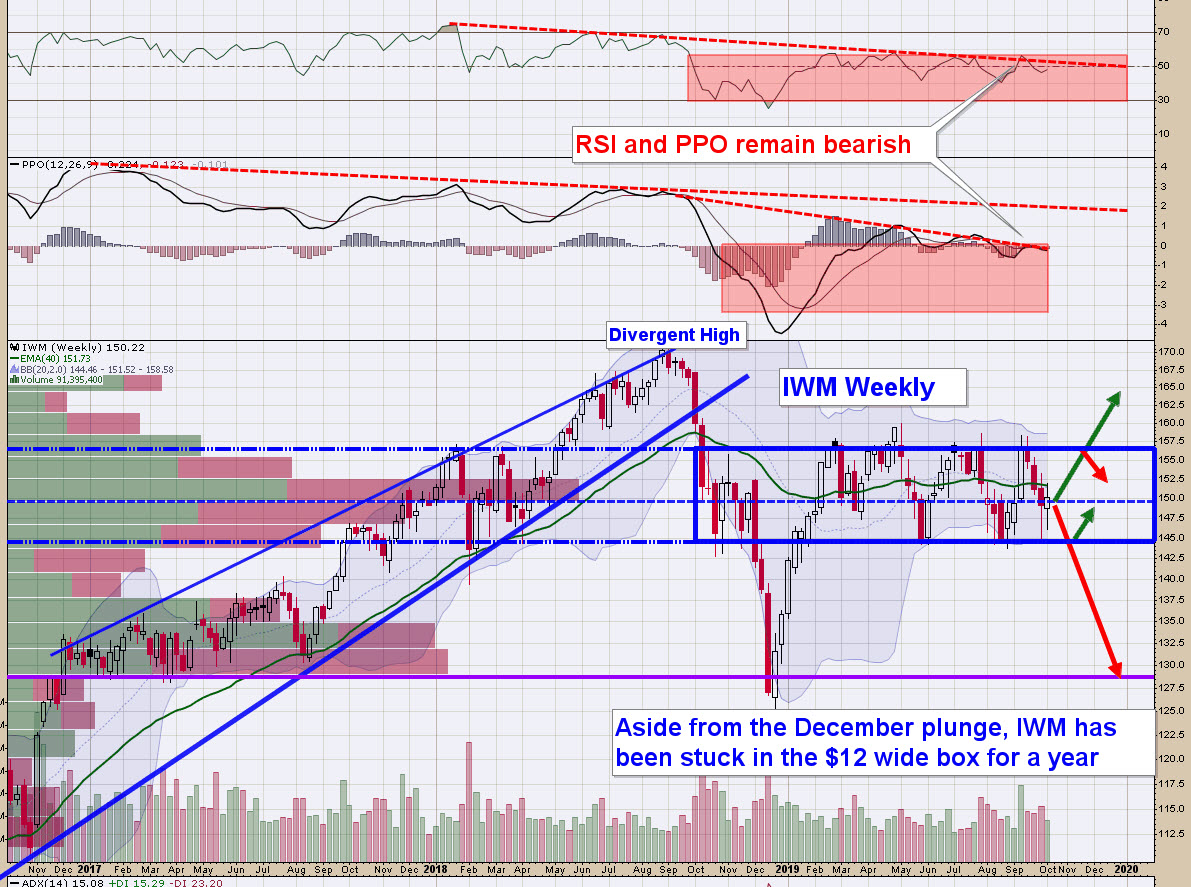 On Friday there was a “fake print” on the lower tail of the daily bar. Consequently the chart is messy and not conducive to a clean look so I am going to skip it.  for your own edification, look at a lower time frame chart. You’ll quickly see price did not go lower to fill the gap.

Bull Set up:  As long as price holds Friday’s low bulls can remain long. New bulls can use $149.79 to shoot against on the long side with a target at Fridays high near  $152. A break above Friday’s high would be an objective place to either add or initiate a new long position. THat said, there is significant OH resistance at $152.50. Conservative traders may want to hold off on adding or starting new longs until $152.50 is taken out.

What are the Oscillators saying?

The McClellan oscillators for both the Nasdaq and NYSE both rebounded from over sold postures from last week to a neutral state.  I find these to be helpful at the extremes where “fighting NYMO” becomes dangerous.  No big take aways this week here.  Free to go higher or lower but nothing to trade off of. 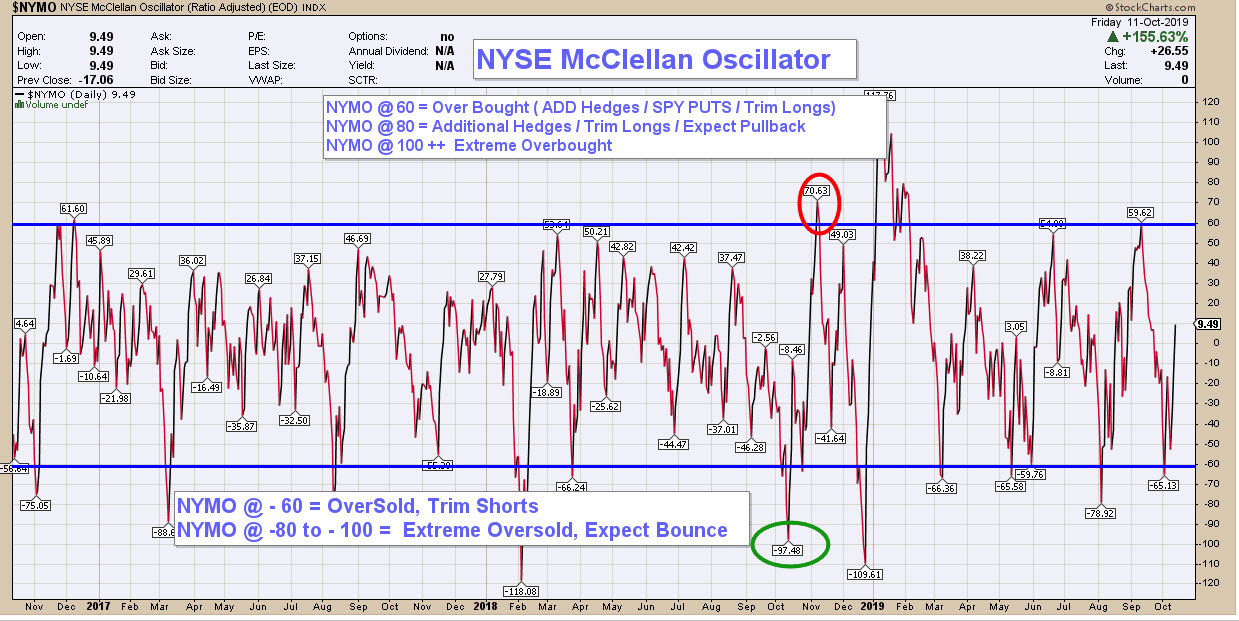 By these measures the recent up move in equities was confirmed with all measures shifting higher. 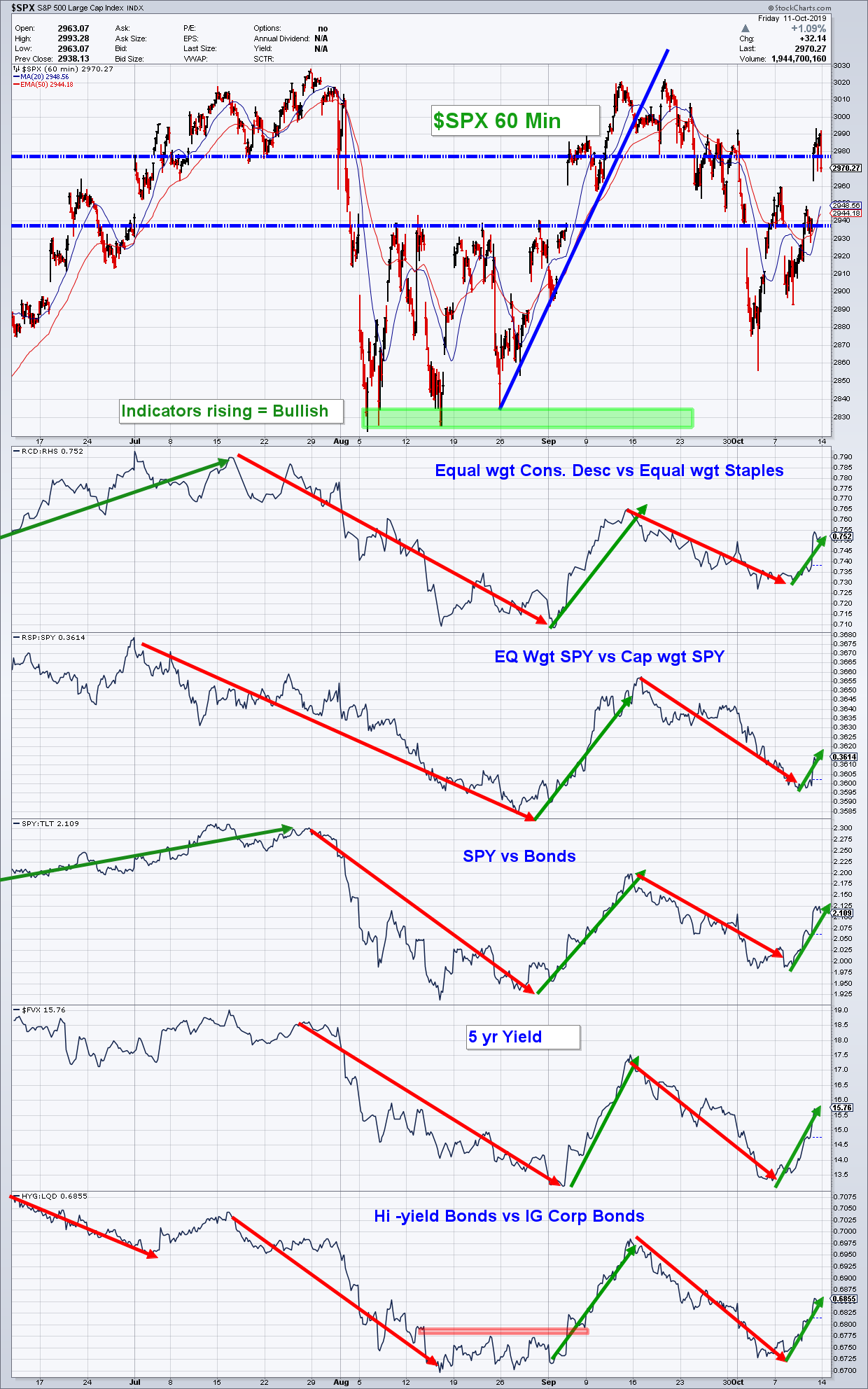 Sector / Asset momentum can be a useful tool to decide where a given asset is on the momentum spectrum and how it compares to other assets / sectors.

In the studies below, the KST momentum profiles of the SPDR sectors as well as other instruments are give. You interpret the KST the same as you would for PPO or MACD.  In these graphs, the red line is the signal line.  Bull and bear crosses indicate increasing or decreasing momentum as does the slope of the curve.   Readings above the centerline are generally bullish while readings below the centerline are generally bearish.  Just as one example, look at Gold.  You can see the upswing, plateau, and eventual fade of the momentum.  If / when the KST puts in a bull cross at or near the centerline, it will be supportive of a move higher in price because momentum is returning.

FYI – The KST indicator was developed by Martin Pring. It combines short, medium and long term momentum in one indicator. 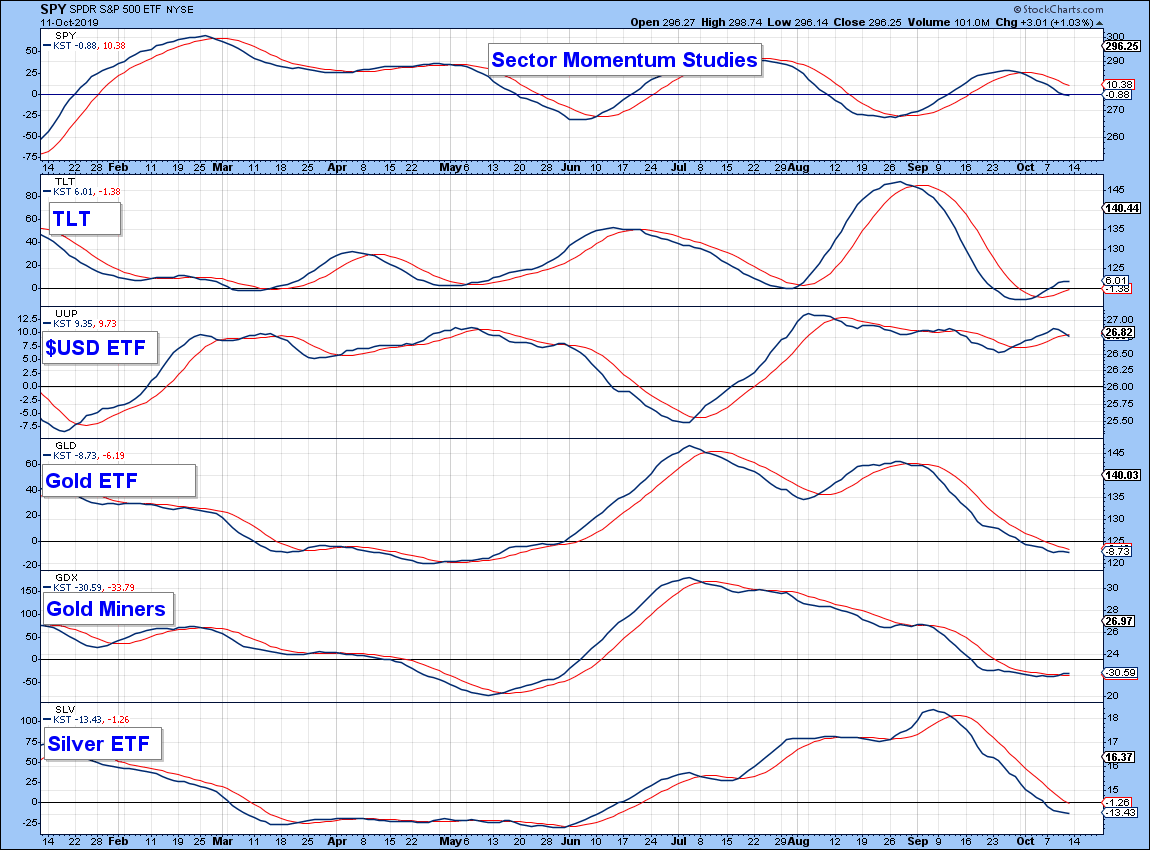 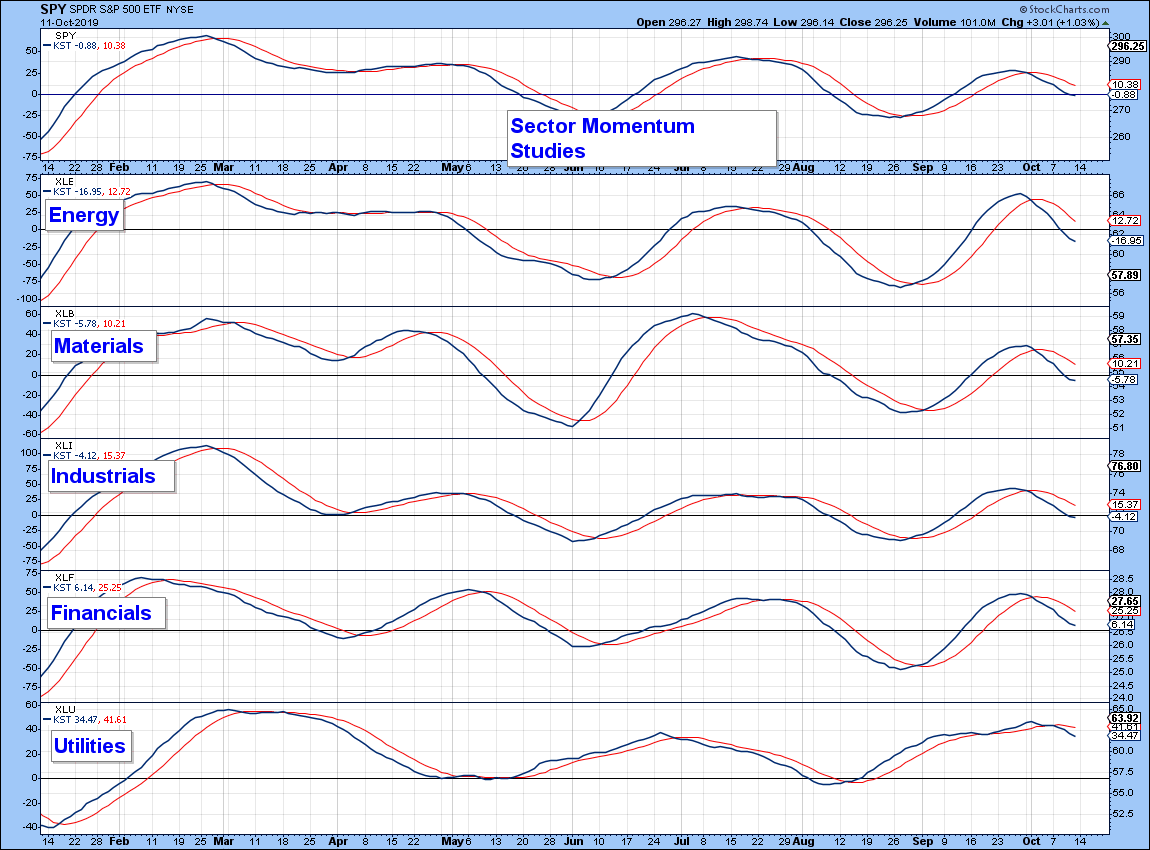 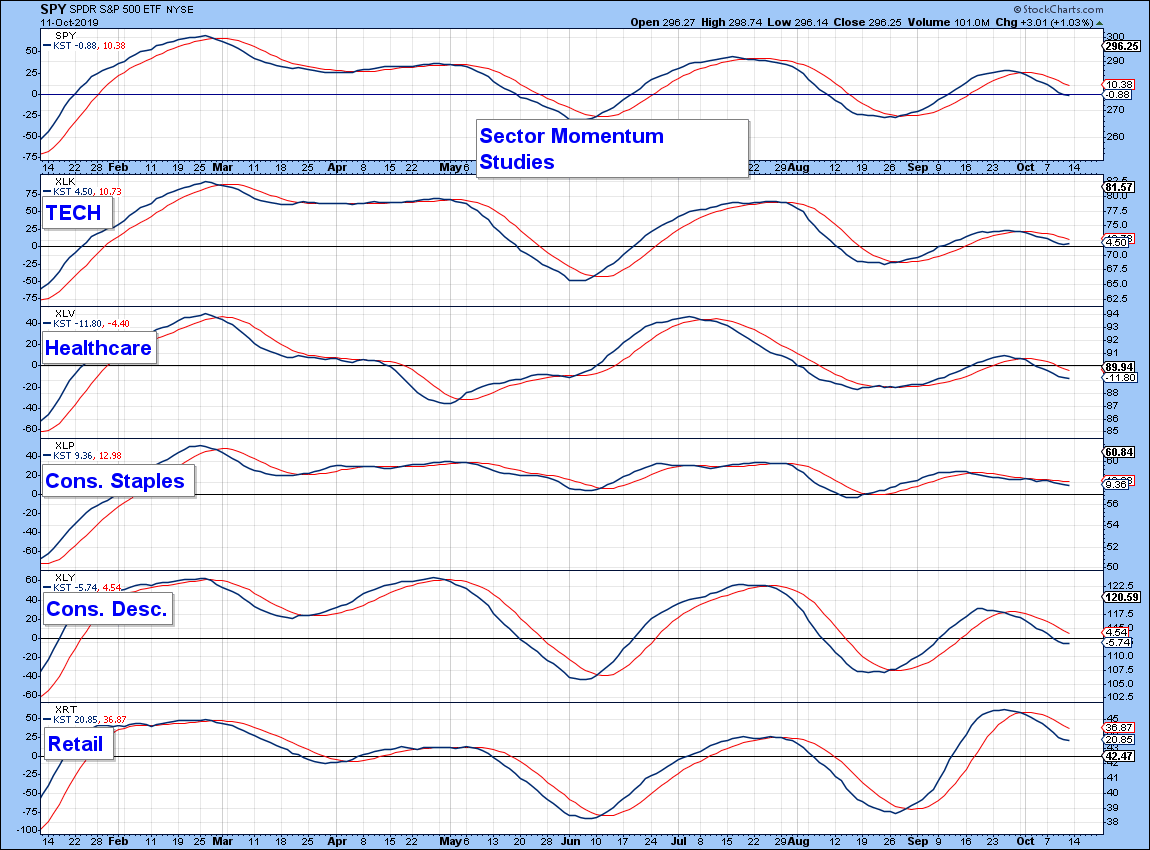 I want to leave you with a chart of financials. While SPY and QQQ both closed weakly on Friday, both also managed to hold its opening gap.  The financials did not.

The close below the open and in the gap below marks particularly weak price action and now favors a move to fill the gap below. The big banks begin reporting this week. It will be interesting to watch the price action as this new information is revealed.  Listen to what they say, but watch how price reacts. That is the key.

Looking at your charts

As you cruise your charts, pay close attention to how the day closed in relation to where price opened.  Be cautious if they look like the XLF example above where the closing price was lower than the opening price.

If however price remained near its highs or at the least above the open, it would show relative strength. Obviously the higher the better. Use the opening price as your stop.

As general guidance, if you bought a stock on Friday into the rally, and for any reason, price drops below the opening price ( not your entry ), I’d exit the trade, especially if the open was a big gap higher.  That particular set up would favor a continued move lower.  This of course is all trading stuff. If you bought something Friday based upon factors other than pure price action, feel free to disregard my comments.

Each week, I sift through hundreds of charts looking for compelling, objective, low-risk  trading opportunities and send them to members of our group. Why not join us?  It’s FREE.  Registration takes less than 1 minute HERE

Hope to see you soon!