Inspiration – Shut up and Stop Thinking so much

In the Twitter Universe of “look at me and what I have to say” coupled with a mindset ingrained from an infantile age that if you are not getting the result you desire you either don’t have all the information or you are processing it incorrectly, is it any wonder that we struggle as traders.  Evidence is piling up that we would be much better off emulating the average 5th grader in our trading than searching far and wide for hidden indicators and people of Twitter to follow.  Why? Because an average 5th grader’s thinking is unadulterated and pure. No fear of success nor of failure. No overlay of comparisons to other traders whom promote their last “killing” but fail to mention getting “run over”.   No relentless gathering of information that often only clouds our judgement with conflicting signals.  Do you have any whisper of doubt that if you showed a 5th grader support and said “BUY HERE ”  and resistance and said “SELL HERE”  that they could not do it?  Of course they could do it. In fact they could do it and would do it over and over again.  Yet we can’t or don’t.    I think if we shut up, then quiet our minds with less searching and thinking, we will make great strides in our trading.  The next time you face a decision for a trade ask yourself the question “What would a 5th grader do?”  If it’s too complicated for a 5th grader to answer, it’s too complicated for you.  If you can however answer the question, do what a 5th grader would do.  My bet is that it will be a better answer than we could come up with.

I ran a mid-sized tropical plant nursery in Homestead, FL for 25 years. I had 2 near death experiences I want to share that have striking similarities to this Corona episode.

In both cases, even though the reasons were widely different, our response function was remarkably similar.

Tie in to the Corona Episode and the Post-Corona World

$SPX closed below key support which was the December 2018 low. Exactly zero support levels have held thus far, none.  The door is open for a move to the 2016 breakout level 2100 – 2150.  Really not far away at all in the whole scope of things. Unlike a couple of weeks ago where $NYMO was deeply oversold, now NYMO has relaxed to -51.  There is room to the downside on the oscillator to go lower. On the bull side, price needs to recapture $240 to begin the repair process and recapture $250 to encourage participants to think a bear market rally is underway. 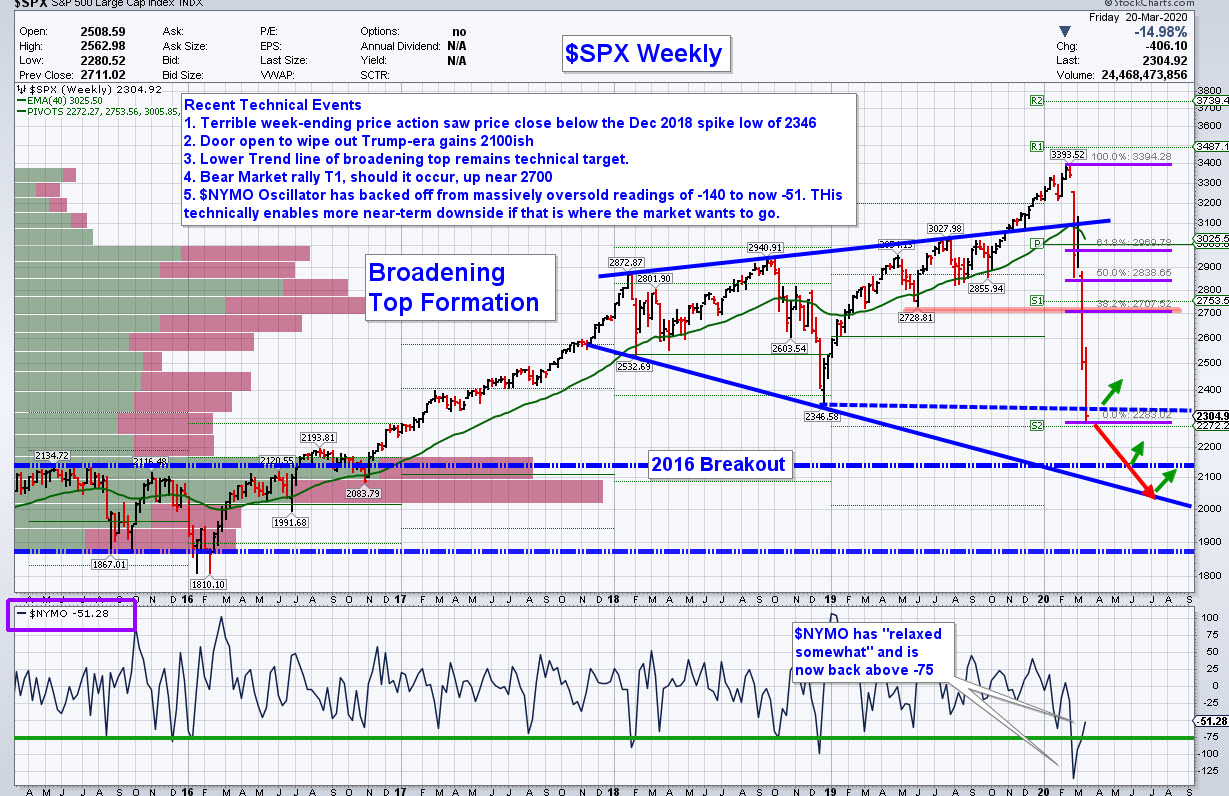 Horrible price action on Friday has price below key resistance at $235 and the downtrend line. While below both, stay short. If price breaks above both $235 and the Downtrend line you can be long against $235 for a potential rally that could see price find $272 / $275 for a first target. 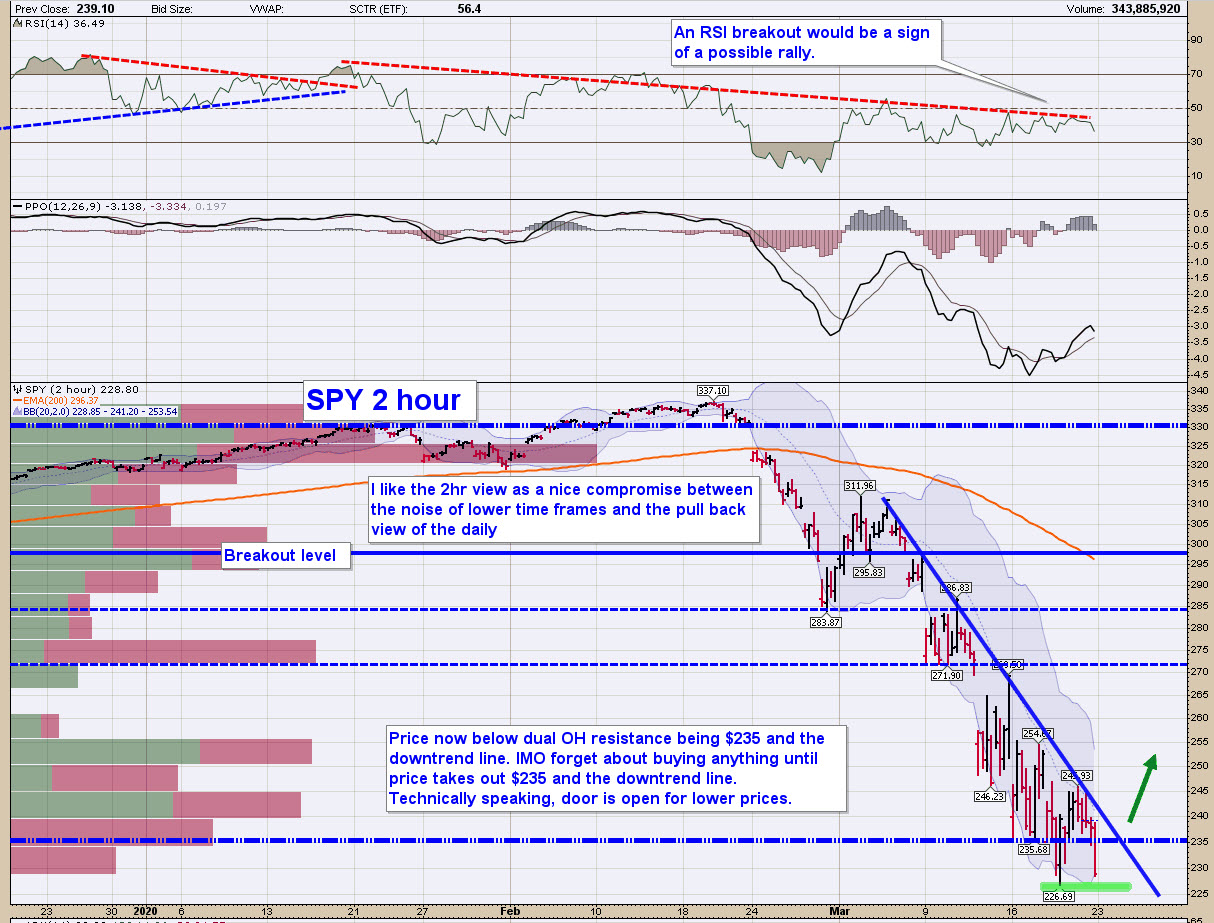 The Q’s are outperforming as evidenced by the fact that price is $35 higher than the Dec 2018 low of $142. You can look at that as the glass is half full as the leaders continue to lead or half empty that the generals have to come down to have the chance at a meaningful short term low. A break of $170 will be a clue that price is heading lower. 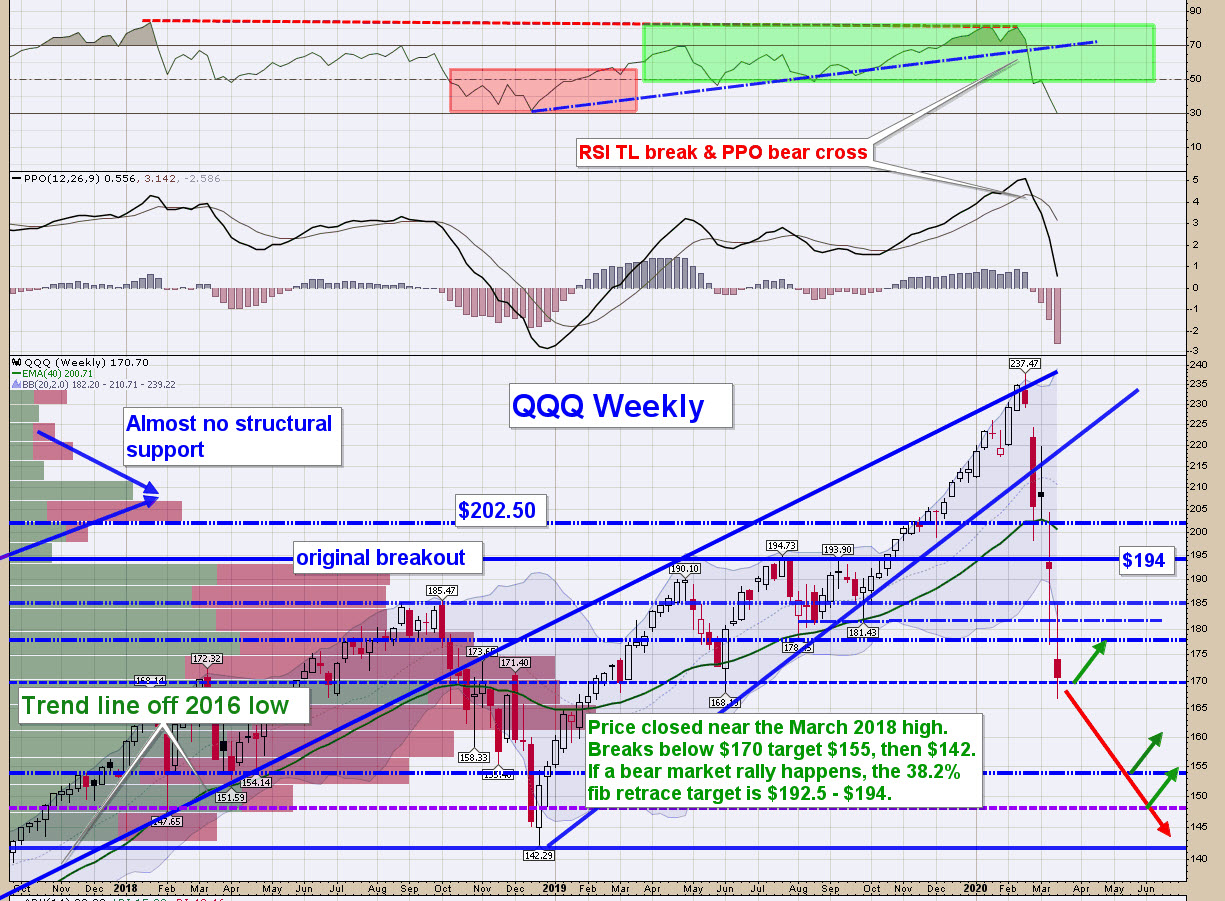 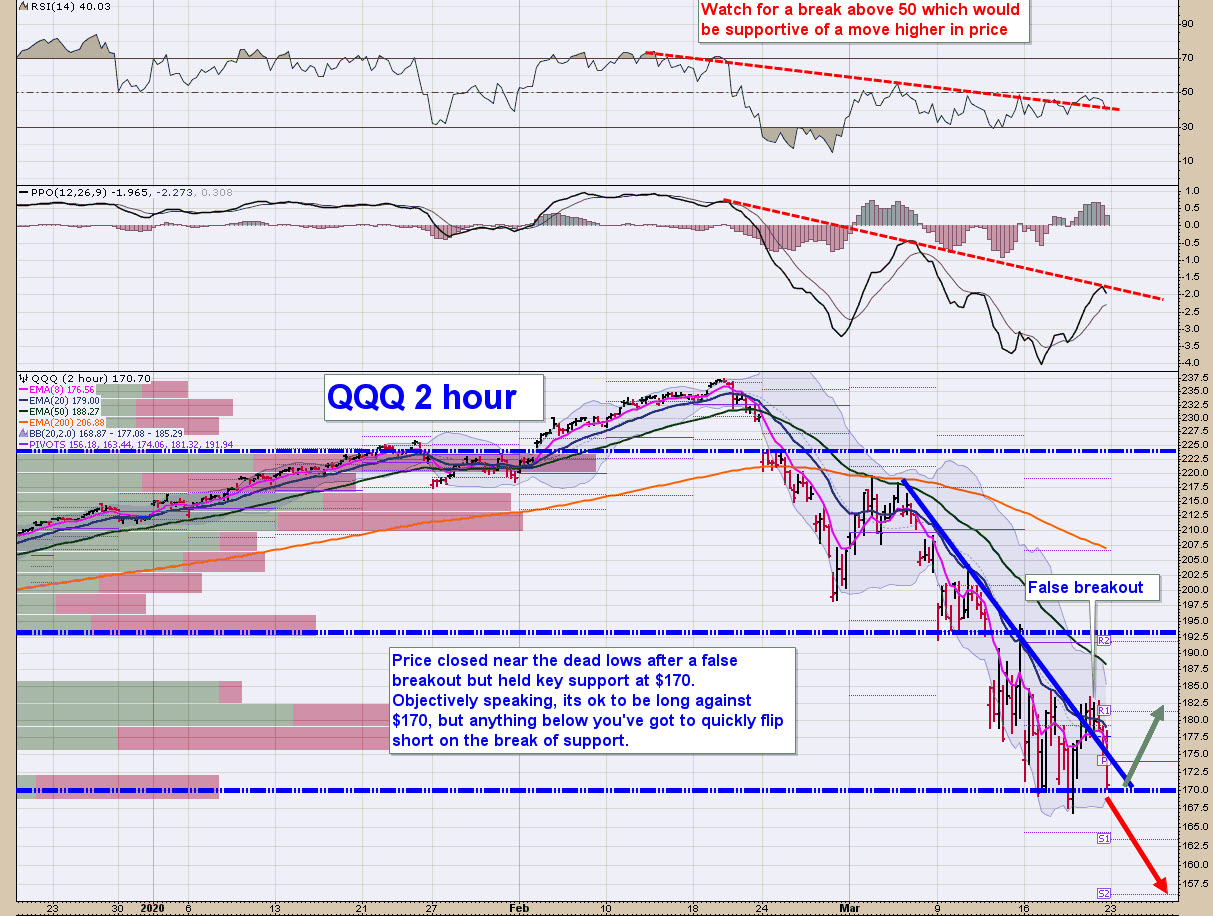 Leading to the downside and almost finding T2 down near $90. If a bear market rally brought price to $125 I’d be loading the bazooka for a big short w/ a tight stop above. 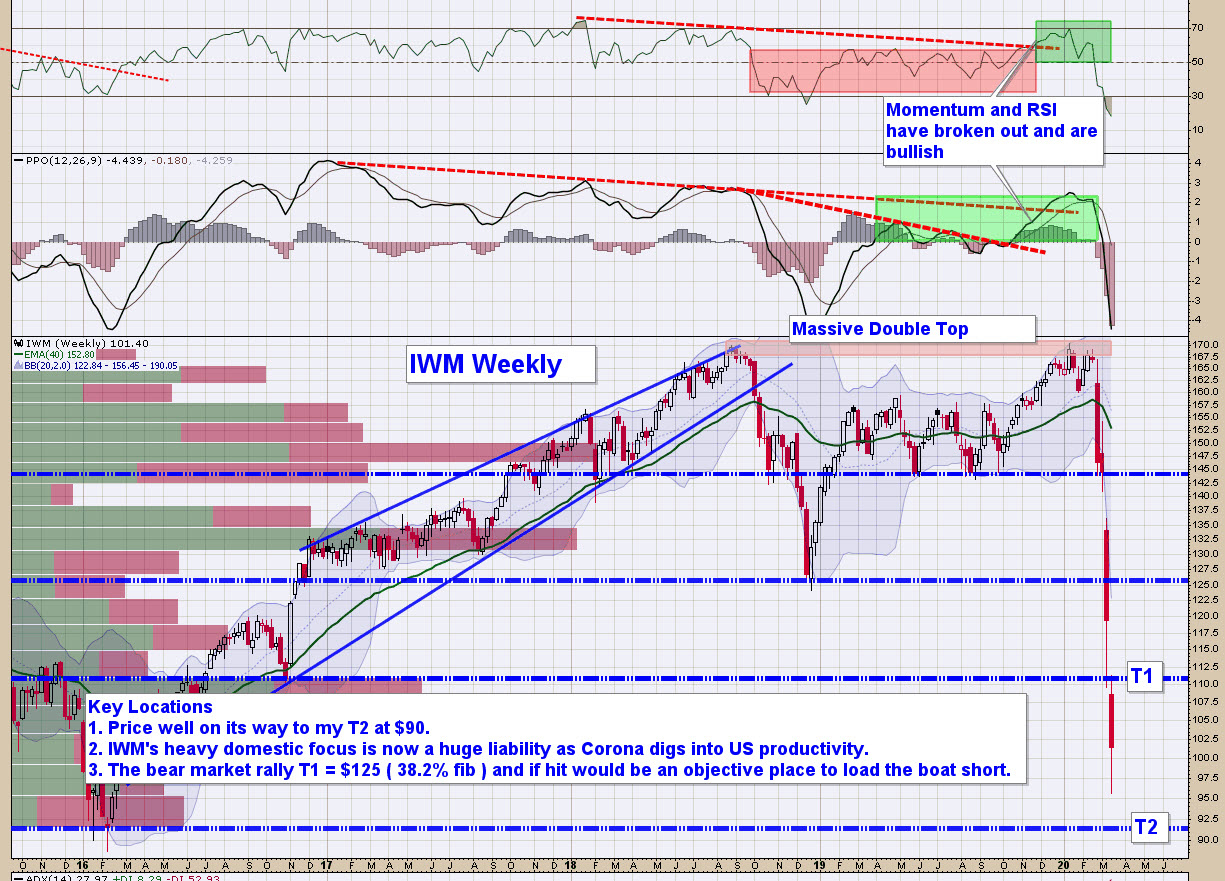 Active traders can use $102 as a tactical short term bull / bear toggle. 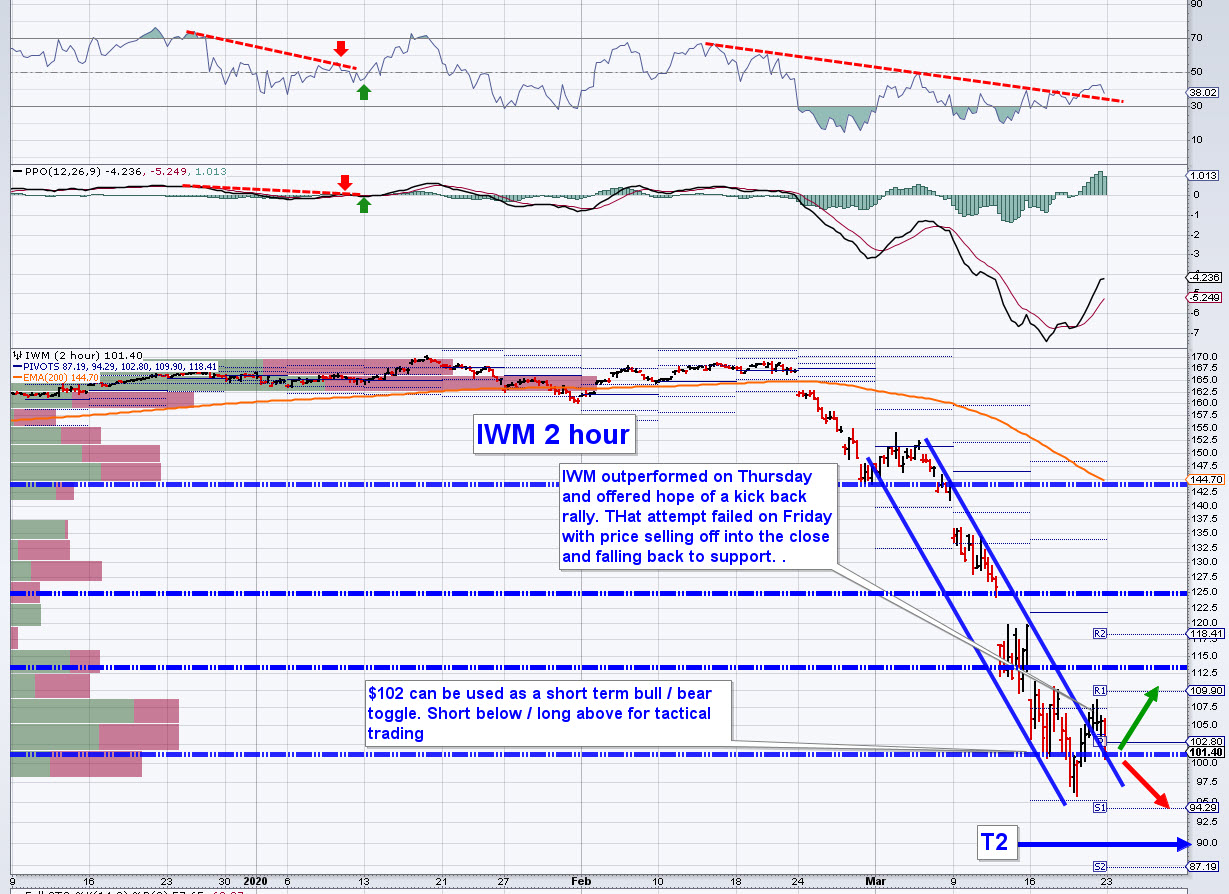 Not much has changed for me. I am still of the opinion that we have not seen the worst of the Corona fall out both in the real economy and in markets.  That said, I will be most pleased to take advantage of being long for a “rip your face off rally” then re-deploying shorts.  Or a break of last week’s lows to carefully open tactical shorts. I am placing max effort to keeping an open mind to all potential outcomes. I think the moment you are telling yourself we can’t go 15% higher or 15% lower next week, or even tomorrow you’re dead.

If you’ve been following me for a while, you’ll know I’ve been saying cash is king for a while.  Given we are still in the sell everything mode; others think so too. These are treacherous markets to trade. At the top of my mind is the question “What is the mistake you can least afford to make?   For me  it’s being close to all in long or short and being wrong. So I am not going to permit myself anything close to that amount of exposure.  If I am right on my calls, I will do quite well. If I am wrong, it will sting but I will still be trading a year from now. As a trader, preserving trading capital is your number one obligation. If you have capital, you can trade; if you lose it you are out.