Focus on Spiritual growth to grow as a trader

In the mentorship groups I host, we have spent some time discussing the emerging thoughts that spirituality can have a positive impact on our trading. The reason being that the teachings of the great spiritual traditions that have lasted thousands of years are in complete alignment with good trading. Although I doubt the Dalai Lama was talking to traders when he sent out the tweet, negative emotions can and do have a negative effect on our trading. Emotions of pride, anger, jealousy and arrogance have led to the downfall of many aspiring traders. As we have discussed a thousand times, if you want to improve as a trader, stop the endless search for another system to follow or some other silver bullet. They won’t help you. Work on yourself to understand, then control the negative emotions that undercut your performance on a daily basis.  Getting in touch with your spirituality is a great place to start. 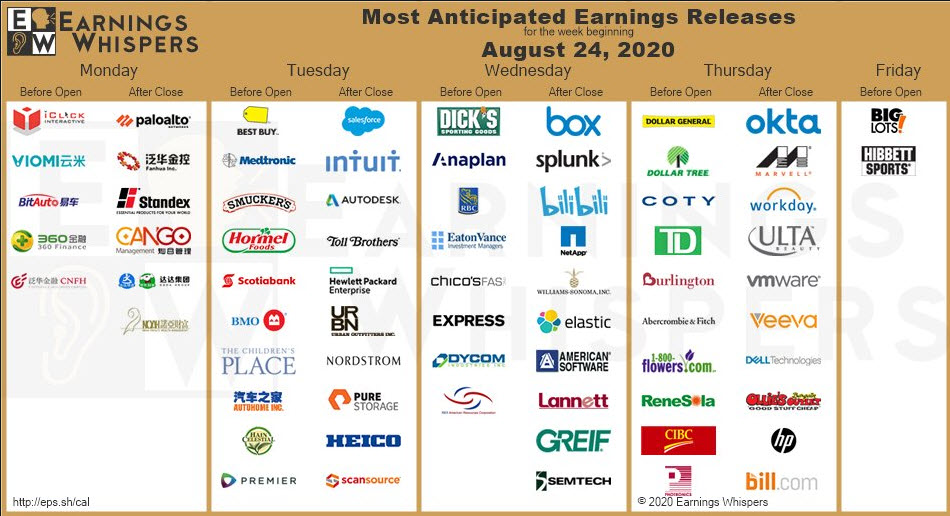 What to watch for Next Week.

Yellow Flags all over the place 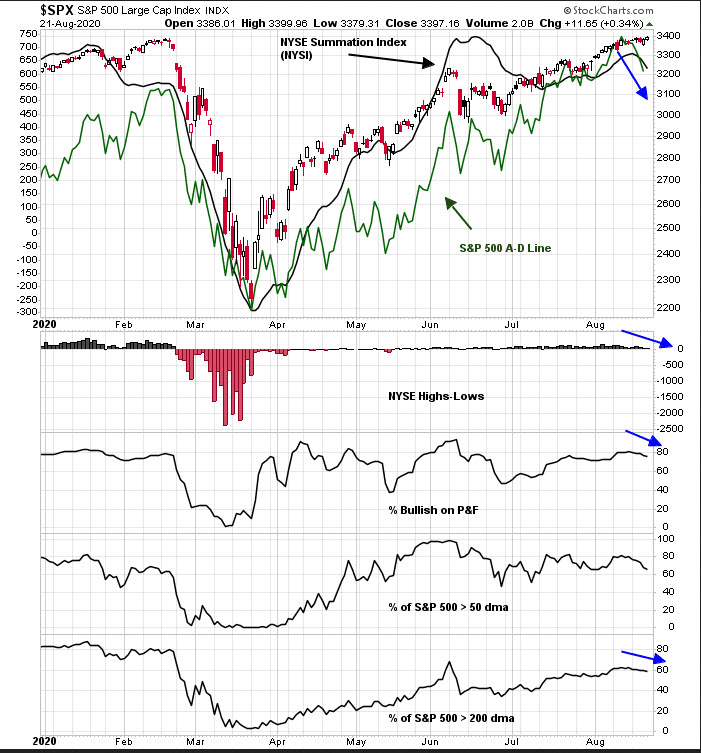 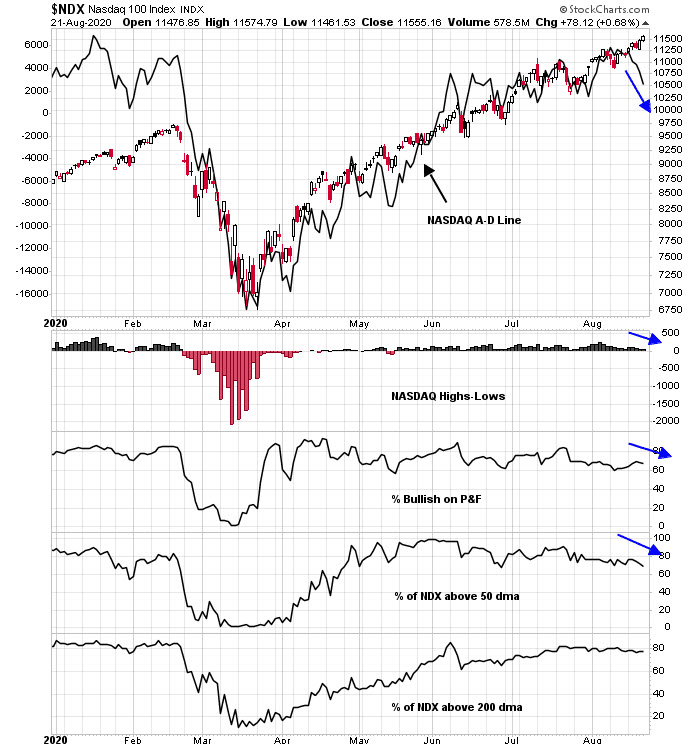 Pronounced bearish divergence in the Value line Geometric index. Not even close to the February highs. 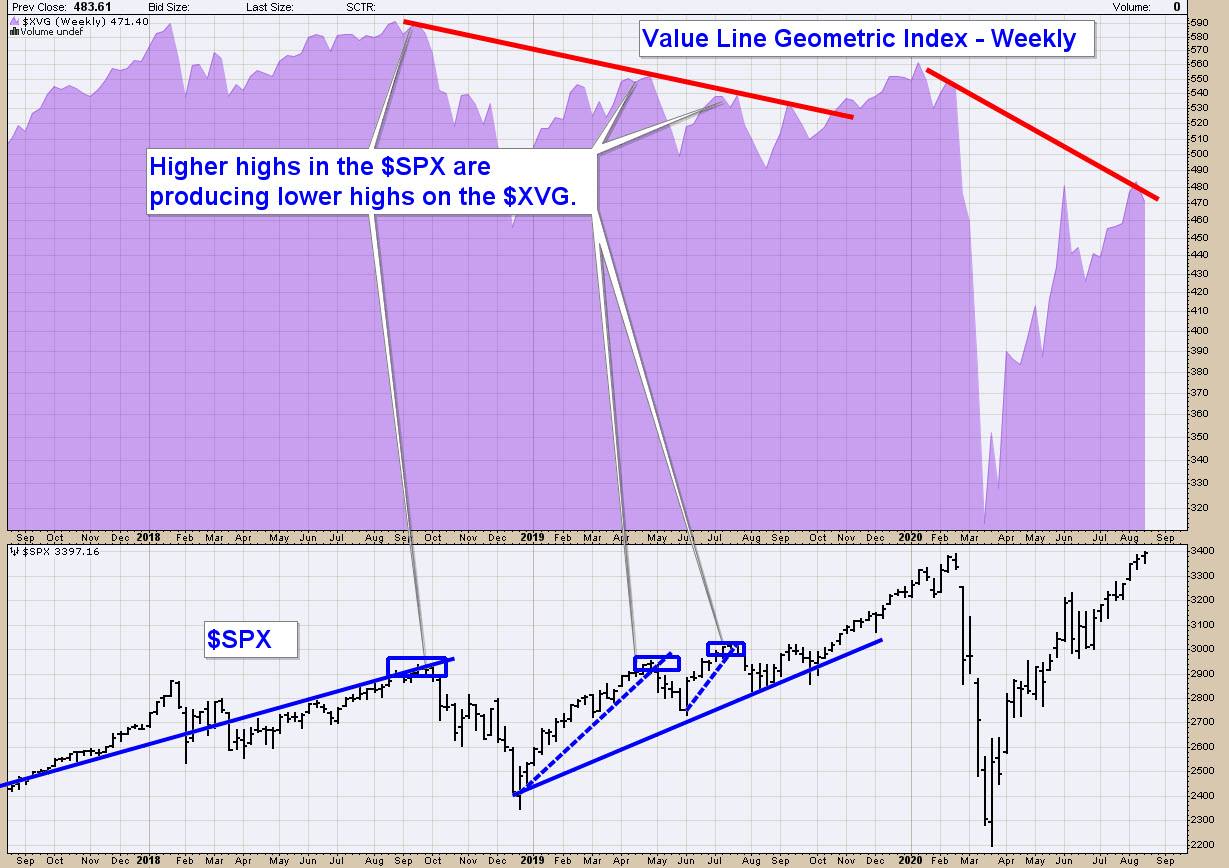 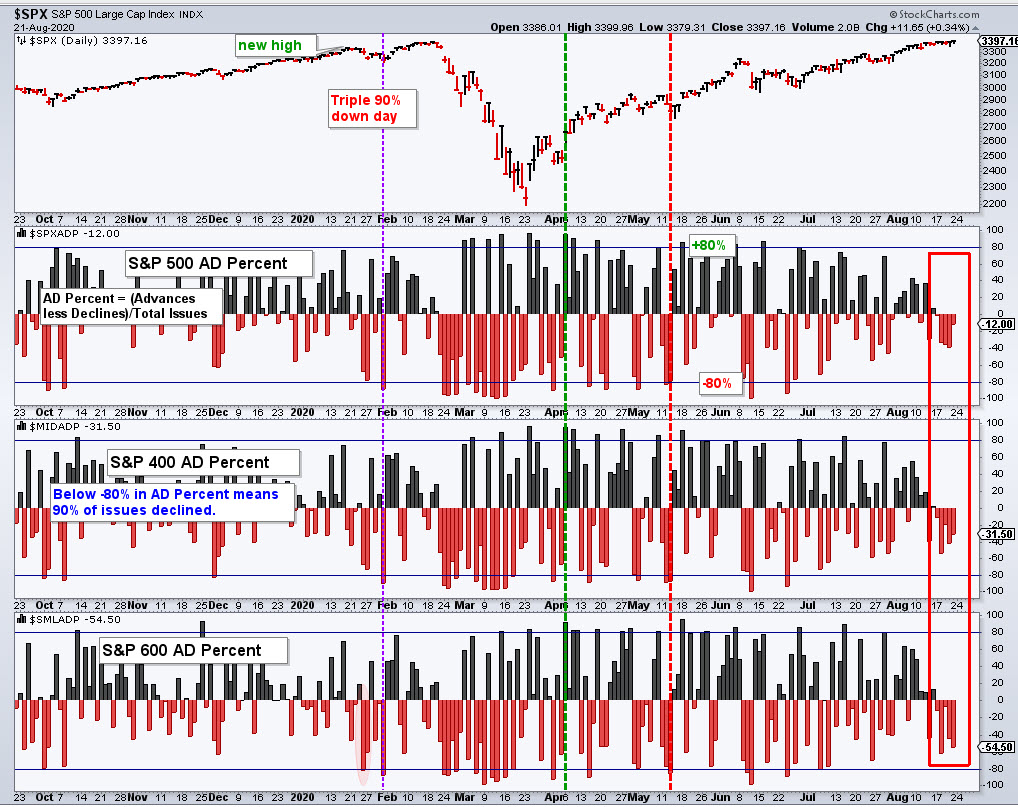 The Bears have left the Building

With the lowest short interest in 15 years ( contrarian bearish )  there would be little support from bears covering on a rug pull because there are no bears.  Also, coming out of OPEX is a time where market inflection points often occur. 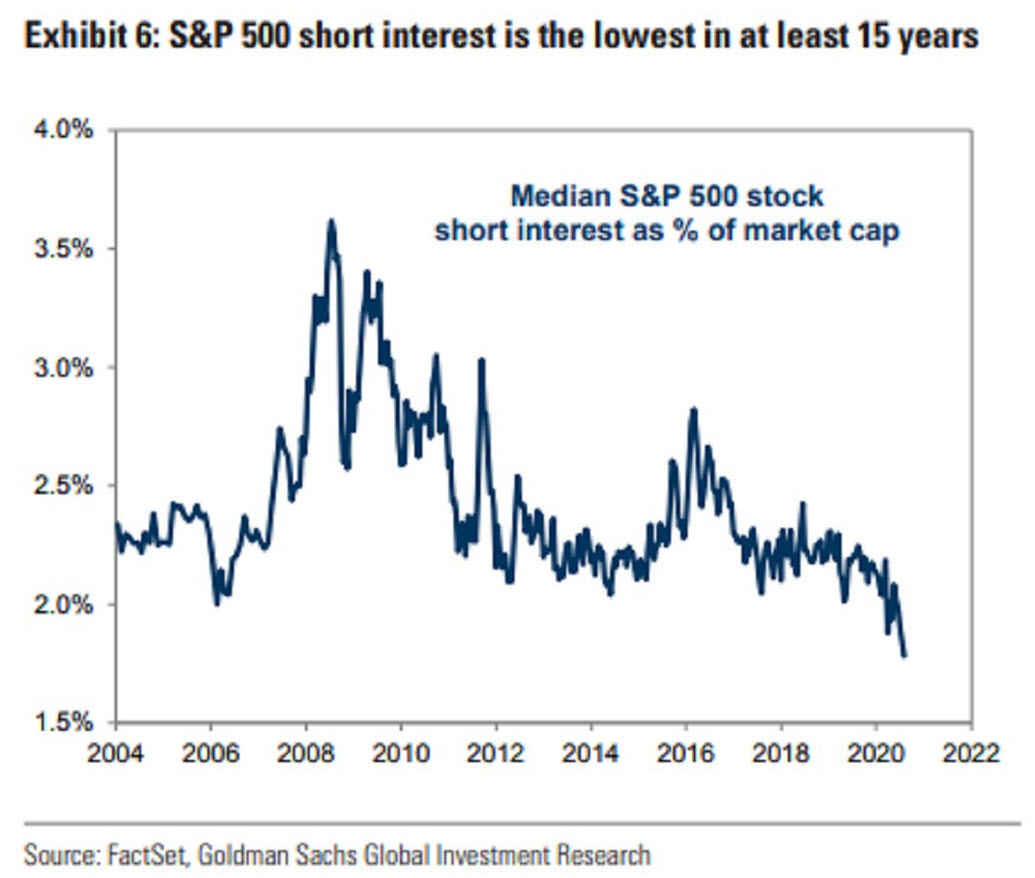 What can Relative Performance tell us?

Although the ratio is at resistance, the trend is still up. That is bullish equities.

Again, by this metric, risk on.

The trend is up; Risk on.  Keep in mind, with AMZN at around 24% of the weighting in XLY, the chart is heavily skewed to how AMZN performs

A crack in the armor, The trend break marks a move to quality over high beta.

The ratio is coming down and needs to hold its 200ema to keep the trend in tact. If the ratio breaks below the 200ema in gold, then we could say there is a move afoot to rotate into low vol names.

Dramatic out-performance  by QQQ over SPY tells you to stay long QQQ.

Semi’s are a cyclical sector that is often viewed as a canary in the coal mine for risk on / risk off. Here the ratio is in a well defined uptrend and thus risk on. A break of trend would change the picture.

Despite a few weeks here or there where value had a resurgence, those episodes have been faded. Now, growth is actually breaking out. Until this ratio rolls over and breaks the primary trend line, I think value spurts are head fakes.

A great trend line to follow. Even if you don’t trade volatility, you should watch it. A break out above 25 could pop this and give it running room. A move above 27.50 you’d definitely be feeling and seeing it in an equity pull back. Set an alarm at 25 and sit taller in your chair if / when it triggers. You can see in the history of the chart, break outs above well defined down trends have resulted in significant vol spikes.

Yellow flags dominate. Breadth stinks as leadership has narrowed to the FAAMG and other high growth names. Other risk- on ratios are hanging in there.  Bulls should be concerned with bearish sentiment at 15 year lows, but until price breaks trend and the other risk on ratios roll over there is not a reason to sell. When / if you see semi’s break down and trend breaks on the risk -on ratios that would be a time when we could objectively say the tide is changing. Watch the $VIX. Alarm $25.

Key off $61 as your pivot point. Above ok for Bulls, below not so much. 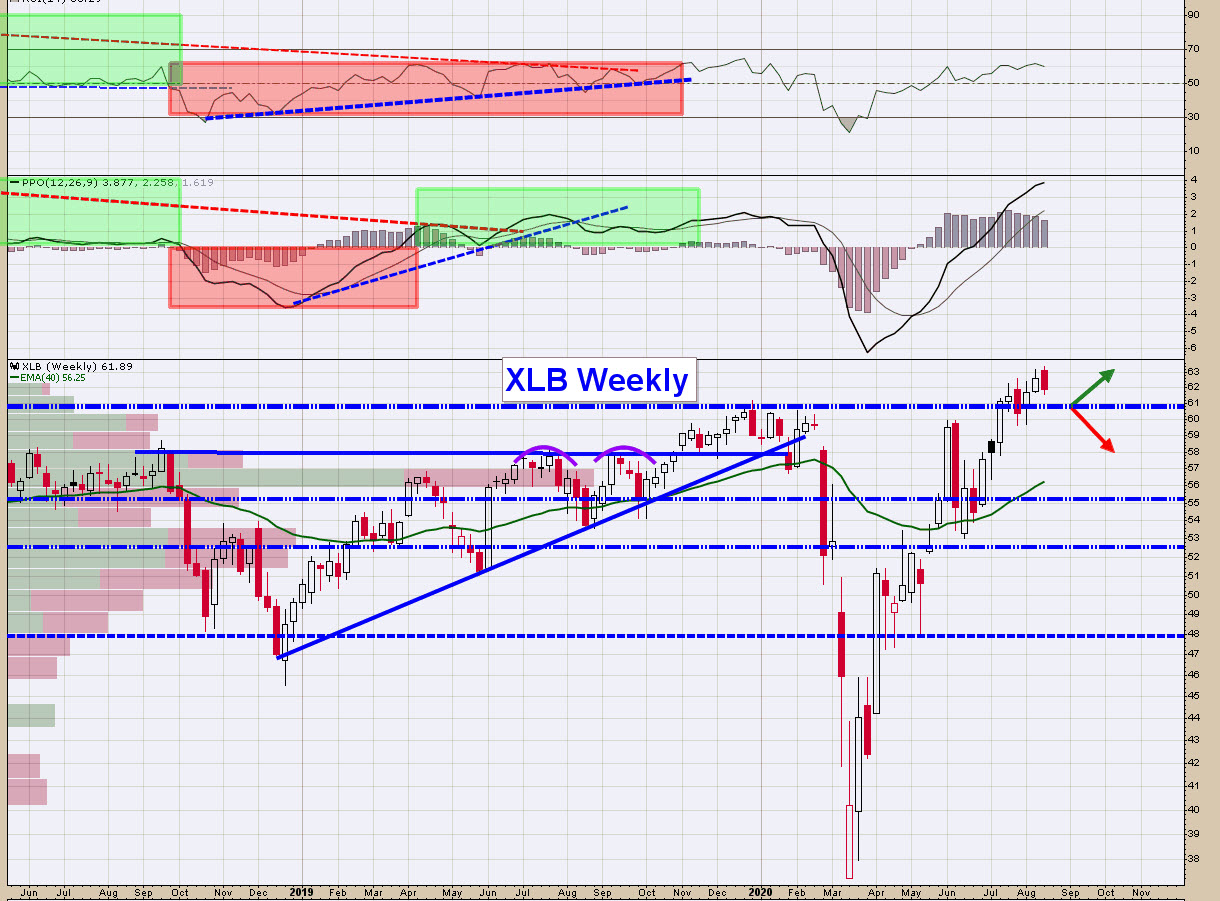 At 44% of this index, as long as GOOGL and FB perform, XLC will continue to perform. THat said, that trend line is extremely steep. Any break would likely result in a pull back to $57. Bulls can stay long against the trend line, but on a break below, be careful. 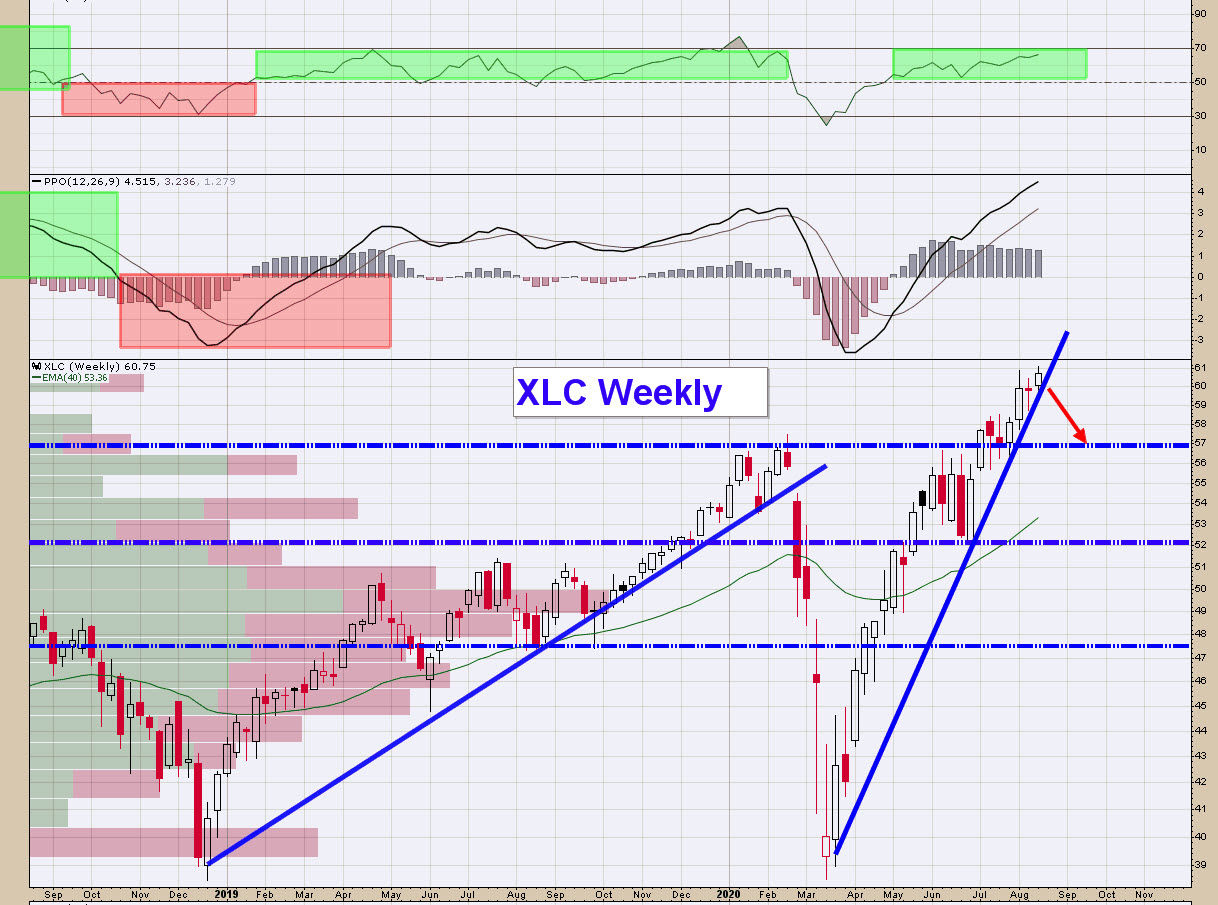 Simply put, a horrid chart. A break below $35 would open the door to March lows. You’d have to respect a break out above trend, but I don’t see that coming. The 40 week ema has contained the rallies for the better part of 2 years. 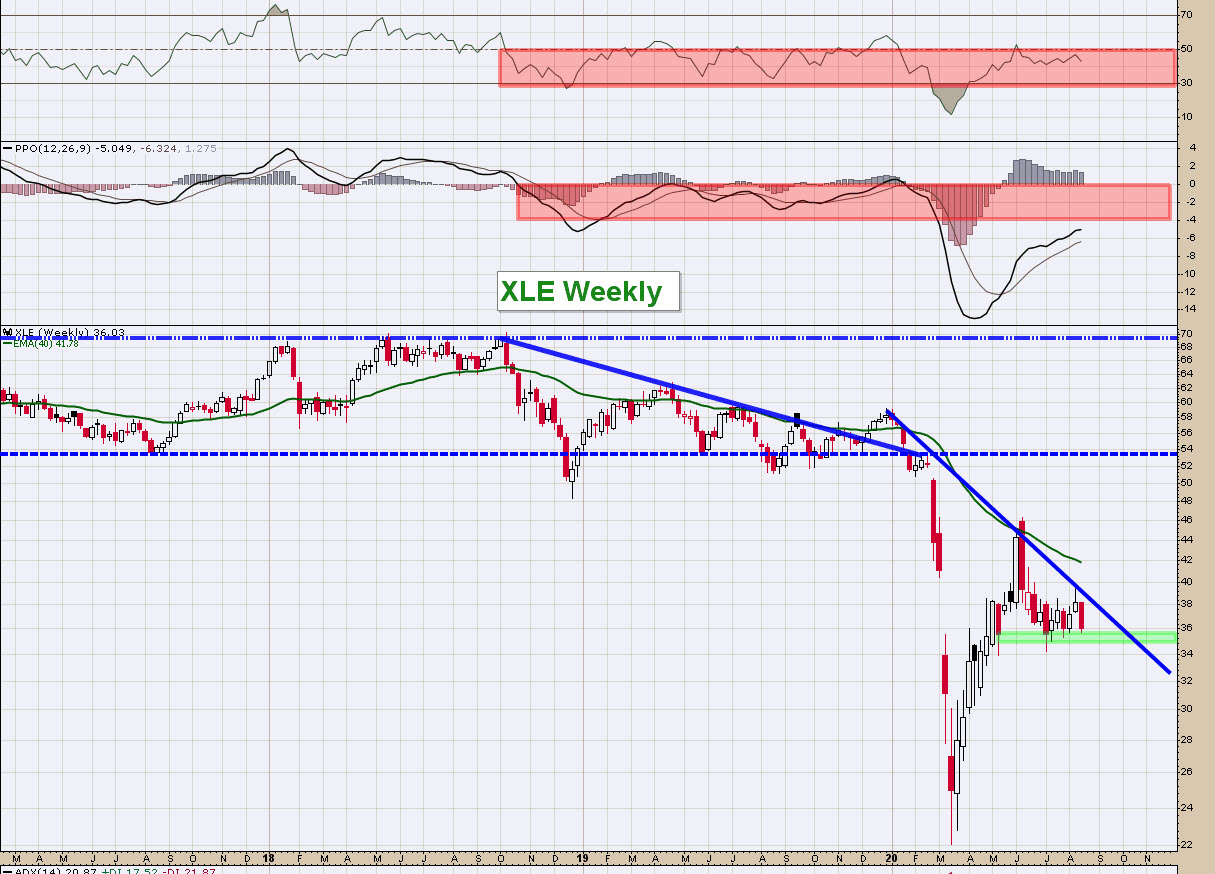 Financials have been a very poor performer for years, not just since from March. The RSI and PPO remain in their bearish regimes. Although you’d have to respect a bbreakout above the symmetric triangle, I would not be a buyer. A break below the triangle would favor a move back down to the $22 level. About a 10% drop.  Just not buying the long financial trade. 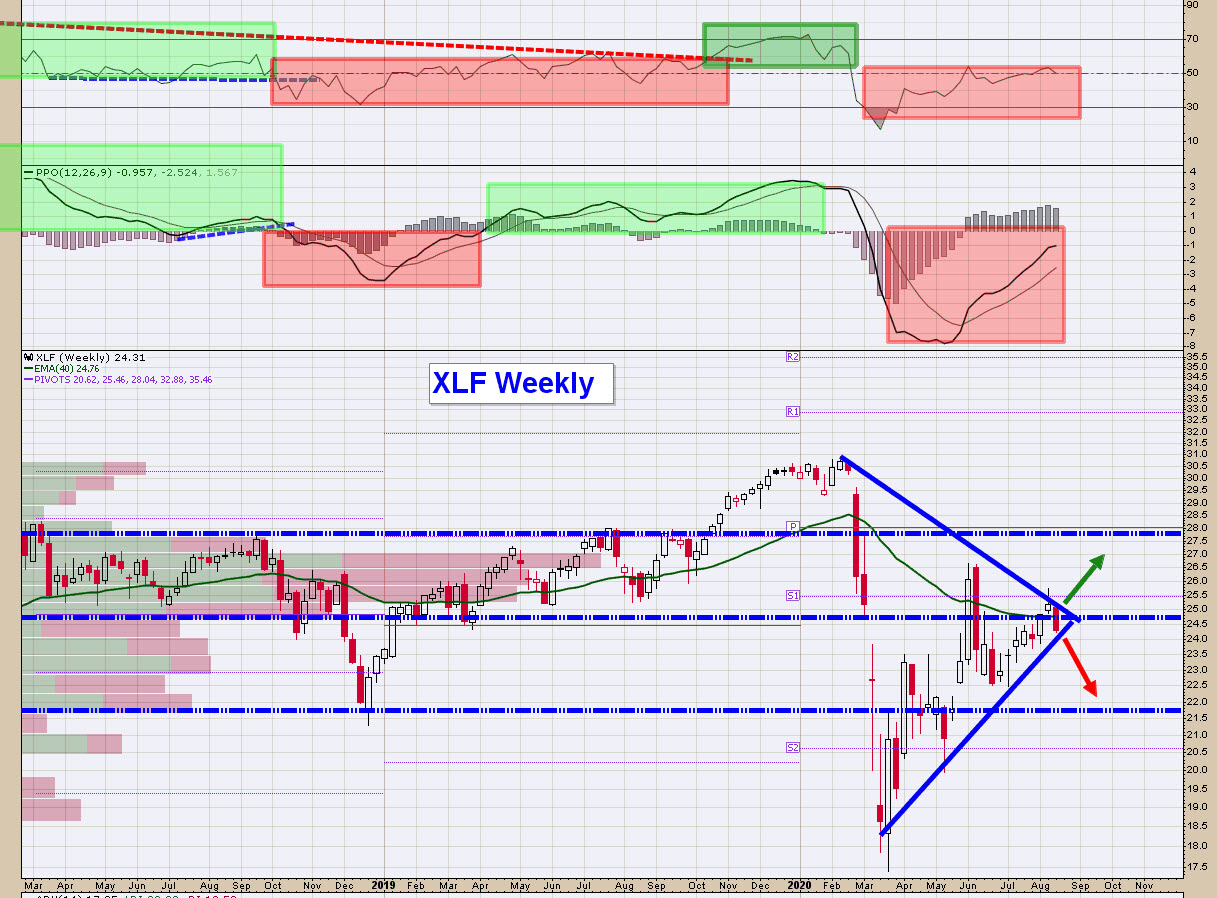 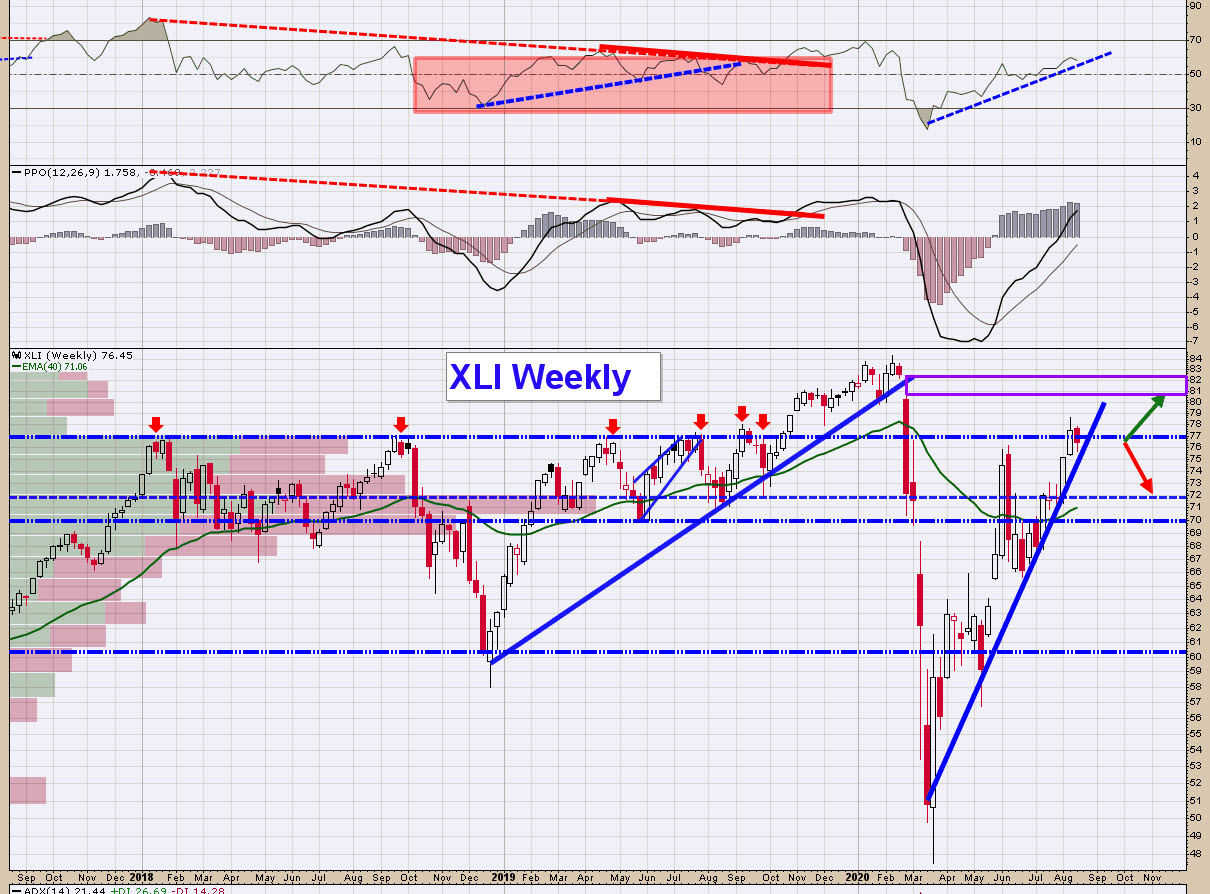 A clear market leader with price working its way into a rising wedge. Key off the uptrend line. Breaks back below $112 would be a warning shot. Not a ton of technical support until a back test of the breakout around $102. 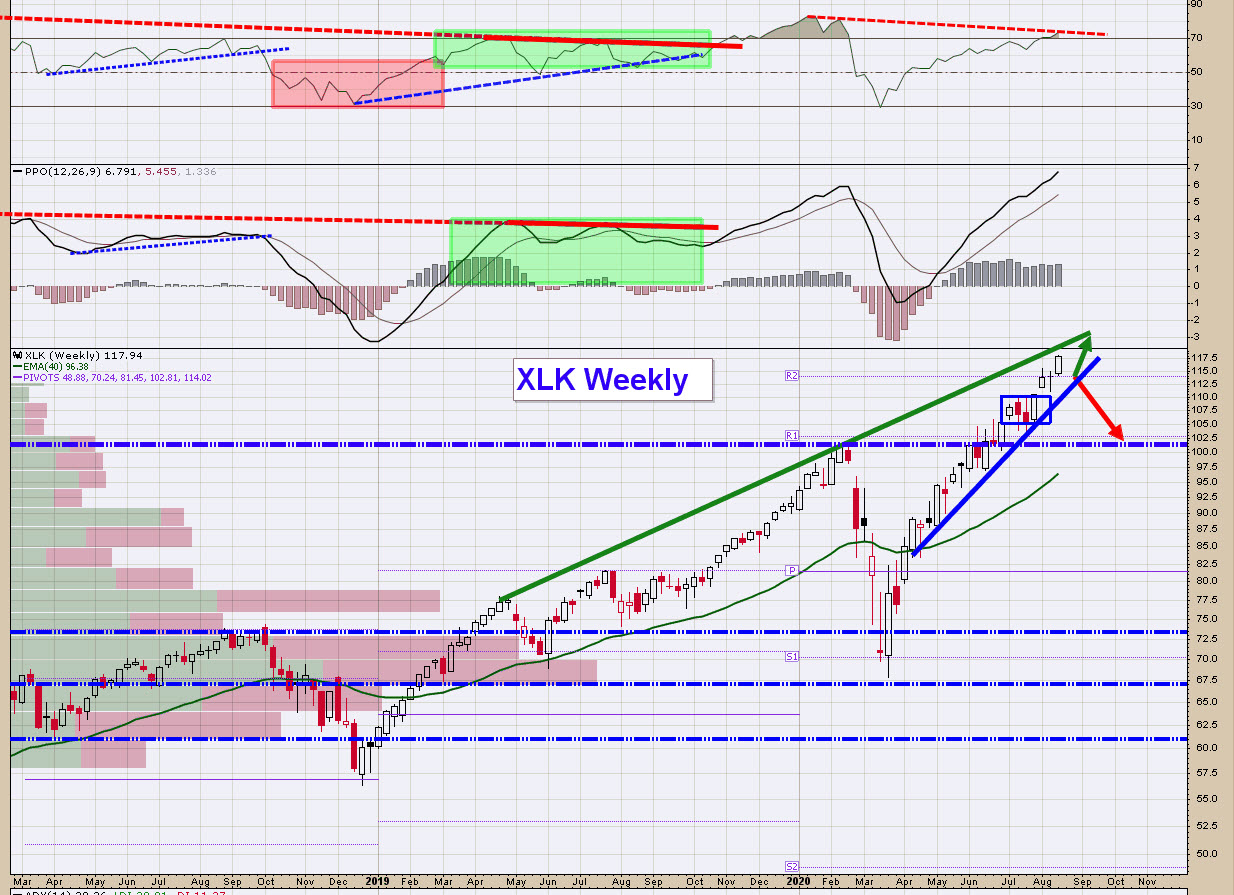 Price inching above $64 and the prior high, but the break out is anything but impulsive. Bulls ok above $64 but a dip back below $64 would offer an objective short with a stop just above. 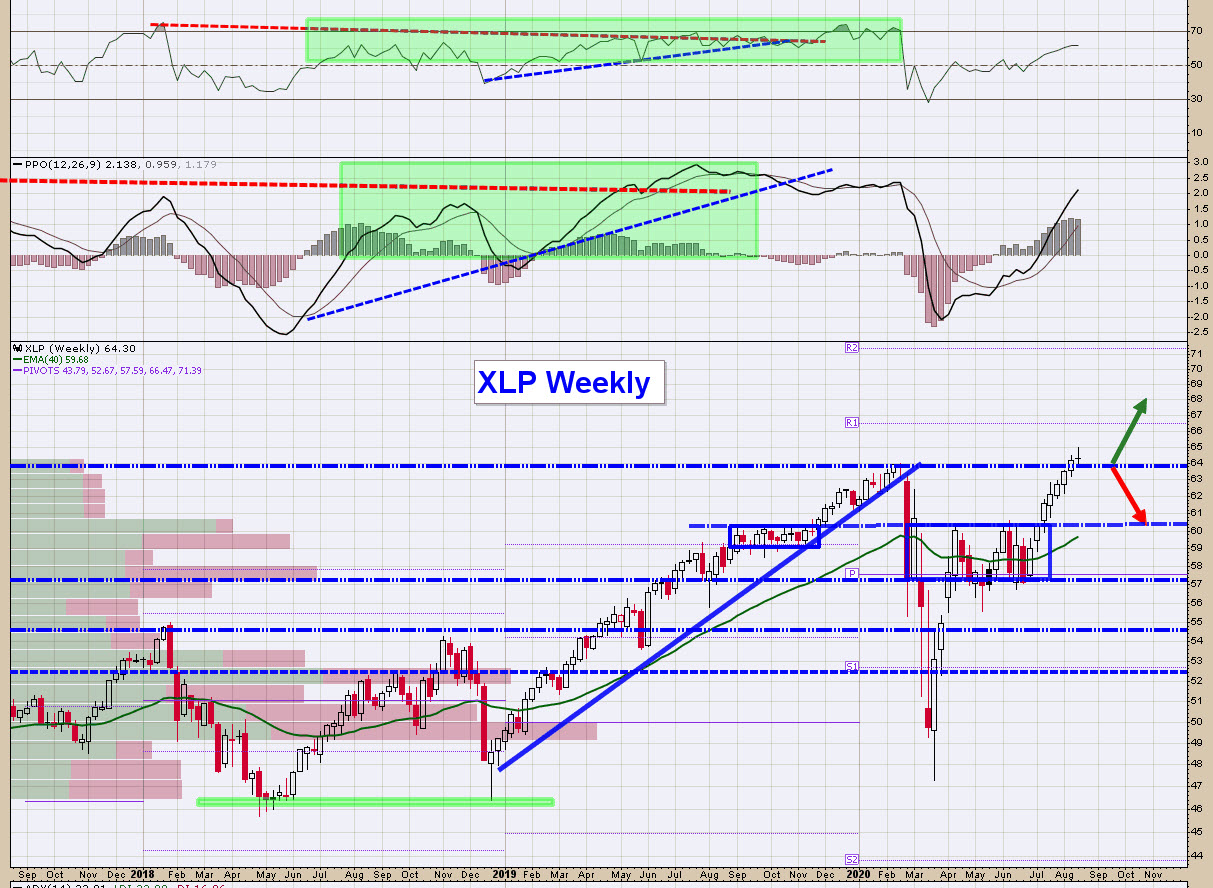 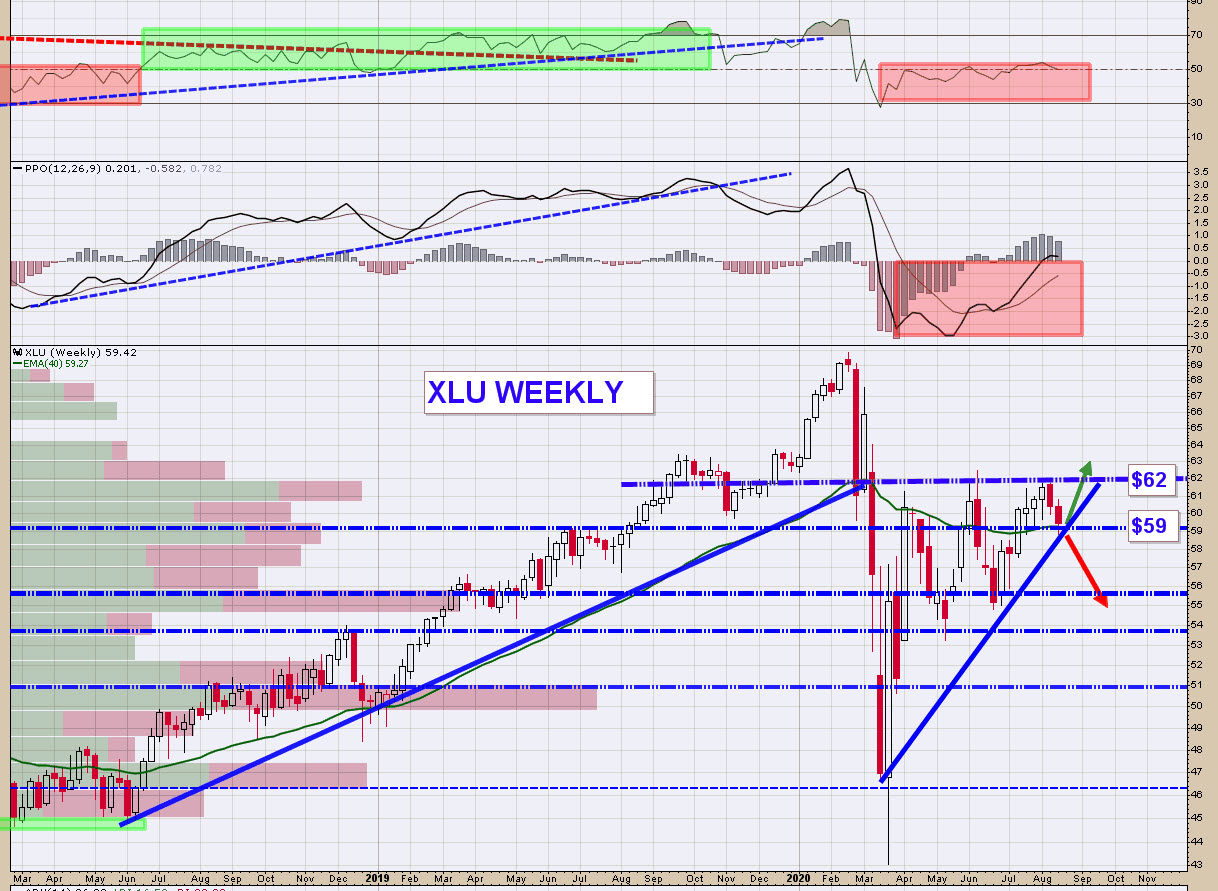 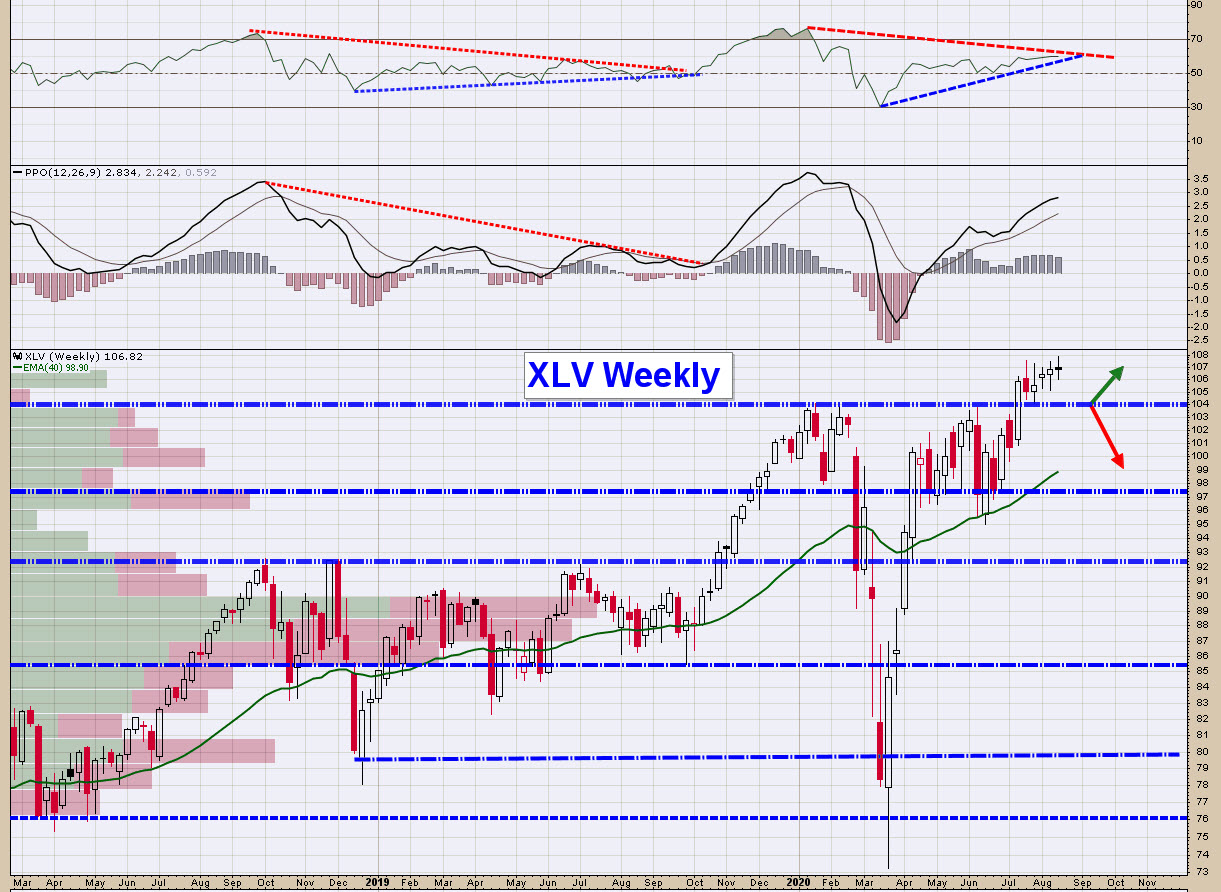 All about Amazon. 25% of index; Watch for a break and weekly closes below the steep ascending trend line. Really no structural support until $132.50 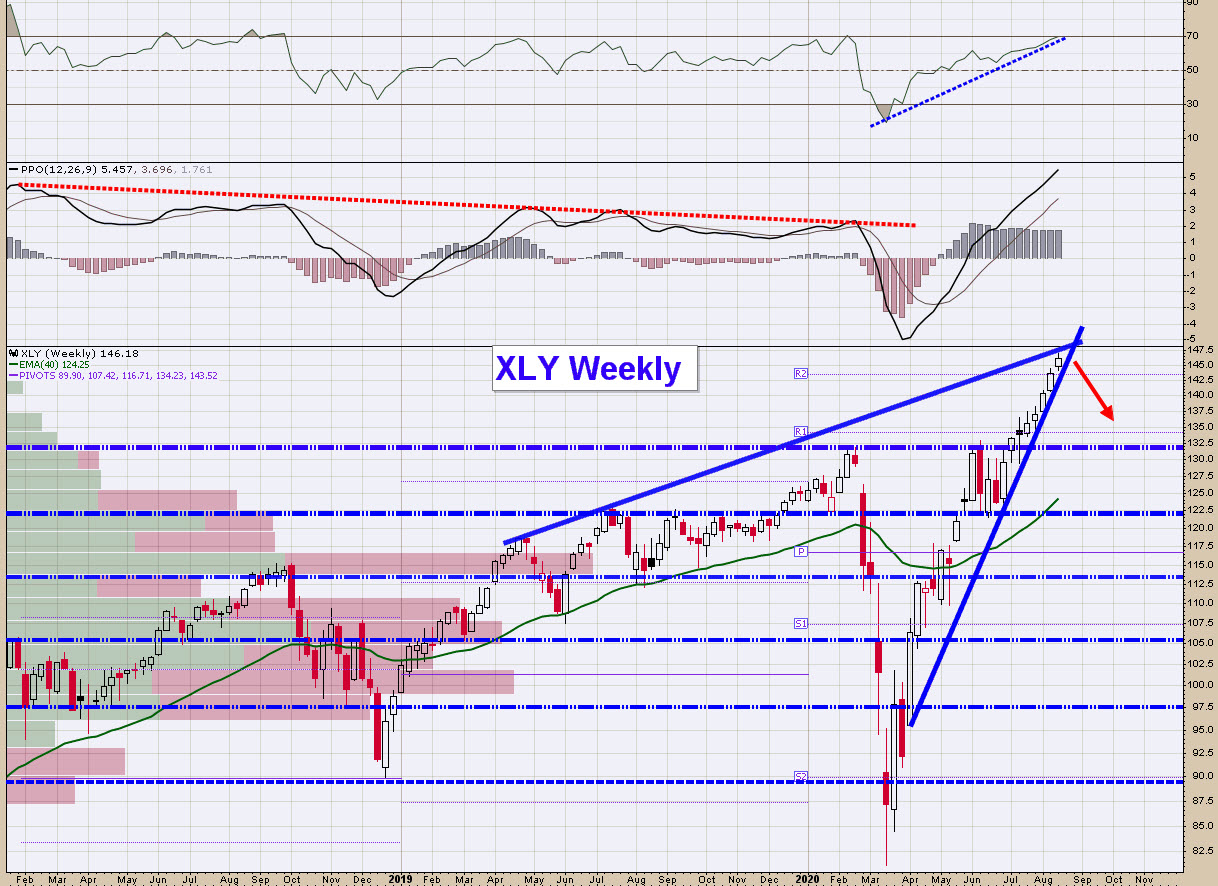 Showing signs of weakness here at the top. Breaks back below $335 and moves down to $327 would be red flags. Bearish divergences are ever present. 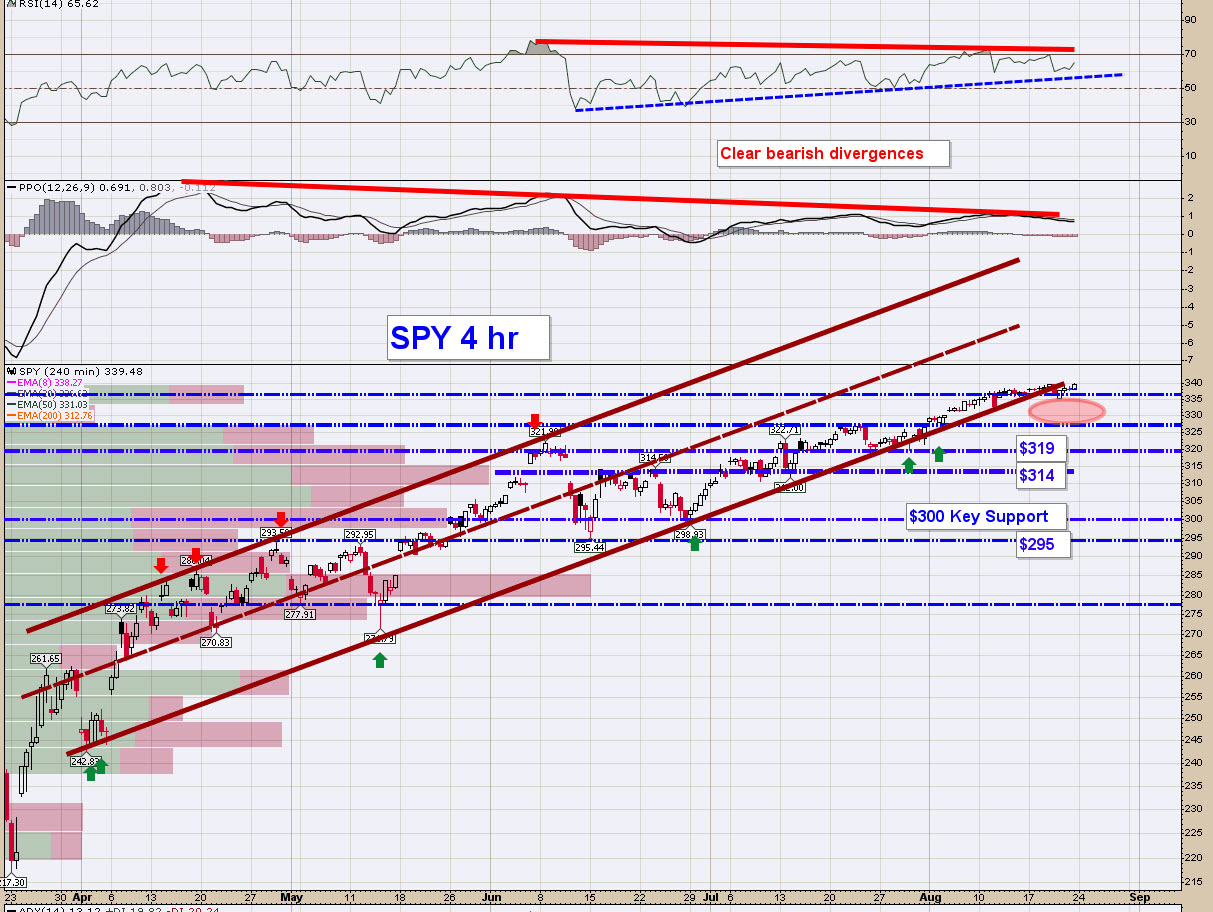 Price well within a nice uptrend. If price breaks above the mid point of the channel, price could run to $300. Gotta stay long within the channel and while you do, watch FAAMG like a hawk. 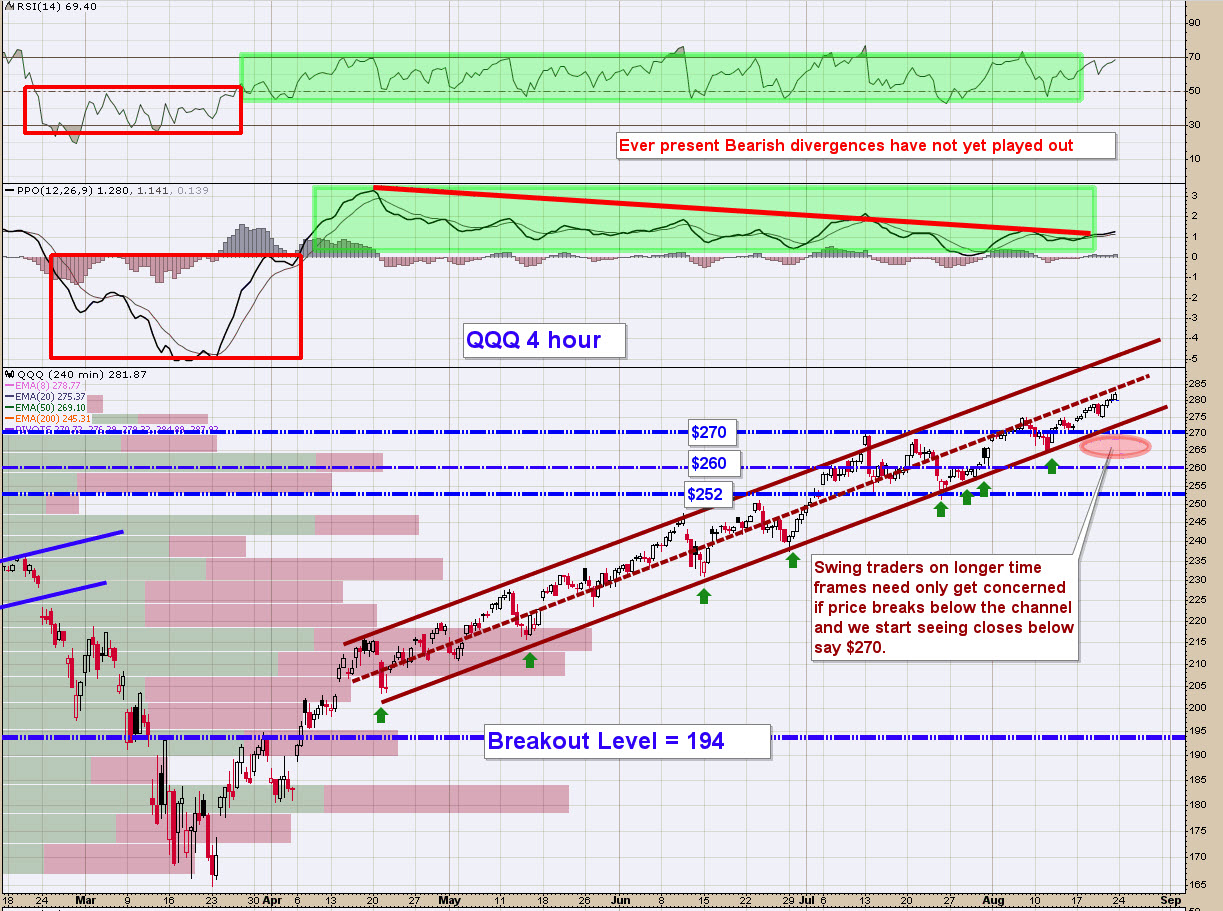 Hard to see, but IWM on the verge of a breakdown. If price slips much below $155, the target would be $150 and the trend would be broken. Confirmation would come with RSI moving lower below 50 and PPO breaking below 0

Registration is simple and FREE   Visit our homepage   HERE