The Weekend Profit Navigator takes a look at the big picture and provides the stock market analysis for the week. Key levels and trading locations are provided, along with trading plans and timely commentary to keep you on the right side of the trade

Trader’s Couch –    Take your positions, then shut the F up

2015 – 2018 was a nightmare for Bill Ackman’s Pershing Square.  High profile fails in Valeant and Herbalife helped his firm to loses billions in capital plus billions in redemptions as investors fled in droves. So from that perspective, being up 58% in 2019 has been a godsend giving the firm new life.  Was it dumb luck that his new trades performed well this year or did something else change?   Ackman’s down period was highlighted by very public pronouncements about his positions, regular appearances on financial media, and lots of scraps with detractors  including Carl Icahn.  What changed in 2019 is that Ackman went dark. Almost no media in 2019 and certainly no public bickering or bull / bear debates on his positions. I don’t think it’s a coincidence that his fortunes changed for the better after  he shut up. .

Market Wizard Jesse Livermore had a lot to say on the topic.  Here is a quote from Livermore.

“I didn’t have a following. ( within the brokerage houses ) I kept my business to myself. It was a one-man business, anyhow. It was my head, wasn’t it? Prices either were going the way I doped them out, without any help from friends or partners, or they were going the other way, and nobody could stop them out of kindness to me. I couldn’t see where I needed to tell my business to anybody else. I’ve got friends, of course, but my business has always been the same—a one-man affair. That is why I have always played a lone hand.”    You can find more HERE.

Be careful about making a big noise about your holdings. It invites debates which can suck you into a negative vortex that can plant seeds of doubt. Unless there is some big reason to let everyone know what you’re doing, be careful about it. What is the point? To be a big shot when the market proves you right?

I think Ackman learned a big lesson between 2015-2018. I’d be surprised if he reverts back to his old style, but we’ll have to wait and see. Learn from his experience.

The run up into earnings season is usually bullish both for specific stocks and the market in general.  Keep this in mind in January. 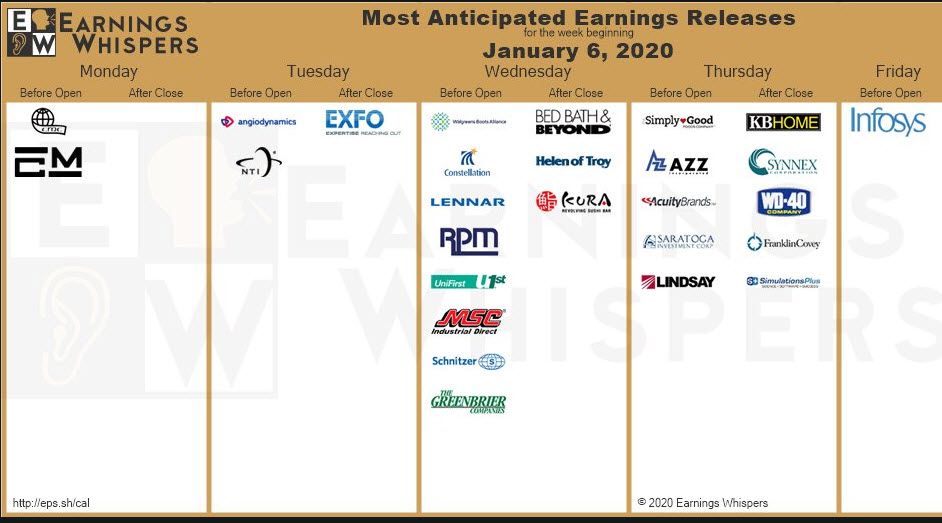 I’ve had several inquiries about a wide range of topics as the calendar turns and folks look ahead to the early part of the year. While I am not big on prognostications, ( I prefer simply trading price ) I will give it my best to take a swing at the main themes for the first part of the year. Here goes.

The market has become more about the FOMC and less about everything else.  The attempt to withdraw liquidity through QT in 2018 was a disaster and prompted a complete capitulation by the FED in early 2019. Now in early October the “not QE” program is again expanding the FED’s balance sheet substantially and market’s are loving it. So I think here is where we are at.

From a technician’s standpoint, there are at least a dozen reasons why we are “due for a pullback”.  There’s only one problem, price keeps rising.  Since price is the final arbiter, traders should maintain a bullish bias. 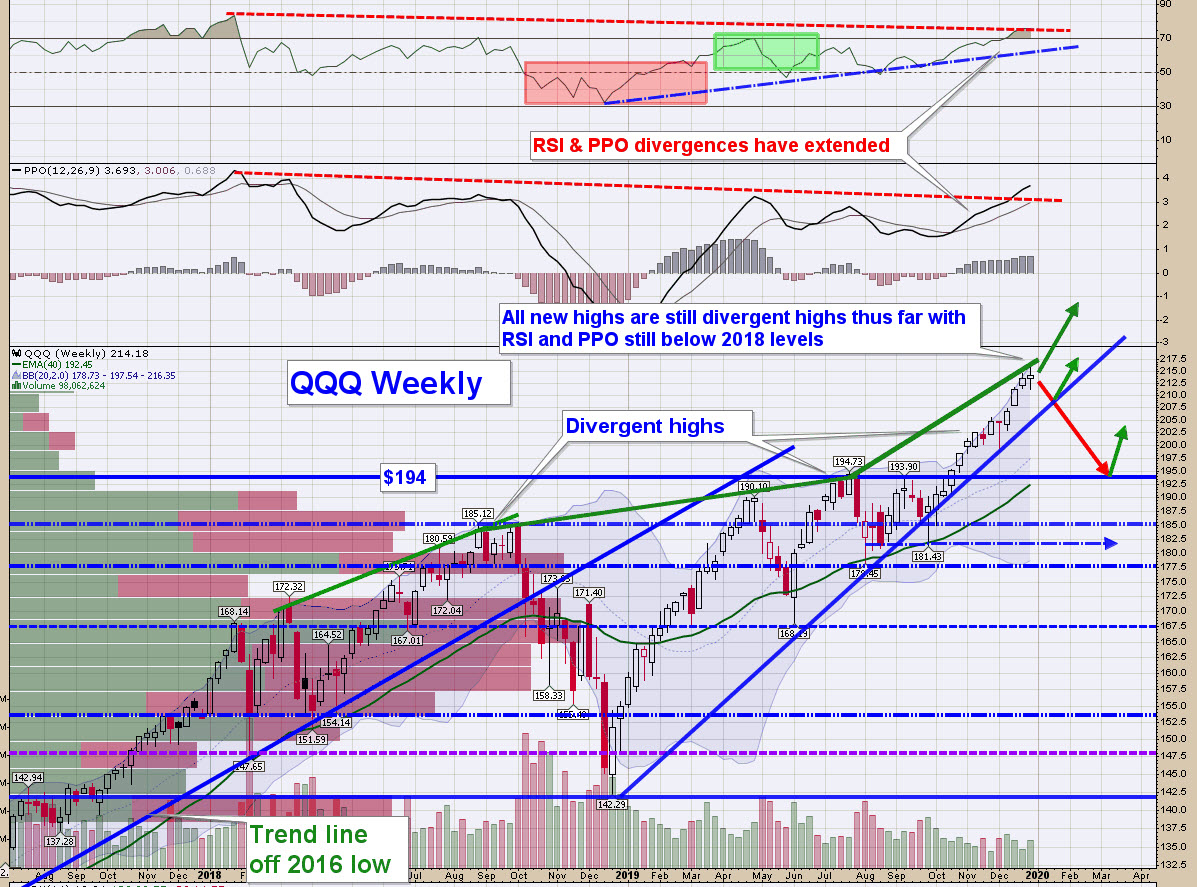 $IWM Weekly: Small caps have been lagging the large cap indexes. To my eye, weekly prices need to hold $164 or a back test of the breakout would be favored. Above $164 and price has a clear shot to test the prior highs. 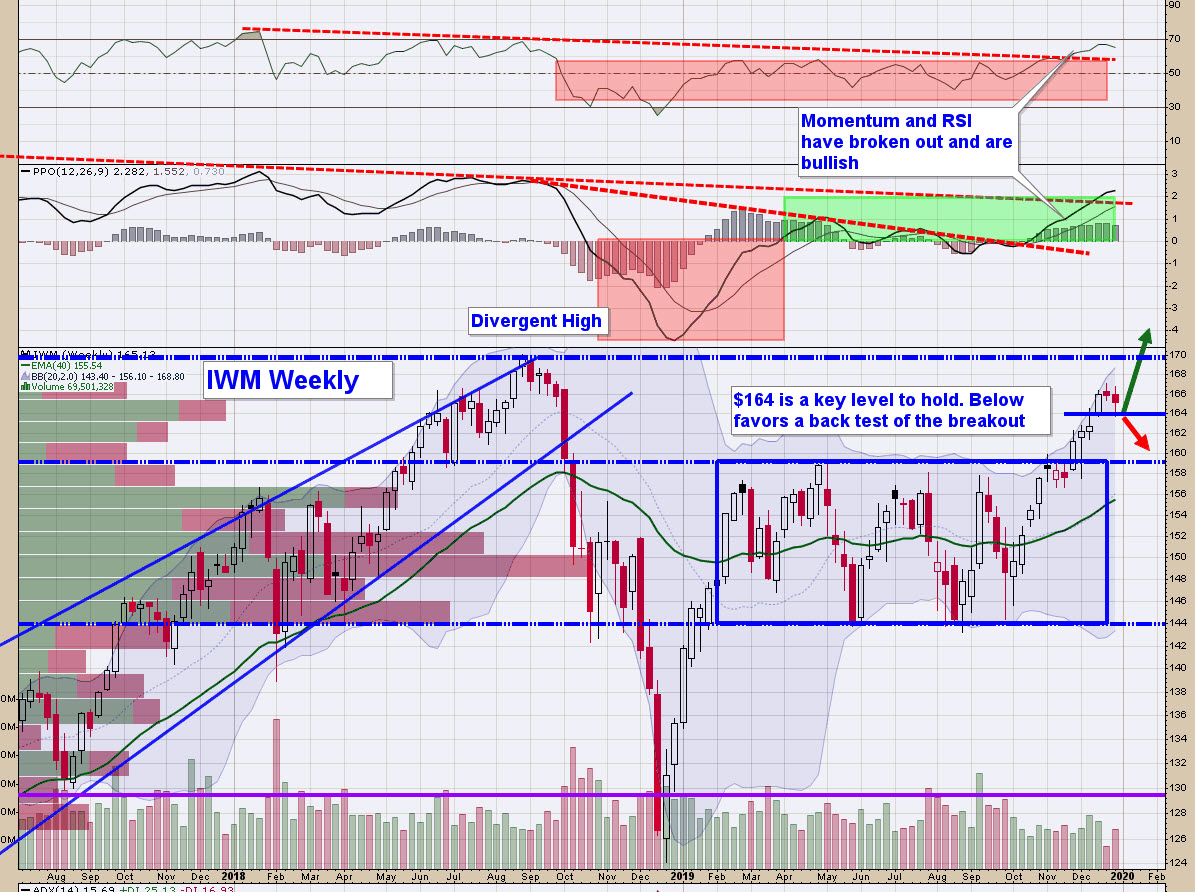 The world remains starved for yield. That fact isn’t going to change anytime soon. I believe what we will see is that when yields pop up between 1.95 – $2.10% on the 10 year, there will be a big time bid sitting there to drive it back down. There has been a ton of volatility injected into the bond market over the past 18months. I think it’s become much more of a trading vehicle than it has before.

Lots of folks calling for a falling dollar in 2020. I am not enough of an authority to even guess, but I do know this much; If you get the $USD move right, lots of stuff falls into place. I am watching it very closely.

$UUP Weekly  The first chart shows relationships that are important to the $USD strength / weakness. THe lower panels are set up so if they are rising they are supportive of dollar strength. Lower implies dollar weakness. Trend breaks lower would favor a weaker dollar.

The second chart is the $UUP Weekly. It is currently testing the 40 week ema in green.  A break below would be bearish and likely send the Dollar much lower.  Something to point out. Notice the sweeping moves in price over time. Once the Dollar changes trend it usually goes for a long while. Once you get in, you can sit in it for months.  So don’t think you missed anything meaningful on the first tick lower. 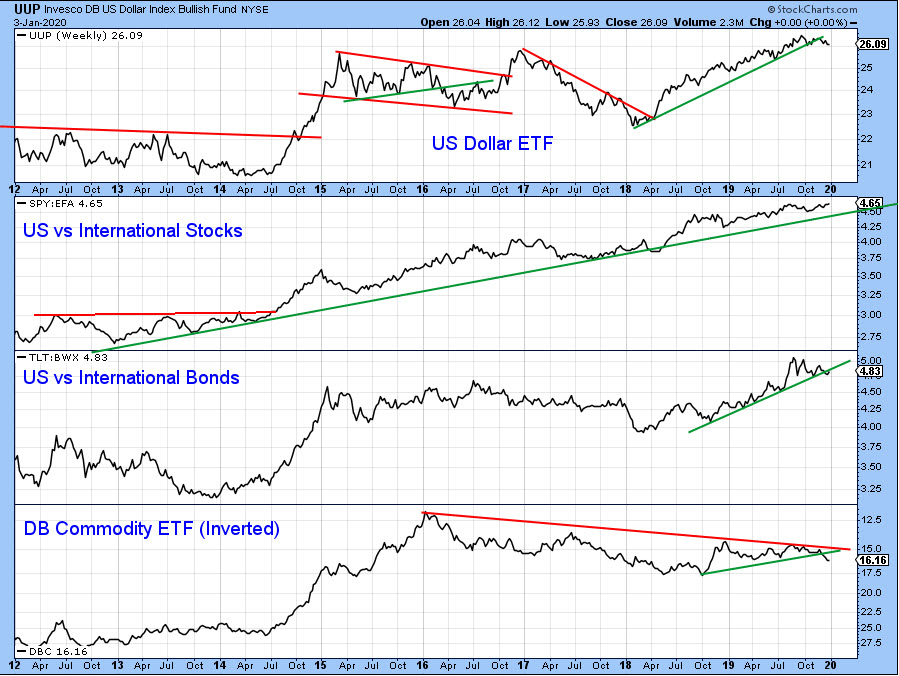 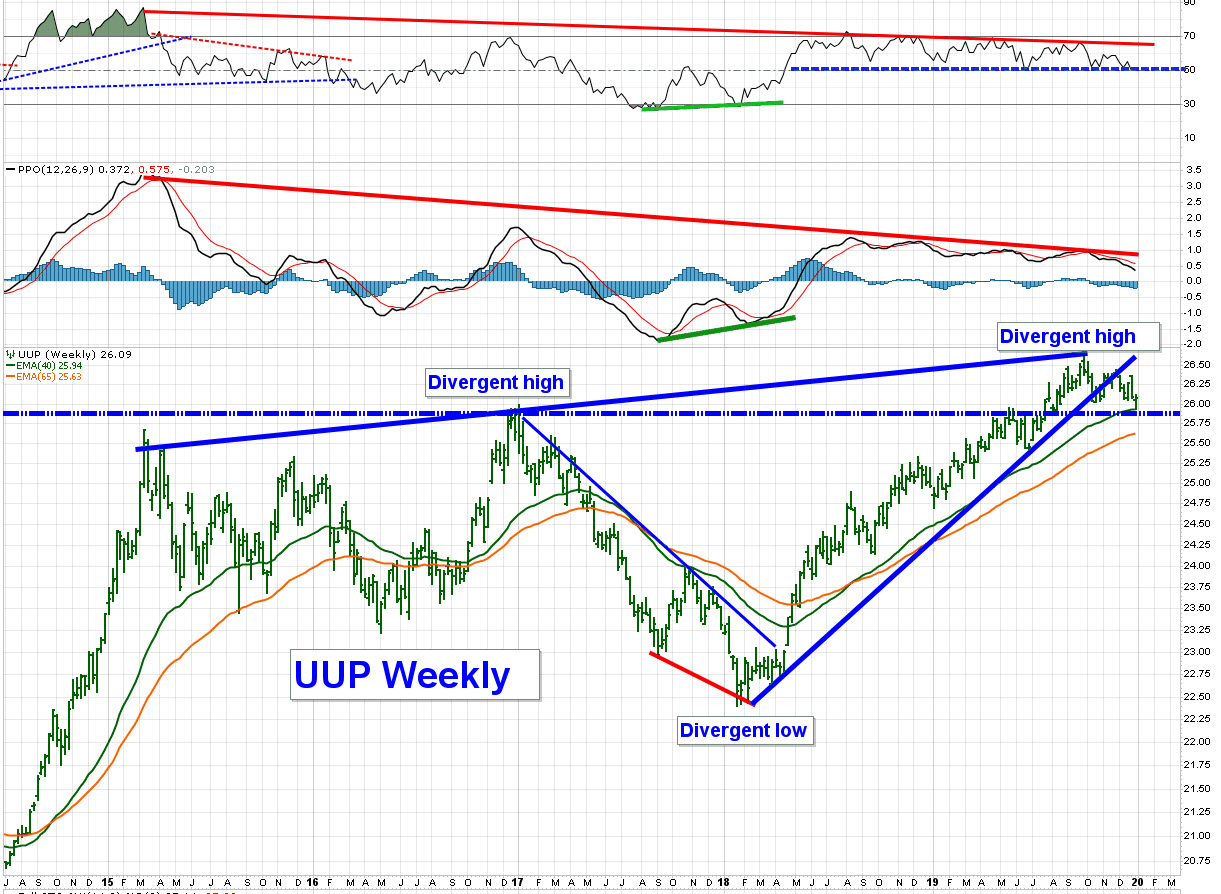 The reflation trade coupled with the Iran disturbance have given the oil names somewhat of a bid.  Below you’ll see the weekly chart of the $XLE breaking above $60.Let’s keep it simple and visual. Prices above $60 are bullish and prices below are bearish.  Traders have a clear line to shoot against on the long side against $60 with a stop below. 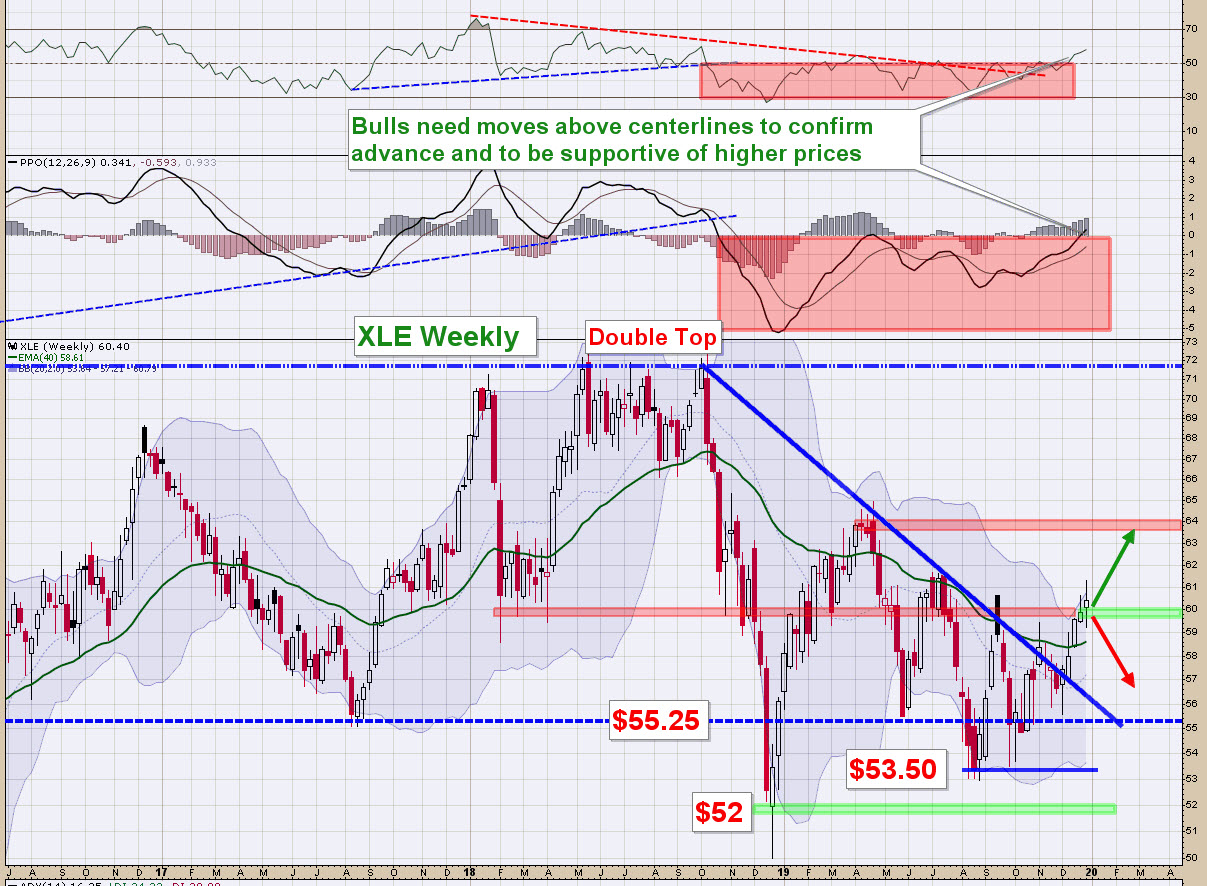 $XOP  daily An ETF with more beta.  One problem with $XLE is the with XOM and CVX comprising about 45% of it, getting big moves is hard. A better ETF to trade IMO, is XOP. THe option chain is liquid and can really move when it gets going.  From the chart below you can see price is just below both the 200ema and lateral resistance. To make it easy, go long above the 200ema, then you can use that level as a stop.  The battle going forward is that supply / demand dynamics say fade the rally, but geo-politics can rip the face off shorts in like 30 sec.  I prefer a long bias on oil / energy against a near by stop. 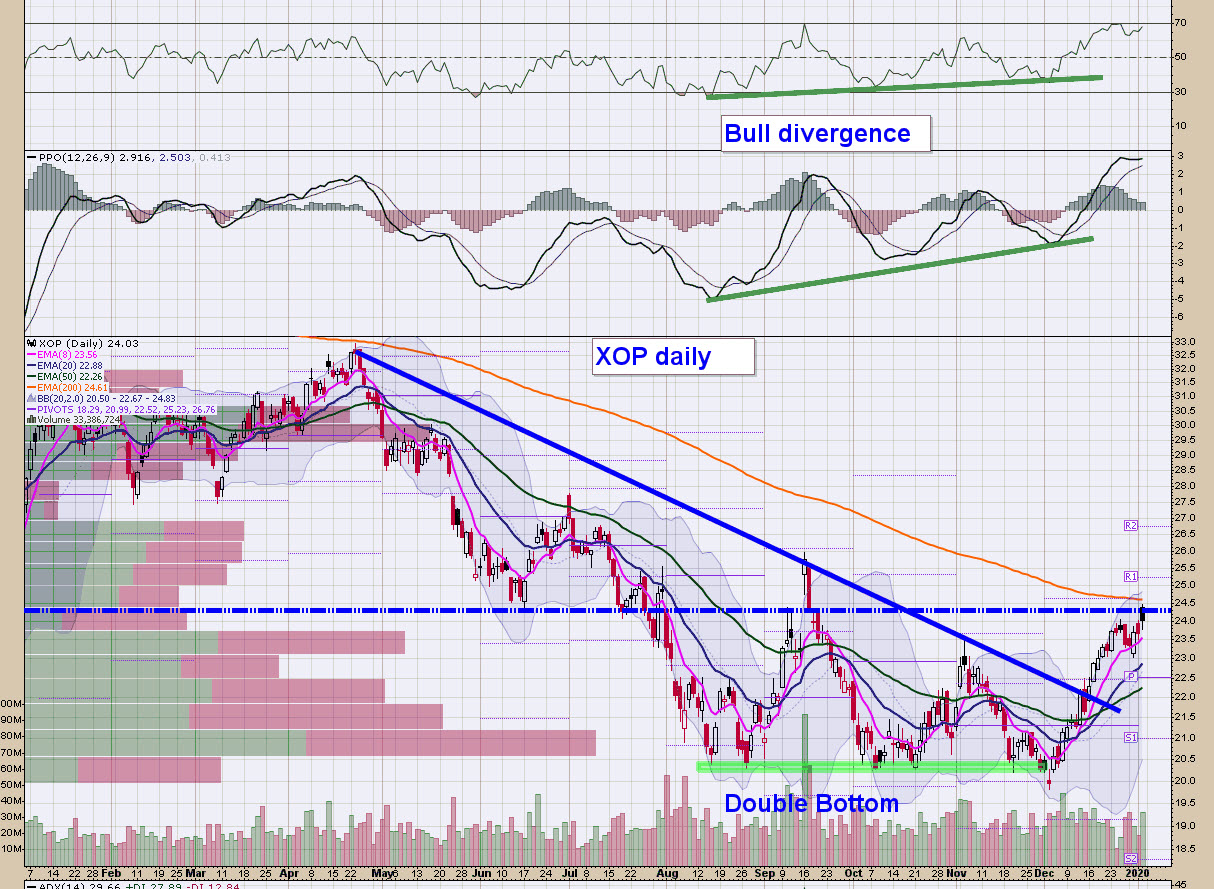 In general, a rising oil price environment is not that great for refiners. The ETF $CRAK tracks the refiners. ( HFC / MPC / PBF / VLO / PSX etc ) While CRAK is not a good trading vehicle, it is a good tracking ETF to watch. You can see the big bearish engulfing candle Friday. Many individual names were off 3-5%.  If you see oil prices rocket higher, a short on a select refiner or two would be another trade idea.  LAst week I proposed a short on PSX. That trade is off to a good start. 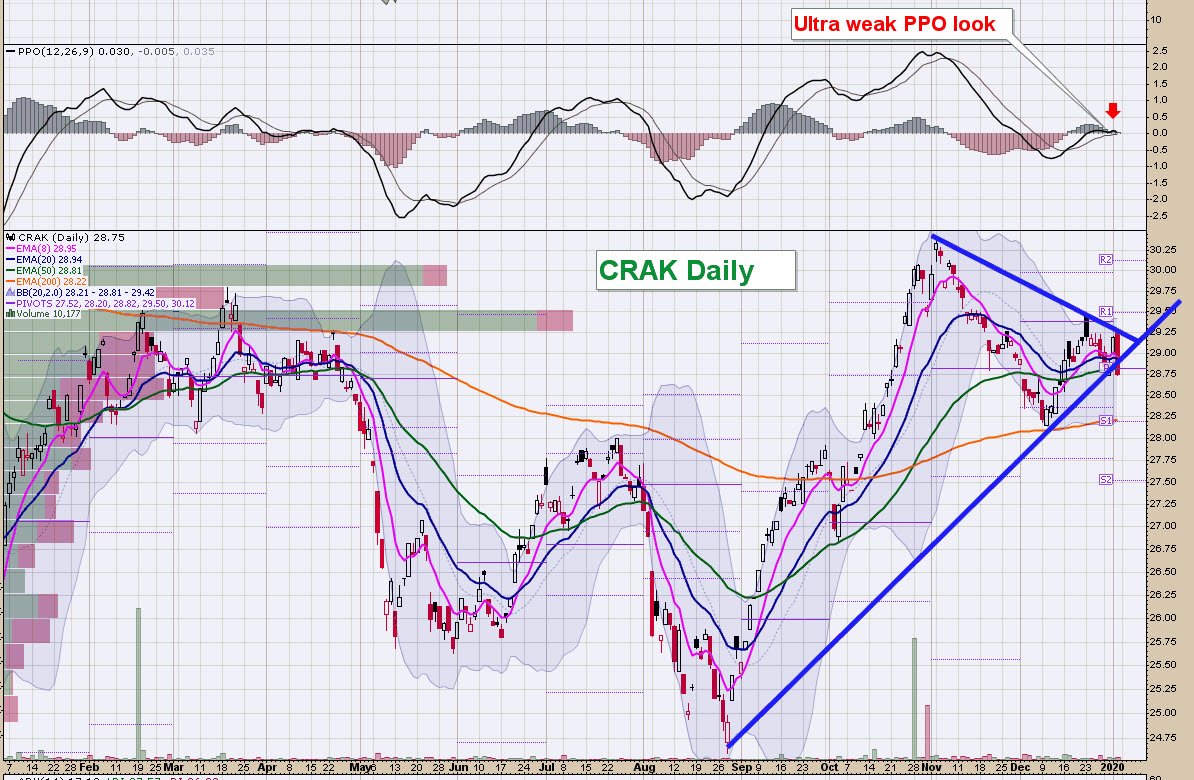 For whatever reason you want to give it, precious metal have found a strong bid despite relative strength in the $USD.  This past week Gold continued with it’s impulsive move higher out of the bull flag.  Any weakness in the $USD in the coming months should provide a nice tail wind to the metals and miners.  With gold and the miners, focus on buying pull backs vs breakouts. Gold has a way of breaking hearts so good trade location is important. 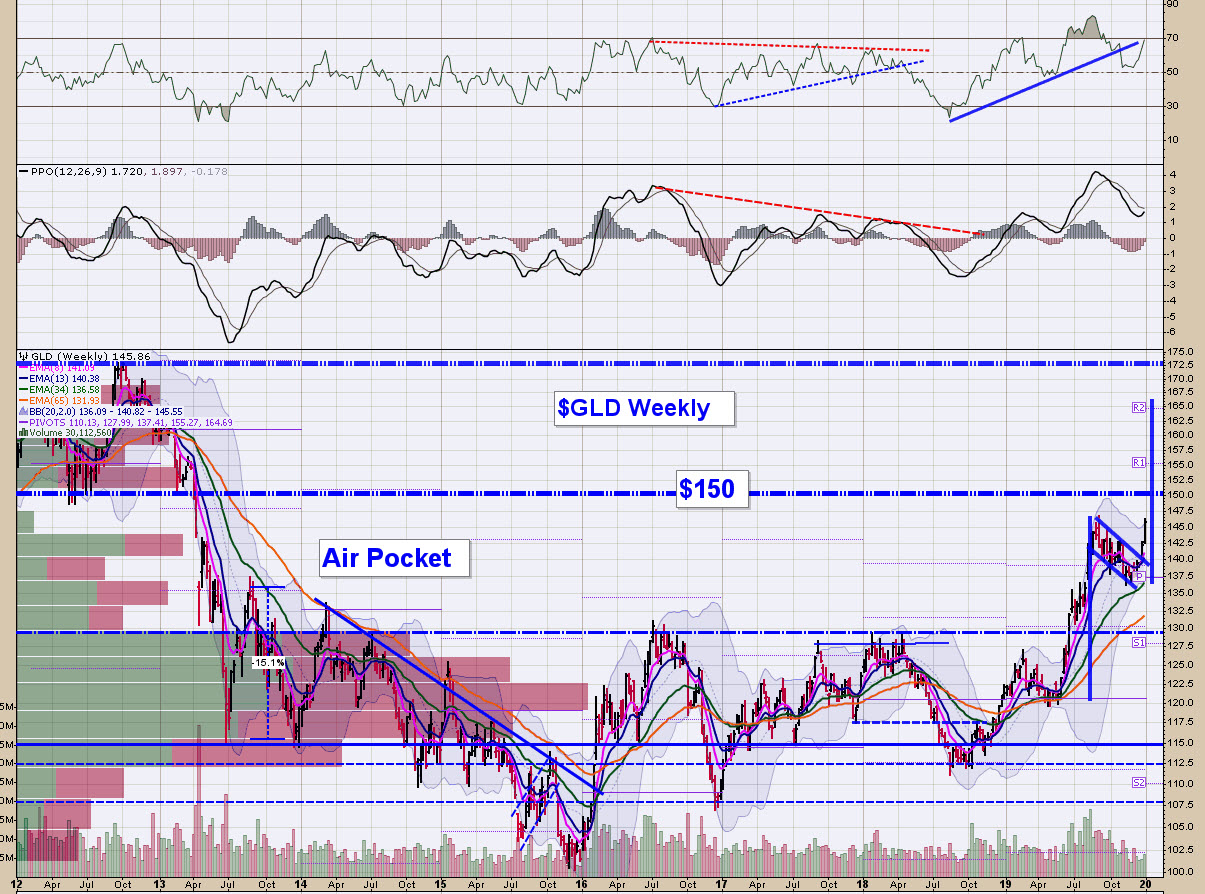 While continuing to advance, Friday was a frustrating day. With Gold up $20+ you’d have thought $GDX would have had a big day. It didnt.  While no technical damage was done, still a disappointment. I am still long but am paying closer attention. Would not like to see price back into the $28’s. 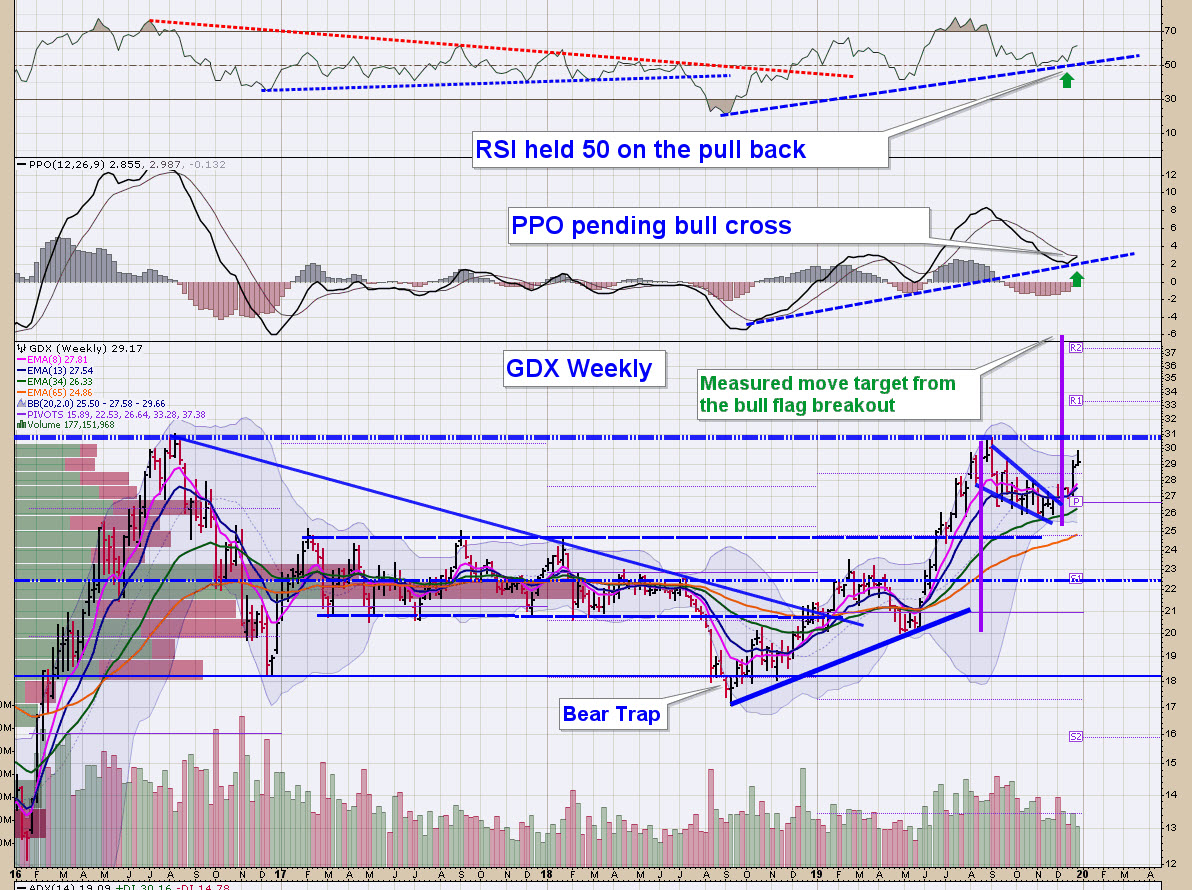 And finally Tech and financials

Having ideas about the Fed, Gold, Energy etc are all well and good, but from a weighting perspective only Tech and financials matter. They are basically 50% of the market. And of the 2 , I think the tech sector is most important to watch.  If the bears can’t break big cap tech, this market simply will find it hard to go appreciably lower.  Watch AAPL, MSFT, AMZN, GOOGL and FB.  If these stocks stay strong, stay long. If you see the rug being pulled in these big names, get defensive very quickly. AAPL and MSFT are particularly over -extended, but they have been for a while and it hasn’t mattered. It eventually will. Just keep your head on a swivel and your stops tight. If you do those 2 things you will not be appreciably hurt when / if the turn comes.