Stocks to Trade focuses the Sector Spotlight on Fertilizer which is gaining momentum and is looking to move higher. Key levels and trading locations are provided, along with trading plans and timely commentary to keep you on the right side of the trade.

Commodities and the Scarcity Mentality

Buying 3 years worth of toilet paper at Costco when the pandemic hit is a great example of the scarcity mentality.  Make sure you get yours first. Last week China offered us another example when it directed it’s utilities and other major industrials to gather energy and commodity inputs “at any cost”.   When the scarcity mentality kicks in, the paradigm shifts from “How much did you pay?”  to “Don’t be the guy who runs out”.   The scarcity mentality drives inflation. Its the belief that what you want to buy will either not be available or more expensive in the future than it is now.   It not only applies to commodities, but any and all inputs imaginable….like semiconductors or in this instance Fertilizer.  In addition to paying whatever it takes to get inputs in the door, governments also move to secure domestic resources.

From sept 30 in the Progressive Farmer.

OMAHA (DTN) — As the 2021 corn and soybean crops are coming out of the fields, the supply situation for fertilizer and other chemicals is shaping up to make 2022 an expensive year for inputs.

The move by China earlier this week to ban phosphate exports until at least June of next year puts even more pressure on global phosphate trade. The U.S. doesn’t buy much phosphate from China, but the country represents about 30% of world trade. Now China’s traditional buyers will be looking elsewhere.

“And it just continues around the world as everyone goes other places to buy, and then they run out,” said Josh Linville, director of fertilizer for StoneX. “The ripple effect is that the entire world trade balance goes down, and there’s just not enough out there to go around.”

Unlike consumer-based price increases, all these increased costs are passed on to Agri- businesses.  The stock prices of the big fertilizer companies have been on a run but I don’t think they’re finished going up.

For these charts I chose to show the weekly and monthly charts to give you perspective on where these stocks have been during the last run 10 years ago. I dont think its unrealistic to think there is the potential to head there this time either. In fact, $CF has all ready taken out its all-time high, so its in blue sky territory. $MOS and $NTR are in various stages of breaking out.  I’ve shown the targets above. Don’t know what to say about $UAN other than if that weekly structure is a bull flag, its pointing way up there.  $200 would not be out of the realm of possibility.

At the very least, put this sector on your radar. Depending on how you like to trade and your preferred timeframe, look for an entry point. THat can be on a breakout or a pull back intoa support level.  I honestly dont think the name matters. These birds of a feather are flying together. If you are one to dive into the fundamentals of each company, by all means help yourself. You may uncover nuances that may make a difference for you.

Disclosure:  Many in our trading group are long either CF or MOS.  Nothing against the others, we just hit on these first.

As a side note, look for upward pressure on all the AG commodities.   $DBA, CORN, WEAT, SOYB as we roll into the fall. 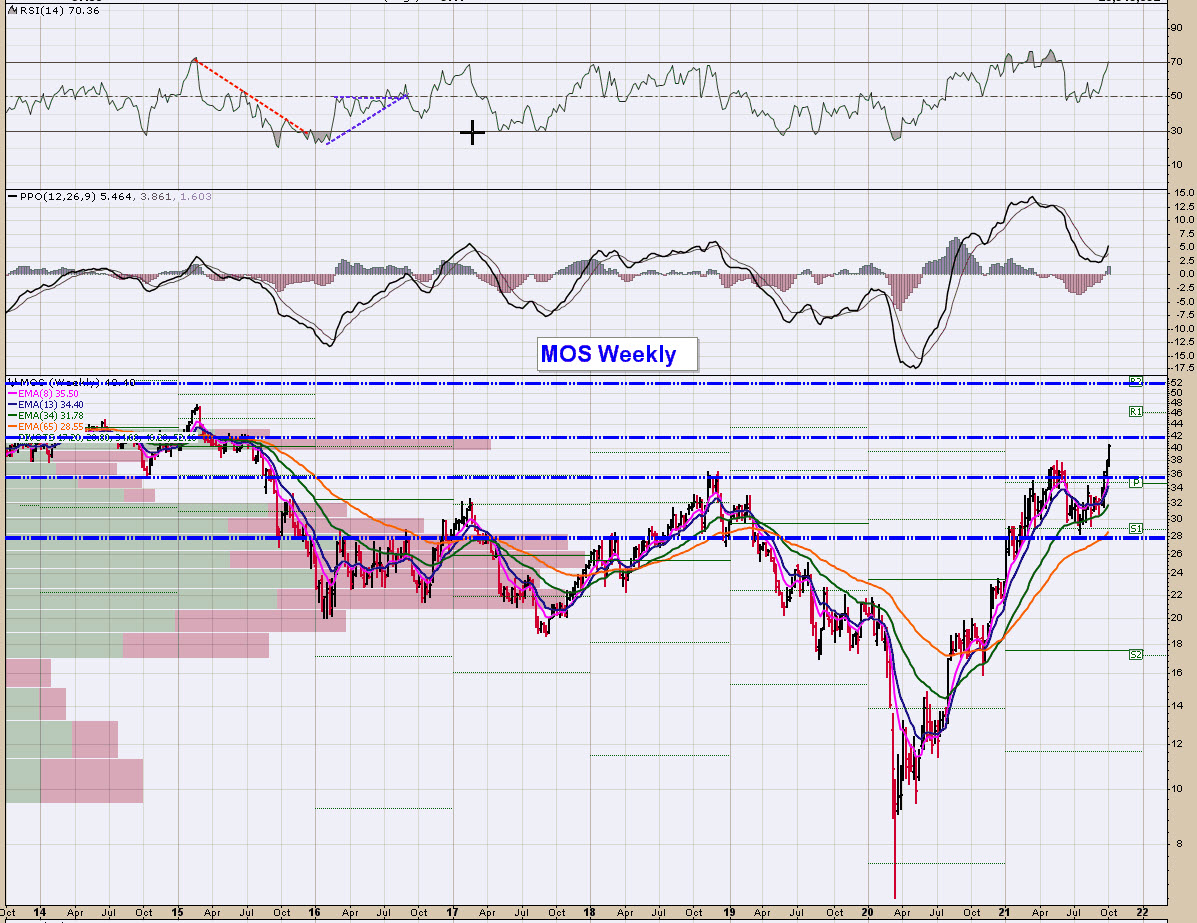 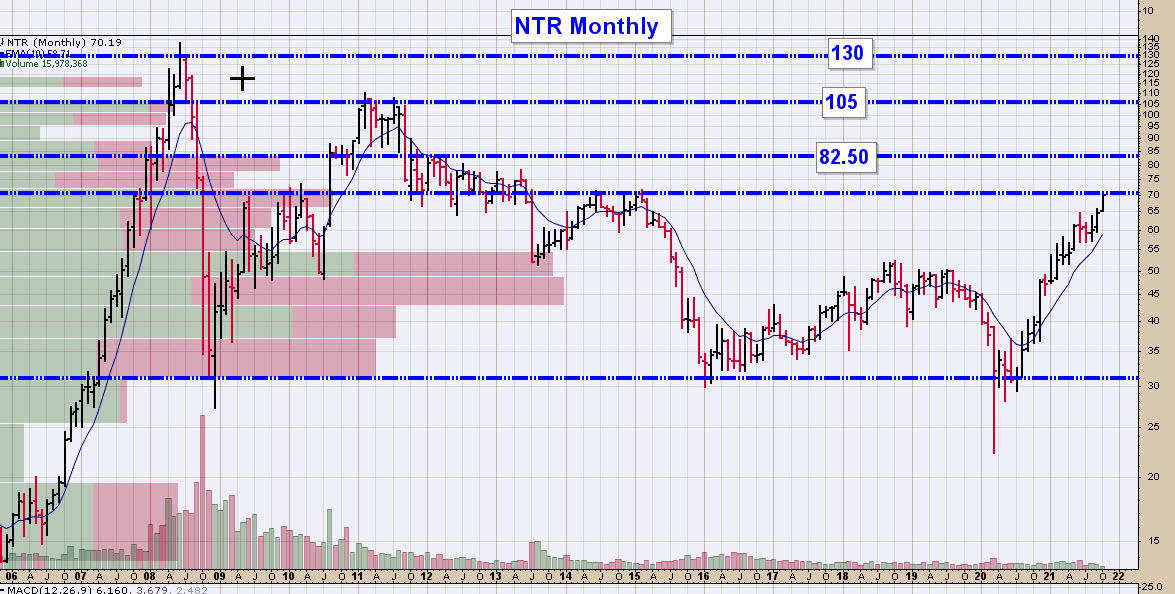 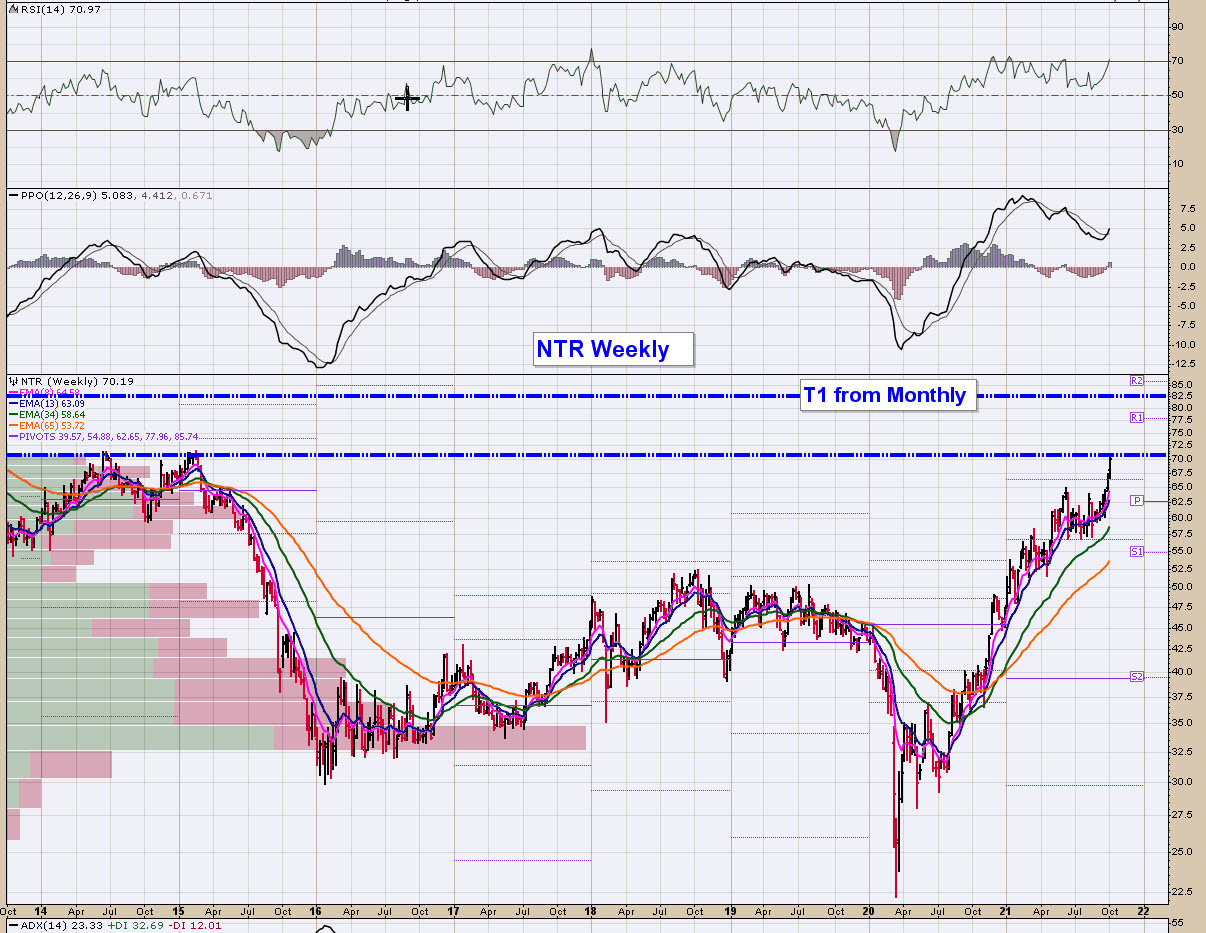 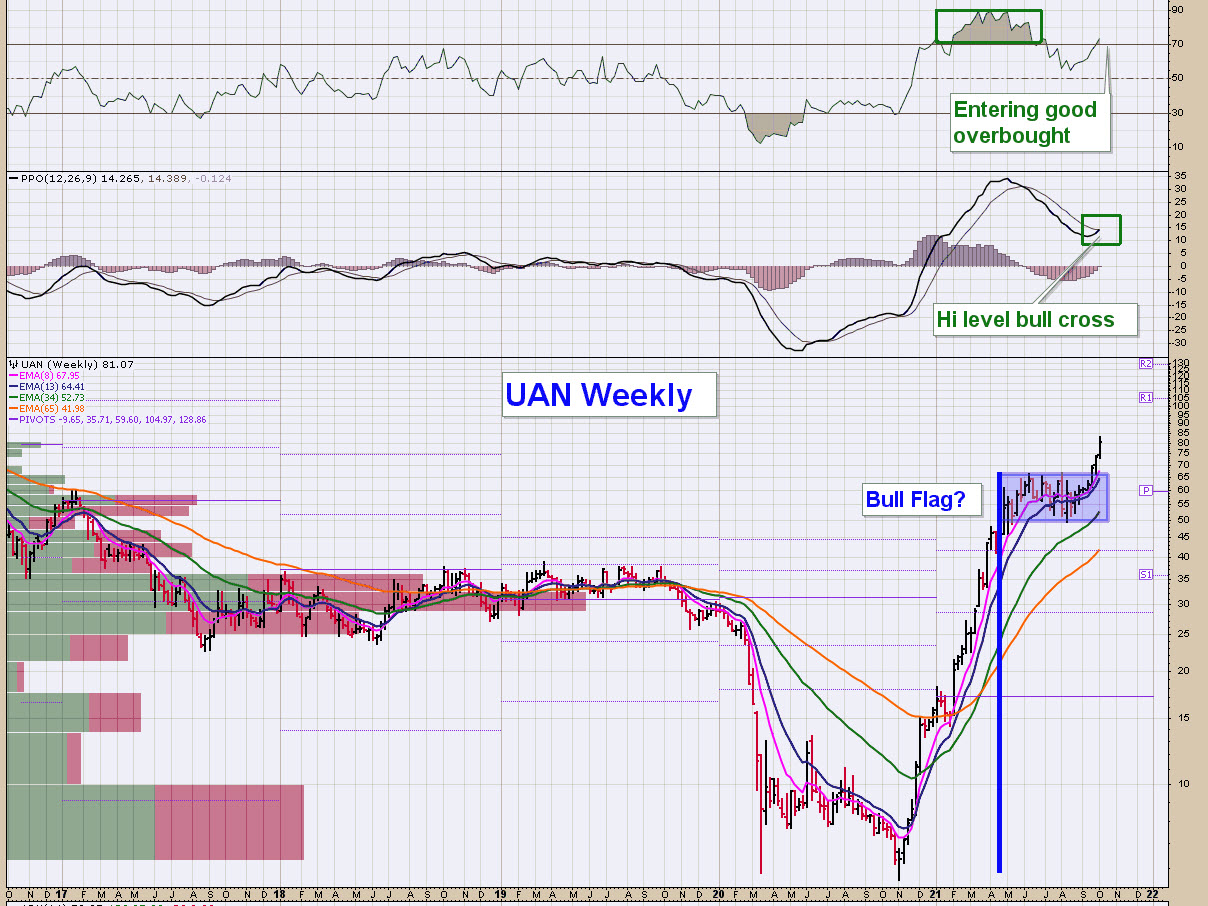 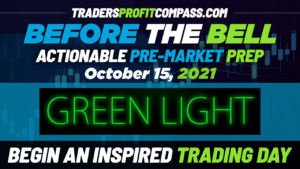 Before the Bell Oct 15

Before the Bell Oct 14 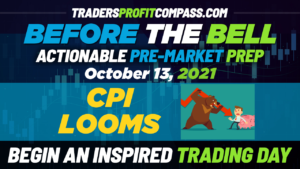 Before the Bell Oct 13