The Daily Profit Compass  provides the stock market analysis for the day. Key levels and trading locations for the indexes are provided, along with trading plans and timely commentary to keep you on the right side of the trade.

In my opinion,  KMX, NKE, CTAS, ACN, and MU are the most important names to follow in this light week of earnings. 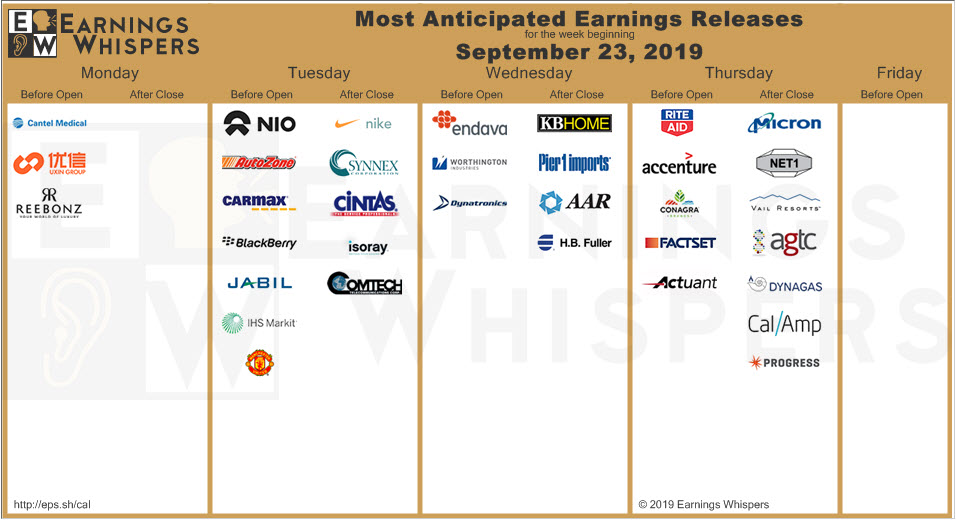 Market Recap:  The Q’s were off 1% and led the market lower on Friday although SPY and IWM were off much less.  The market accelerated to the down side in afternoon trading when the Chinese delegation cancelled farm visits.  Chinese government officials said the cancellations did not have anything to do with the trade talks.

The safe haven assets were all higher Friday.  GLD / SLV / TLT / $USD all higher.   Oil was lower by a few cents.

STX may be one to watch for follow through. At their analyst day they communicated 2020 revenue and margin projections that was not received well.

China News:  China officials say the cancellation of the farm visits on Friday had nothing to do with the trade talks which are going great.

Currency News:  The Euro dropped below 1.10 on the back of weaker data out of Germany whose MFG PMI dropped to 41 from 44.  Clearly still contracting.

Bonds.   Bonds made an impulsive move higher on Friday and ran hard into the close.   The next target is $143;  First support is $141.  The bear flag look seems invalidated at this point.  While TLT can certainly come down from here, the price pattern has diverged from the classic bear flag look.   I have a small position in TLT Oct 141 calls

$WTIC / $USO   Oil seems to be holding a bid now that it is becoming clearer that the damage to the Saudi infrastructure will take longer to fix than early estimates projected.  THe levels on USO however stay the same;  Nothing changes on the chart.  To my eye, above $12.10 is a long; below $12 is a short.   Odds are the gap completely fills sooner rather than later but there may be yet another rally before then. The nice thing is, the levels are well-defined.  Follow them from level to level.

Gold    Fingers crossed that gold has found a base and is moving higher from here.  Futures has gold up $13 this morning at $1528.  I have support at 1500 with $1492 being my last line in the sand.  I have been hung out to dry on my miners. Need gold to quickly move higher.

Bulls remain in control unless / until prices return to the consolidation area ( below $294 in SPY and below $189 on QQQ )   Price has stalled. THe week following the FOMC and options expiration often are defining week’s for near term price action.

Risk off trades :   TLT and Gold both had nice gains on Friday   Watching closely.

SPY had its dividend pulled out of price on Friday. It has therefore changed all the key levels on the chart.    Near term, $297.50 is the gateway to lower prices while $301 and higher will open path to new highs. 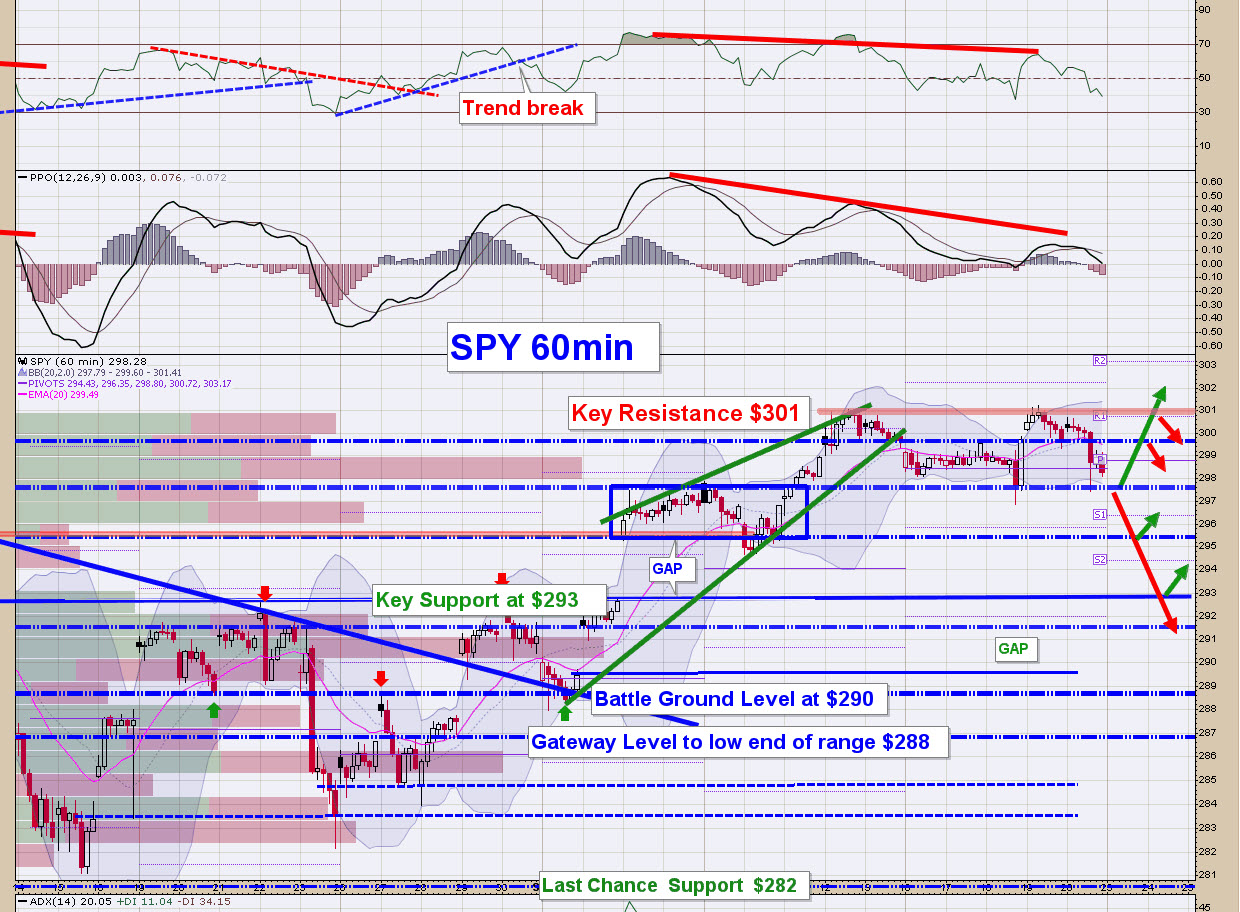 The doji candle on Thursday turned out to be a good tell for the Friday selling which brought price down to an important support level at $191. .  A drop below $191 would favor another test of $189.  The FAAMG names remain fairly weak and need to get going if QQQ’s are going to have a material and durable advance.

Swing Traders:    $191 is a key level to hold in any pullback and should be regarded as a near term bull / bear pivot.   A move below $189 would be very bearish.  Any moves above the old high would be bullish. 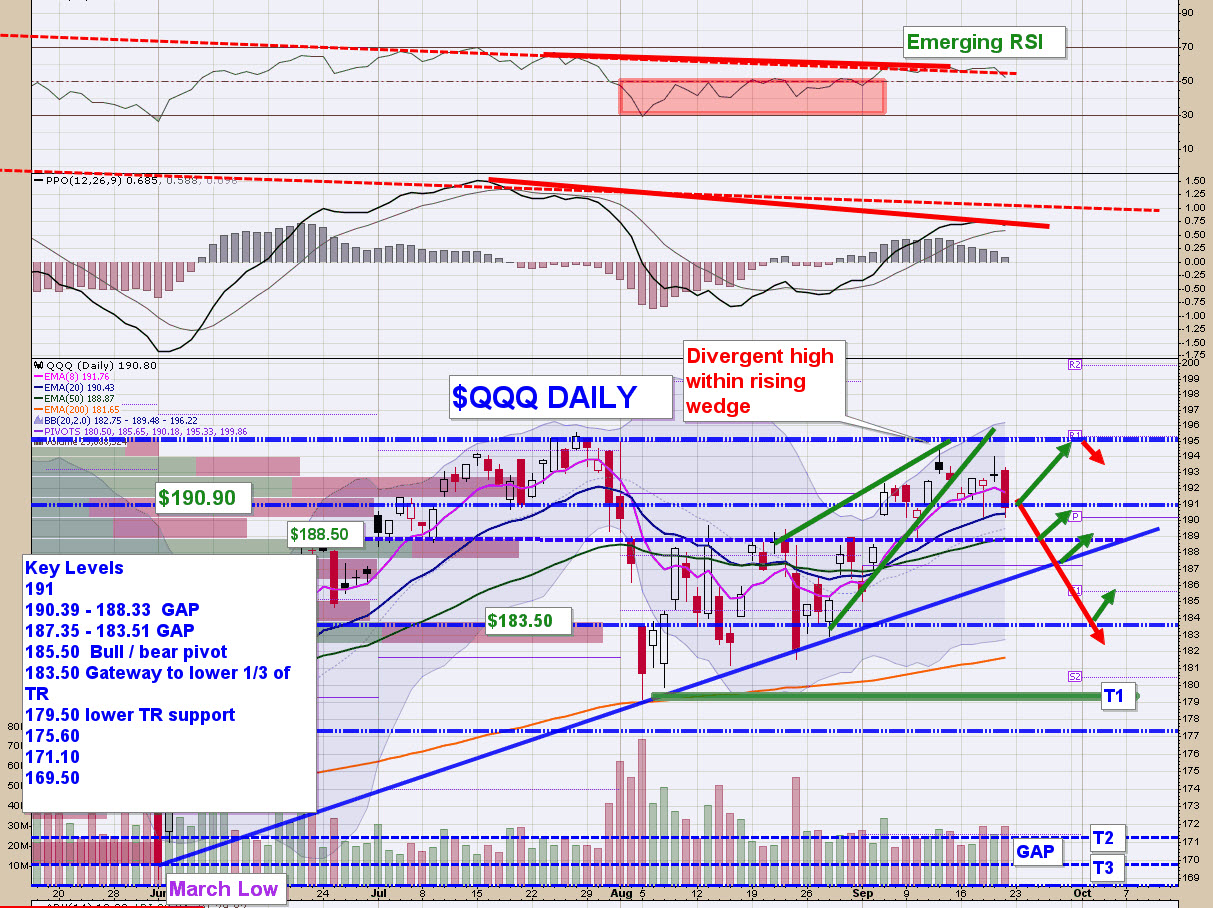 The thing that should concern bulls is the both RSI and PPO momentum are heading out of town.  Use $191 as your intraday bull / bear pivot.  I’d get short below $191 and position for a possible move to $189.  Prices above $191 are short term bullish. Bigger picture, prices above $189 are bullish while a dip back below $189 would be bearish because it would indicate a failed breakout.  Use the marked levels for reference when actively trading. 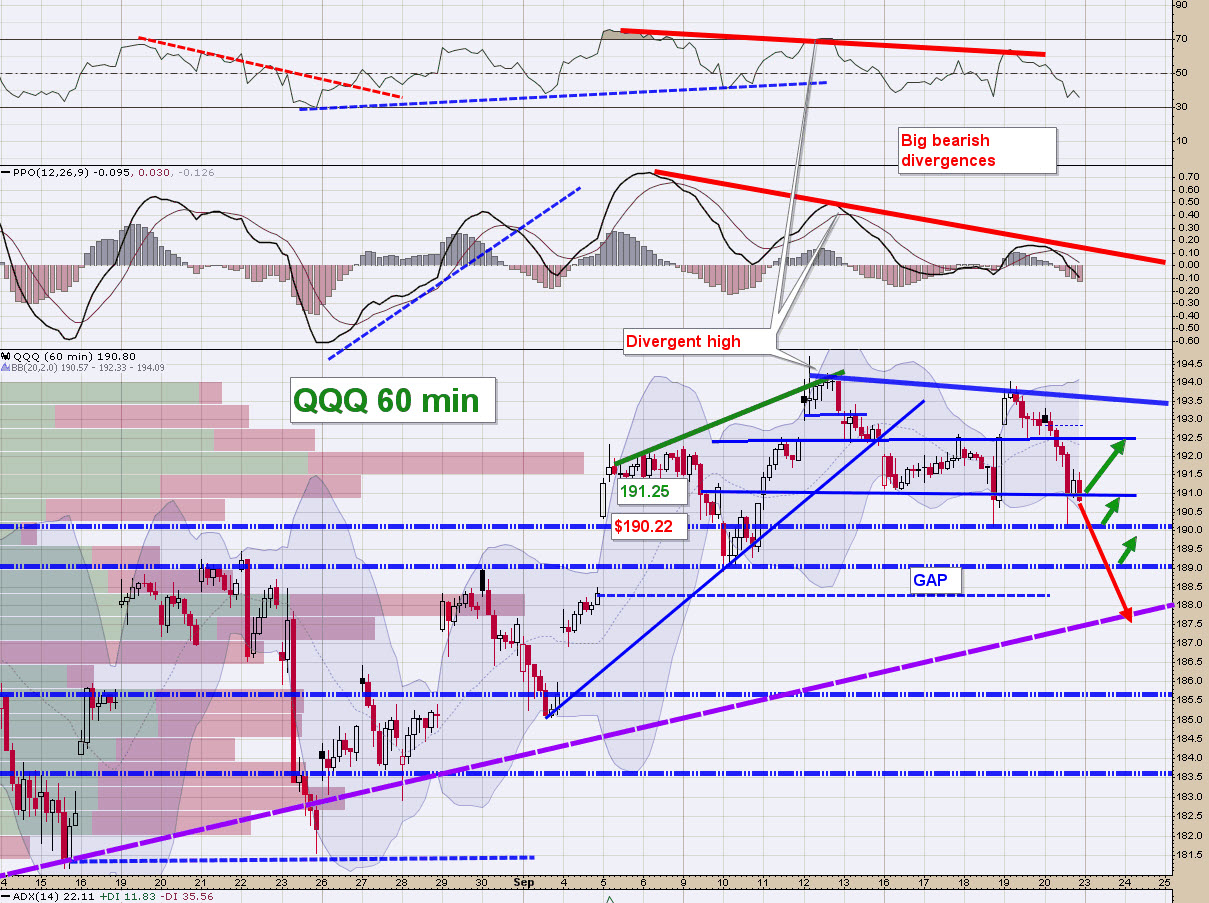 Price remains pinned under $158.  For me that is the bull / bear pivot for a longer term move.  A close above $158 would be a bullish development and would favor higher prices.  But until that happens, I favor a move lower. 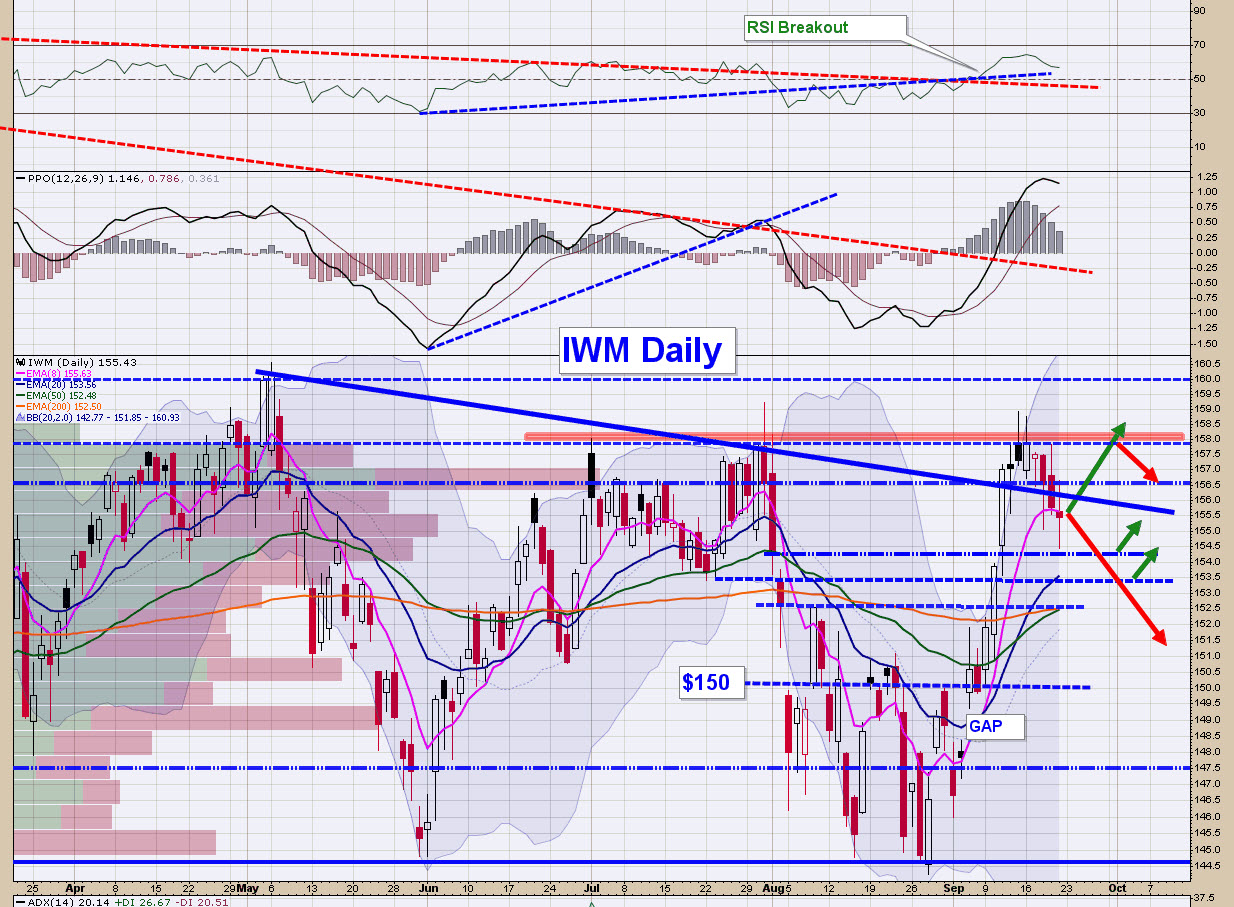 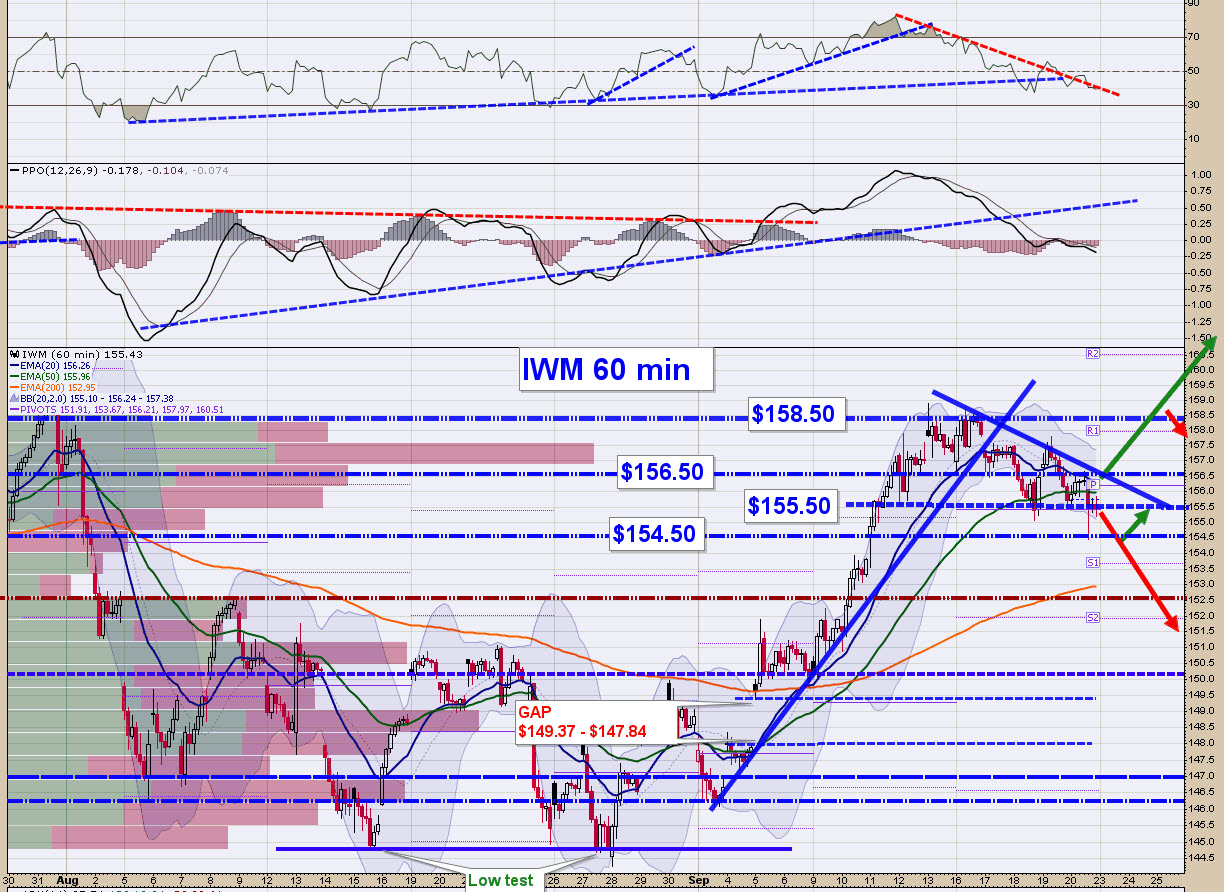 The intra day short we had on ROKU Friday worked out well.  I was sitting in the Oct 4 $115 P and was able to capture a double.  If you were in the Sept 27 or even the Sept 20th puts your percentage gains were likely much much higher.  The thesis for a fast move through the gap turned out to be right.  Anyhow, I hope you participated. It was a great trade.  The trade reminded me of a quote by the Market Wizard Ed Seykota who said “One good trade pays for em all”.   I call them magic eraser trades because it erases all those little losses when price does not cooperate with your grand plan and as you know, we’ve had our share lately.

I decided to open a small ROKU Oct 4  $105P   into the close on Friday.   Will see if there is any downside follow through from here.

Sent a trade idea out on XLNX under separate cover.