The Daily Profit Compass  provides the stock market outlook for the day. Key levels and trading locations for the indexes are provided, along with trading plans and timely commentary to keep you on the right side of the trade.

Costco on Thursday highlights a slow week of earnings.

Market Recap:   The indexes saw more short-term technical damage inflicted during Wednesday’s trade with  SPY / QQQ seeing nearly 2% losses and IWM seeing a 1% loss.  SPY and QQQ are testing their 200ema’s while IWM is below all it’s ema’s.  While nothing goes straight down or straight up, the indexes look poised for a test of the August lows.   The question isnt when; it’s will it hold?

All 11 sectors were down with XLB, XLK, XLI,  and XLF leading the downside move.  I know it’s shocking, but XLU and XLP even had losses and in the case of XLP testing their weekly trendline which is a steep one.  Watch XLU and XLP closely. Their near parabolic charts leaves them subject to massive downside if / when they crack.

All the red drove money into gold, bonds and the VIX.  The VIX in particular is poised for higher ground with a close above 20. I’ve been posting the VIX chart recently with the technical developments as they emerged.  It remains in the territory where a whoosh sell event is possible that would spike it.

One thing that has been noticeable the past 2 days during this sell off is a lack of meaningful bounces.  Usually at key support locations you’d expect buyers to make a stand and bounce price to a 50% or 61.8% fib retracement level. No so lately. Most of the baby bounces have not even reached the 38.2% fib level. Shows a lack of commitment by buyers to step in.

We’ve got ISM non-manufacturing and Factory Orders data this morning.  If for some reason the ISM prints a bad number, I’d suspect a giant red bar.  Jobs Friday is on deck for tomorrow which will also be a data point to potentially move the needle.

While I favor lower prices going forward, the Oscillators are flashing a bright yellow light cautioning Bears not to press their luck here with mildly oversold readings.  If we get a “whoosh moment”, consider peeling out of your short positions because every down move now pulls the rubber band back even further, favoring a rip to the upside.

Here are the $NYMO ( NYSE ) and $NAMO ( COMPQ ) “rubber band” Oscillators.  Over many years and many losses, I have learned not to fight NYMO.   When NYMO and NAMO go into over bought or oversold territory, its time to be scaling out of positions, not piling in.

Both oscillators have moved to early oversold conditions.  Does not mean the rubber band cannot be stretched further, just means they favor a pending bounce.

Retail was slaughtered with the XRT down nearly 3%.   $DAL rocked the airline sector when it warned of higher costs eating into margins.

Hong Kong News:    The police announced “marshal law lite” as it bans the use of face masks during public events so identification of troublemakers is easier. Dont forget that on every corner in HK are cameras with facial recognition software.  No doubt, they’ll start pulling people off the street now.  This powder keg will get worse before it gets better. week.

Bonds.  Holding $143 is key to keeping the chart bullish.  Price holding above $144 in the premarket.  Door is open to higher prices but ISM, factory orders, and Jobs report are on deck.  I am long TLT oct 143 Calls.

$WTIC / $USO   7 consecutive days of selling.  The downtrend line  should be a good reference for active traders. Below the line and below $11.10 keeps the chart bearish.

$GLD    Gold recaptured $141 and is making a move to test the topside of the down channel. A break above would trigger a buy signal.

Price closed above 20 and is poised to explode if the selling in equities persists.  Notice on the chart that when price emerges from low levels to 20 for the first time in the cycle it doesnt stop. Usually spikes further before pulling back. 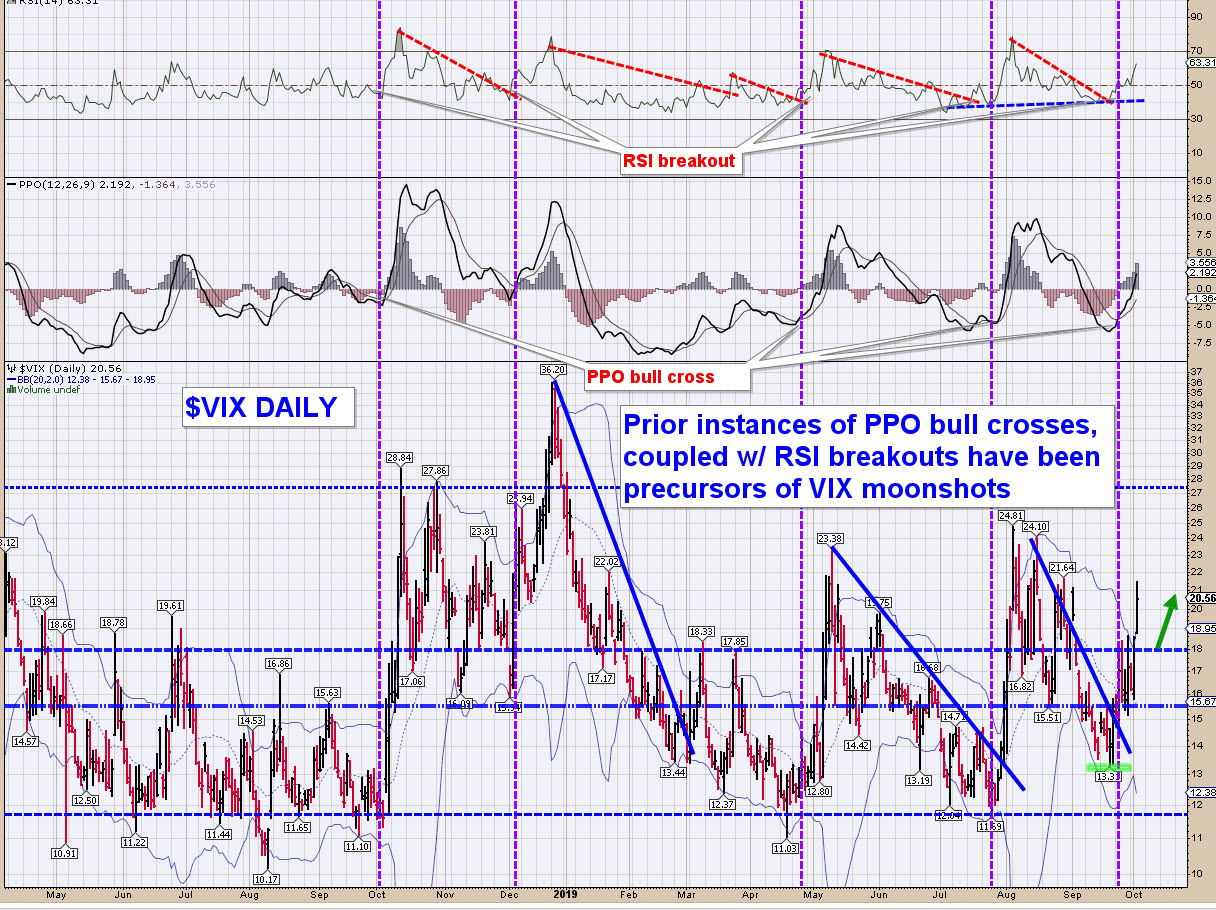 Holding existing shorts but will likely not be piling into new swing shorts with the oscillators stretched.  Will still play downside intra day but plan to reduce overnight exposure.  If we get a whoosh moment, i plan to cover into that decline.  If that whoosh stops at a well-defined support level, will likely look for a short term bounce.

As you likely know, I dont typically hold individual stocks through earnings where there is no edge. Instead, I go into ETF mode as a way to play earnings for sectors.  It eliminates single stock risk but allows for participating in sector moves. For instance, $KRE or $KBE for bank earnings.  There is an ETF for everything. Choose ones that are liquid with tight option spreads

Risk off trades :   Should benefit while equities wobble.

Giving you a clean, big-picture look on the daily this morning. Yesterday’s move gave us an unambiguous sell signal on the break of the major uptrend line off the December lows.  If you had any doubts about the set up, now you dont.  This is a sell signal. Only the 200ema stands in the way of the August lows.  Keeping all possibilities at the forefront, recapturing $292.50 and the uptrend line would be hugely bullish and prove yet again the pull back was a dip to buy.  The technicals now favor a bearish bias. 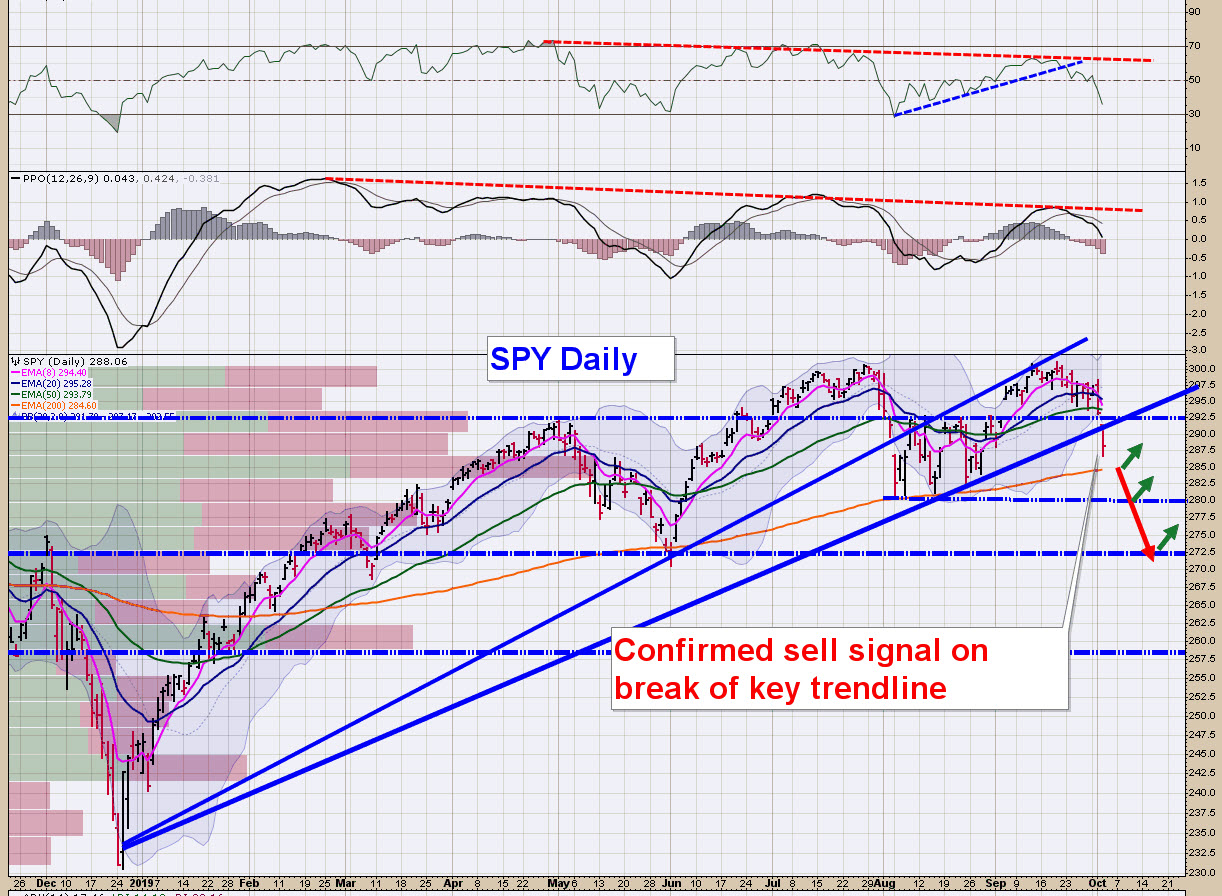 SPY 60 min:  Some very clean levels to shoot against. Although it isnt marked, make note of the open gap above.  A break of yesterday’s low will likely usher in a fresh selling wave. A bounce will have to content with several OH resistance levels before reaching the gap opening. 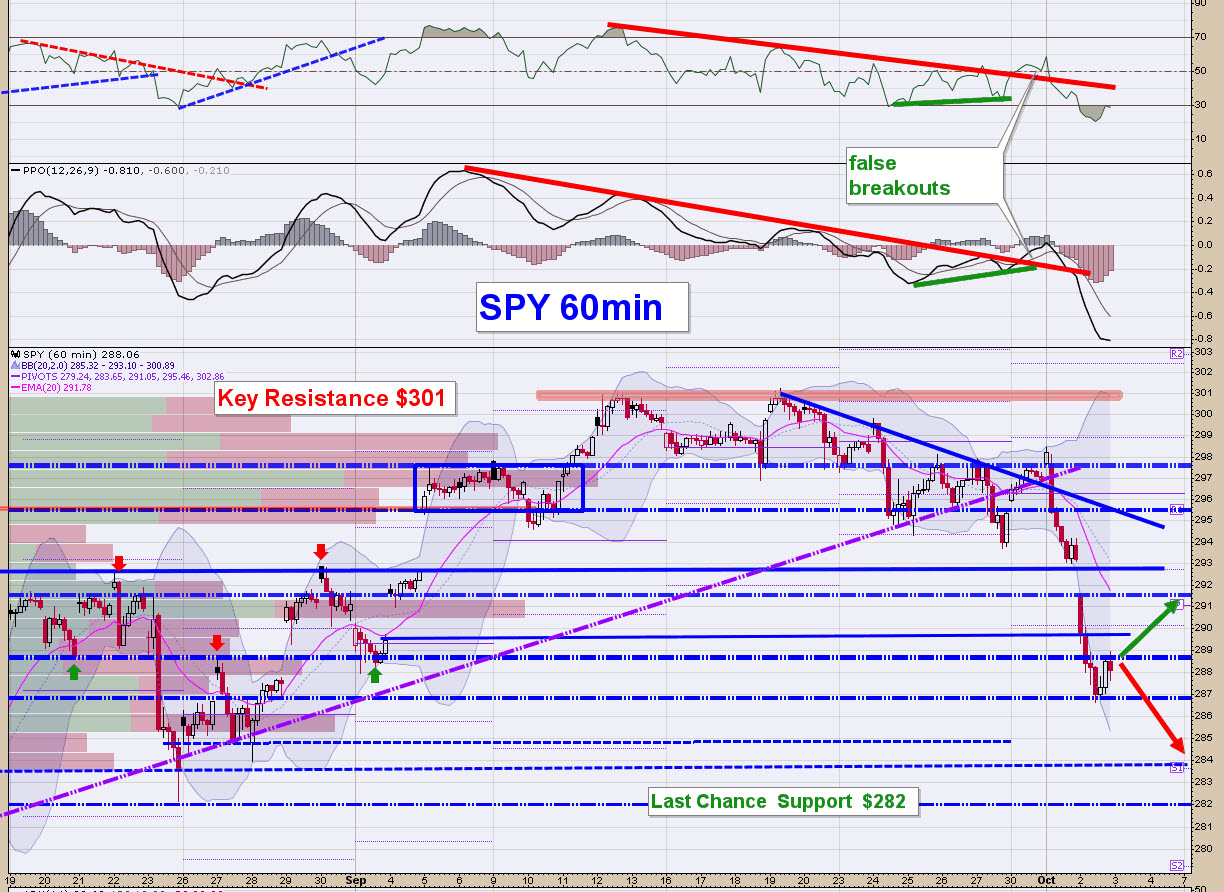 Again, a clean look at QQQ below. That is a sell signal, generated on the break of trend with a dramatic gap down.  Like SPY, QQQ would need to reclaim that uptrend line to flip the chart bullish again. That said, you should almost expect a back touch of that uptrend line before a wholesale sell off happens.  That would fill the gap and complete unfinished business

Swing Traders:    Maintain a bearish bias. Look for opportunities to fade rips / bounces and cover into defined support zones.  A break of the June low would likely result in cascade selling.  That said, the June lows will likely be defended.  For today, $183 the bull / bear pivot level with the 200ema sitting at $181.80 where i’d expect a bounce. 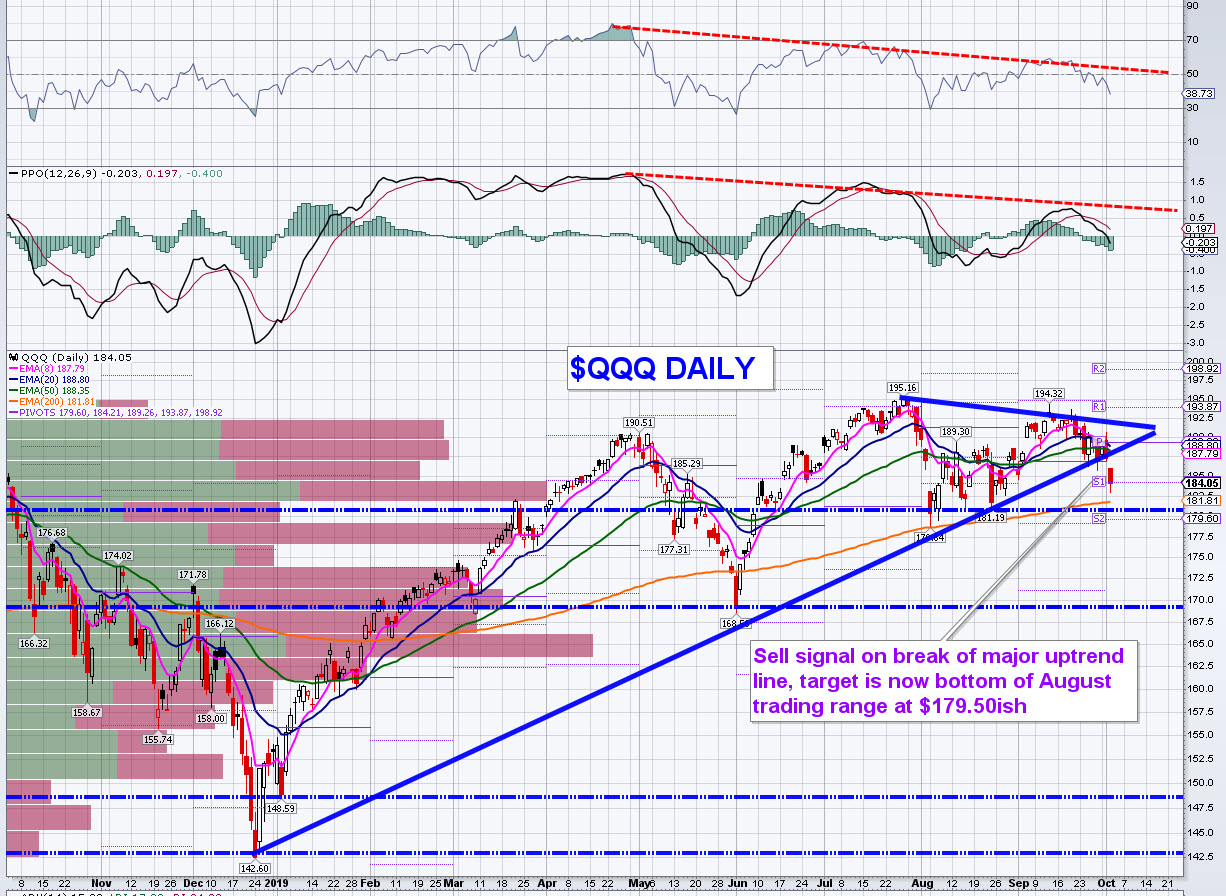 A break of yesterdays low likely opens a trap door for more selling. Several layers of resistance stand between price and a run at a gap fill.  If we break yesterday’s low, get short / stay short with a stop just above.  If you got long into the close yesterday, its fine to maintain that long against the low with a stop just below.   $183 is the bull / bear pivot for today. 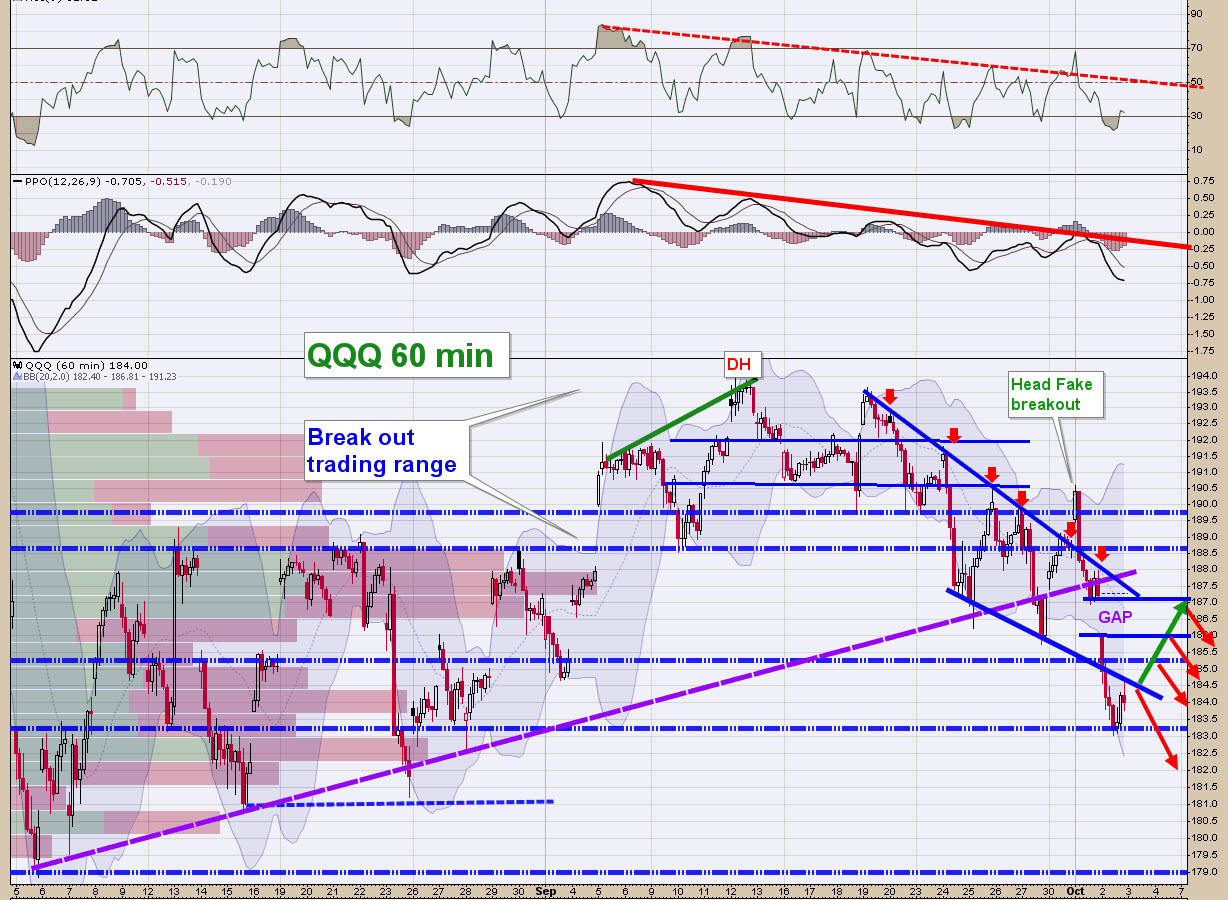 The trading range couldnt be more defined than it is here. A break of the August low and the bottom of the range targets $131 on a measured move basis.  Even though IWM has been a laggard, price is still above trend so no outright sell signal is yet given.  Once price drops below trend then a sell signal would be triggered. 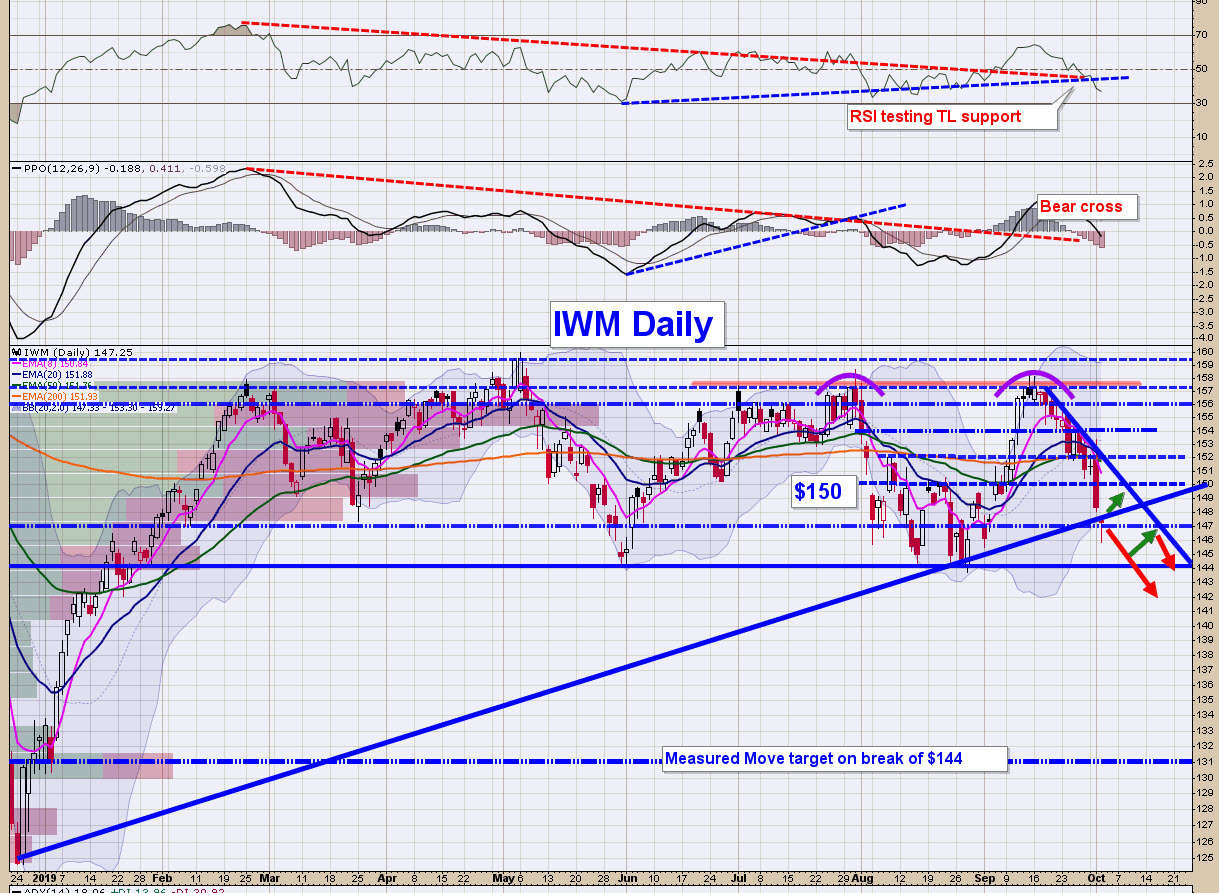 I quick gap fill overhead would complete unfinished business but if that does not happen, a break of $146 opens the door to $144.50.  $146 is the bull / bear pivot. Above ok for bulls, below and bears take over. Maintain a bearish bias even when playing bounces.  The trend is down. 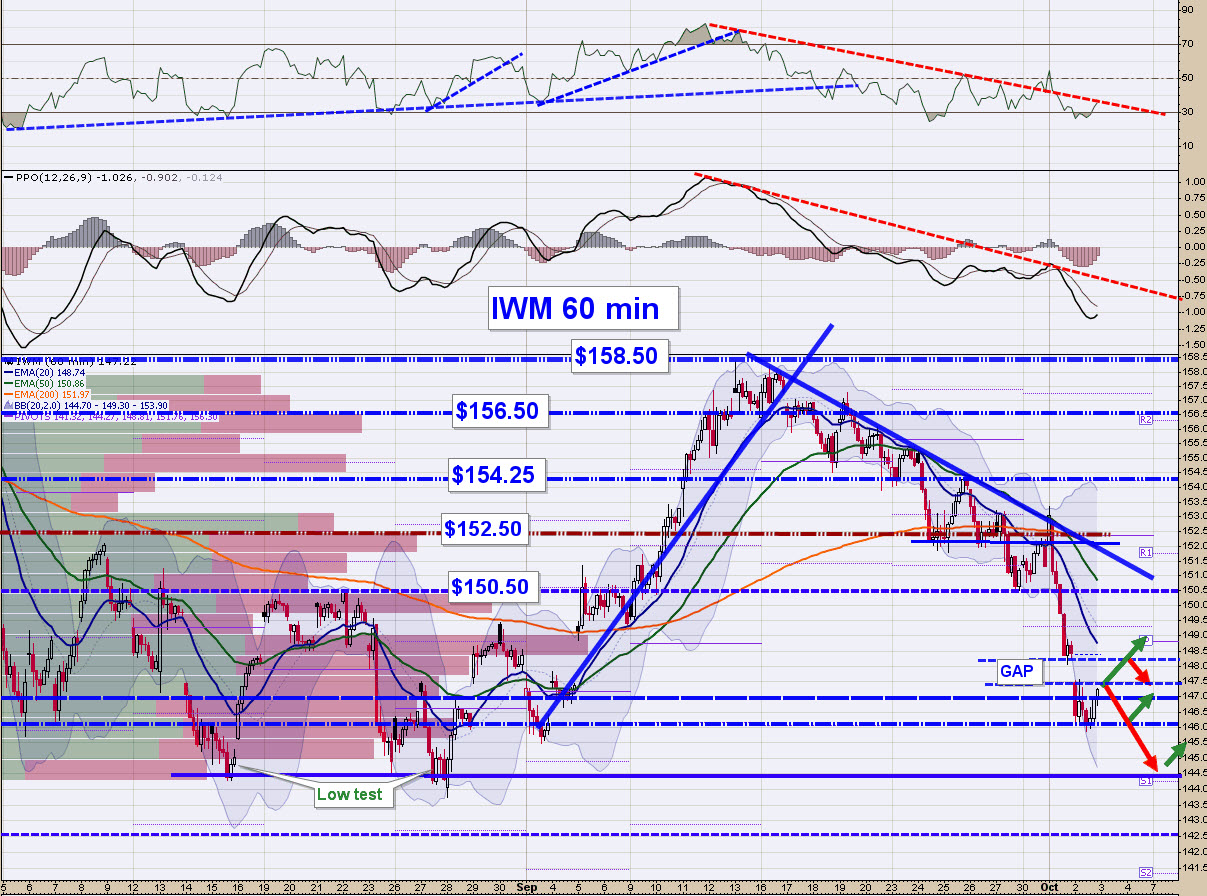 $CAR triggered yesterday on the break of $27 and was down 5%.  My alarm fired but i was busy and forgot about it;  Terrible mistake.  If you got it, stay short against $27. 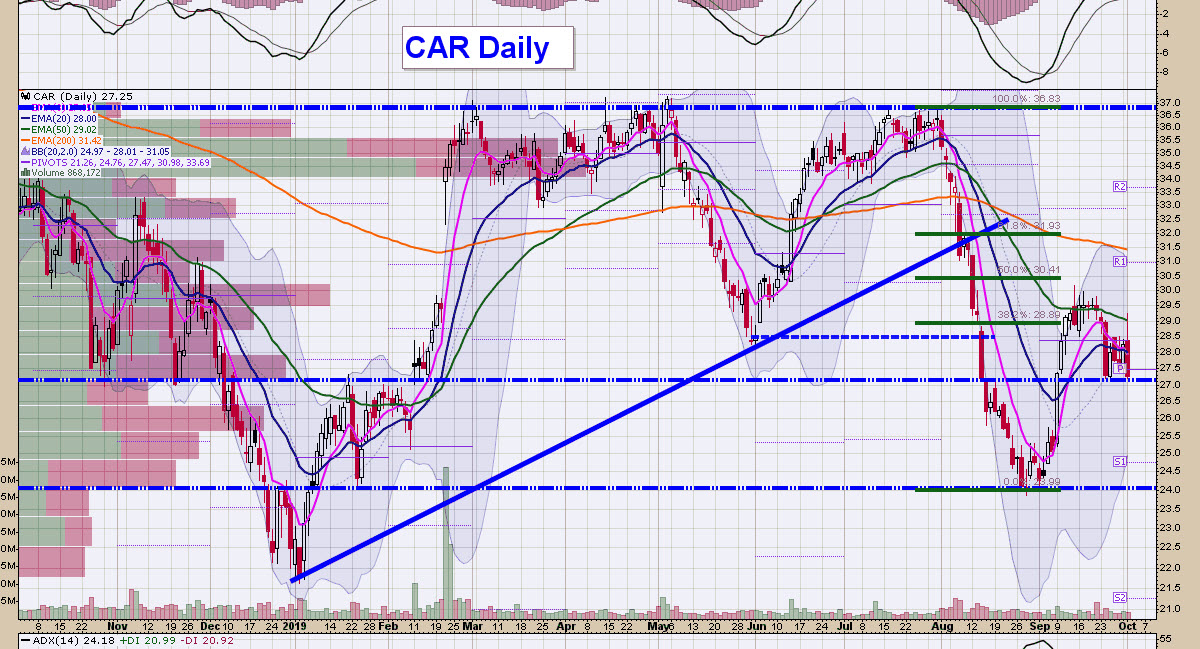 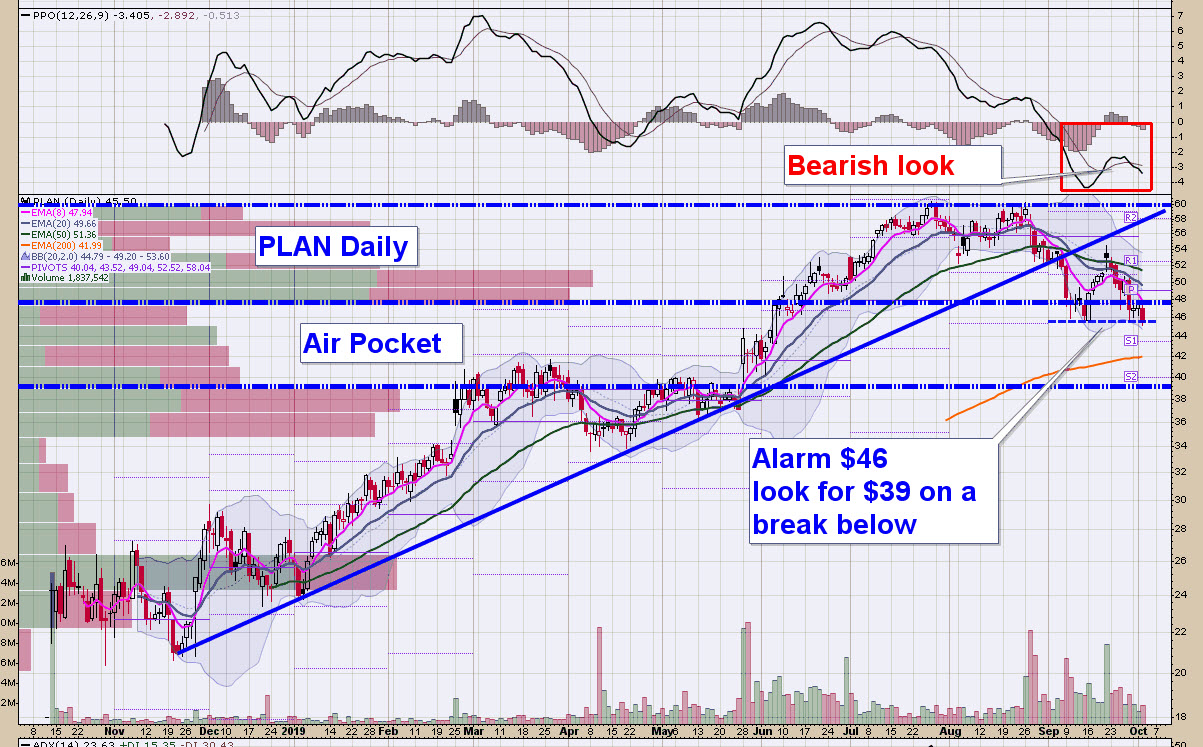 SMH – Stay short if you are in it. THe gaps are still there; stubborn but falling now. I think those gaps get filled.

PD another broken IPO. On the emerging breakdown thru box support I opened PD NOV 25P at $2.05 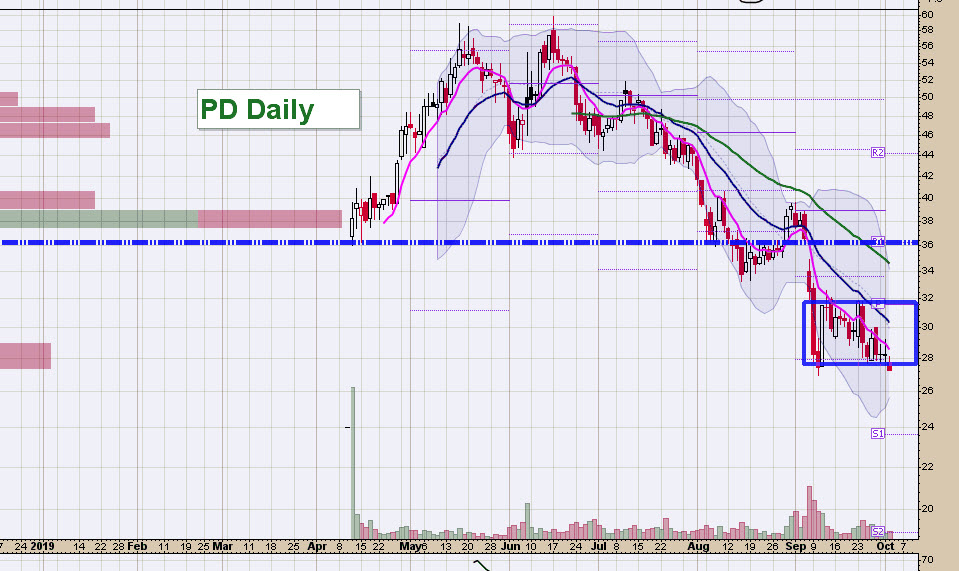 DIS – Topping structure and big gap below. Prices below the 200ema open the door to a possible gap fill.  Earnings in 4 weeks

XHB- this ETF holds $HD $LOW and a basket of other homebuilders. Rolling out of a divergent high. A break of the rising wedge triggers a sell. I have $42 alarmed.    ETF has no single stock ER risk so can be held thru ER season. 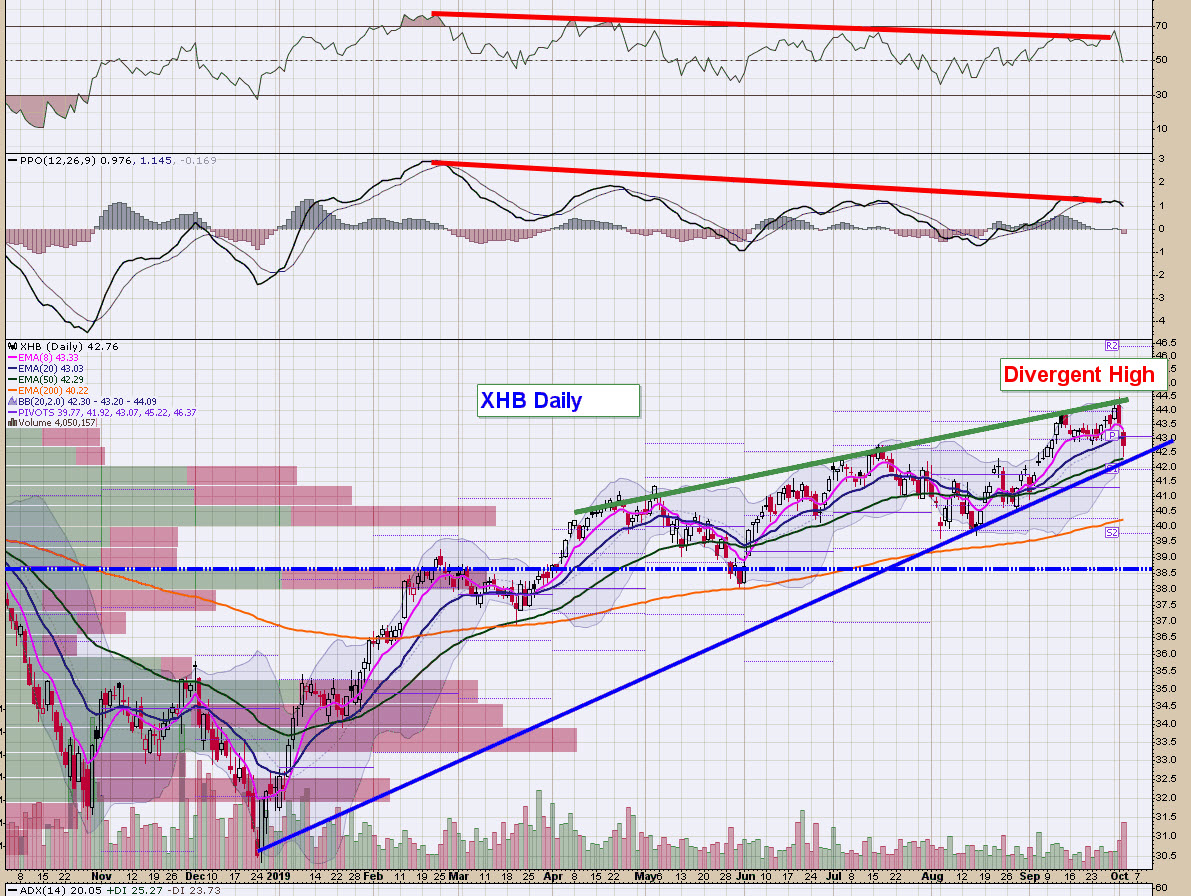 These metals trades are toast 🙁