The Daily Profit Compass provides the stock market analysis for the day. Key levels and trading locations for the indexes are provided, along with trading plans and timely commentary to keep you on the right side of the trade.

Sounds a lot like Peter Brandt never taking a losing position home on a Friday.  Also, key on Tudor Jones emphasis on staying relaxed. A stressed out trader is one prone to mistakes and burn out. Work hard on techniques to calm your mind and body throughout the day. 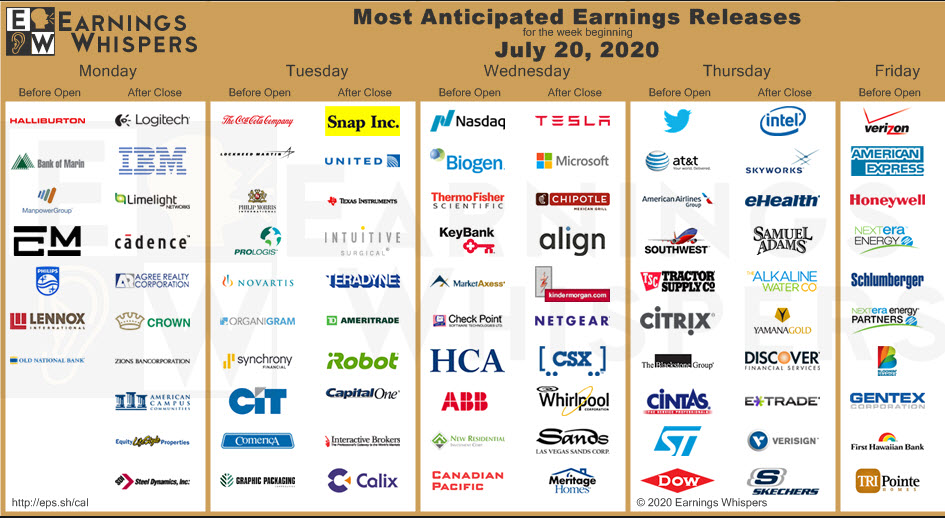 CEO Outlook – The Fog of War

Cam Hui of “Humble Student of the Markets” put together a nice summary of CEO commentary.

The main theme of earnings calls is uncertainty.

As an example, CNBC reported that JPMorgan Chase CEO Jamie Dimon remarked that the outlook depends mainly on the course of the pandemic. “The word unprecedented is rarely used properly,” Dimon said this week after JPMorgan reported second-quarter earnings. “This time, it’s being used properly. It’s unprecedented what’s going on around the world, and obviously Covid itself is a main attribute.”

The economy would be in shambles without the safety net of the CARES Act.

That’s because the $2.2 trillion CARES Act injected billions of dollars into households and businesses, masking the impact of widespread closures. As key components of that law begin to phase out, the true pain may begin. As many as 25.6 million Americans will lose enhanced unemployment benefits by the end of July, and it’s unclear if Congress will extend the $600 per week in additional payments that has buoyed so many households.

“In a normal recession unemployment goes up, delinquencies go up, charge-offs go up, home prices go down; none of that’s true here,” Dimon said. “Savings are up, incomes are up, home prices are up. So you will see the effect of this recession; you’re just not going to see it right away because of all the stimulus.”  The bank has provided forbearance on 1.7 million accounts; so far, more than half of credit card and mortgage customers in the programs have made at least one monthly payment. But these vulnerable customers could stop paying altogether as their federal benefits lapse.

The New York Times summarized the views of other CEOs. All had similar cautious outlooks.

As has been well publicized, Covid benefits begin to roll off in just a couple of weeks. Congress has a short window of opportunity to put together Covid 4 relief package before the schedules August recess and the political conventions.  Most have the package at $1.5T – 1.75T but some sat $3T at the high end. This is for sure. This is the last shot before the election.

My base case is that they pass a bill at the low end of the range. $1.5T ish.  Why?  Because it is in both parties interest to do so. Neither side wants to be the reason the economy tanks. THis is also true….we might get a real scare / dip in the markets as the politicians use brinkmanship and play hardball. If that happens, I’d be inclined to buy the dip.  They will get a deal done because they have to. However If they do not act , we should expect a GIANT RED BAR.  Fiscal and monetary stimulus is keeping the market and the economy afloat. Without it bad things begin to happen more quickly.

The Bulls, primarily led by FAAMG and tech, took charge to ramp markets higher and for SPY through an important technical level at $323.  QQQ has new highs in sight and SPY is gunning for a run to $329. IWM lagged as the back-to-normal trade faded. Cyclical bell weathers airlines, hotels, banks, cruise ships were destroyed.  While as good as this looks, yesterday’s gains came on negative breadth and with only 3 of the SPDR sectors green.   The SPX equal weight was also down.   Troubling yes. Cautionary yes. Sell signals, NO.   We are going to lean on price for our signals. If a level breaks, we can talk about selling or shorting, but until we get visual evidence in price that there is a problem, I want to stay long and ride the bubble if that is what it is.  Keep your eyes open; your head on a swivel, and stops / exposure within reason.  A giant red bar is out there, but until it shows up, we can make Money.

Benefit of doubt remains with Bulls.

Click on the Links to view my annotated live charts

$NEE – Most took profits yesterday, but if you are still in, be sure to exit prior to earnings Friday.

$YETI – Bought the Aug 45 Calls, looking for a pre-earnings run. Closing position ahead of earnings on Aug 6 no matter what.

$PZZA – We are $10 to the good on out $85 entry and just shy of the technical target at $95. Roll higher and protect / raise stops.  Earnings date not posted yet.

$NFLX – Bracket trade with price still inside. No trigger no trade. Watching

$CHGG – Still like it long above $77 breaking to new highs. 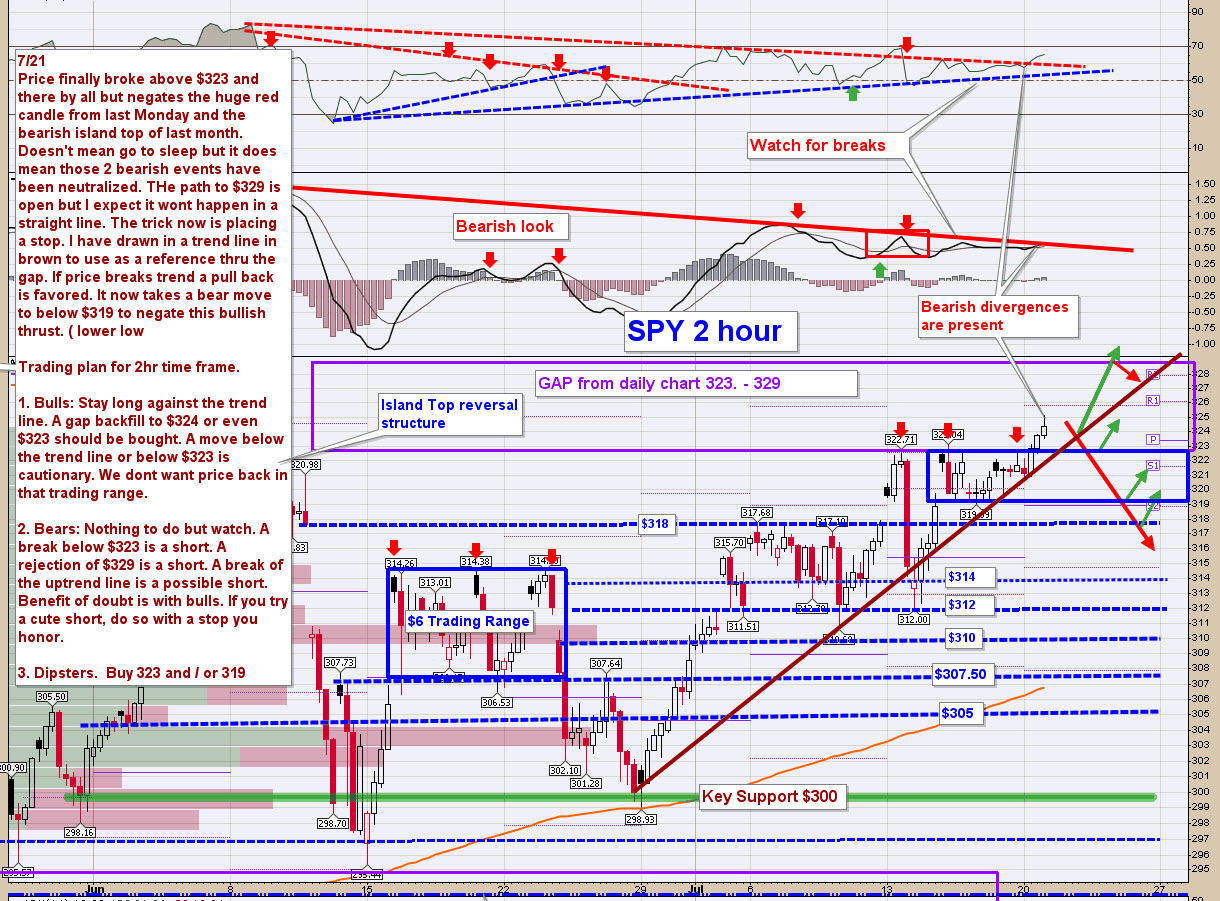 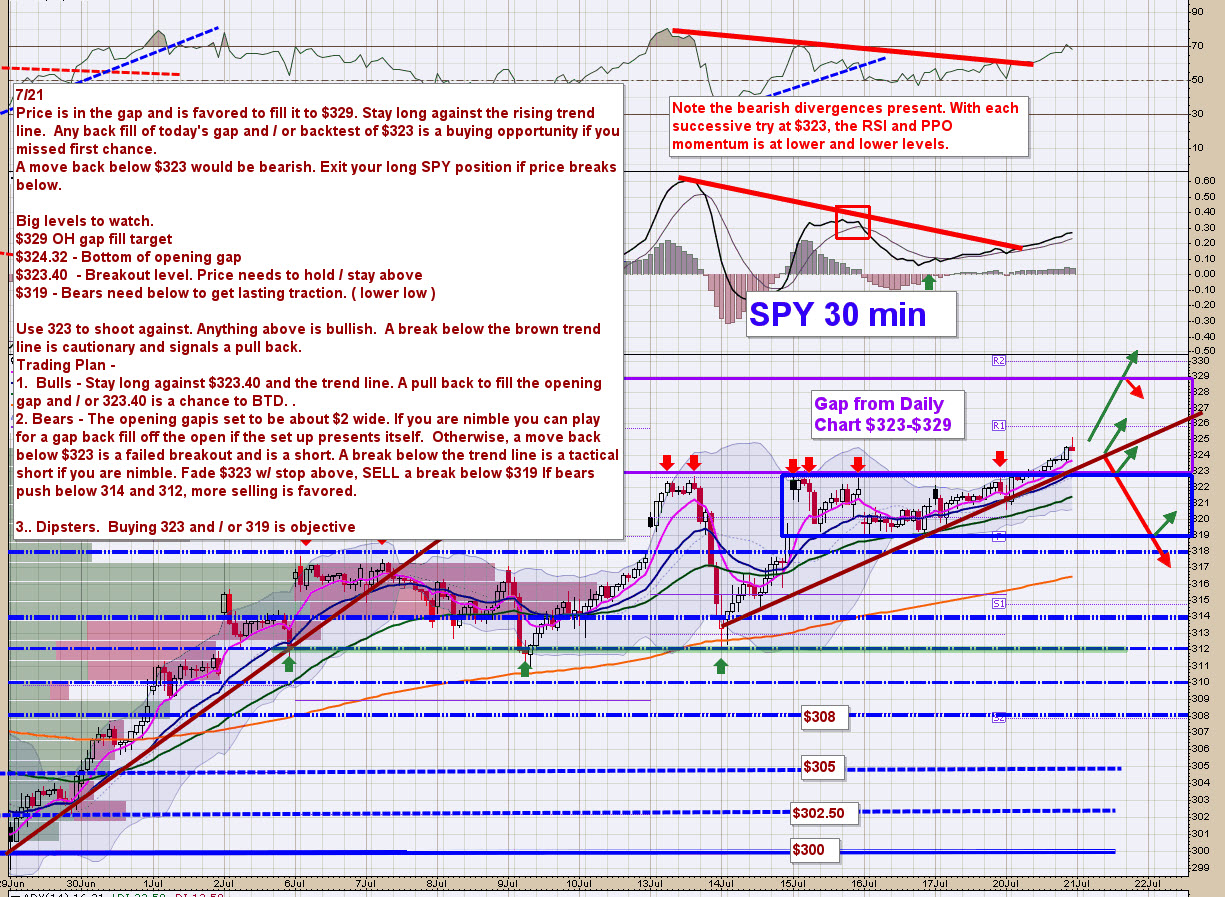 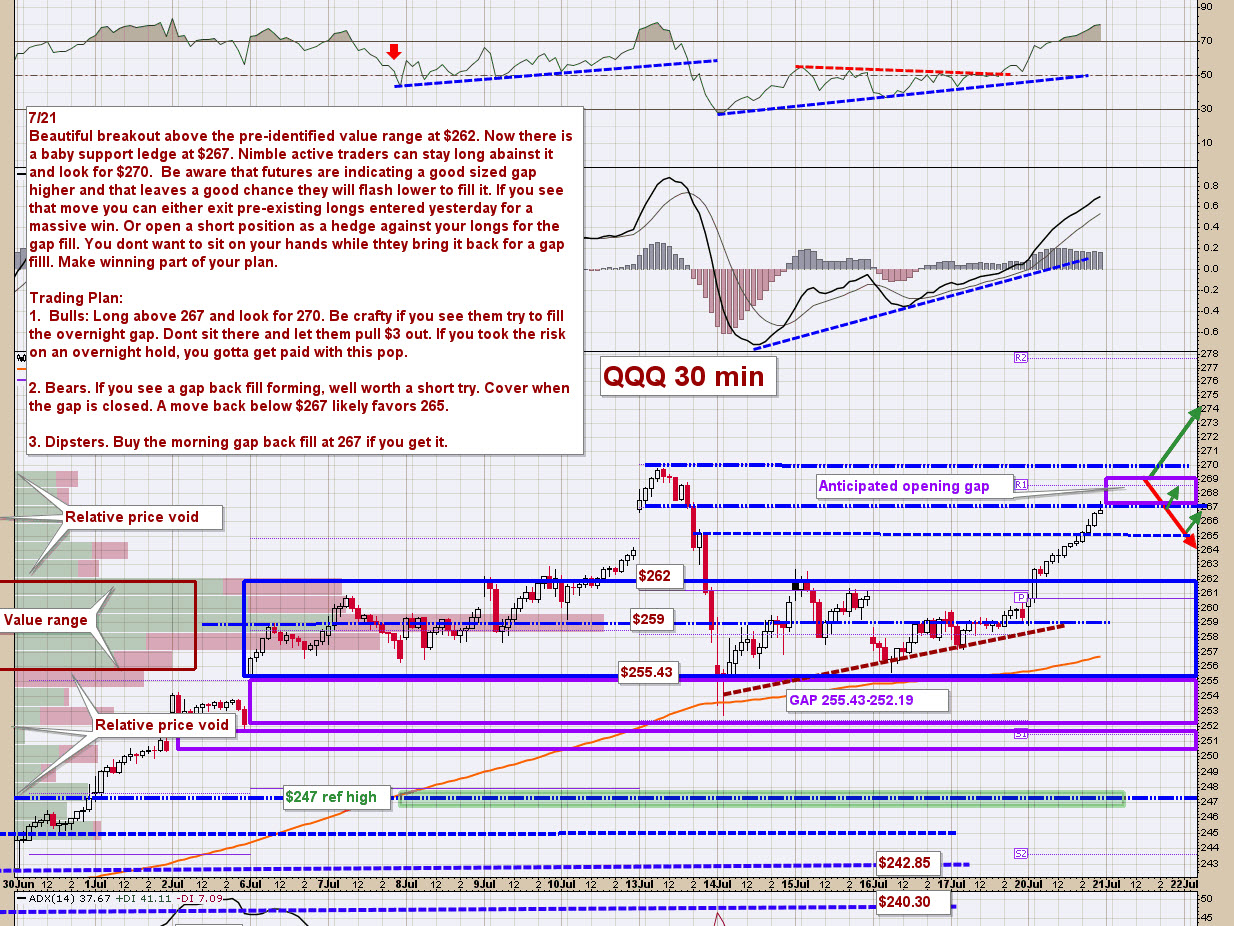 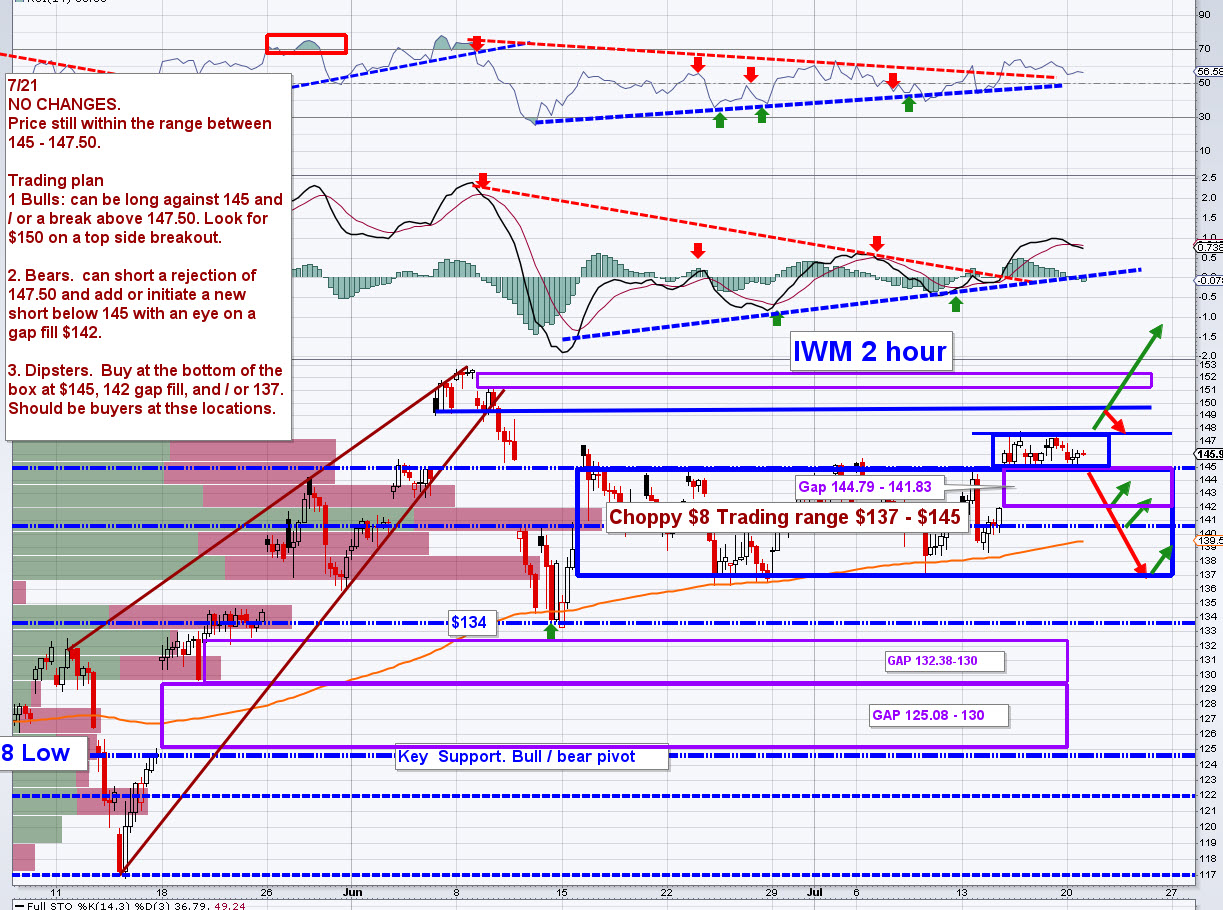 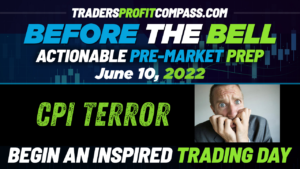 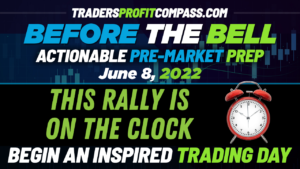 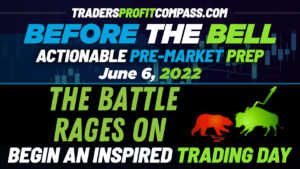 Before the Bell June 6