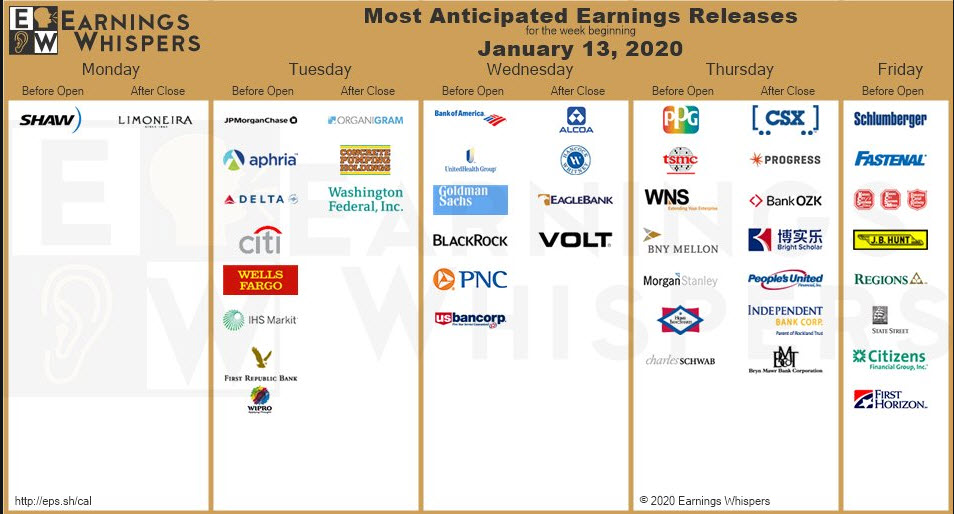 So after 2 years of fake tweets, false starts, rips n dips, the US and China finally sign the Phase 1 trade deal. It’s progress and it checks off another item on the Event Horizon that could potentially mark at least a short-term market top.  Yesterday saw choppy and sloppy price action both before and after the deal was signed where our sell-signal trip wire levels on SPY and QQQ were tested a couple times. Futures now suggest all that is behind us. We’ll need to see how trading goes when the big boys step on the field at 9.30am to confirm that.  Interesting that yesterday that Utilities led and both gold and treasuries posted decent advances. Very much a defensively led market. Additionally offensive sectors like Semi’s and financials were weak.  Next up on the Event Horizon is January Options expiration tomorrow. As we’ve discussed Op-ex often acts as market pivot points so we will see if next week brings any change of tone to the market.

Remain vigilant.  The recent vol expansion is a sign things are changing. Liquidation and overnight risk remains elevated. The trap door can open at anytime for no reason.  Take risk down to a level you’re comfortable knowing that if another overnight episode occurs, no lasting, catastrophic damage will happen to either your account or your trading psychology.   If you’ve been waiting for a market top, remain patient and wait for a sell signal confirmation. If you’ve been front running the sell signal, you’ve been losing. Trade small if at all. Bulls remain in control.

Consider raising stops to $324.  Below $324 and a sell-signal on the daily would be triggered.  Below that level price will face a series of support tests starting at the rising 20ema at $322 and going lower from there. You are certainly welcome to hold through any corrective period but I dont think there is a reason to do that. You can buy back positions at lower levels after the corrective action is over. 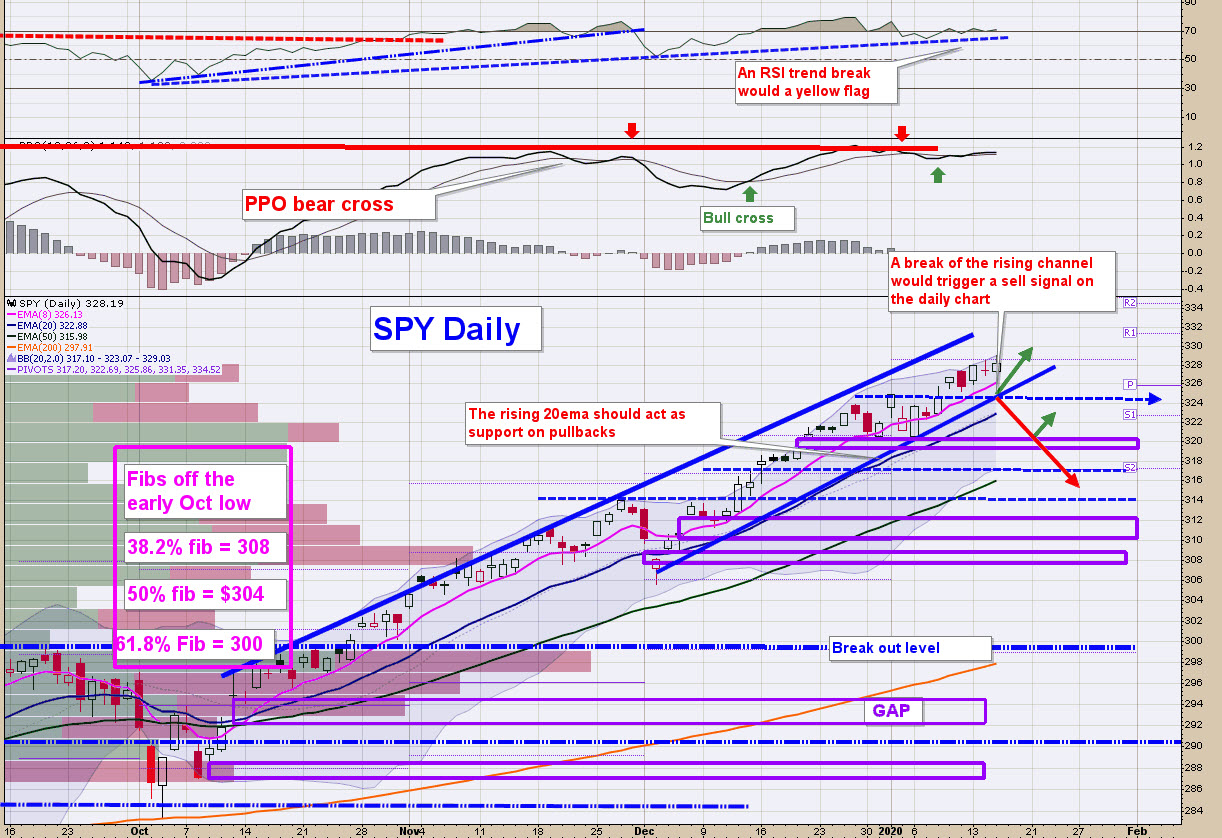 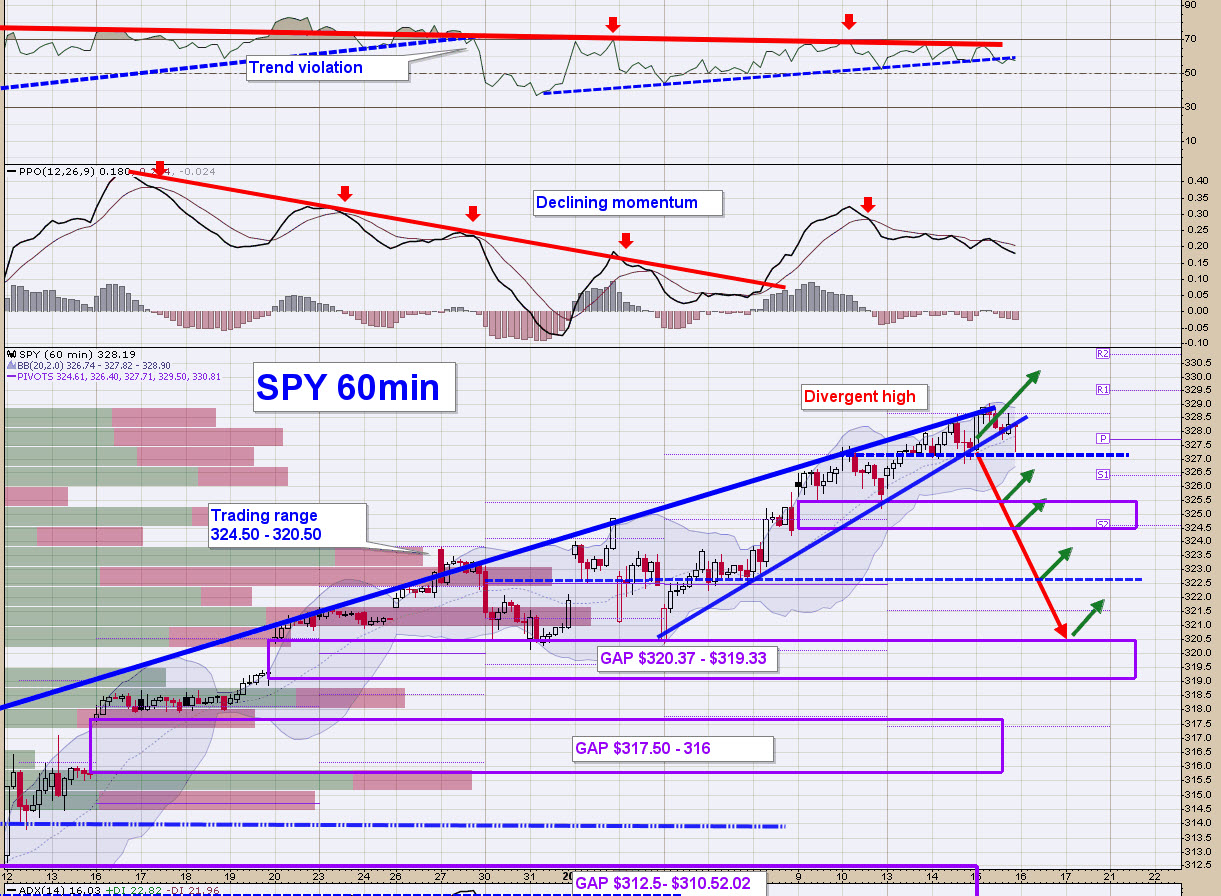 Swing Traders  Although a sell signal would be initiated on the 60m chart at $219.70, on the daily chart, the bottom of the rising trend channel is most important for those trading the daily timeframe. That level is currently $216. This also aligns well with a 20ema test. Swing traders should consider raising stops to $215.50 if you’ve been long from lower levels. 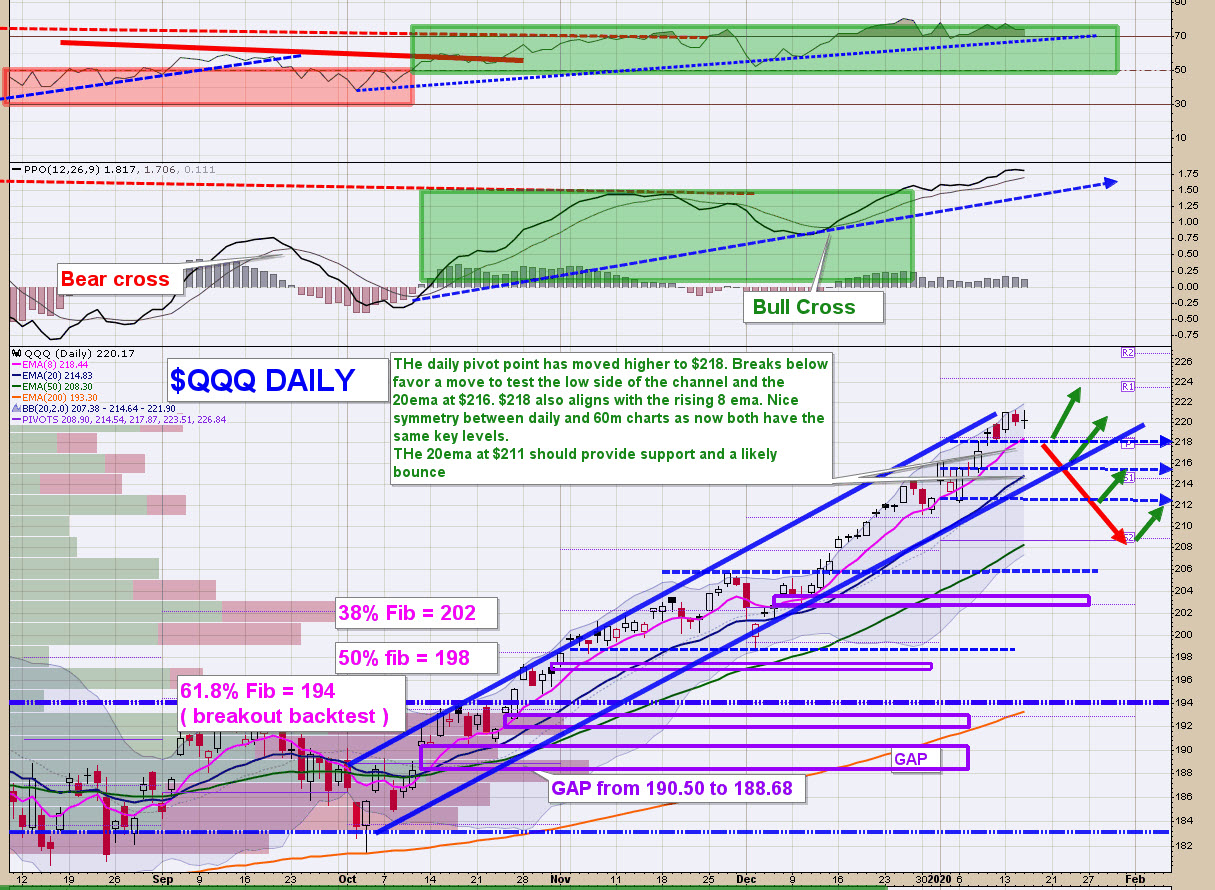 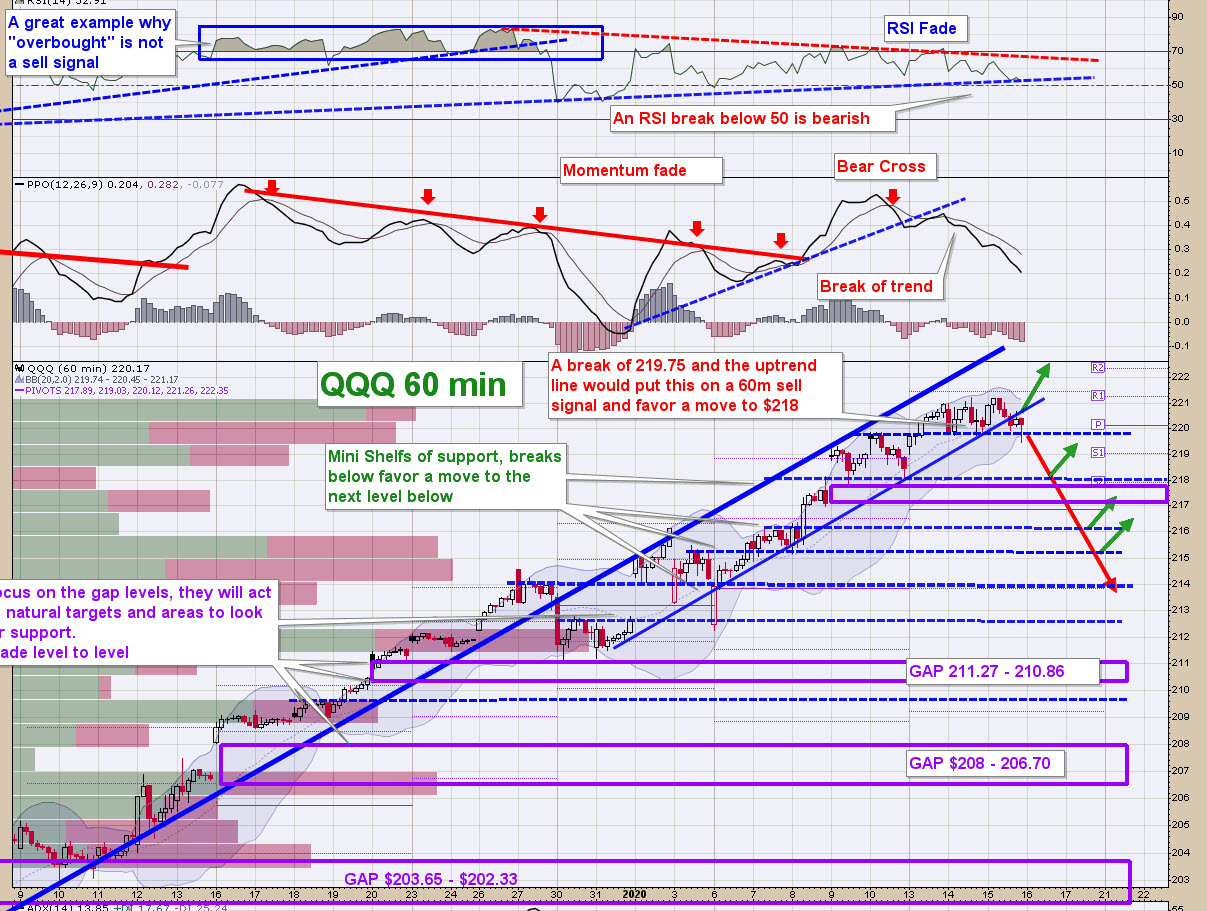 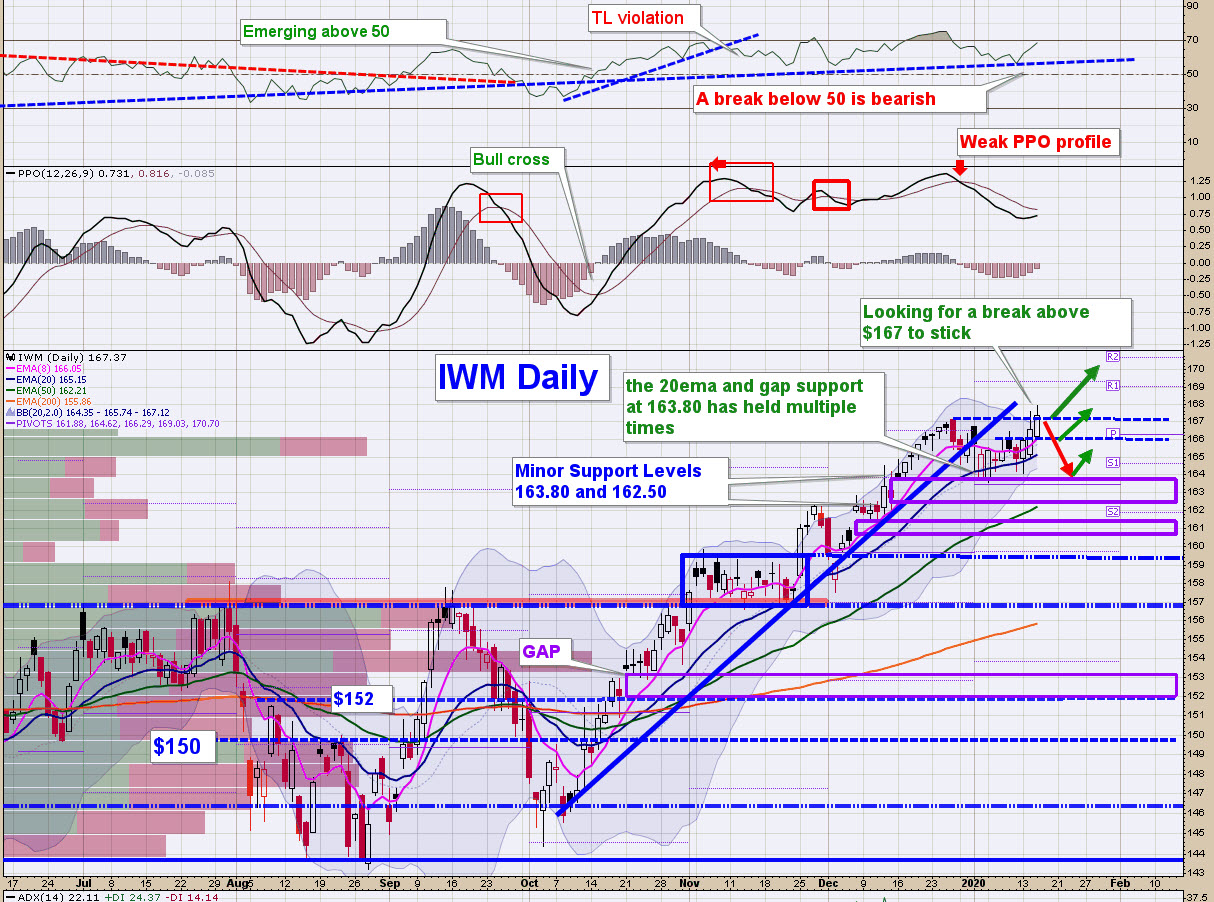 Bear Set up: No clear set up to short other than a break of $163.80 into an unfilled gap. Price action between $164 and $167 has been very choppy and would likely prove frustrating.  If however both SPY and QQQ break down below their key support levels, then knock yourself out with an IWM short. 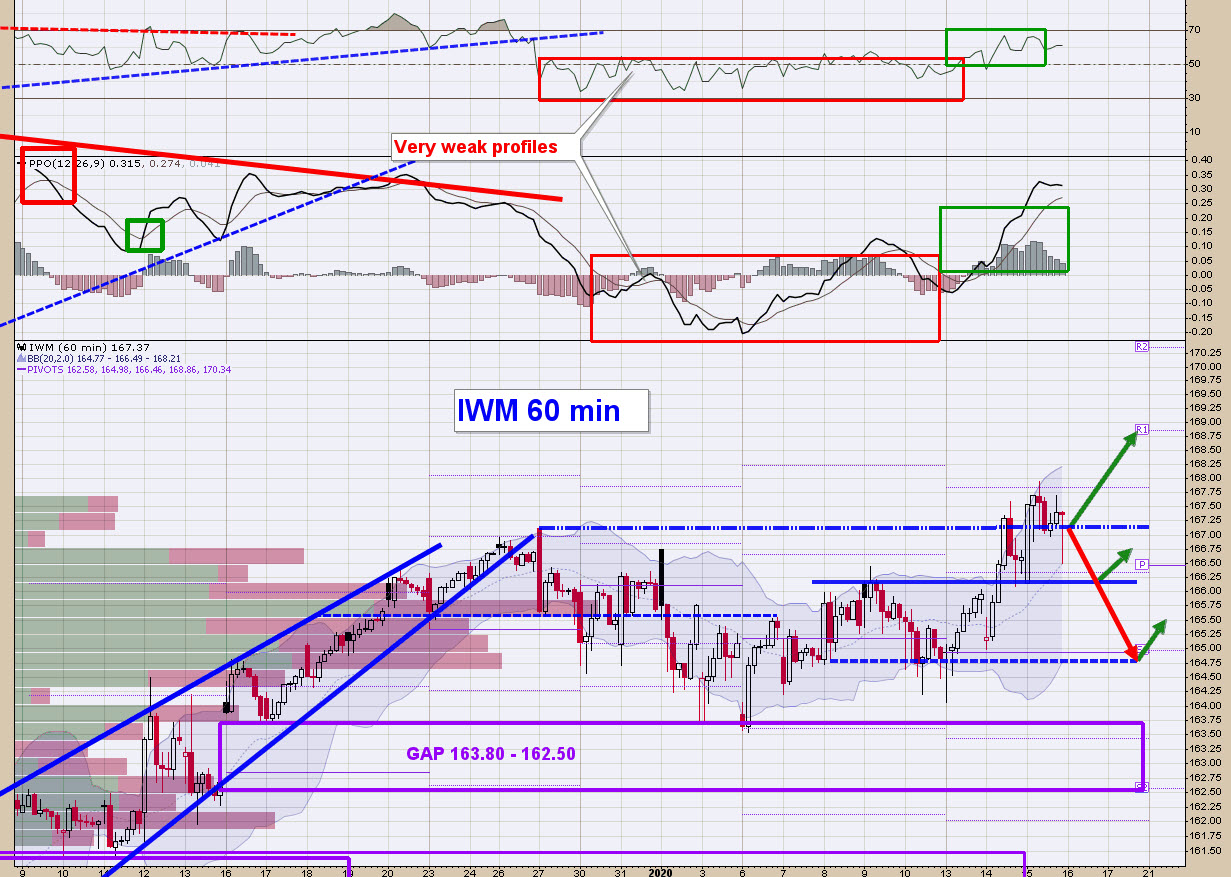 These were highlighted the other day with levels to alarm. Both broke out yesterday and have similar looks.  XHB contains $HD and $LOW while $ITB is strictly home builders.  I like both long against the breakout.  Just a personal preference which one you like. No need to do both. 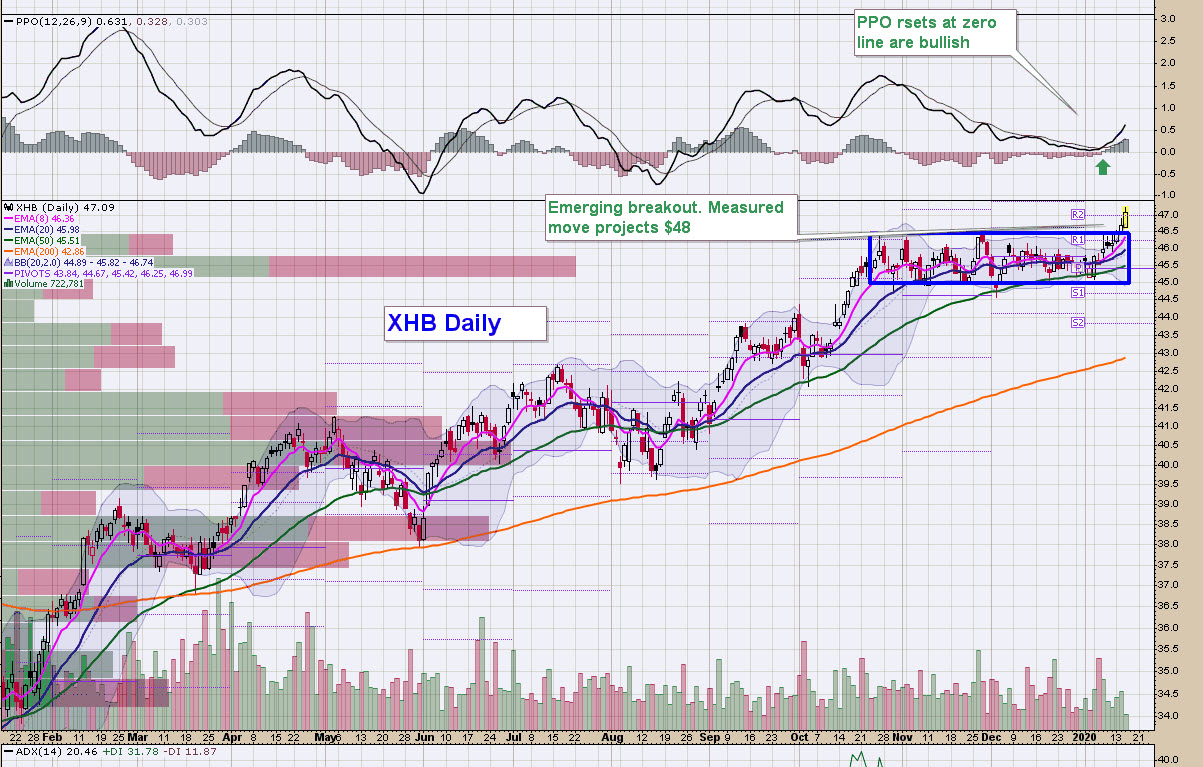 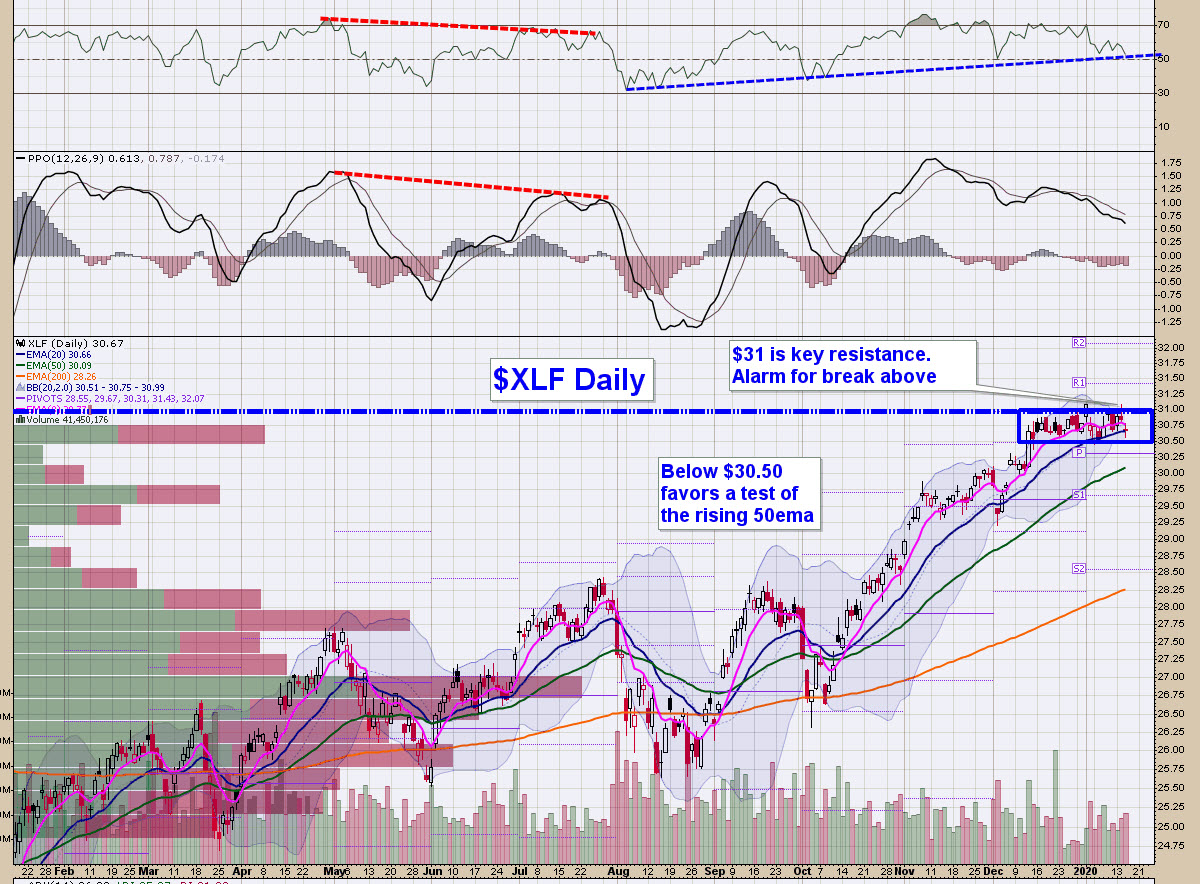 Semi’s have hit a soft patch.  $WDC’s gap down yesterday caught my eye. If you look at the chart several things stand out. RSI dropping from overbought; PPO bear cross initiated at a very high level; Price is at the high end of its range; and there was a gap down in price following a doji candle at the top of a long run.  Set an alarm at $66. On a break below, take it short and look for $63 as a first target. Below $63, here comes $58 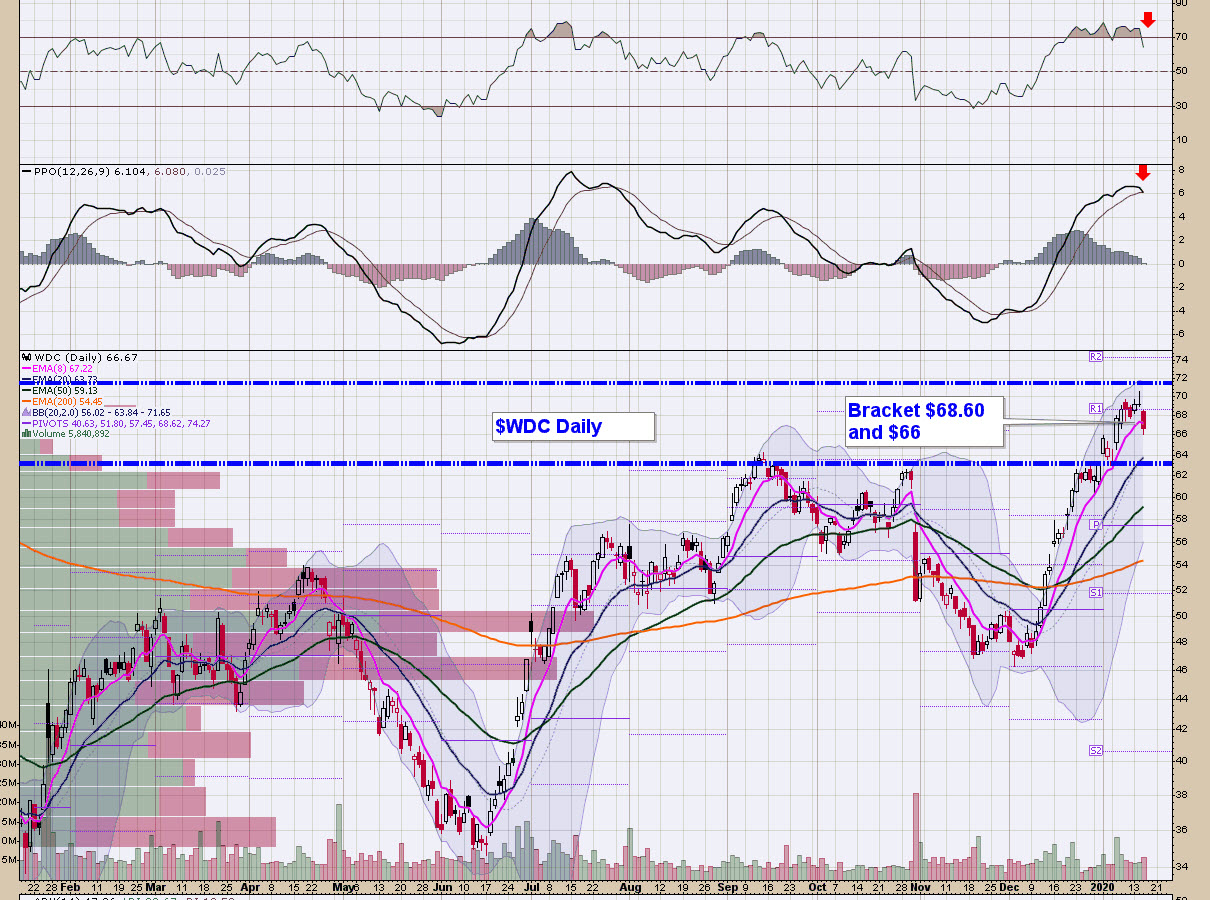