The post provides key levels to watch and trading locations for the indexes along with a multi asset review. Timely commentary to keep you on the right side of the trade

At 86 pages in length, trade negotiation experts characterize this as a memo compared to a typical trade deal.  Have you heard about the “classified annex”?  That’s the list of products China promises to buy, but you won’t be allowed to see. I am not going to spend much time on this. My opinions don’t count for much in Washington. My main concern, like with all news flow, it to watch and react to the subsequent price action.  The signing of the deal could just as easily be a “sell the news” event, as a “buy the news” event.  The key levels are below. By watching levels instead of listening to commentary, we’ll have a much better chance of getting the trade right if there is a trade to make at all.

60min sell signals will trigger at the following levels

In recent editions of the Daily Profit Compass I’ve discussed the bubble we find ourselves operating in and what protocols we can take to both participate in the upside while protecting ourselves from catastrophic downside risk.  Find the discussion HERE

Price is up against downtrend resistance. A breakout here would foil many a pundit’s call for a weakening $USD in 2020. In the annotations you can see a rising Dollar’s impact on various asset classes. Obviously a falling Dollar would be bullish those asset classes. So back to the chart. A break below $26.05 and especially the 200ema at 25.93 put the Dollar on a solid sell signal. A breakout above 26.30 put plans for a weaker Dollar on hold. Above 26.6 and the Dollar breaks out to new relative highs

Over the past 4-5 months, oil has seen 2 spikes due to geo-political events. Both moves were aggressively faded. Fundamentally, oil is in an over supply condition as global demand remains relatively weak. Now, from the chart, price couldn’t be at a more critical spot at the intersection between uptrend support and the 200ema. If oil breaks below price could fall as far as the low $50’s although not in a straight line.  Good trading proxies are $XOP, $USO, $XES, $OIH  and of course individual oil names. 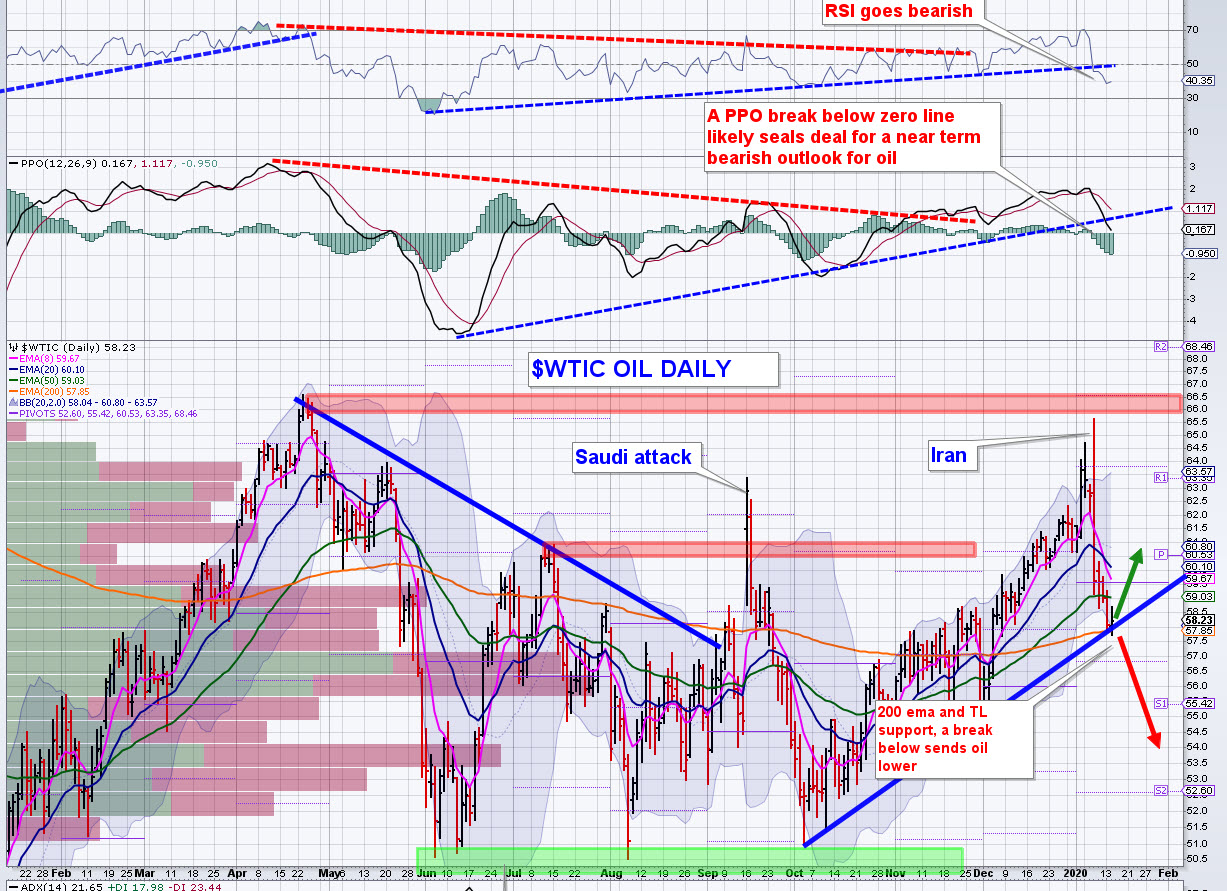 After an impulsive breakout from the long consolidation, gold peaked on Iran fears. That move was faded and now gold is again consolidating. I’d love to see a 20ema test before getting in again.  I think gold is in an emerging bull market. That said, it is known as a widow-maker and heartbreaker. Accumulate on pull backs and look farther out in time vs a normal stock. Ride the longer trend instead of trying to game every little move.

For the miners ( $GDX ) they just had a successful 50ema test. A nice place to get long against the 50ema as your stop. Miners are a good trading proxy for gold. They usually outperform the metal. 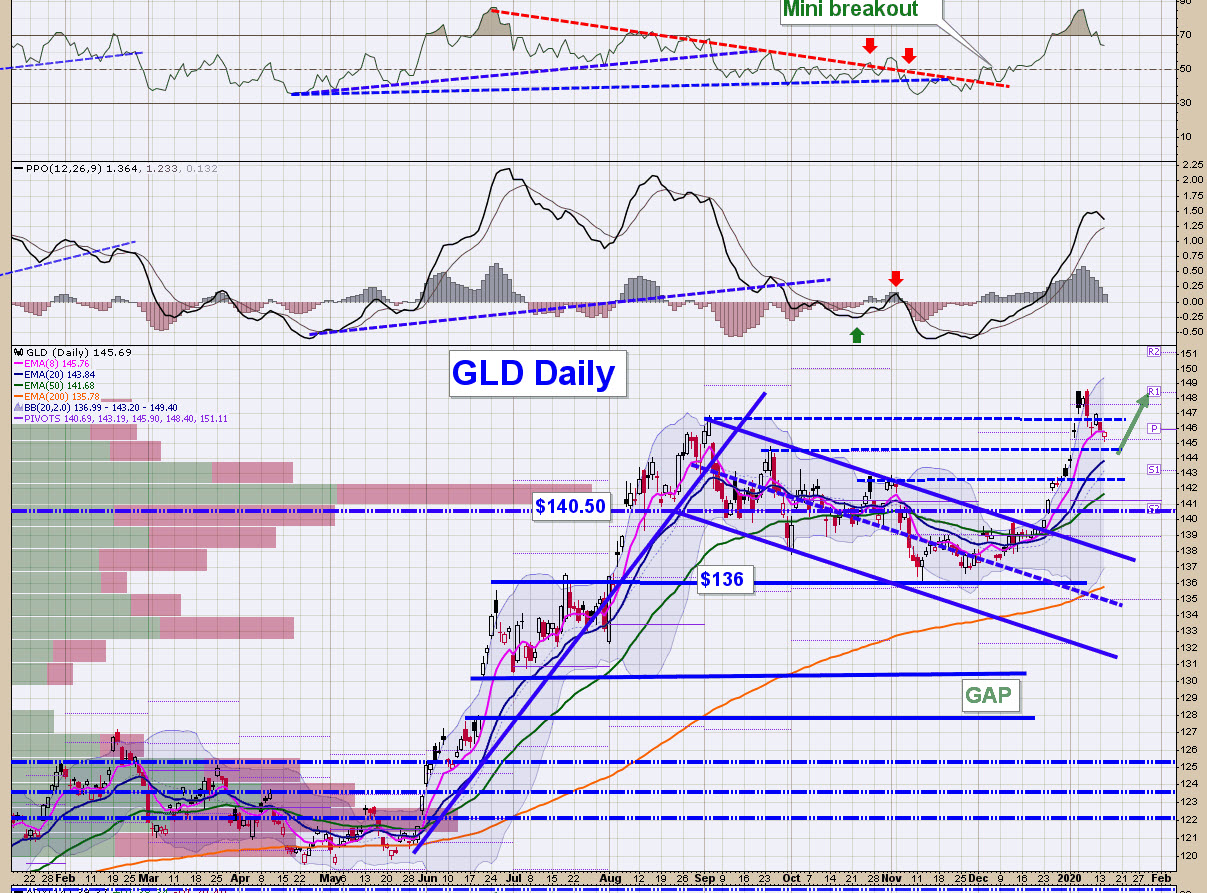 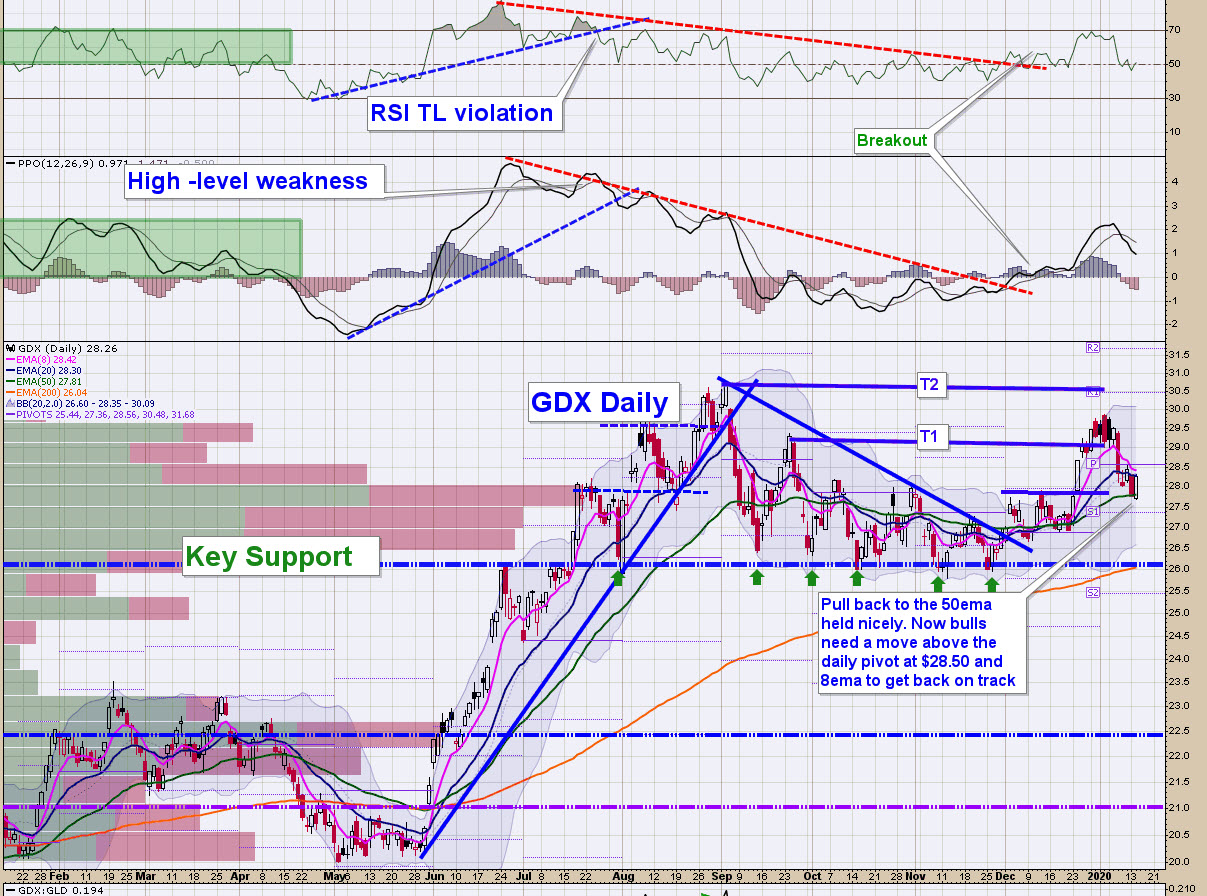 Thus far, Bonds are not really buying into the equity rally as they have either held firm or slightly risen as equities have advanced.  The support and resistance levels on the 60min chart have worked well for tactical trading. Regard $135.50 as key support.  Below this level and prices would favor a further pull back.  Trader’s loaded with equity longs might want to consider tactically building a long position on dips. As long as $135.50 holds, you’ll sleep better at night knowing you have this hedge in place against your longs.

$SHAK – Add Shake Shak to your active watch list. After a hard rug pull, price has put in a saucer bottom and yesterday had a wide-range igniting bar.  The igniting bar tells us something is changing. We saw the same thing in BYND and other beaten down IPO names.  There is a big OH gap to fill and a relatively close stop is available if you want to take a shot long on it

$BSX  The gap down yesterday sets up a bracket trade today. Follow price on a break of yesterday range.

$TGT  –  Down $10 – $15 premarket on holiday sales miss.  Nimble active traders my find a trade here if the premarket move is either faded or bought.  Although I missed it, $FIVE had a similar set up on Monday. Price is up $18 off the opening low Monday morning

While I can’t promise that joining our group will change your life, I’d like to think joining our tribe will help your trading.