The  Daily Profit Compass provides stock market technical analysis for the stock market today and is focused on the indexes and FAAMGs. Key levels and trading locations are provided, along with trading plans and timely commentary to keep you on the right side of the trade. 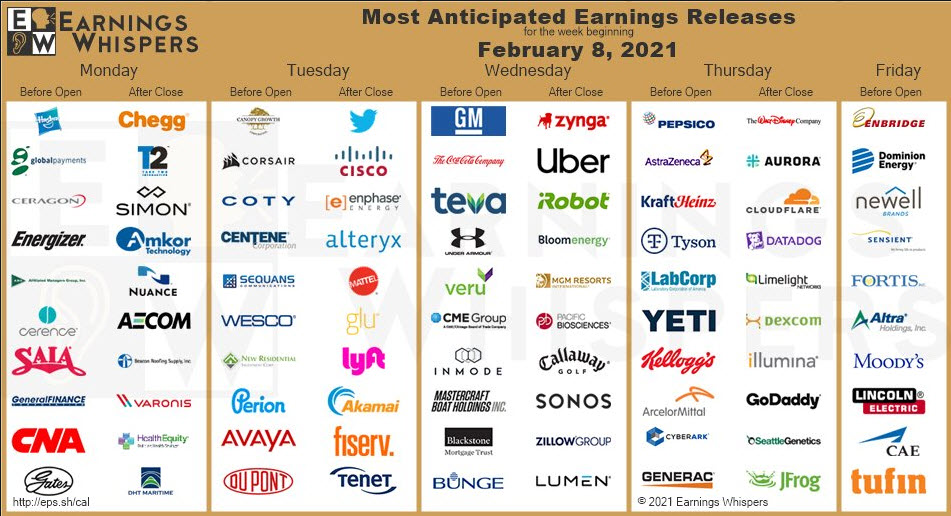 The video is a detailed technical review of the indexes and FATMAAN names.  All the key trading levels are identified along with commentary and trade plans for each ticker. Trade ideas are also discussed. 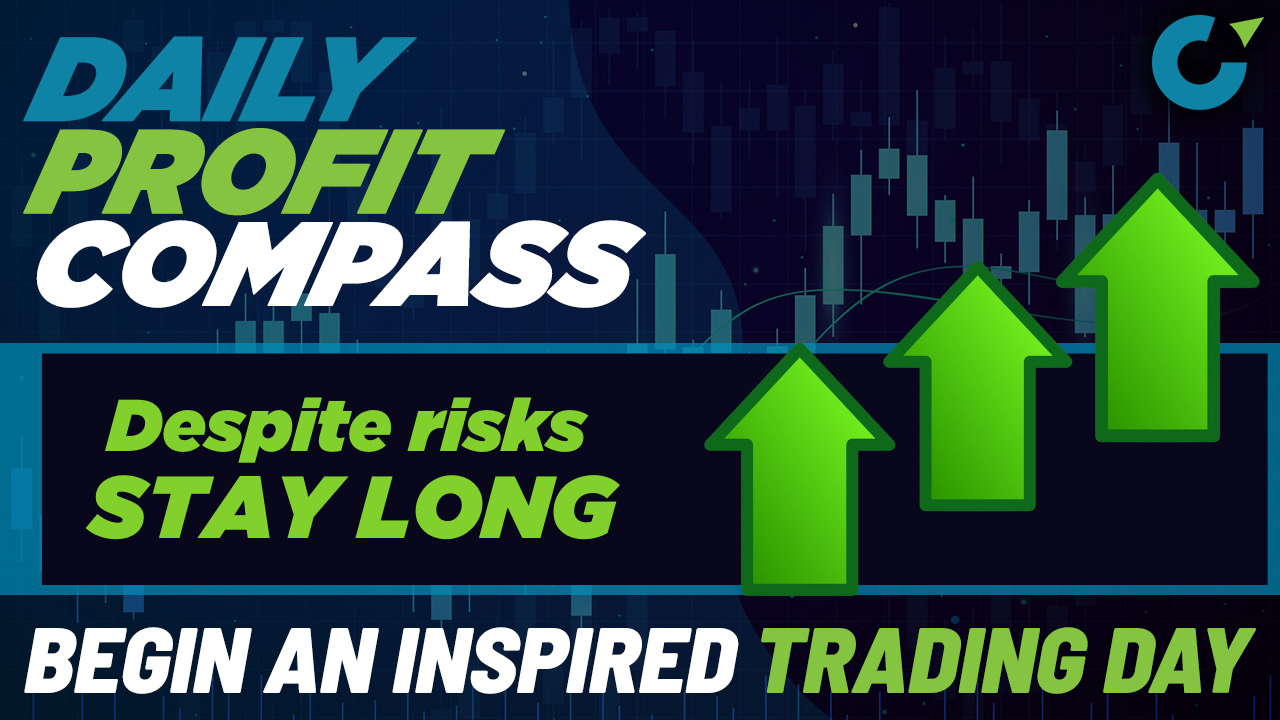 Exploring how Narratives are central to Wall Street

In the most recent “Smarter Markets’ podcast, Dr. Ben Hunt explains the central role narratives have always played on Wall Street. The recent $GME –  /WallStreetBets episode is just the most recent example of how narratives can mislead the masses as to what is really going on.  Dr. Hunt explores how the advent of social media has turbo-charged the phenomenon and has made the consequences that much more dangerous.  I recommend you listen to the 60min program. It’s important to recognize and be able to discern these narratives as they’re being fed to you.

Market Risks  vs.  Flood of Monetary and Fiscal Liquidity

As market participants, you must feel the conflict in your gut. It is uncomfortable.  You watch markets make a round trip from ATH’s to the 50ema back to ATH’s in less than 10 trading sessions. You know that is not typical market behavior.  The markets are finely balanced between unhealthy excesses and excess liquidity.

Wow! What could possibly go wrong?  Two weeks ago we saw a glimpse.  $GME, a piss-ant company that few followed, sent hedge funds, prime brokers, exchanges, and prices into a sharp tail spin. The point here is to simply communicate that it wont take much to tip this thing over and that the unwind will be brutal.

Both the cause and the counterbalance to the current market condition is the record and massive liquidity that is finding its way into the market as evidenced by the fact that stonks only go up.  All global central banks, led by the FOMC, are pumping and now most governments are cranking up the latest fiscal surge of liquidity. Soon we will have the next round of Covid relief spending around $2T and if sources are accurate, that will be followed by a big infrastructure bill.  The Dems don’t need bi-partisan votes, they can do as they wish.  All corners of power will do everything possible to keep all the balls in the air.

From the book When money dies: “Speculation on the stock exchange has spread to all ranks of the population and shares rise like air balloons to limitless heights…… The population was now engaged in evading taxation and devoting their money to speculative purchases…. Shares in respectable concerns which had paid a 20% dividend, were pushed higher and higher till the final holders could not expect a return of even 1%.”     If we’re not already there, we soon will be.

Balancing the conflict and Actionable Activities

As the $GME episode highlighted, when markets break things happen very quickly. Have a game plan together and be ready.

Growing divergence between the $USD and Equities

Until recently, a rising $USD has resulted in a risk-off impulse for both equities and commodities. Only gold has respected the relationship in recent weeks as price has been dwarfed during this up cycle in the Dollar.  The graph from Cam Hui shows the divergence.   Does the Dollar roll over, do equities roll over, or does the divergence grow even larger?

In the companion video, I cover off the FATMAAN names using the daily timeframe. Some very interesting trade locations are on the horizon that will set up well for swing traders on the daily time frame.

A detailed walk-through of the levels and trading strategy for the indexes is given in the video ( link above) . The static charts are provided for reference. The FATMAAN names are also reviewed in the video. 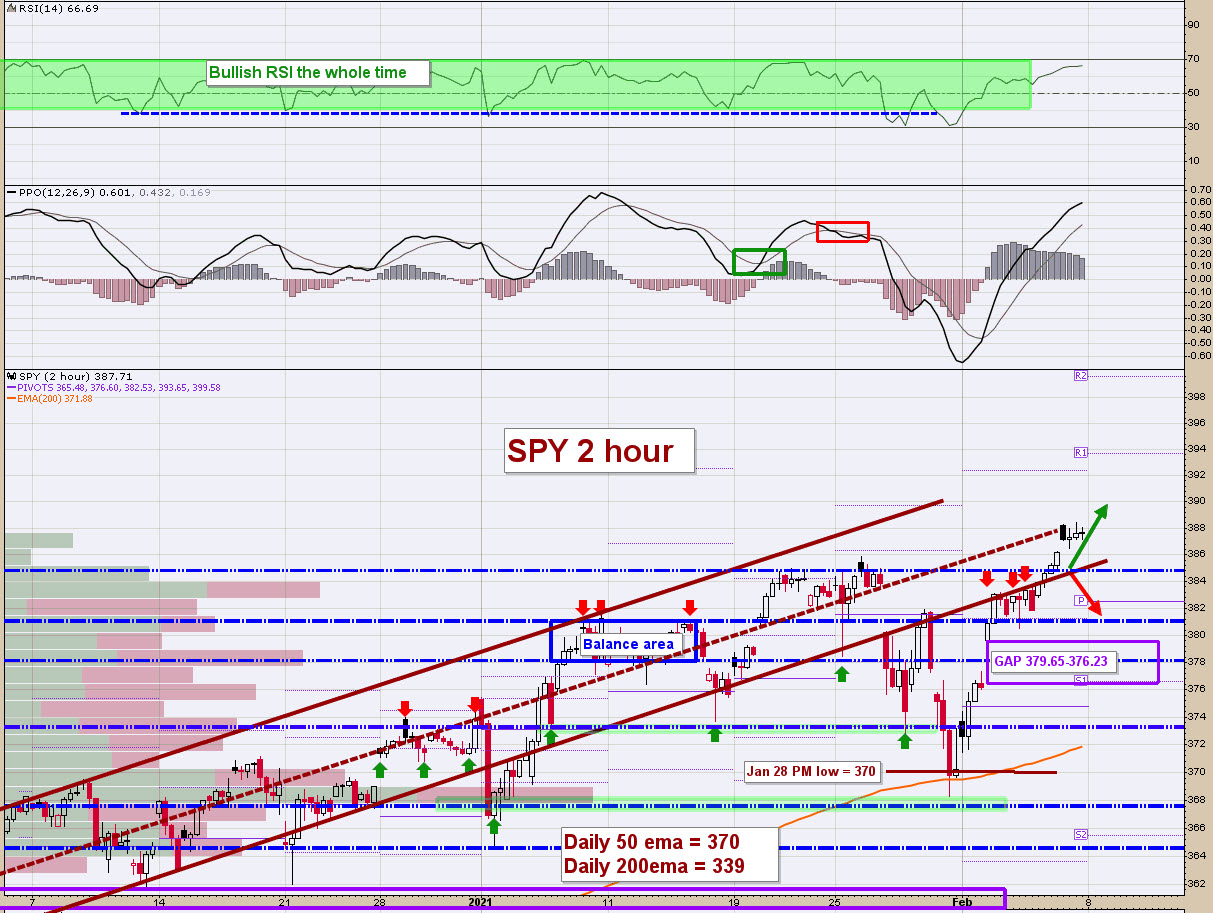 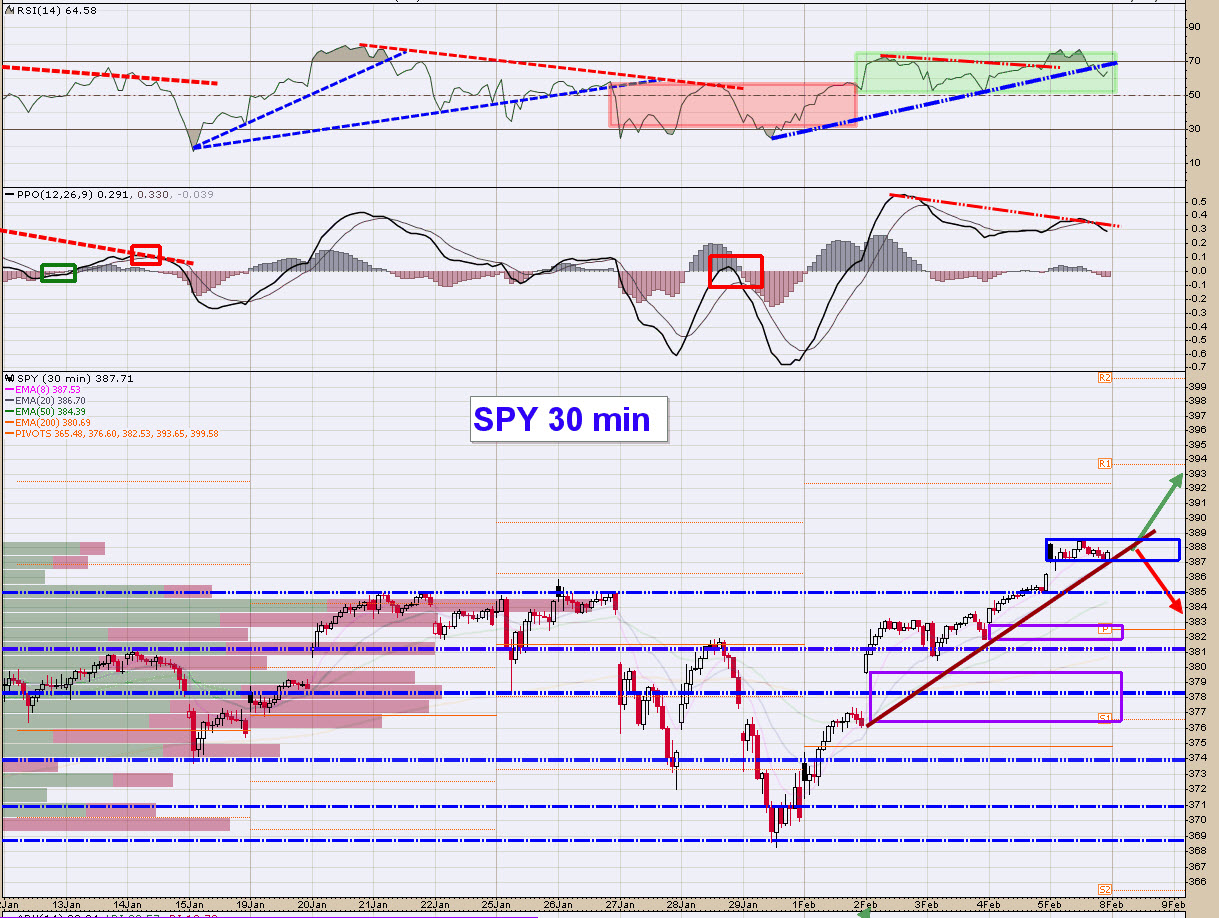 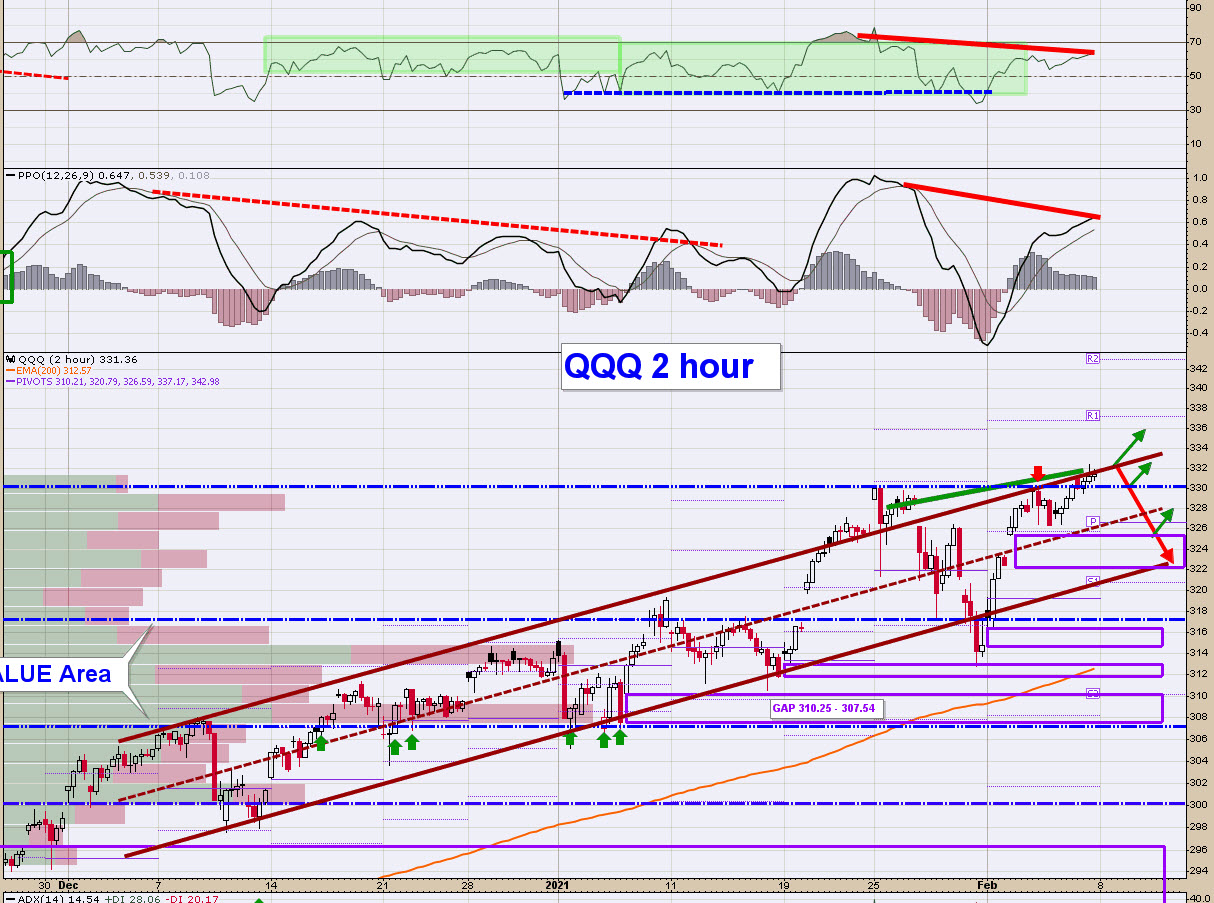 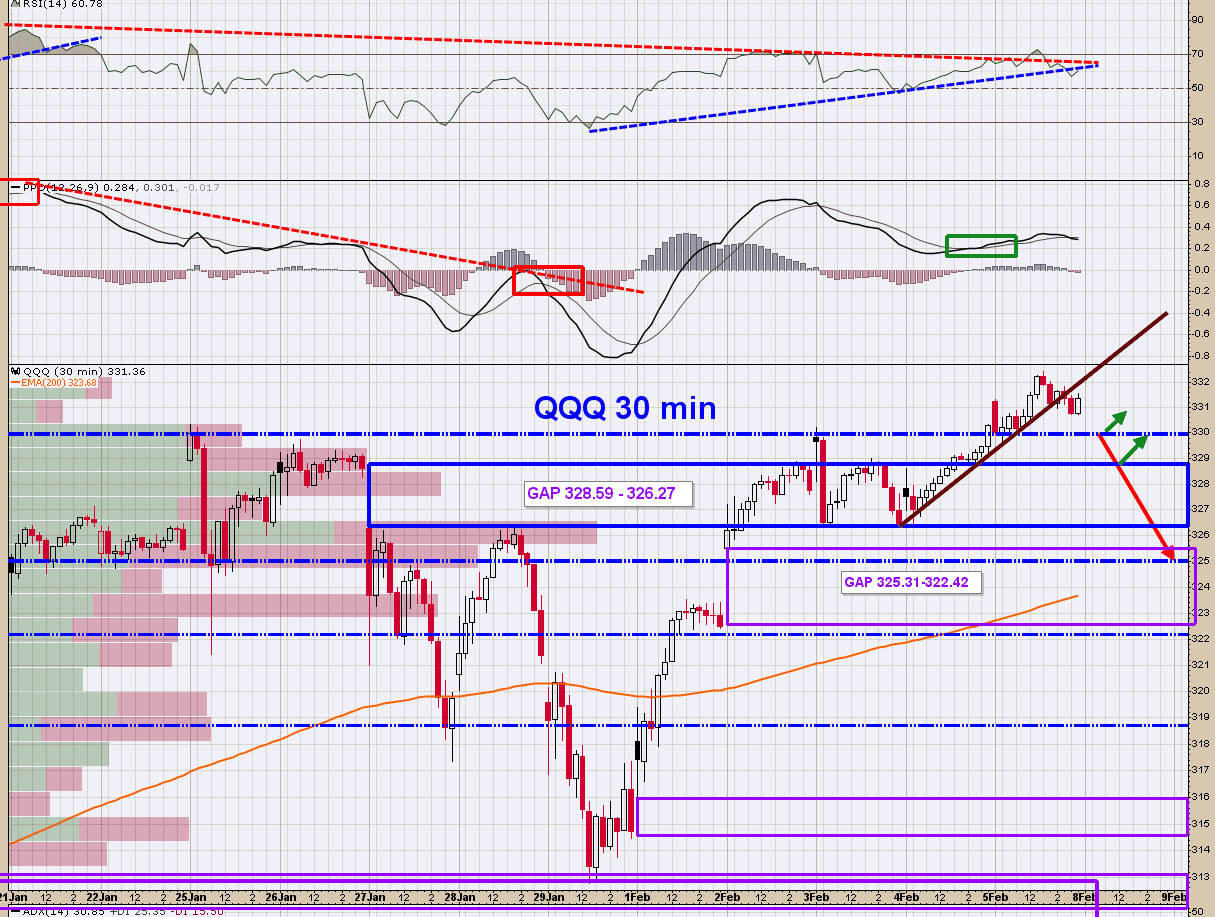 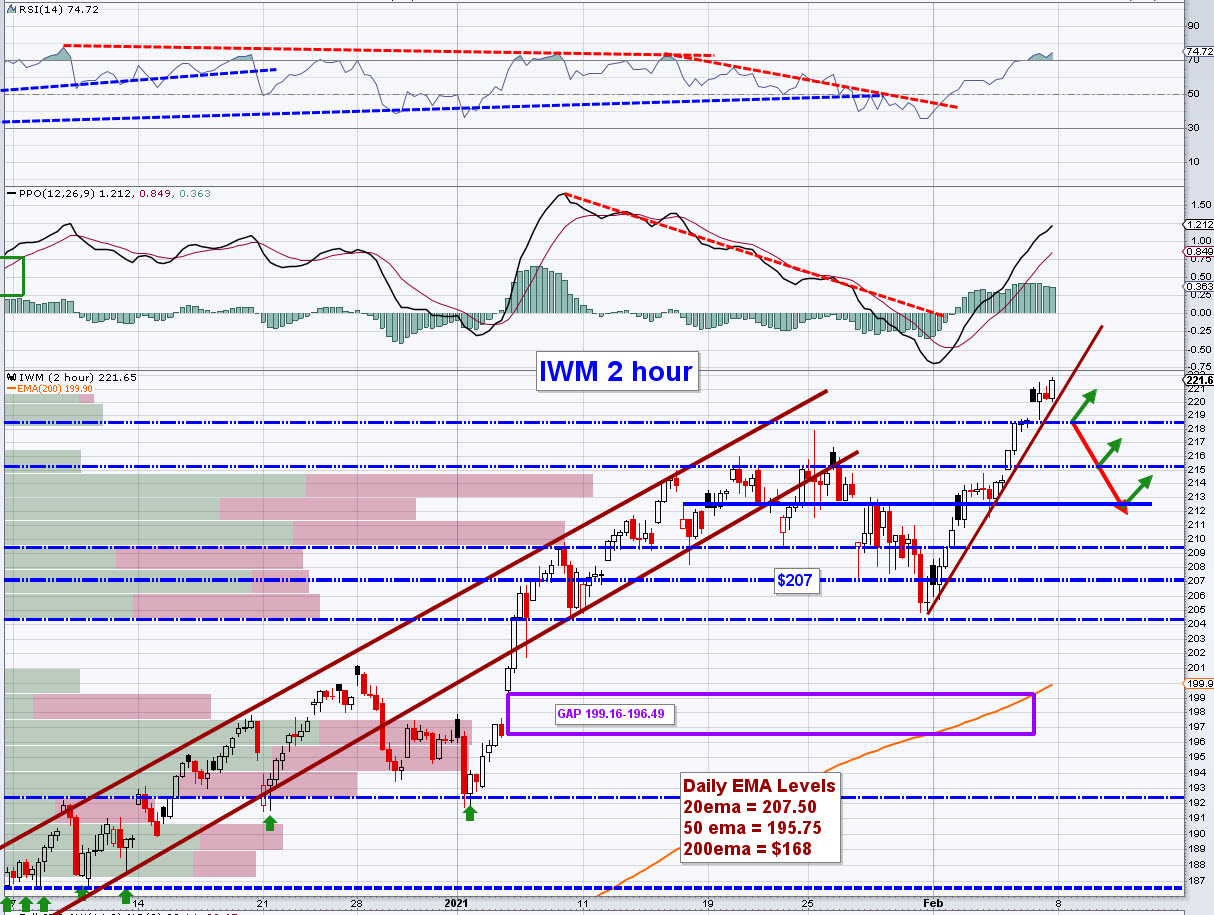 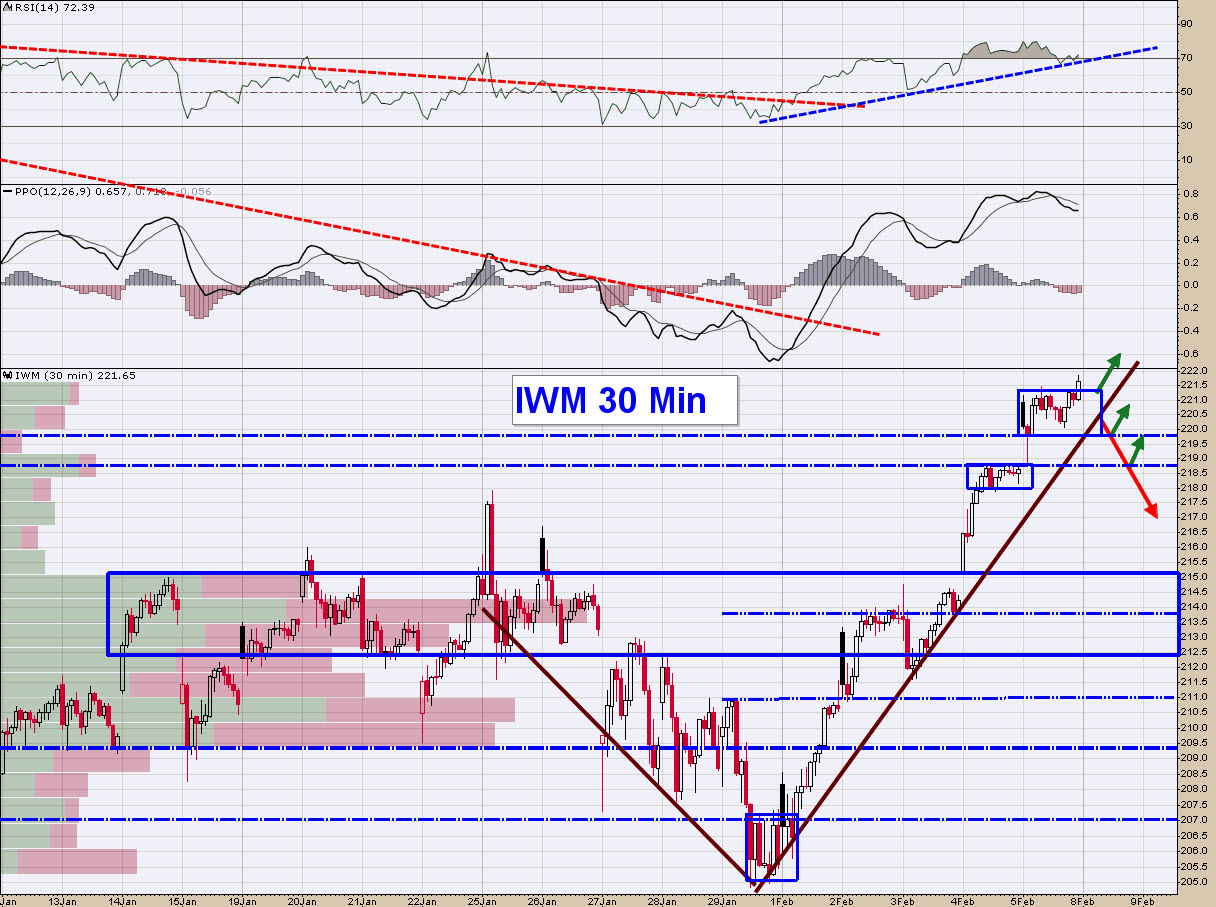