Chances we could snowball

Famed inspirational author Jim Rohm states “You’re the average of the 5 people you spend the most time with”.  I have no reason to doubt him. After all, we’ve heard for years “Birds of a feather flock together” and “You are the company you keep”.  The point is that our community of friends and the social media circles where we hang out greatly influence us.   In 2020, set out to upgrade them. That is not an indictment of anyone’s friends, its just that in order to grow individually we’ve got to upgrade the people we hang out with. It will take some effort. Seek out those that inspire you, that challenge you, that you can learn from,  and that you truly like and admire.  I’ve been asked “What am I supposed to tell my old friends?”  To that I say absolutely nothing.  If you decide to leave behind a trading chat room that you’ve concluded has not helped you, you simply disappear.  No one will come looking for you. For those you’re leaving behind in the “real world” , they’ll just organically drift away. Maintaining relationships takes energy and commitment. Once your energy and commitment wane toward a group or individual, they’ll naturally fade off.  In this whole process, don’t forget that your friendship with someone quite possibly will be an upgrade for THEM.  Don’t underestimate how you  much you can help others!

Chances we could snowball.

I think there is a better than 50/50 chance we see a decent correction, possibly as far as $300 on SPY where I’d think there would be motivated buyers.   I think some market participants will re-position early in January and take some chips off the table. The kicker is that as long as the Fed is committed to expanding it’s balance sheet, it’s likely that the flood of liquidity finds its way to equities. I mean, this whole leg of the rally started when Powell began intervening in the Repo market. If that becomes more or less permanent it bodes well for the market at least into the Spring. As always, I will be watching the charts; they’ll guide us on positioning.To sum it up, tactically looking for a pull back. Strategically looking for a cheaper place to buy.

Strategy Update:  I am becoming more defensive and am tactically positioned for more short-term downside; longer term, there is nothing bearish in the charts. No major levels have been violated.  If you’ve got long positions, simply respect your stops and don’t be married to anything. If we get a decent pull back, you can re-buy at lower levels.  I’d take a pause from piling into new longs until this light volume holiday week plays out. We will know more the week of Jan 6 when everybody is back in the chair and the new year begins in earnest.

Swing Traders.  Swing longs should be prepared to close positions if price enters the gap at $320.50 in anticipation of that gap filling to $319. Depending on your trading style a gap entry at $320.50 would be an objective location to anchor a short.    On your other stock positions, respect whatever stops you have in place. itions, be aware of it. 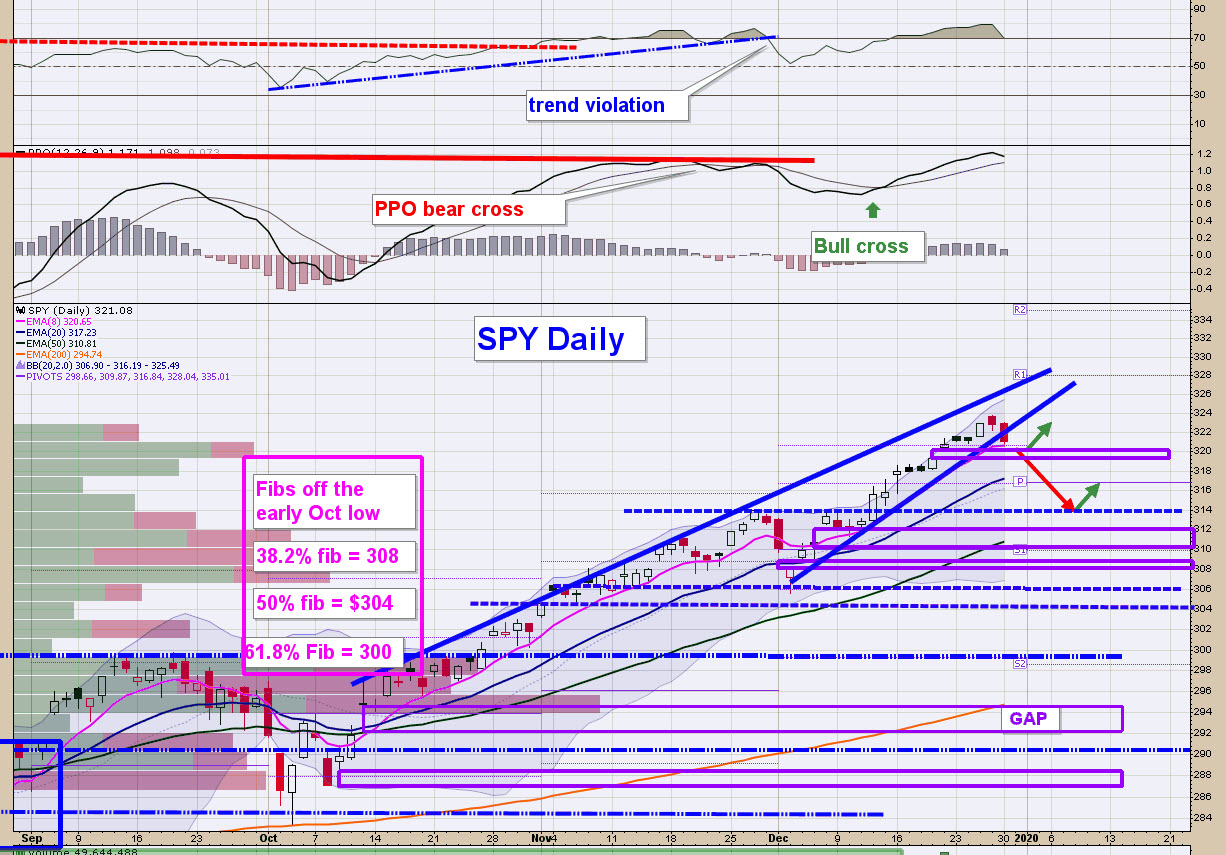 The 60  min chart is on a sell signal.  Moves below $320.37 would likely bring in a few more sellers to close the gap down to $319. Be aware that the light holiday volume makes the averages more susceptible to oversized moves.

Places to look for support are at $320.50, $319, $317.50 to try a long. If you’re looking to buy a dip vs trying to play the downside, I think a better short-term move is to simply let this pull back play out to see where support is established to initiate a fresh long.

Anticipate a move to the bottom of the channel. A break below the channel would favor a deeper pull back.

Swing Traders  Longs should make a tactical shift to anticipate a move to test the bottom of the rising channel at around $210. A break below will bring in new sellers. 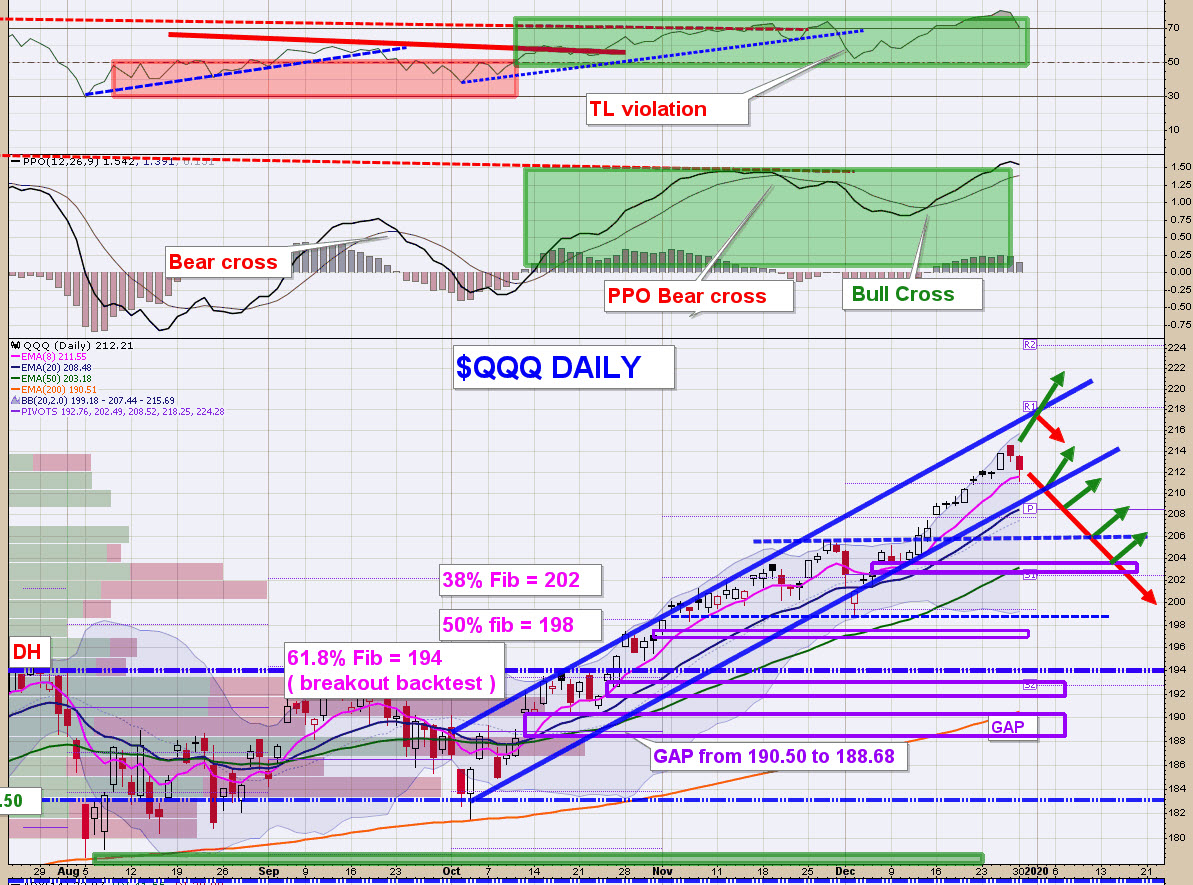 Bull Set up: Tactically step aside and wait for price to find support before taking a stab at a long. I think $209.50 would be an objective place to try a long.  To me, locations above are more likely to fail.If we reach $209.50 and it breaks, $208 is the next level of support. 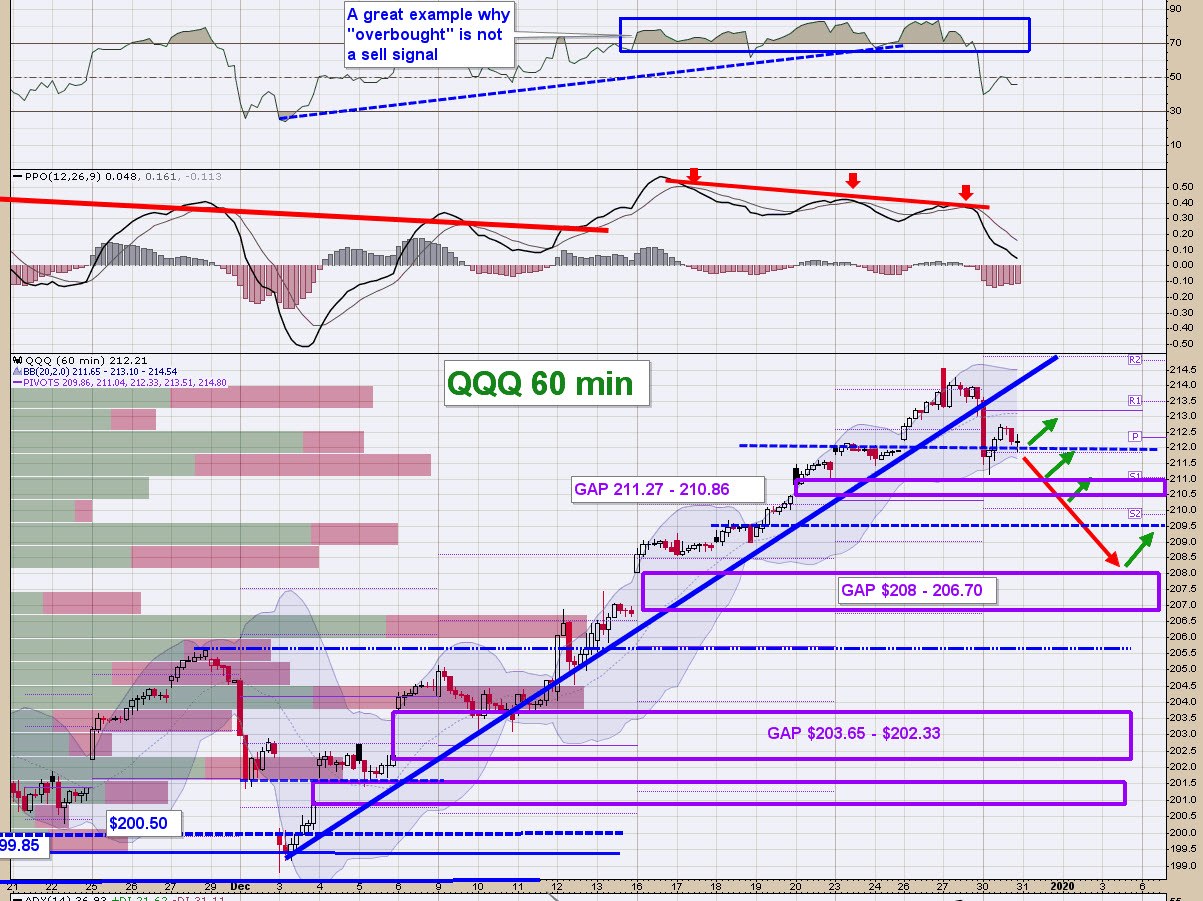 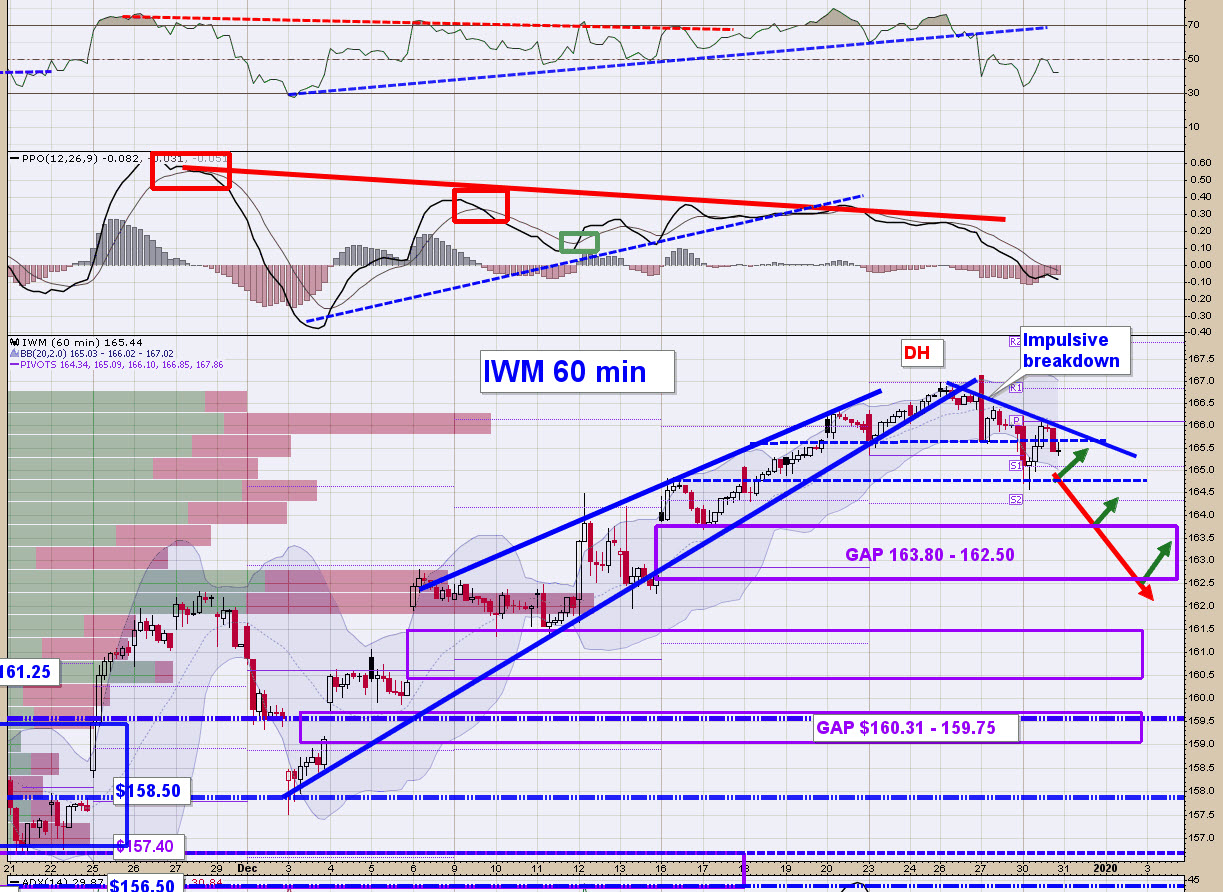 In premarket trading, oil is off over 1%. If you go to your oil / $USO charts, you’ll see the 60min uptrend line has broken so more downside is favored.  Be mindful of any energy longs you have on. Keep those stops tight and respect them. Consider taking profits on them.

Given the market weakness and thin holiday trading, hold off on new longs. Let this week play out and lets pick it up next week. I dont think we’ll be missing much. IMO downside breaks of support offer more opportunity short term than piling into longs on stocks that have not appreciably corrected yet.

GDX was up 2.15% yesterday and closed on the highs. This morning it is up another 25 cents or so. For those swinging this long, I’d move stops up to $29. No reason for this to go below now. Also, if we get a nice move today, harvesting profits by rolling to a higher strike might be smart to de-risk the position and bank so coin.  I like the Feb or Mar 30 calls.  January exp is really only 2 weeks away so if you’re going to roll higher, i’d at least look out to February options expiration.