The Daily Profit Compass  provides the stock market outlook for the day. Key levels and trading locations for the indexes are provided, along with trading plans and timely commentary to keep you on the right side of the trade

I never cease to be amazed at how some speculators will risk half his fortune in the stock market with less reflection that he devotes to the selection of a medium-priced automobile.   Jesse Livermore, Market Wizard

“Perhaps the single best predictor of trading success is the ratio of time spent in preparation to the time spent trading”   Dr. Brett Steenbarger    Psychologist and Trading Coach

Impulsiveness is a psychological characteristic that is present in us all but seems to affect some more than others.   It also manifests itself in different ways and at different times.  A person who is described as “methodical” sometimes becomes “impulsive” when trading.  You’ve probably experienced that either from time to time or a lot.  If you already know you take a goodly number of impulsive trades, the first thing to do is recognize it as a problem, then work to confront it.  One way to confront it is to have a lengthy pre-trade checklist  to slow you down.  Another idea is to require yourself a certain period of time after completing the checklist before allowing yourself to put on a trade. It’s a way to let the impulsivity dissipate.  So let’s say you come up with a bright idea in the morning for a trade. Make yourself a rule that you can’t do anything with that idea until 2pm.  Often times just that 2-3 hour delay will reveal that the idea wasn’t so hot.  If it was a good idea, it will still be a good idea 3 hours from now.  One last technique I will offer is to back off on your time frame. This is especially powerful for day traders.  Back off that 5 min or 15min chart and trade the 1 hour chart.  That will eliminate a lot of half-cocked trades simply by slowing down.

FDX and $CTAS after the bell;  $PAYX and $MU tomorrow. 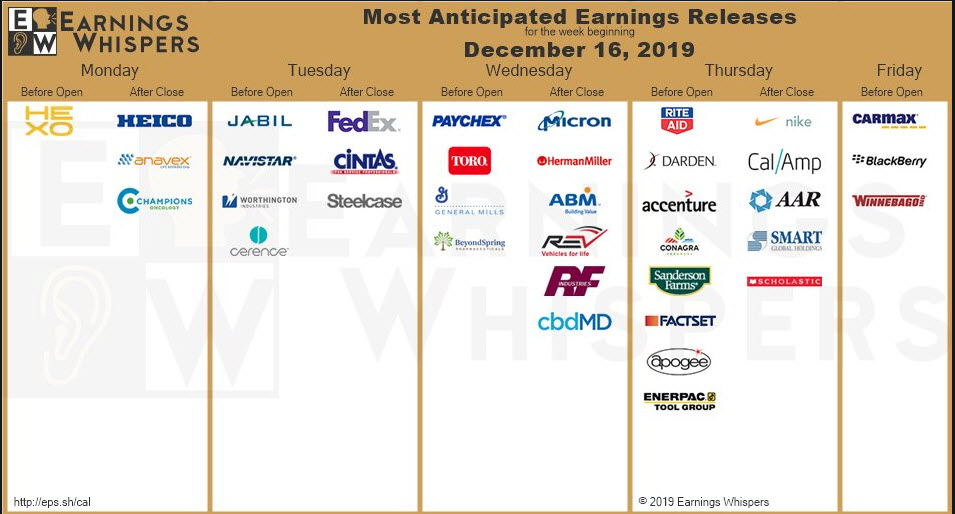 Boeing confirmed late Monday that it will be halting it’s production line for the 737 Max in January as the inventory of completed but undelivered planes piles up. Shares are testing the lower levels of support down around $320.  Also put key suppliers $SPR and $TGI on your radar. They will have less financial wherewithal to withstand a prolonged production holdup than $BA.

In the broader markets yesterday, we returned to the gap n camp market profile.  Overnight gap up followed by tight trading. We did see softness into the close with IWM fading more than SPY / QQQ.  10 of 11 SPDR sectors were green led by energy up 1.34%.  XLI was the laggard held down by high weighting in $BA.

Futures are flat this morning.  Top of mind for traders this morning are the gaps left by yesterday’s gap up. The gaps are sizable so any gap entry may lead to a quick pullback towards Friday’s closing levels.  The technical posture of the market remains bullish both from a technical and seasonal perspective.

Strategy Update:  No Changes. Ratchet up stops; maintain a bullish bias ; Hunt for objective, low-risk trade locations on stocks where you can get in with a clear stop in place in case things don’t work exactly as planned.   Avoid full FOMO of buying everything in sight. Dont sacrifice set -up quality because of FOMO.  There is plenty of time to make money.

Swing Traders.  The chart is bullishly configured with the ema’s bullishly stacked and price above everything. Stay long against the breakout at $315.50 although if price breaks below $319.22 you may want to get short with a tactical hedge and play for the gap fill. 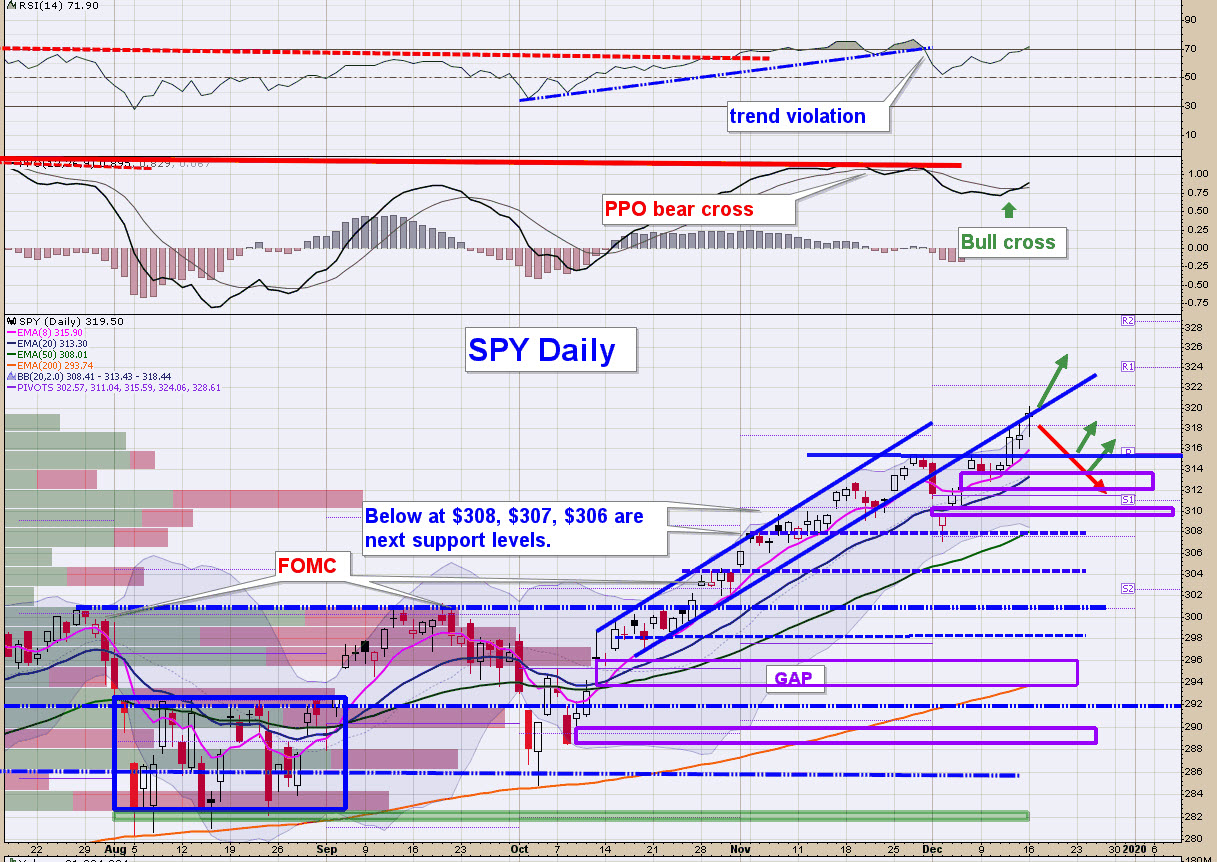 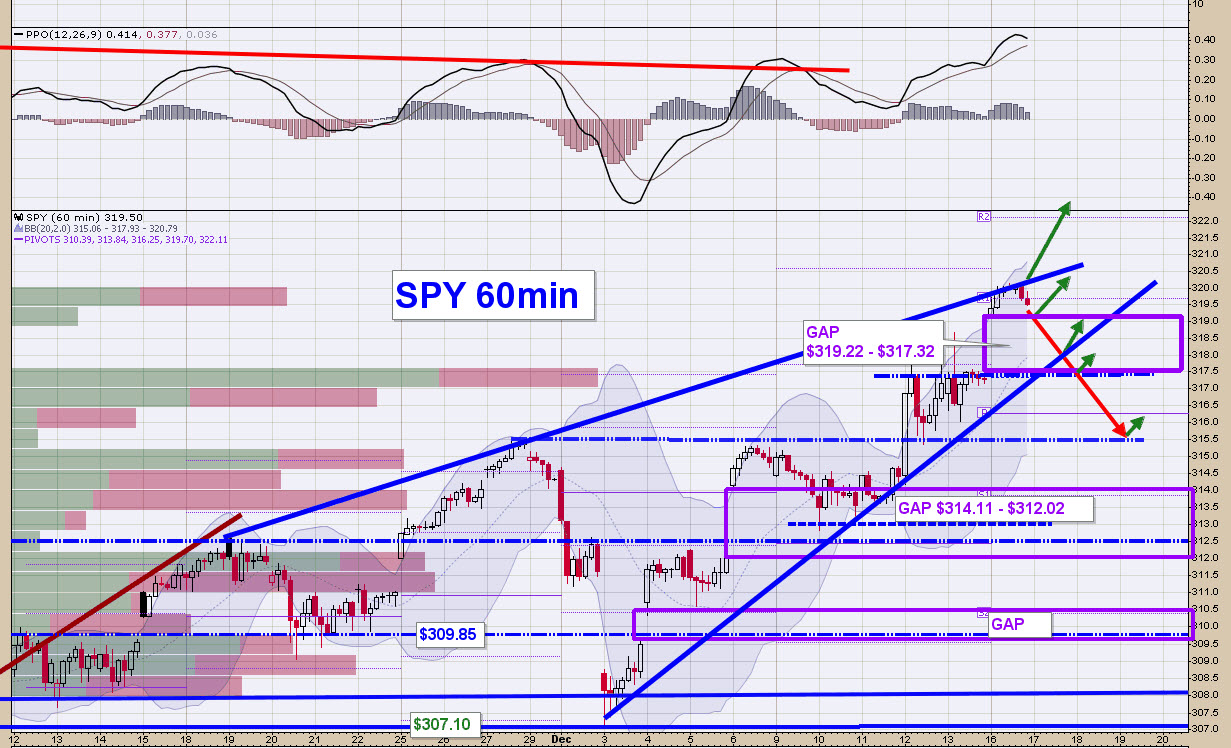 Swing Traders  Stay long against $206 regardless of where you entered on this cycle.  A mover below $206 would likely open door to further downside. 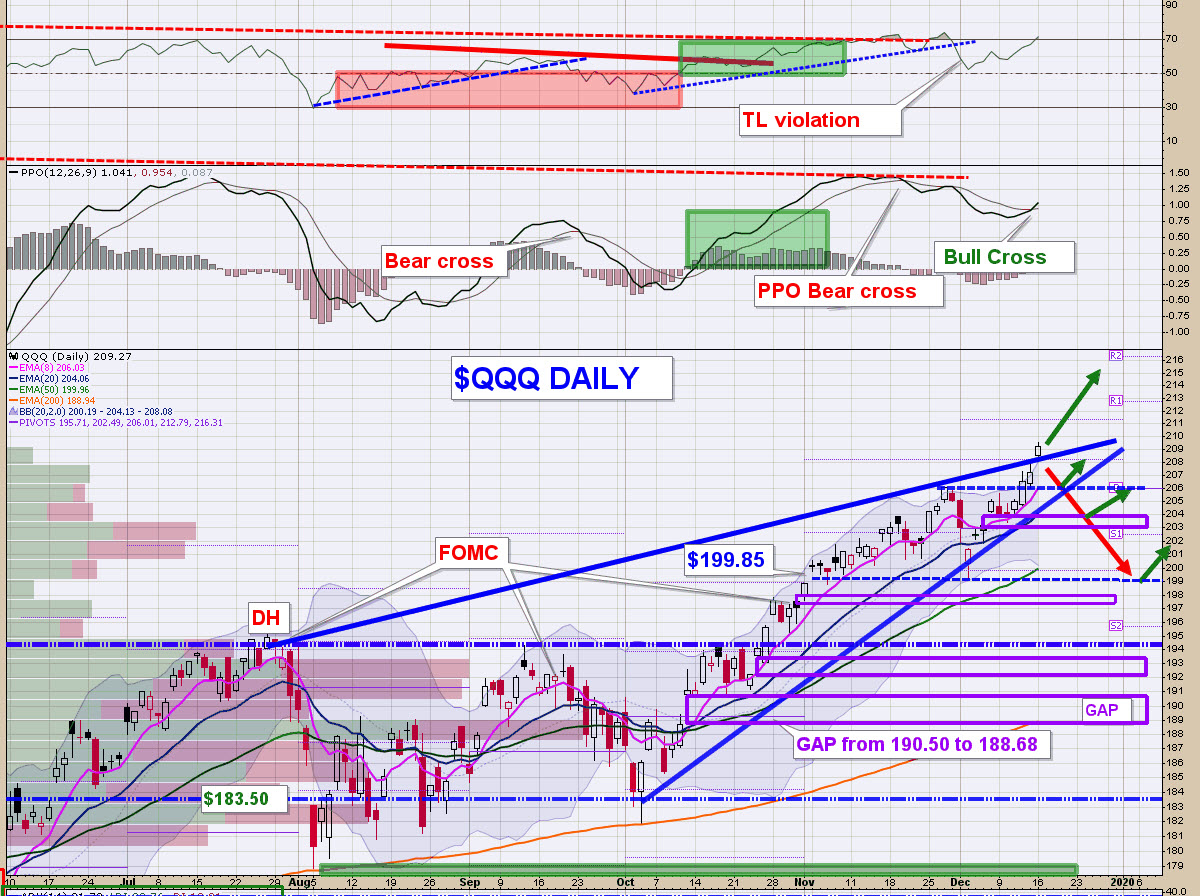 Bull Set up:  If the gap fills to $207.20 it would be an objective place to try a long with a tight stop.  I expect buyers to come in at that level

Price really needs to hold $164 or odds favor a gap fill to $162.73.  That said, big picture the chart remains constructive as long as price holds $160.  Traders can add to or initiate long positions all the way back to $160 if price decides to back test those locations again.  Prices below $160 would begin to tilt the chart bearish. 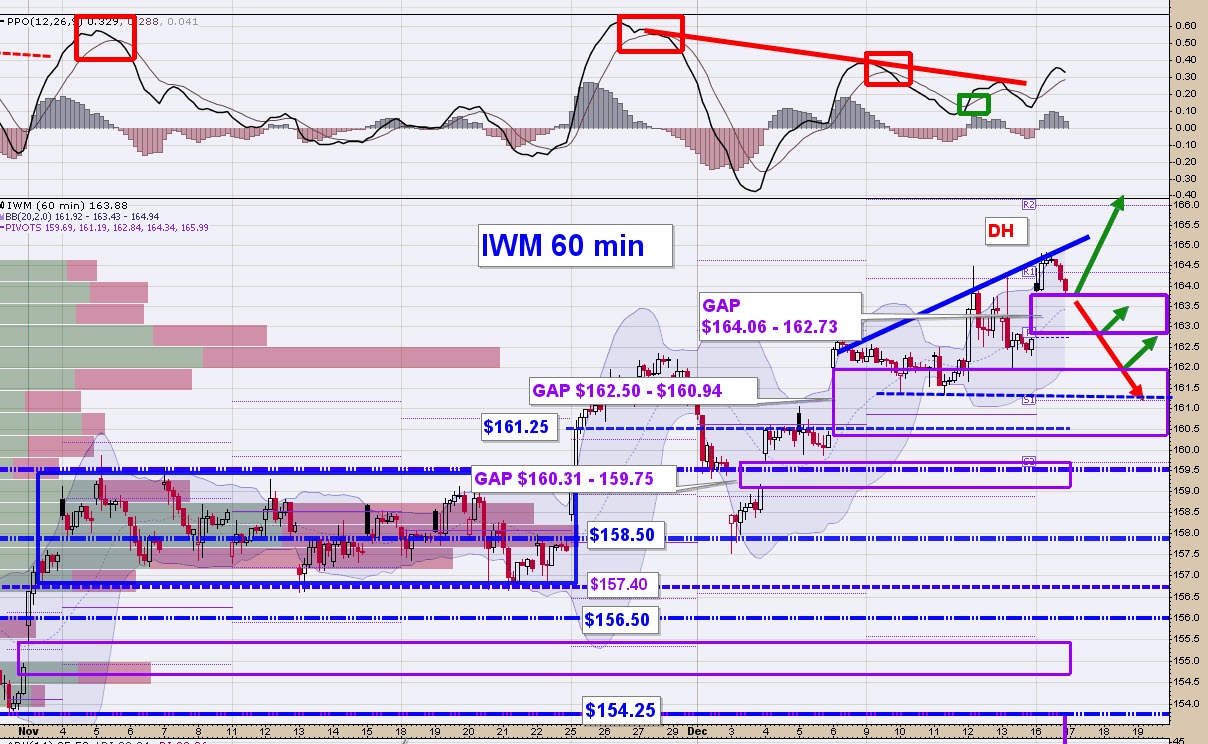 $AMZN  Amazon has been soggy for a while, but now price is testing $1770 which is a key level. A break and hold above $1770 opens the door to the targets shown below. The indicators are supportive of a breakout but dont front run it. Set a stop just below $1770 if you get the breakout. 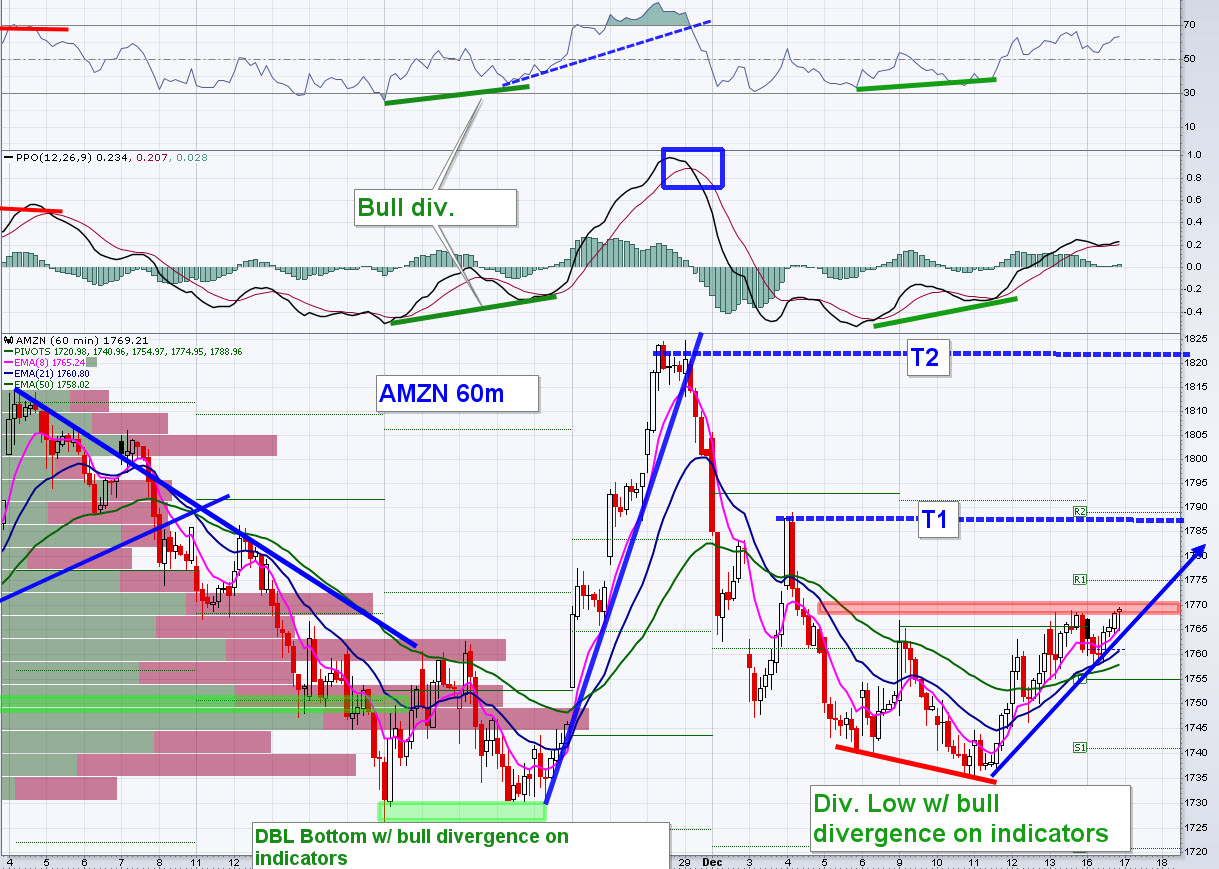 $XOP –  Energy is looking more and more productive. XOP is breaking above the downtrend line and is a long against $22.  Technically the door is open to $24.50. Doesnt sound like a lot, but that is a 10% move. 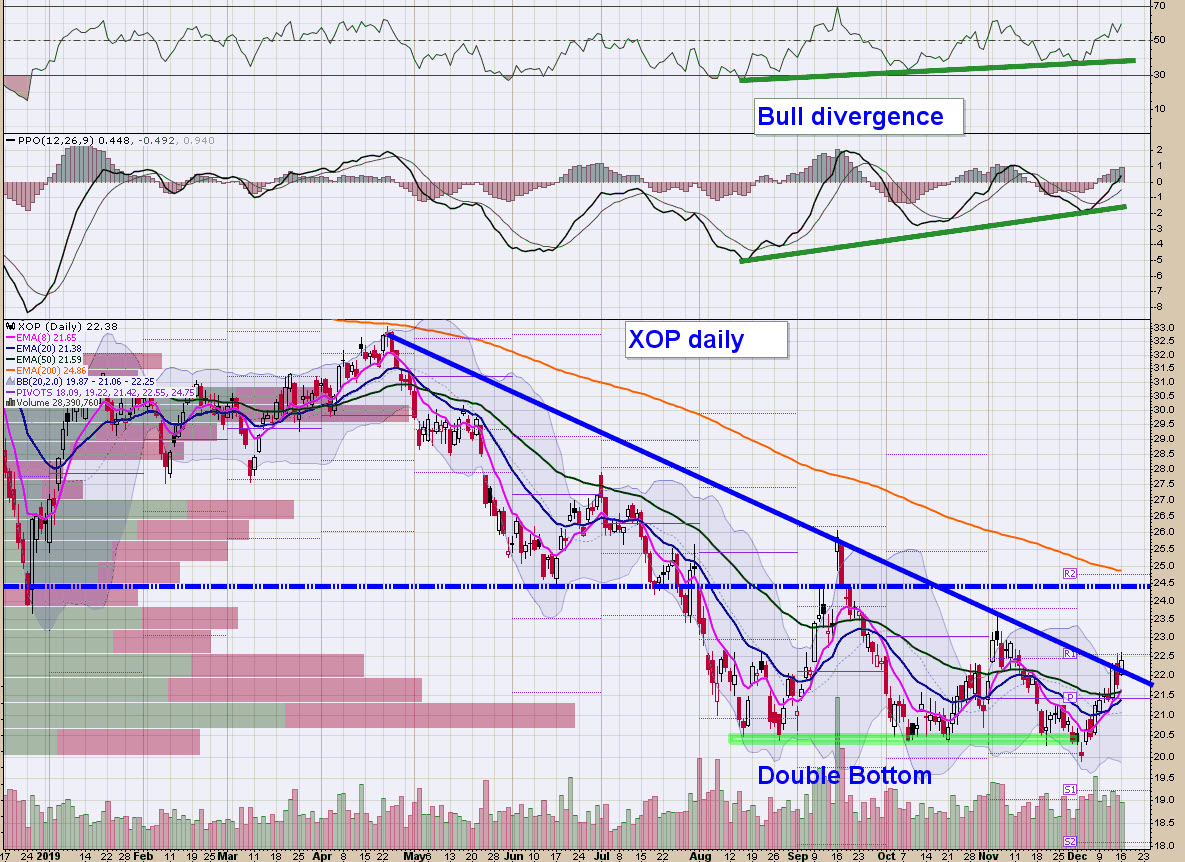 $SLB   Premier oil services name at resistance. Alarm $40. If we get a break out I like the name long with a stop just below. Very objective trade location in a sector that is perking up.

$HAL  Halliburton has already broken above resistance and the 200ema. Although not as tight a set up as $SLB, notice the volume / price void above price. I still like this long against $23.50