The Blog post explore Bob Farrell’s “10 Market Rules to Remember” and applies them to today’s market. The post also provides general market information and technical charts and offers a view on the market’s next direction.

Who is Bob Farrell?

For over 45 years, Bob Farrell was the Chief Market Analyst and Senior Investment Adviser at Merrill Lynch before leaving and starting his own consultancy in the early 2000’s. The Wall Street icon was well-known for his ability to recognize market turns and recognize patterns within the market. After participating in multiple bull and bear cycles through the years Farrell developed 10 rules for investing and trading markets which are still regarded as gospel among Wall Street traders and investment houses.

1. Markets tend to return to the mean over time

When stocks go too far in one direction, they come back. Euphoria and pessimism can cloud people’s heads. It’s easy to get caught up in the heat of the moment and lose perspective.

2. Excesses in one direction will lead to an opposite excess in the other direction

Think of the market baseline as attached to a rubber string. Any action to far in one direction not only brings you back to the baseline, but leads to an overshoot in the opposite direction.

3. There are no new eras — excesses are never permanent

Whatever the latest hot sector is, it eventually overheats, mean reverts, and then overshoots. Look at how far the emerging markets and BRIC nations ran over the past 6 years, only to get cut in half.  As the fever builds, a chorus of “this time it’s different” will be heard, even if those exact words are never used. And of course, Human Nature, never is different.

4. Exponential rapidly rising or falling markets usually go further than you think, but they do not correct by going sideways

Regardless of how hot a sector is, don’t expect a plateau to work off the excesses. Profits are locked in by selling, and that invariably leads to a significant correction that eventually occurs.

5. The public buys the most at the top and the least at the bottom

That’s why contrarian-minded investors can make good money if they follow the sentiment indicators and have good timing. Watch Sentiment surveys for clues about when sentiment becomes overly optimistic or pessimistic.

6. Fear and greed are stronger than long-term resolve

Investors can be their own worst enemy, particularly when emotions take hold.  Frothy bull markets “make us exuberant; they enhance well-being and promote optimism,”   where as bear markets elicits investor behavior such as “Losses bring sadness, disgust, fear, regret. Fear increases the sense of risk and some react by shunning stocks.”

Hence, why breadth and volume are so important. Think of it as strength in numbers. Broad momentum is hard to stop, Farrell observes. Watch for when momentum channels into a small number of stocks. As has been been widely publicized, the market cap of the FATMAAN names ( FB / AAPL / TSLA / AMZN / Alphabet / NFLX ) represent 20% of the S&P index and fully 44% of the  QQQ’s.  I think that qualifies as narrow leadership. 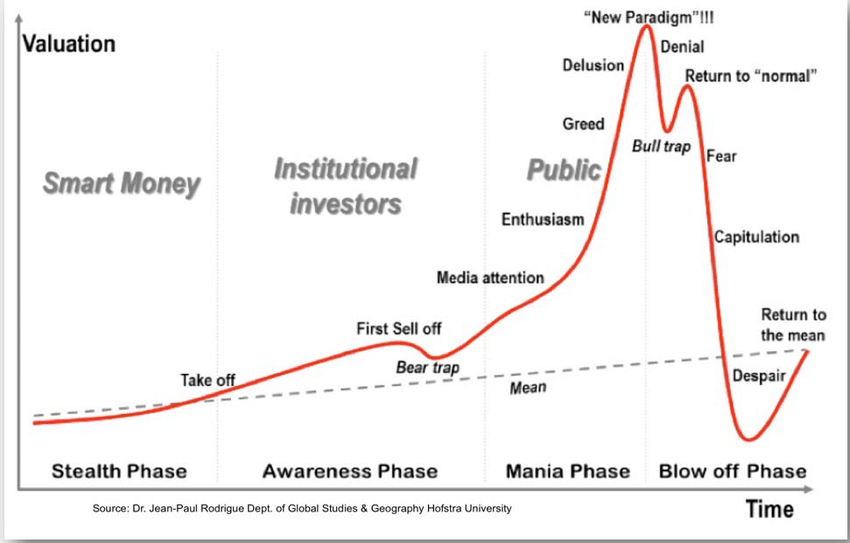 9. When all the experts and forecasts agree — something else is going to happen

As Stovall, the S&P investment strategist, puts it: “If everybody’s optimistic, who is left to buy? If everybody’s pessimistic, who’s left to sell?”
Going against the herd as Farrell repeatedly suggests can be very profitable, especially for patient buyers who raise cash from frothy markets and reinvest it when sentiment is darkest.

Especially if you are long only or mandated to be full invested. Those with more flexible charters might squeak out a smile or two here and there.

Note: Farrell’s Rules section was adapted from previously published article’s from MarketWatch and other sources.

The graph below shows some of the recent manias.  We could also add the Dutch Tulip Bulb mania of the 1630’s, the parabolic advance and collapse of China’s market in 2015, Lumber’s parabolic move and collapse over the past 6months, or $SPI’s wild ride from  $1 to $46 to $10 intra-day this past week. 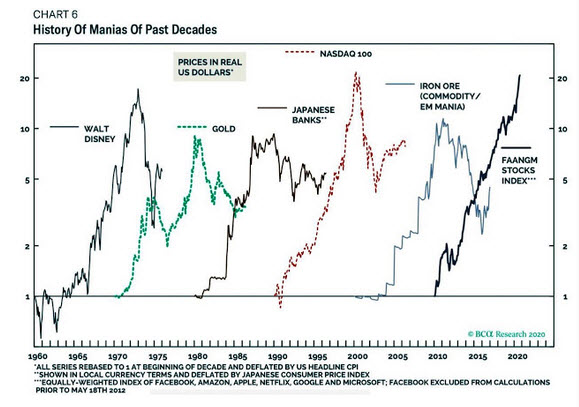 The thing about manias is that few recognize they are in one and if they do, greed over-rides common-sense and traders stay involved trying to milk it to the very end until they are inevitably trapped. Are we in a mania now? Hard to say…it’s probably above my pay grade to offer an answer. I will say this. It’s hard to deny some of the recent manic call buying that saw fully 80-85% of CALLS being bought with 2 weeks or less until expiration. That’s panic buying.

USD Direction is a key

One of the reason’s I’ve been bearish on Gold is that I believe the path of least resistance for the US Dollar is higher. The recent rise over the past 10 days, coupled with massive net short positioning is causing a short squeeze. The second chart shows that equities do not like a rising USD.  The third chart shows the Euro ( 63% of the USD index ) breaking below a massive topping structure with almost zero technical support until much lower.  Taken together I think this is equity negative. 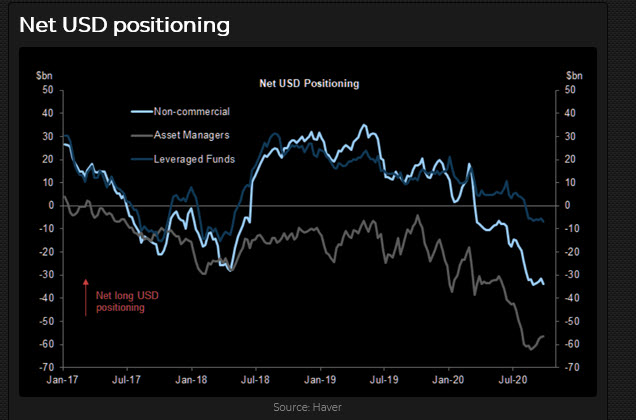 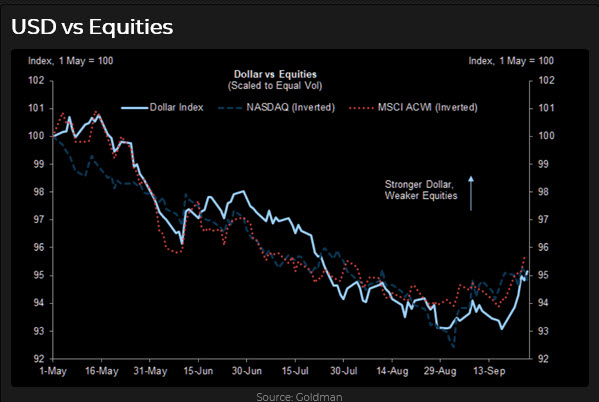 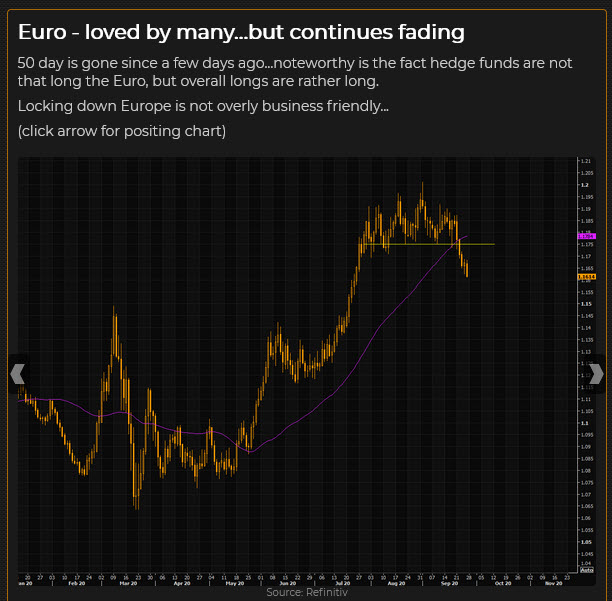 Unless the bears can break the FAAMG /  FATMAAN names, the market won’t go down. Watch that trend line!! 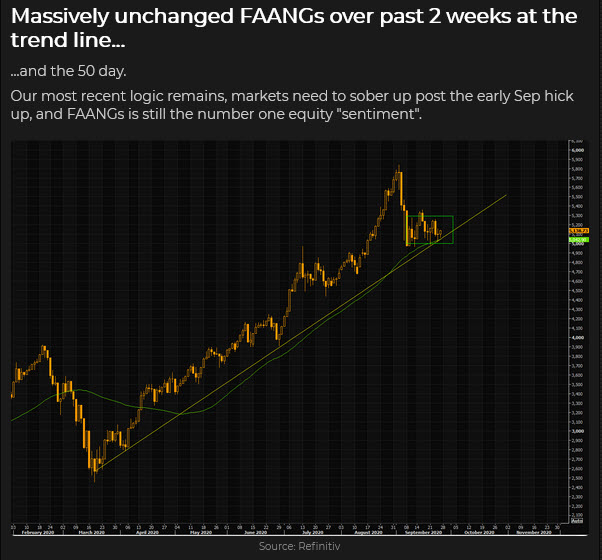 The first graphic shows bull sentiment coming off the boil. That factoid coupled with hedge funds flipping short is contrarian bullish. Will the market let hedgies win?  Lastly the market pull back has not deterred CALL buyers from piling into the NASDAQ.  I could show several additional graphs showing a complete lack of fear in this market.  Although the burn off in bull sentiment is helpful to bulls, I don’t think you can have a durable bottom with rabid call buying.  Bottom line, is that from this perspective mixed messages abound. 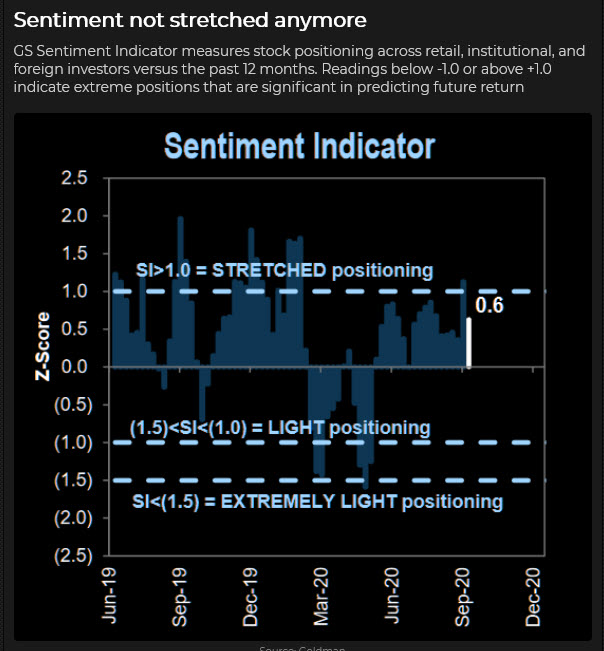 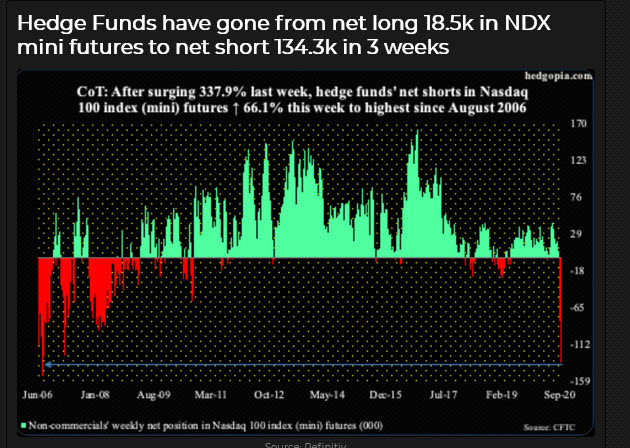 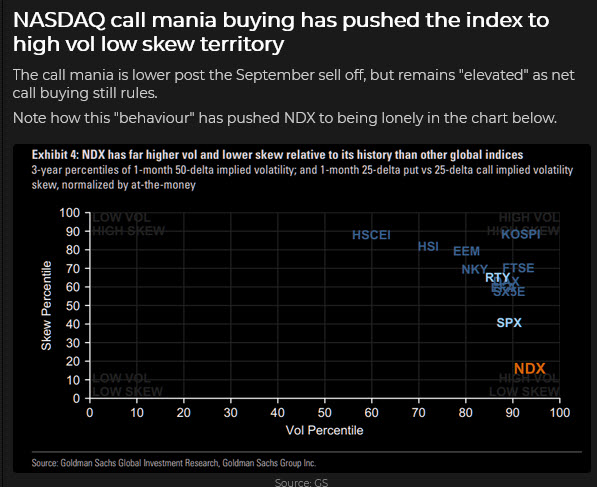 Equity Flows get wild and Liquidity is almost non-existent

Funds flows show investors are confused.  Massive inflows followed by massive outflows.  The poor liquidity in markets persist. This lends itself to wild swings and added vol from day to day and week to week. 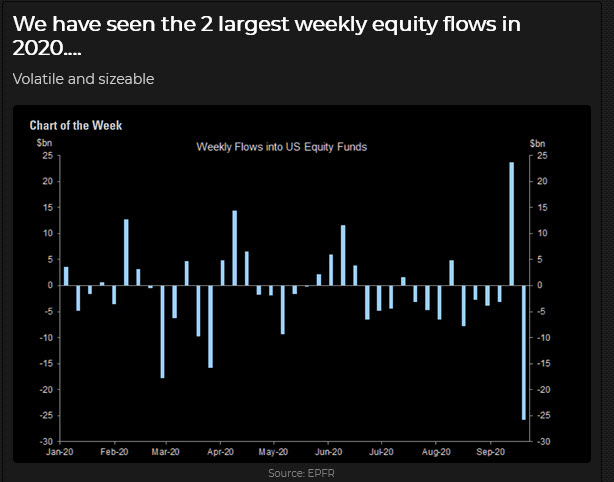 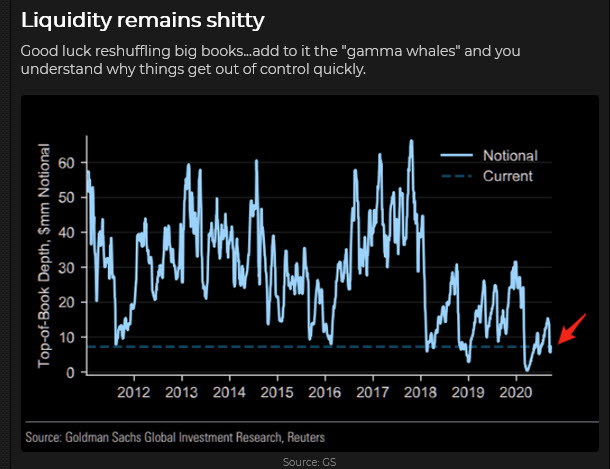 What are the Charts saying? 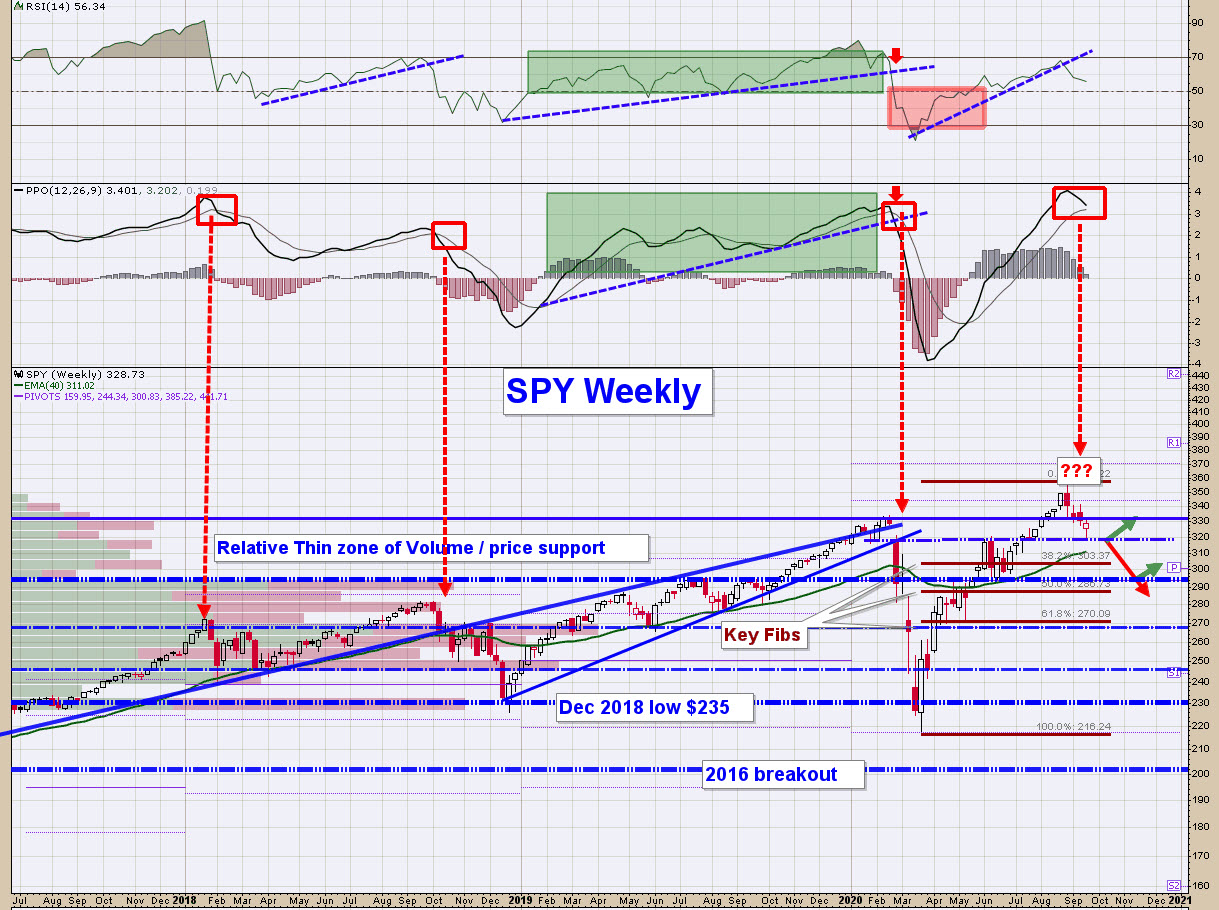 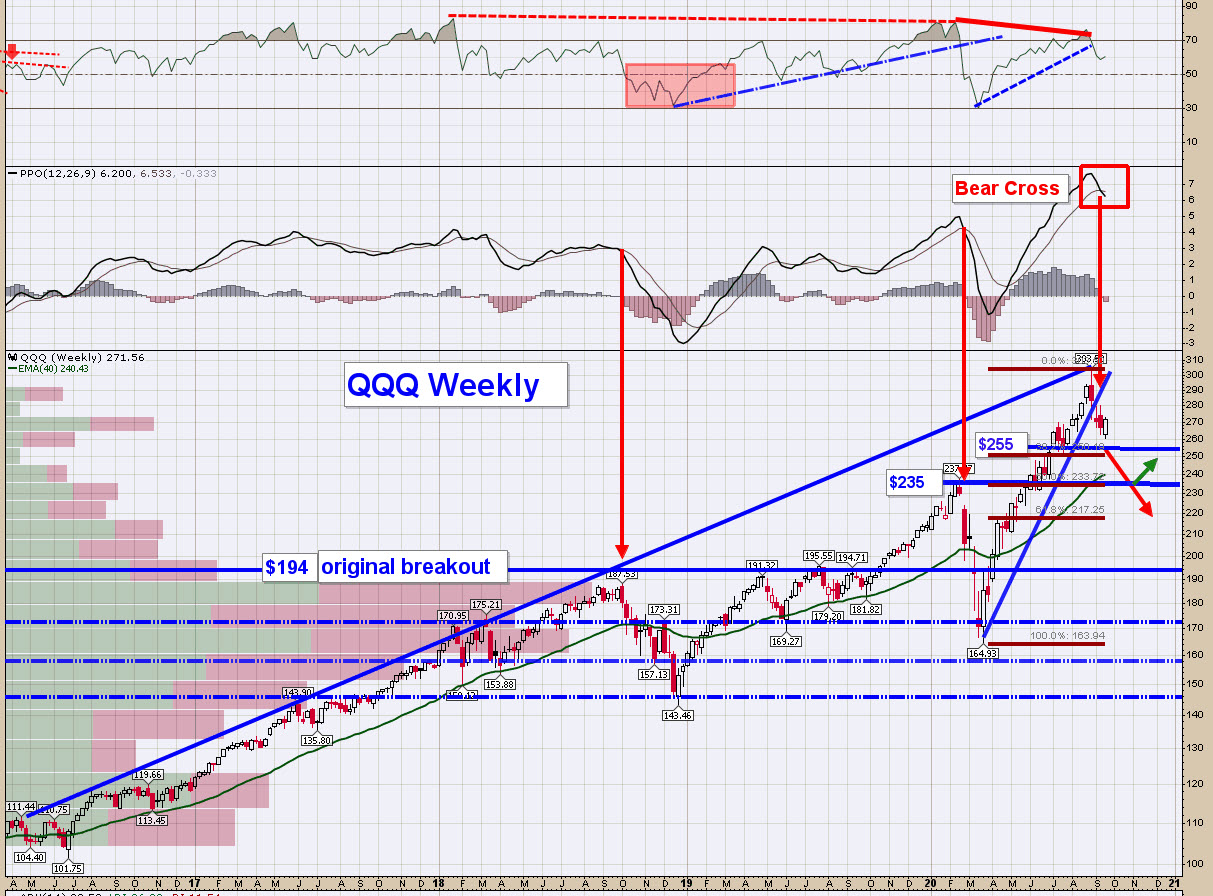 Pulling it all together – Strategy and Outlook

No Changes –  For me, the backdrop still says Risk Off.  Here’s why.