The Daily Profit Compass  provides the stock market outlook for the day. Key levels and trading locations for the indexes are provided, along with trading plans and timely commentary to keep you on the right side of the trade 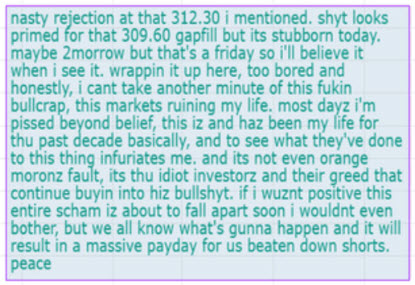 I clipped this rant off a message board a couple weeks ago.  As you can tell, this trader has a melt down during his post.  Having a thesis is fine. Having a thesis proved wrong by price movement happens all the time.  But if you take personal offense when price goes against you to the point of being angry each day and believing the market is conspiring against you, just stop trading and consider professional help.

It is difficult enough to win with a positive mental outlook let alone a destructive one.  The mistake this trader is making is that they are attempting to have a personal relationship with the market. Why else would he feel betrayed when price went up instead of down?  A much healthier way to view the market is as an information machine. An information machine that does not know who you are or what you do with the information.  If you view it in this way, you’ll never ever make the mistake that the market is your friend or your enemy.

If you want to dive into this more deeply, I wrote a blog post on “Engaging your Inner Observer”  which is a very powerful technique to avoid the mental downhill spiral this trader is experiencing. Find it HERE 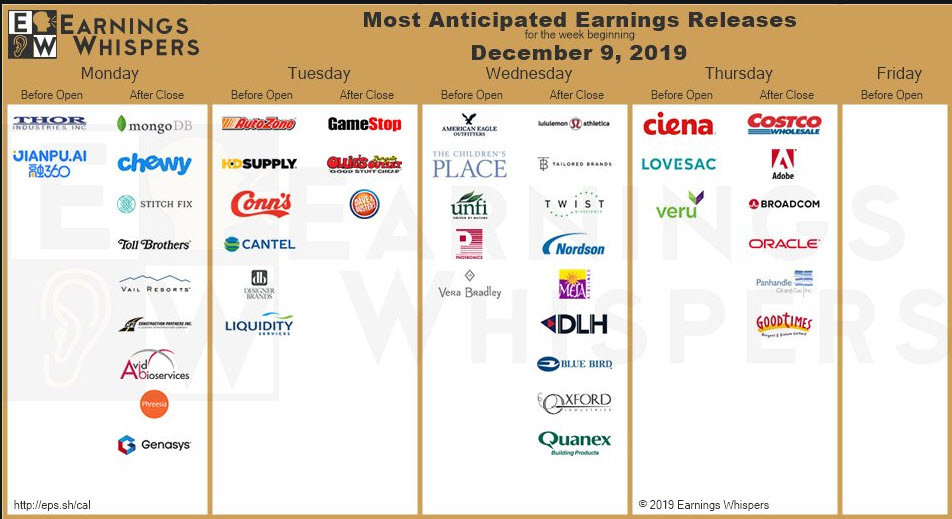 The combination of Trump declaring a Phase 1 Trade Deal with China and Boris Johnson securing the biggest conservative margin of victory since 1987 has risk assets rockin.

Market does not seem too concerned that we have not heard a peep out of China since the announcement.  Also the legal wording of the agreement has not been established. ( Sounds like the October deal )  Anyways, it looks as though the new Dec 15 tariffs wont go into effect which was the markets main concern.

Also, knowing the FED will be pumping in $500B of extra liquidity over the next 2 weeks doesnt hurt either.

The risk-on sentiment was confirmed  by treasuries which plunged as yields spiked up double digits. The 30-year yield gained the most in 3 months.  As should be expected, cyclical S&P sectors gained while defensive bond proxy sectors dropped. Banks stocks soared as yields spiked and yield curves steepened. High yield credit, which acted well after the FOMC , added to gains.  Completely lost in all the green shoots were the initial jobless claims which popped up 49K to 252K for the week ending Dec 7.  Keep this on the radar. Its a sizeable uptick.

As the markets blow the lid off the top, one of the most important things we can do is find low-risk, objective trade locations. While it may not seem so at the moment, there is plenty of risk out there under the surface.  We want to be shooting at names / charts with clear lines in the sand to shoot against where we’ll know when we are wrong.  Resist what ever urges you may have to buy all-time highs all over the place.  An all time high is fine if you have a clear idea of what the downside risk is.

Strategy Update:  With the apparent destruction of the 3 pillars of risk this week ( FOMC, UK Election, Tariffs ) the market may just rip to year’s end.  We’d certainly want to participate in that if it happens but in a controlled objective fashion vs raging FOMO.  Hunt for objective, low-risk trade locations on stocks where you can get in with a clear stop in place in case things don’t work exactly as planned.

Time to raise Stops:   If you’ve been long from lower levels, raise your stops. Suggested locations below.

Swing Traders.  Stay long against the breakout at $315.50. Prices are above the 8ema with all the ema’s bullishly stacked. 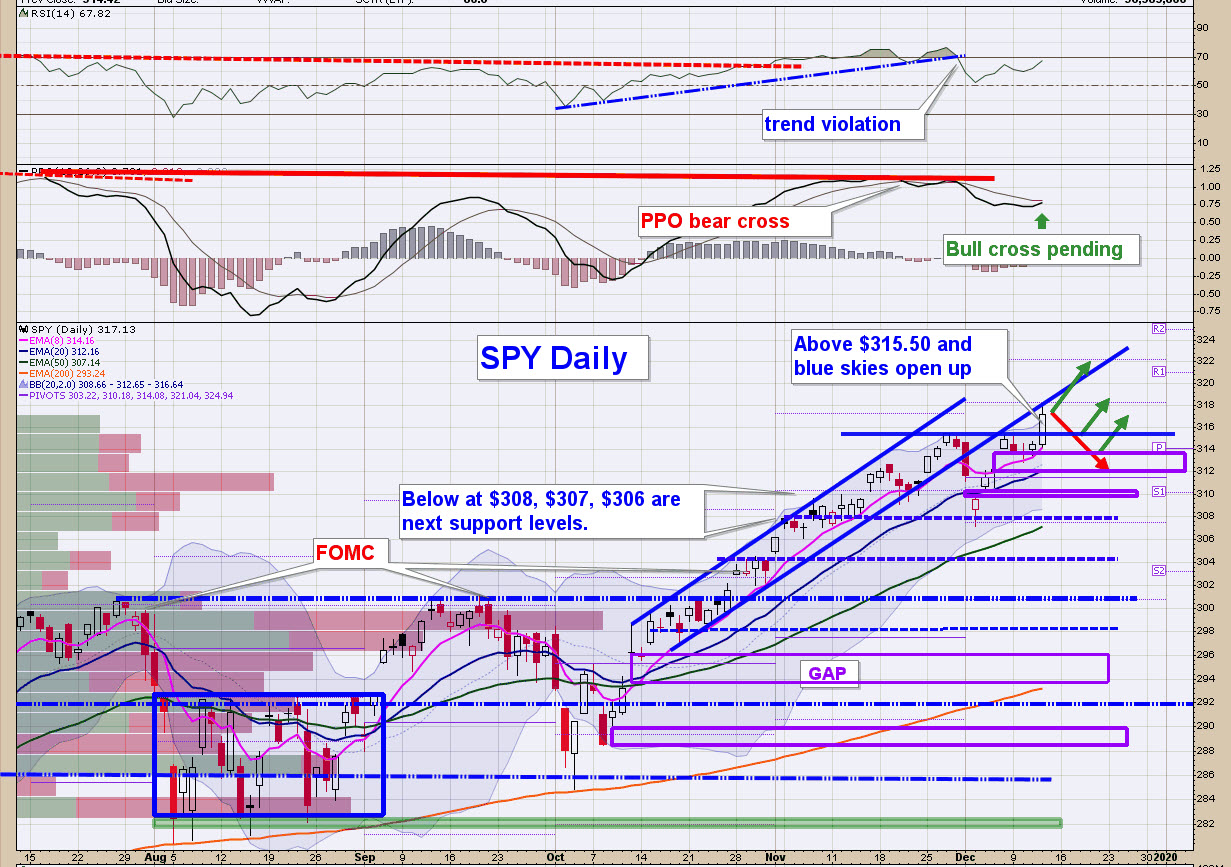 Swing Traders  Stay long against $204 regardless of where you entered on this cycle. For those that want a really short leash, a stop just below $206 would work.  As always, rolling option positions up and out would accomplish similar results by harvesting profits while still staying long. 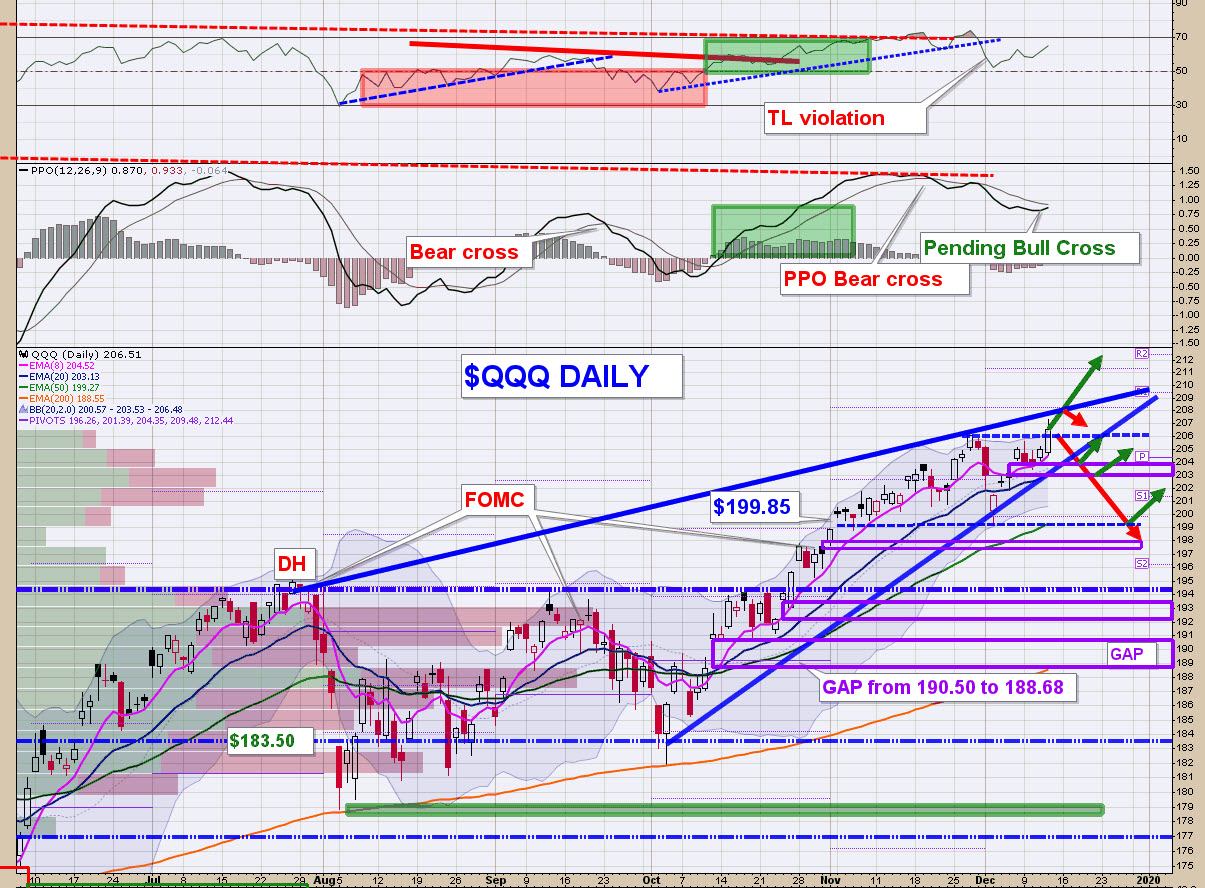 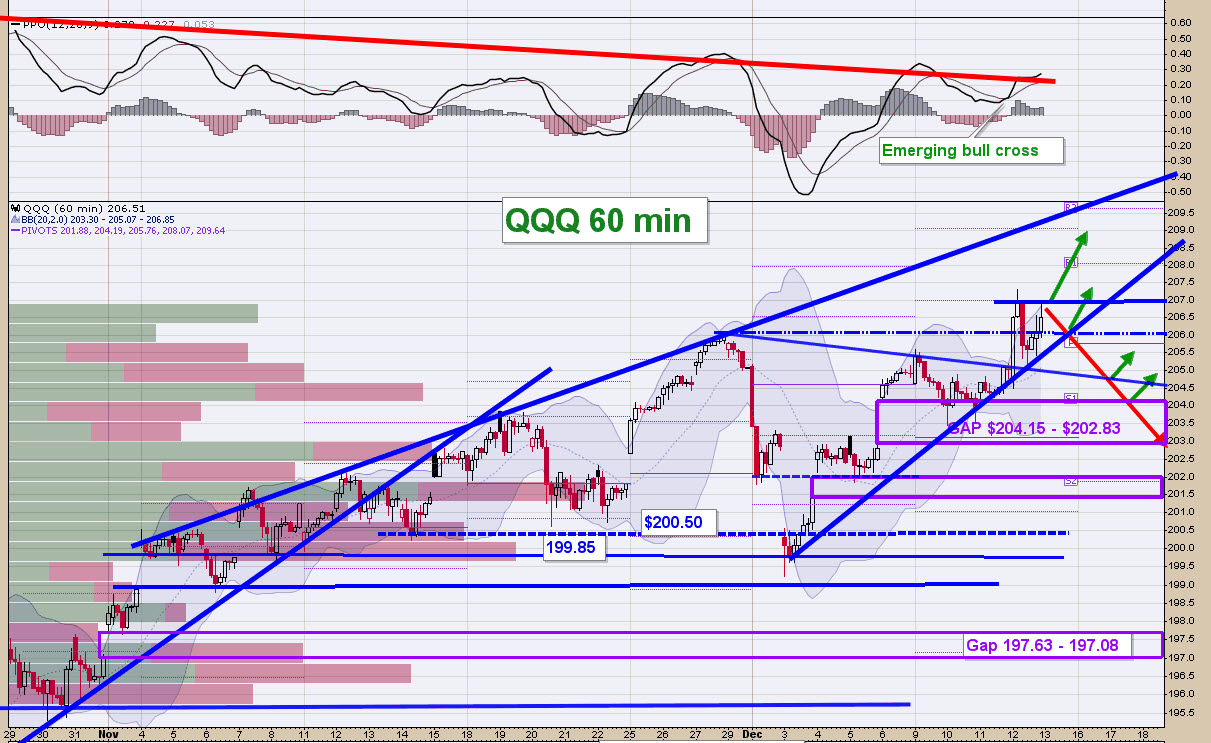 Move stops to $162.50.  Traders can add to or initiate long positions all the way back to $160 if price decides to back test those locations again.  Prices below $160 would begin to tilt the chart bearish. 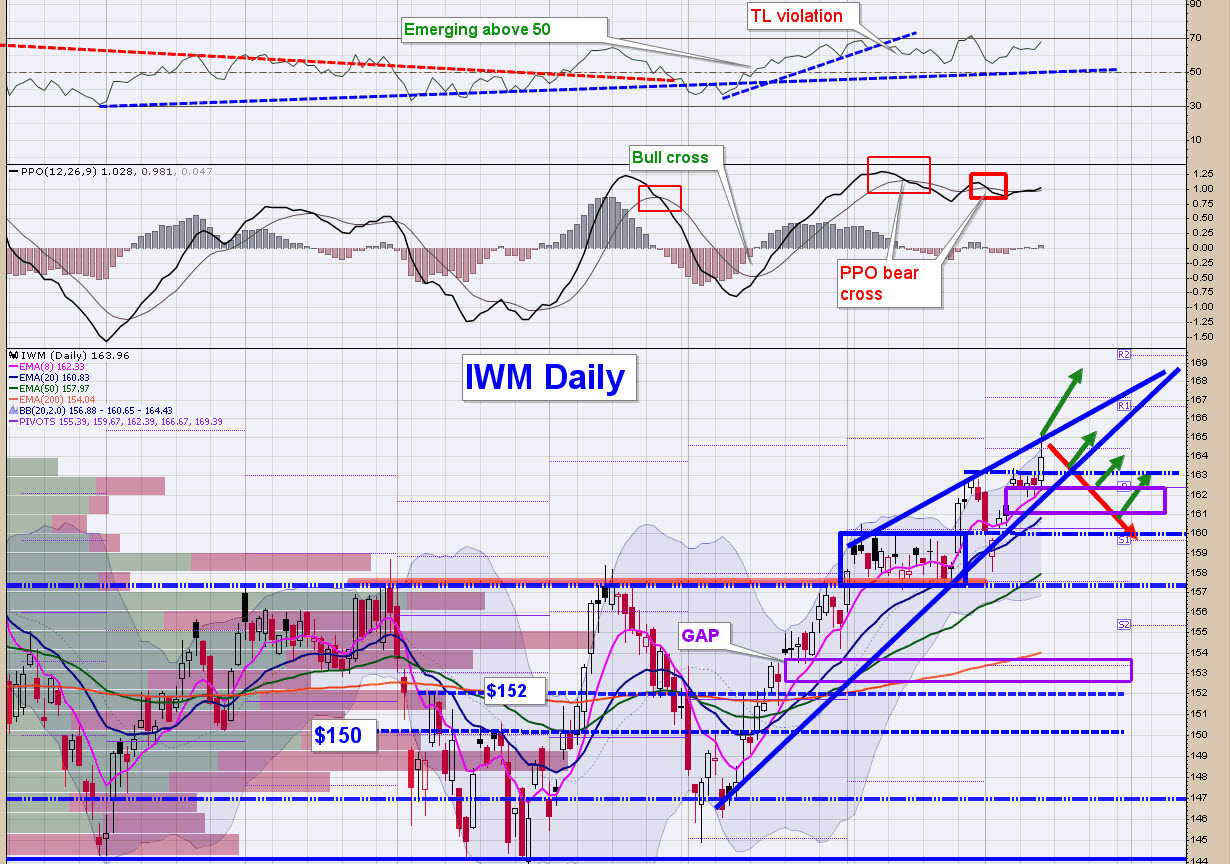 Bear Set up: The gap between $162.50 and $161 was never filled and represents the first real opportunity for bears. 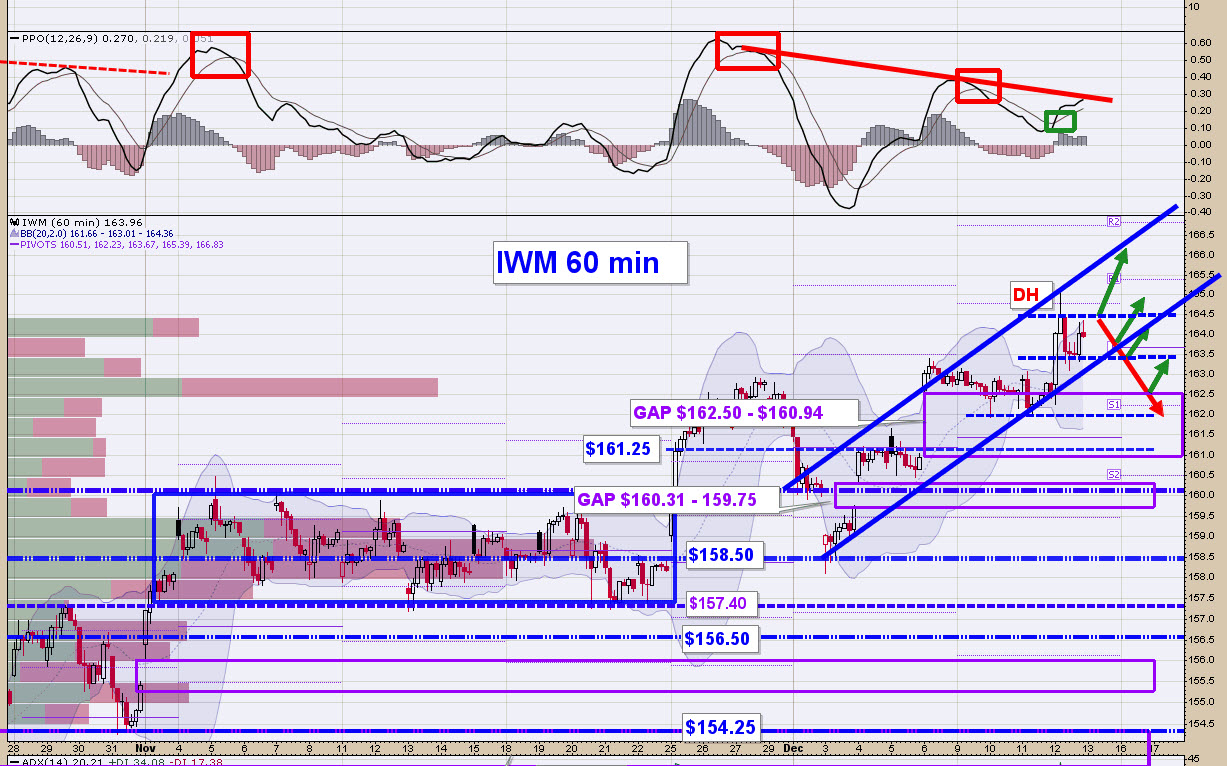 Flat on the indexes

$TXN Long trade idea from the other day performing nicely. Gap almost closed.  Take profits or roll higher once gap is filled around $128.

$CASY – Short idea presented the other day triggered yesterday as price lost the 200ema.  While the market would suggest otherwise, price looks to be heading lower. Shoot against the 200ema; that is your stop. The volume / price void should make the path lower easier than you’d otherwise expect.

$DBA  Agricultural ETF is breaking out and taking out both DT resistance and the 200ema.  You’re not gonna get rich here but ag commodities at moving higher. $JO, $CORN, $BAL are individual ag ETFs that are looking productive if you want to go that route.

$SAGE  The bottom fell out 2 weeks ago setting up a bracket trade. Price is now at the gap entry. If you see price move above you can get long with a stop below. While expecting a $70 gap fill might be unrealistic, the path upward into the gap can still be a great trade.