Are traders losing their appetite for restaurants?

A complete restaurant group technical review including 23 leading names. Key trade locations are identified for all with commentary to keep you on the right side of the trade.

The restaurant group is under pressure with many names, including group leaders like McDonald’s and Starbucks breaking down.  It’s an odd occurrence given all we’ve heard about the consumer doing so well.  Many more weak stocks than strong ones.  Quite a few names threatening to break down to multi-year lows. Overall the group is out of favor at this time.

If you are not familiar, the “$DJUS” designation for every industry group.  Charting the group as a whole gives you a quick snapshot of how the group is performing.  While there are always outliers, generally speaking, if the Group chart is bullish, most stocks will be bullish. The contrary is true also.

Here you can see price broke below its major uptrend line and has proceeded to carve out a down channel.  I dropped in Fib retracements in purple. Given the posture of the indicators and the fact that there isn’t much lateral support nearby, I think a move to the 200ema is favored. 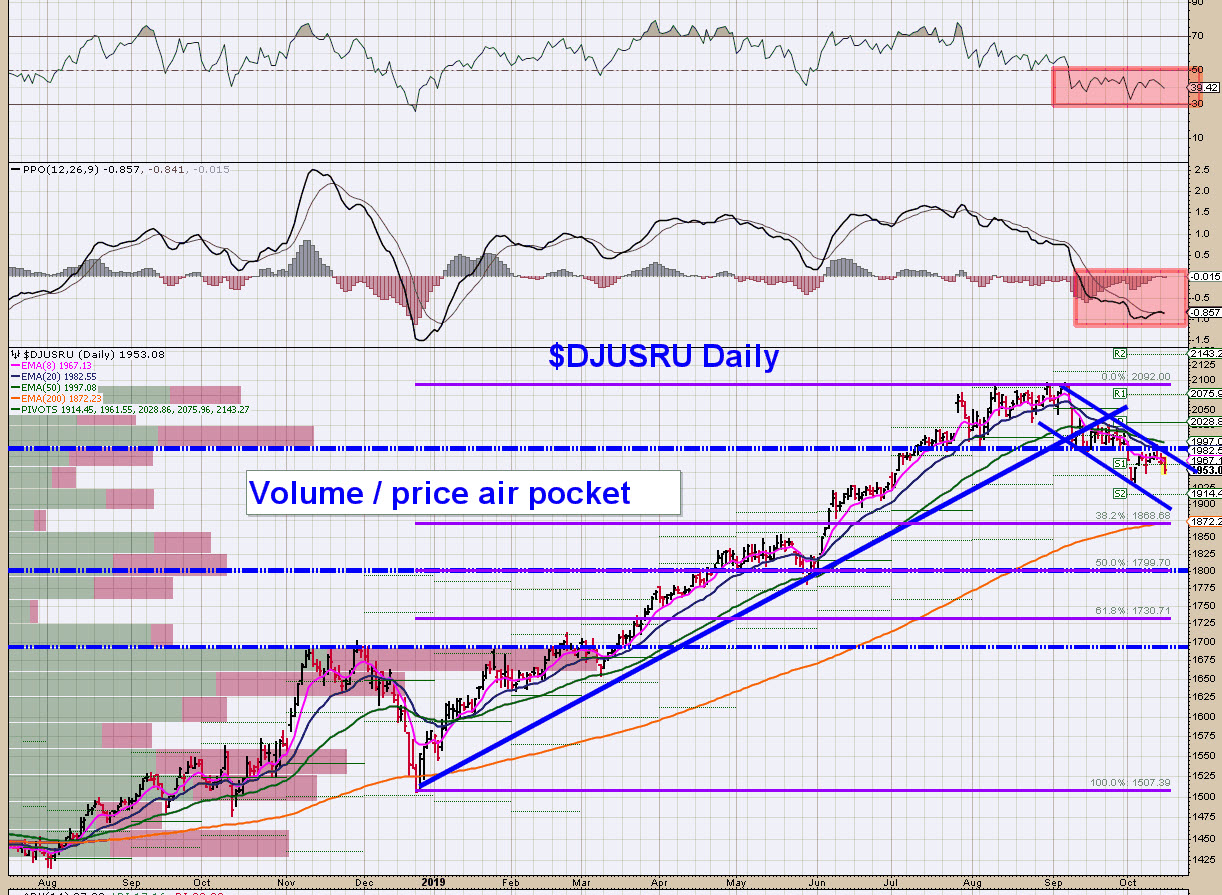 Dreadful chart. Talk about a power fade. Anyhow, as you can see, price is at support.  A break here favors a move to $27.50.  Other scenarios are in the annotations.  Set some alarms and be patient. It either bounces here or breaks down.

$CAKE Weekly Cheesecake Factory.
Price currently in no mans land caught between support and resistance.  I favor a move to support at $37. A bounce from there would likely take it back to $41.  Trying a long at support is the objective, low-risk play. That said, dont get married to it.  Given the poor sector momentum dont be surprised if a breakdown happens.  Below $36.50 is nothing but thin air.  Getting short just below $36.50 would be a great trade location with little risk.  Place a stop just above.

Price is in no man’s land with no objective entry.  Alarm $150. That would be the next location of interest where either a bounce or breakdown will happen.

The rocket ship has hit a wall at $840 and in the process has marginally violated its uptrend line. The massive bearish divergences increase the likelihood that any marginal breakout would fail.  THat said, if price does break out, $840 is a hard stop.  If the group dynamics catch up to the name, there’s a good chance for a pull back to the 200ema. The Fibs in purple are predictive of a deeper pull back if the 200ema fails. If you’ve got huge embedded profits in the name, I’d suggest taking some off the table and / or moving stops up tight. 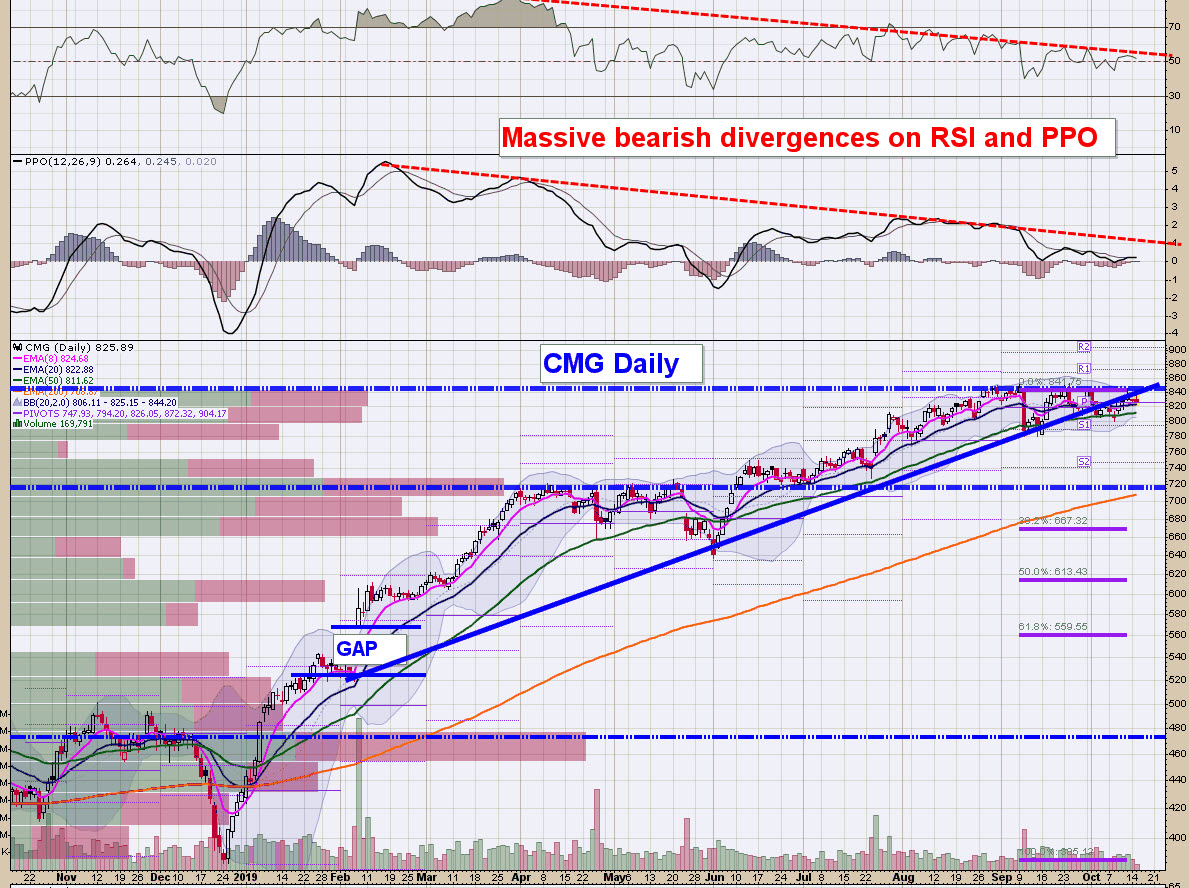 Another rocket that has run out of fuel. My best fit uptrend line is in solid blue. THe benefit of the doubt trendline is dashed.  A touch of the dashed TL  is the last chance before a touch of the 200ema.

Price is consolidating in a flat flag. A break of the flag targets $50 on a measured move basis. As is my practice on flags, also alarm the top side of the flag / box.  Although everything in the chart says lower, I have been known to be wrong at times. A top side break out would be bullish and offer a long trading opp.

One of the nicer charts in the group. Nice up trend channel with price at a “value buy” right on the trend line. If you take it long, set a tight stop just below. If price violates the line to the downside, a quick flip to bearish is objective and low-risk.  Once a significant channel breaks, lower prices are favored. 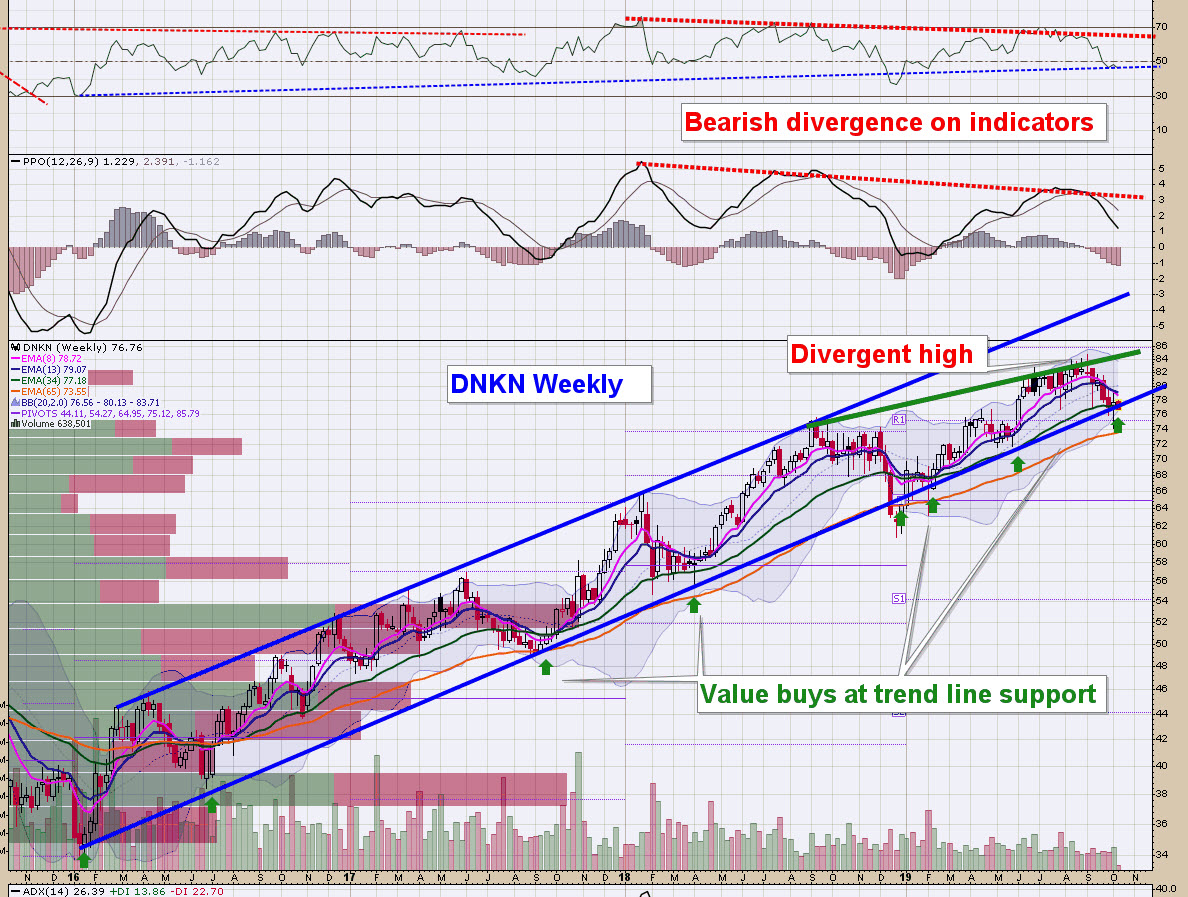 Price in the middle of a wide trading range.  Traders in the middle often get chopped to pieces.  Wait for price to reach the box extremes then buy support or sell resistance.  The only way to trade this one at the current time.  The major trend line has broken so lower prices are favored but nothing to shoot against at this time.

Super tight set up at a key spot.  As i write this the broad averages are up 1% and this one doesnt move.  If bulls are gonna save this, they need to step in now. Any lower and price will be on the wrong side of the chart. 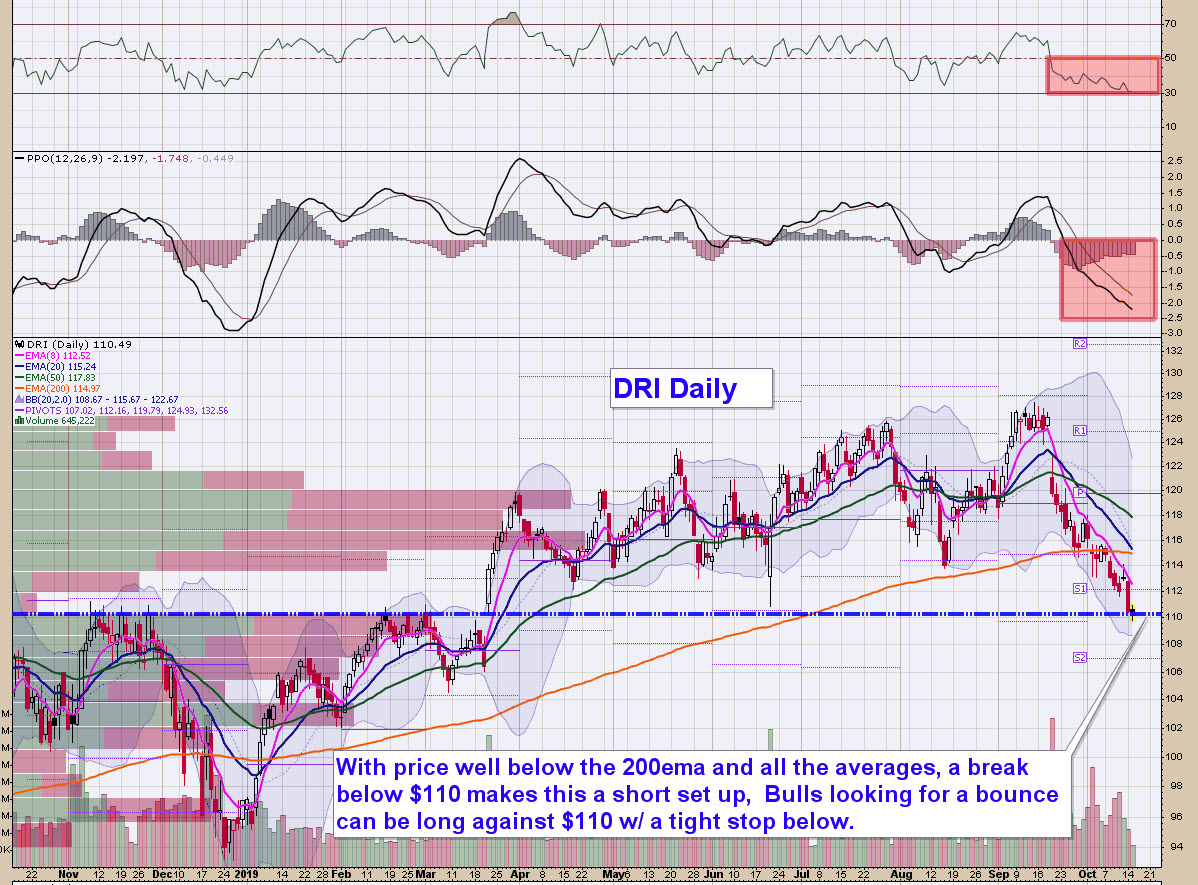 Consolidating in a triangle and grinding toward the apex. Alarm the high and low sides of the triangle for a heads up on a potential actionable entry point. I’d say the posture of the chart is neutral. Could break either way.

$JACK Weekly Jack in the Box

Just now rejected off the downtrend line. A bit too far away from it to be actionable in my view. I’d alarm $92 for a possible kick back or even a breakout, but aside from that, I think we are a week too late for a good tight entry.

THe premier name in the group has had a great run but has now broken down below trend and is consolidating is a box. Notice that the 200ema on the daily aligns with the trend line on the weekly.  I favor a move to $200 and a touch of the weekly uptrend line. I’d be a motivated buyer there for a try at a long with a stop just below.  All bets are off if price loses the 200ema and would likely be a sign of deeper problems for the group as a whole 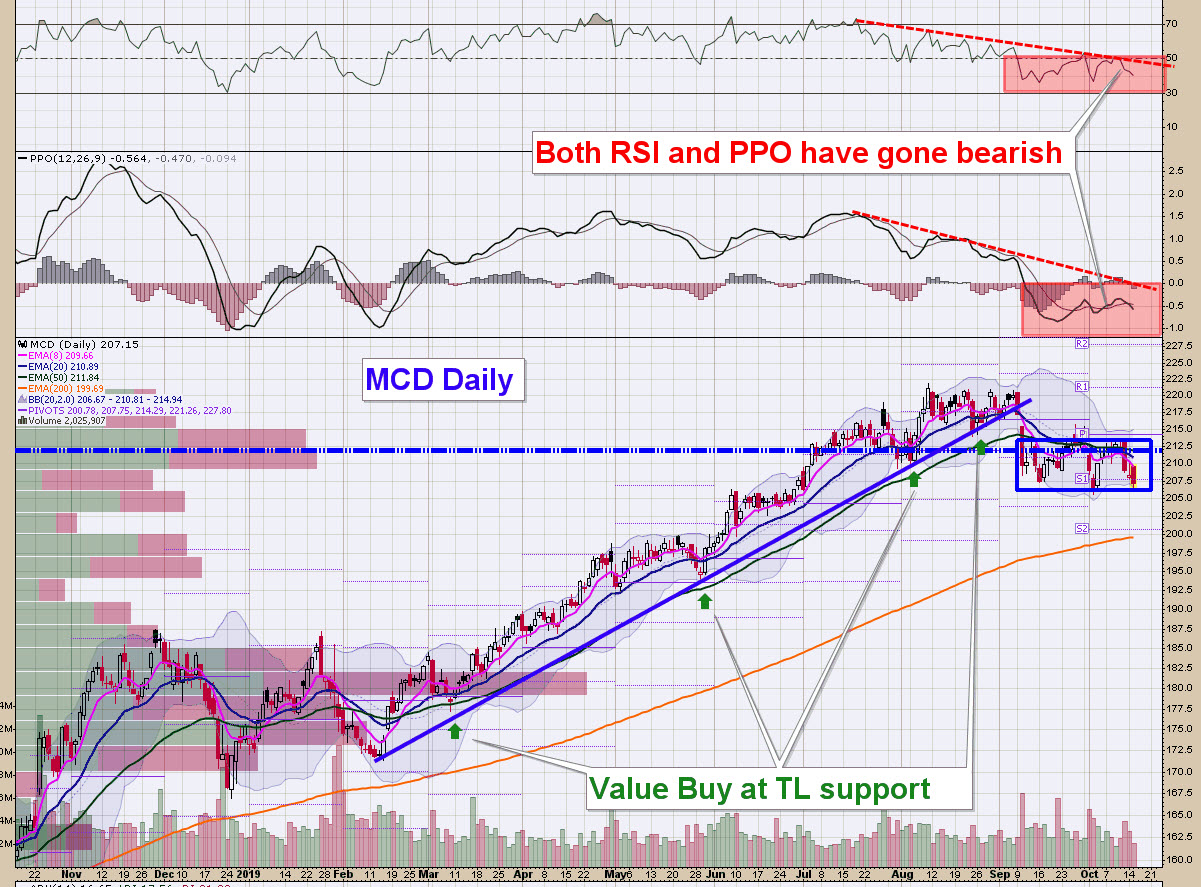 Buyers of support at $37.50 have been rewarded for a long time. Now  however we are not seeing a V -type bounce as in past tags of the level. Price has spend 4 months hanging around the lows.  Alarm just below $37.50 for a possible breakdown which would be multi-year lows.  Although it isn’t shown , there is a big gap above $43. On a move into that gap, I’d be a motivated buyer. Alarm $43 for an upside move.

Nice chart. Price is at resistance. Alarm $54.50 for a breakout

Another consolidation box below the main trend.  Chart annotations give downside targets on a breakdown 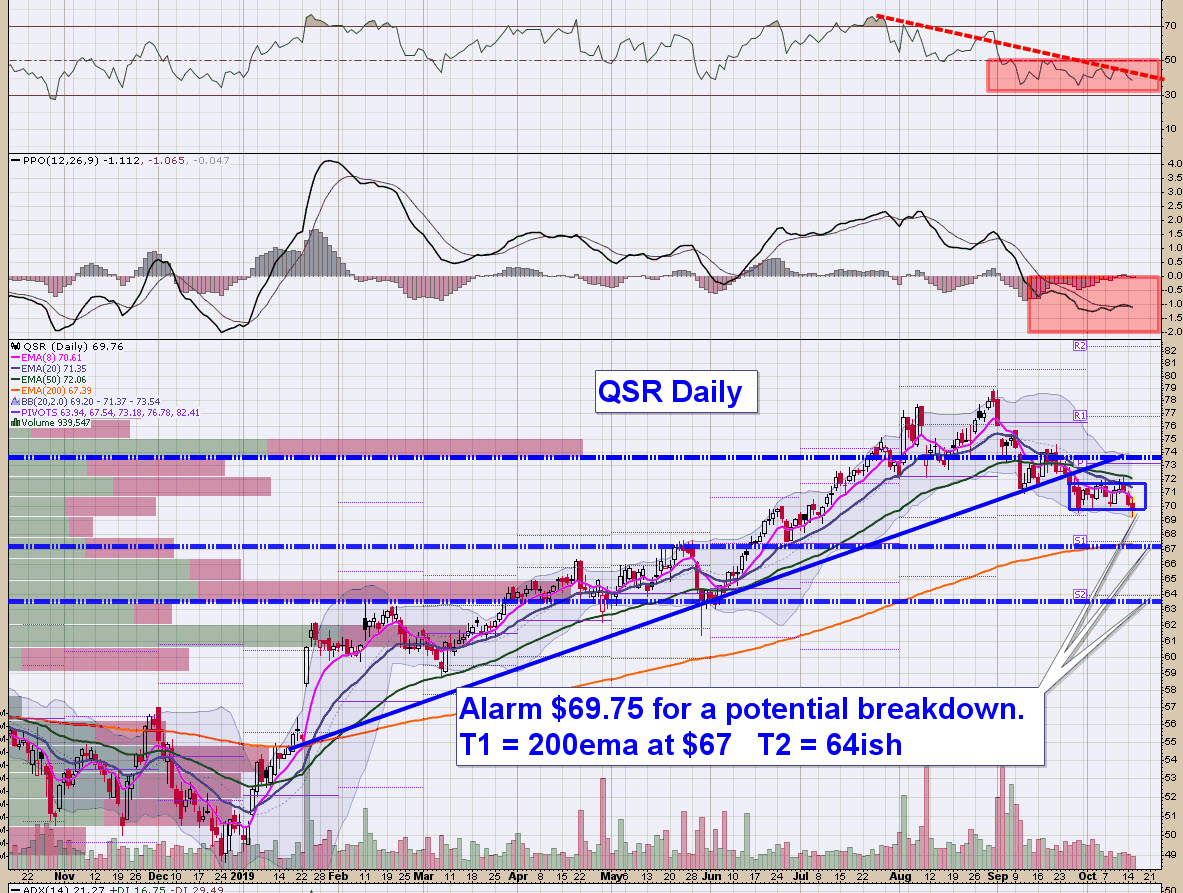 A big downtrend is testing support at $19. A break favors a move to $16. A break above the downtrend line would be a bullish development and if that happens it would favor a move to $22 where lateral resistance would come into play. Alarm just below $19 and $20 for potential entry.

Our group was able to book a double on this one a week or so ago.  With price below its uptrend line I think a move to the 38% fib retracement level at $80 is favored.  The stock is extended and a pull back would likely reset the stock. 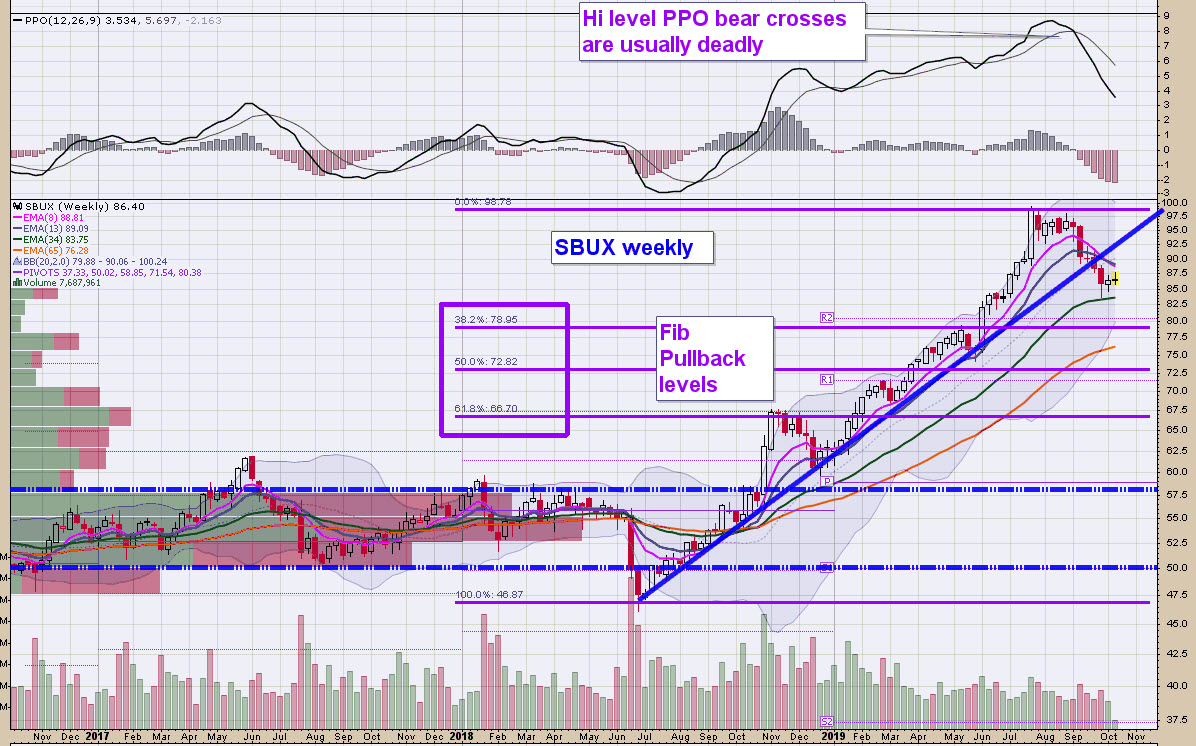 A nice chart overall, but price is probing support at $87.50. Stay long against that level, but if it breaks, a move to the main uptrend line would be favored, possibly even as far as a tag of the 200ema.

Yuck! A big downtrend pressing against support at $49. A break favors a move to $42. Set yourself an alarm. Not interested in a long unless / until the down trend line is broken to the upside.

Productive chart with a gap to fill. Trader’s can be long against the gap opening with an eye on a gap fill .

Whoops!  Price lost the nice uptrend and is now vulnerable to further downside. A move to recapture the uptrend would be a bullish move and a nice entry for a long.  Motivated sellers can be short against the uptrend line but its been a strong stock. That may end up being a frustrating trade if th broad market remains strong.

A sweet multi year uptrend coming off the channel high.  A break of $110 would favor a move to the low side of the channel where I’d be a motivated buyer with a stop just below.  What’s nice about the chart is the rising 200ema just below the channel as an added layer of support.  Nice steady gainer.

A productive looking chart to my eye with an ascending triangle. I think interested traders can be long against the uptrend line with a stop just below. With some luck you might get a breakout.  Any dip below the uptrend line would be your exit.